For more than a year, I haven’t yet subjected platinum to an intense trend analysis. No wonder, mainly the metal swings for years totally boring in a sideways channel measuring about 150$.

The very last really important GUNNER24 Buy Signal for platinum in the monthly scale was sent in the first half of 2016, the last notable bearish signal occured in the second half of 2016 after the important 2016 countertrend high that has tested back the "round" 1200$ Gann resistance number in a negative way.

==> The most recent developments now indicate that the metal has a round about 100$ rally ahead of it. The very last confirmation for this upcoming advance in the monthly chart is still missing, that`s why the best tactic currently seems to be to place selected buy-stops above the current price.

Let's start today's analysis with the weekly chart and the weekly momentum which has taken the position to overcome the 1030$ resistance horizontal in a sustainable way: 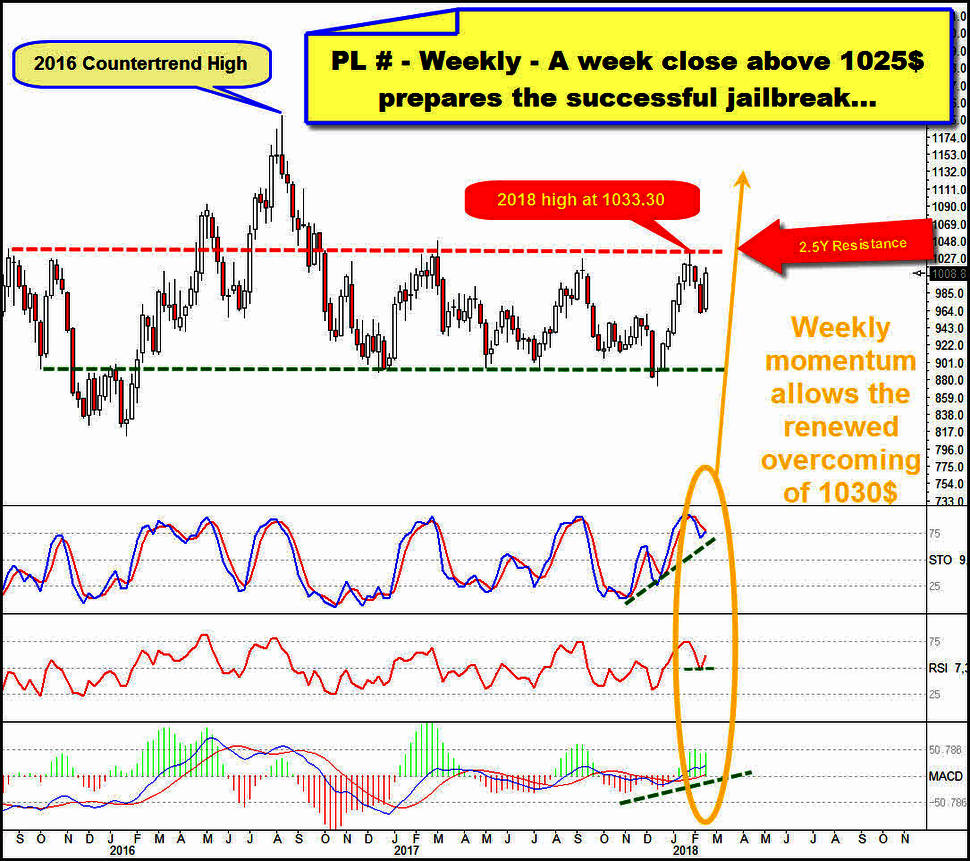 Although the hitherto quite healthy-looking bullish momentum suggests that this time it would be possible to overcome the 1030$ in the long term, of course there is no security for that. Platinum could also bounce off the 1030$ horizontal at the upcoming test and stay in the boring sideways channel for the weeks and months to come!

In order to see what "hidden" tension the metal is currently exposed to and why the sustainable 1030$ breakthrough should be achieved in the near future, we need to switch to the monthly chart and examine it using the GUNNER24 Method!

Monthly platinum setup below starts at the January 2016 Bear Market Low but is not correctly adjusted upwards, this intermediate step helps to deduce the currently determining Gann Angles which originate directly from the most bearish extreme of the platinum bear market: 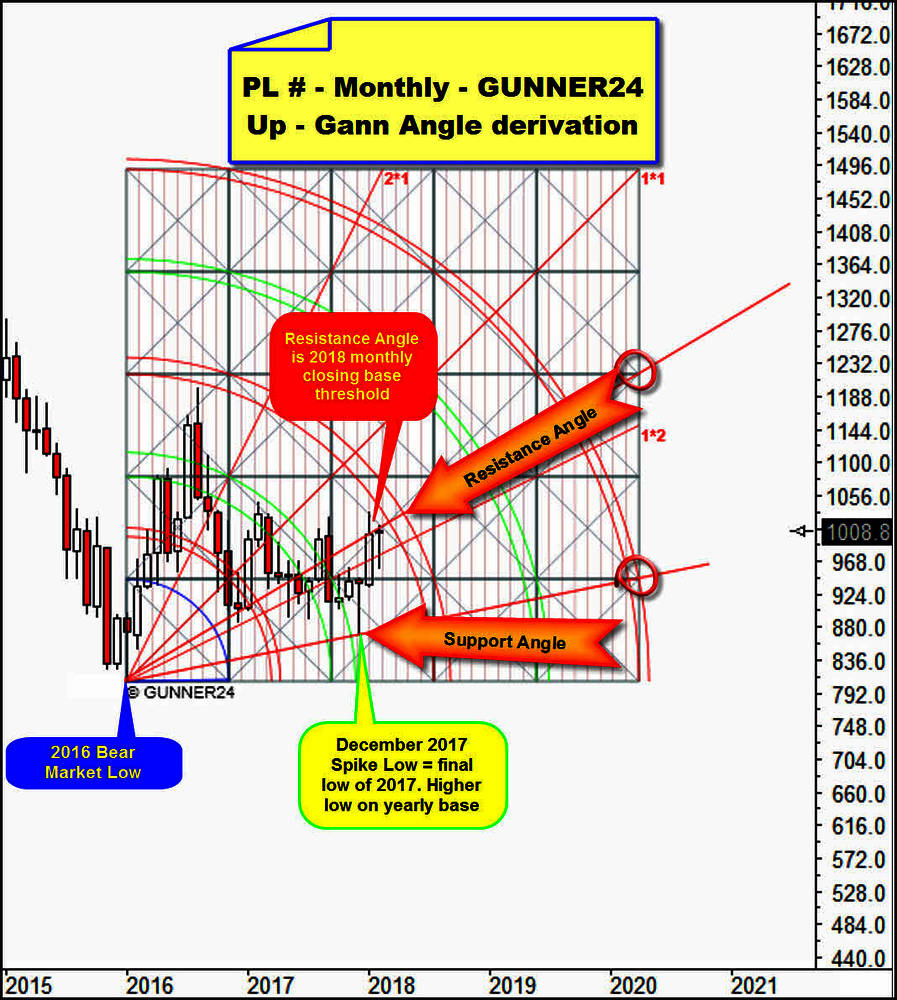 The December 2017 Spike Low, the final low of the last year, tested extremely accurately and very successfully the at the lower right end of setup anchorable Support Angle. Because this final year low was a higher low than the 2016 Bear Market Low the Support Angle is fully confirmed rising support in the yearly time frame. Support Angle is now strongest future support and a monthly close below Support Angle is a very strong bear signal, activating some lower bear market lows.

The angle anchored at the middle right end of setup acts now as rising angle resistance on monthly closing base. The January 2018 closed shy below that threshold. Current February candle could barely exceed him at month highs and you recognize that the metal was again held back by him on Friday.

Below supports Support Angle because it is able to produce higher lows in the yearly chart. Above brakes the Resistance Angle.

==> The fact that the Resistance Angle prevents the further increase both at January 2018 close and currently shows us that the monthly time frame tries quite hard to take the angle upwards. After all, the last important upcycle began at a higher low in the yearly time frame...!!!

==> Thus, both the monthly and the weekly time frame are knocking hard against their main resistances.

Ok next. In the next step we adjust the setup correctly! 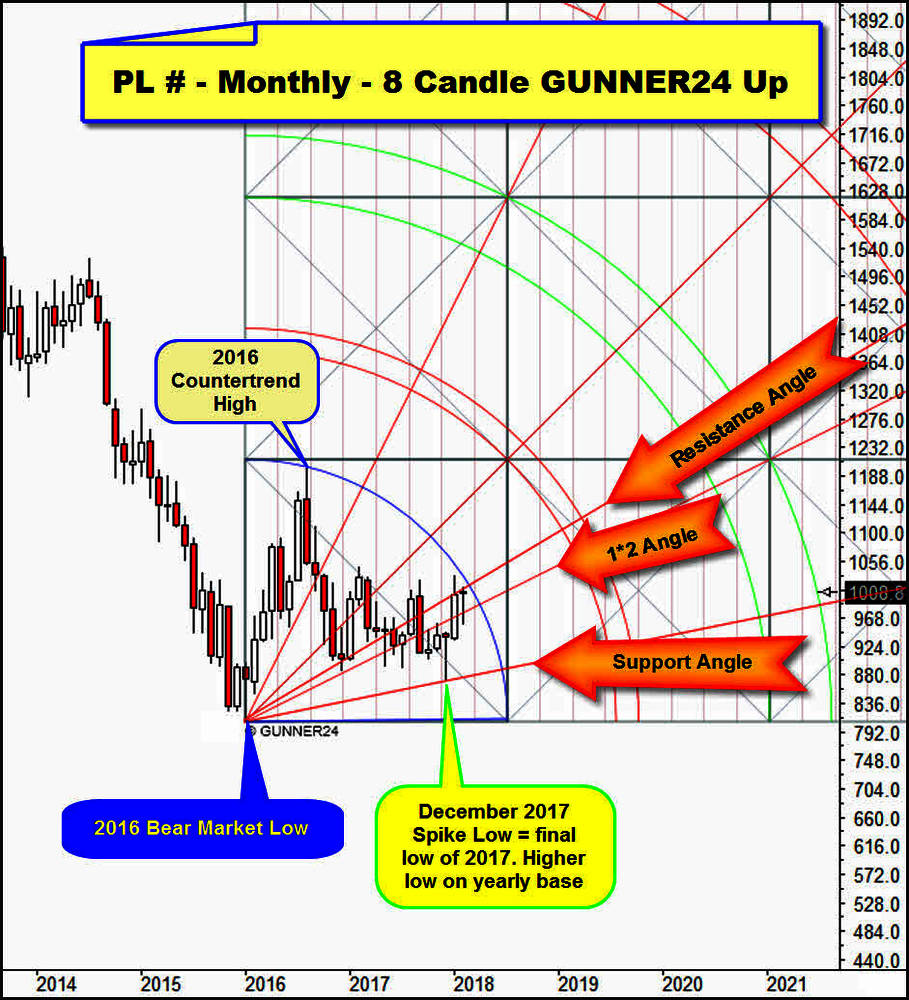 By pulling it up to the important lower bear market high of the year 2016. This results in a "classic" 8 Fib number candle up and we recognize that the metal has not managed to leave the first square. Its in a sideways trend.

Quite bullish is the fact that the platinum future has re-conquered the 1*2 Angle with the achieved January 2018 close. The next important GUNNER24 Magnet that the metal has in front is the Blue Arc. The Blue Arc has never been tested. Otherwise there is not much more certain to determine.

Nevertheless, it should be noted a conspicuousness. And I love such subtleties. They are the salt in the soup of analysis or prediction.

==> The January 2018 highs and the current February high seem somehow linked, because they are very close to each other... And this conspicuousness leads to this possible situation: 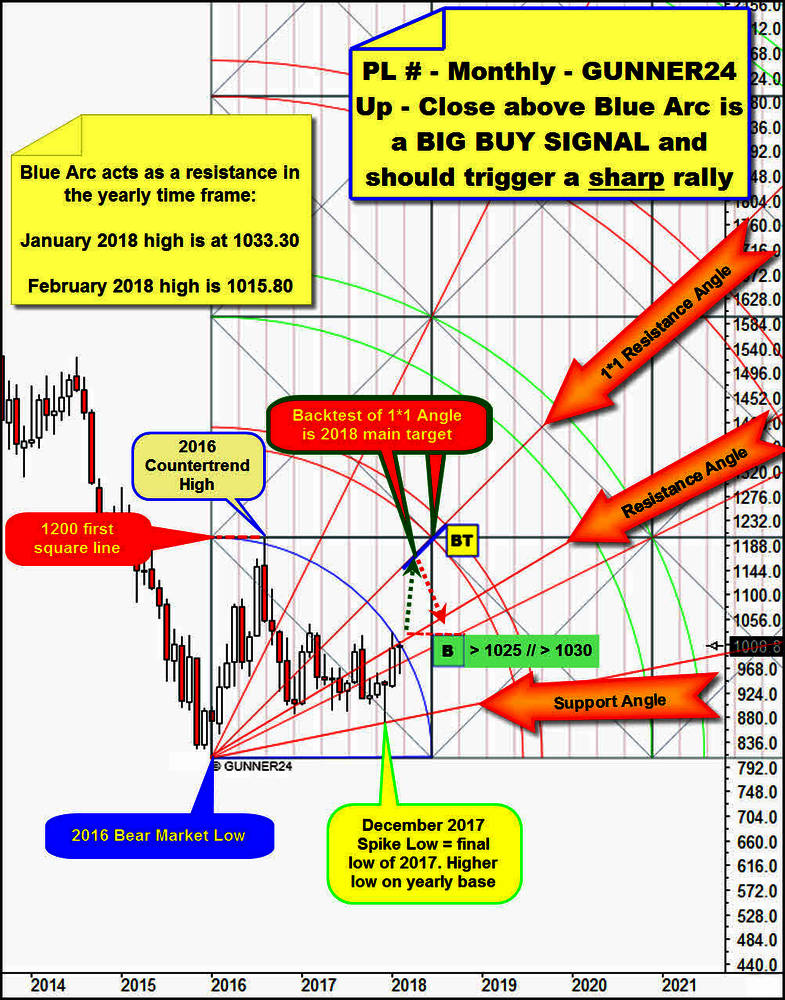 The 2016 Countertrend High at 1200$ thus represents the first square line resistance, which is always in direct mathematical connection the circular Blue Arc. And since the 1200$-first square line means annual resistance, the received January and February 2018 highs are also likely to be triggered by resistance existing in the yearly time frame = Blue Arc. The highs of the two trading months of this year have been triggered by a year resistance.

==> Thus, the yearly as the monthly and additionally the weekly time frame are knocking hard against their main resistance/resistances. Platinum is at combined weekly, monthly and yearly resistance magnet.

And so, we can imagine very well what will happen when this incredible strong resistance magnet is taken upwards. In this case a severe - a massive short-covering - rally should follow which should chase the metal within just a few trading weeks into the backtest of the 1*1 Angle.

Depending on when the/a short-covering rally starts, at least a quick plus of 100$ is likely for the bulls until the 1*1 Angle will be reached/tested. I doubt that the metal can run much higher than the 1*1 Angle during an upcoming short-covering rally since this angle represents the next higher yearly resistance above the yearly Blue Arc resistance.

Actually, every upwards trend that the year 2018 has in the quiver should end at or near the yearly 1*1 Angle resistance. A test of the 1*1 Resistance Angle offers the outcome that there the final high of 2018 will be made.

Well, as already highlighted at the beginning of today's forecast, the existing bull market momentum allows the fast overcoming of the current main resistance magnet which for February resides between 1016$ and 1030$. But if the bulls manage to overcome this stubborn party pooper is still somehow hidden in the dark. The chances are suddenly definitely very, very good that platinum will soon start a >100$ rally cycle which could/should test 1*1 Angle at 1130$-1140$ in course of April to May 2018!