Whereas the American stock markets - according to their well-known seasonality patterns - put down a more or less powerful rally in those days from December 20 to the year-end which are traditionally low-volume days, both precious metals we consider went badly to the dogs.

Being absent any financially strong counterpart the notorious short-sellers in gold and silver could leave a lot of blood in the chart-technique-carpet undercutting (gold) or reaching (silver) the September lows that had seemed to be pretty stable:

The outlook: the stock markets are expected to tend upwards as early as the first week of the new year – and then turn down. Gold and silver: The first trading week in January will decide whether the long-term upwards trend in gold will continue, newly reaching the 1900$ soon and whether silver will newly target the 40$ mark or otherwise head for the 22$. 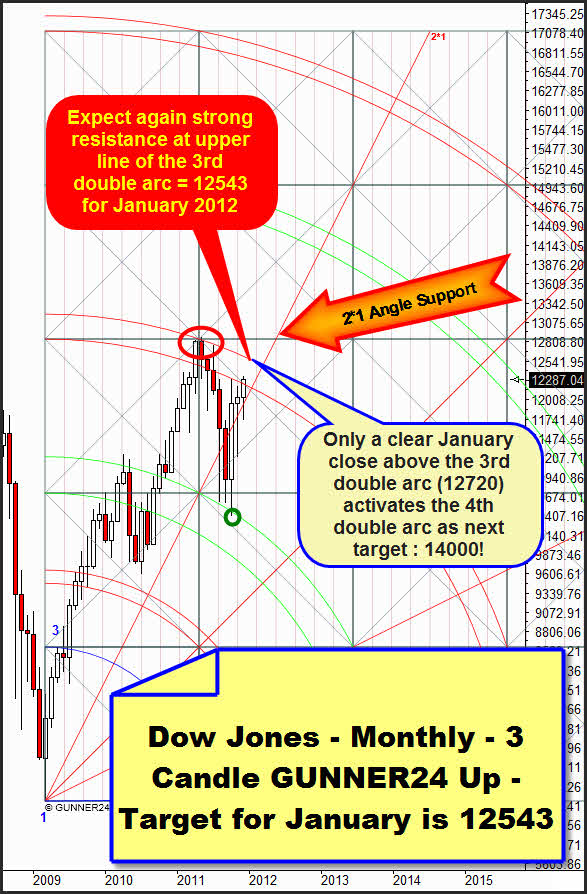 In the actual monthly 3 Candle GUNNER24 Up the Dow seems to close within the 3rd double arc for the third time. Closing prices within the important double arcs – in this case it’s a very strong resistance double arc – always indicate that the market technically wants to head for the next higher double arc (in case of up setups). So to speak they suggest that the trend will continue – whenever such may happen. The 4th double arc – at 14000 – won’t be activated as to be the next important monthly target before we’ll see a monthly closing price above the 3rd double arc (for January from 12720). After re-conquering the very important 2*1 Gann Angle for the third time December will close within the 3rd. 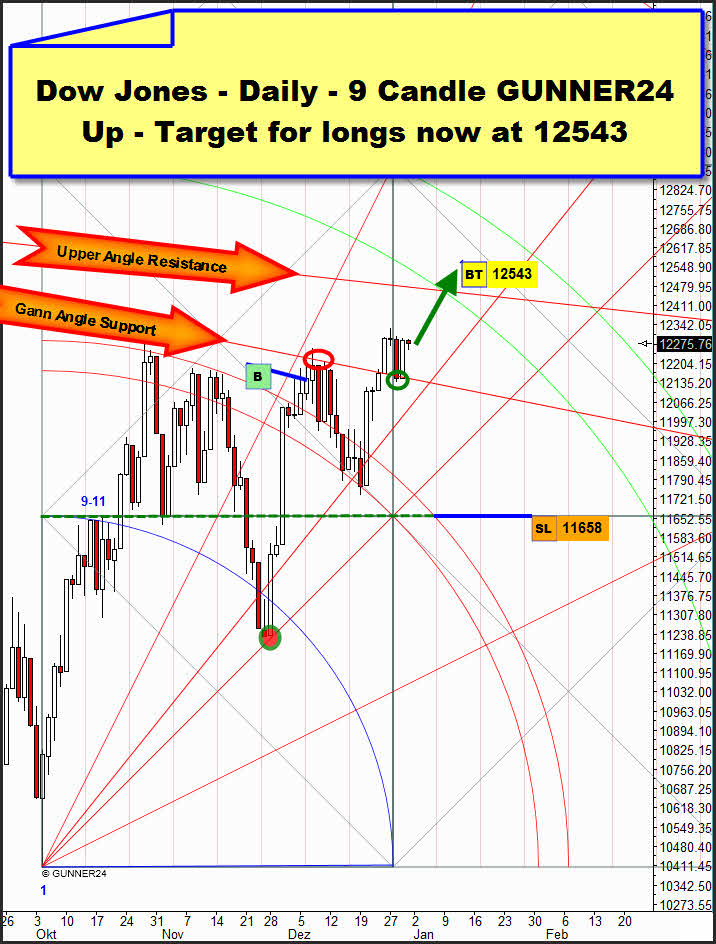 As expected in the last issue the Dow did start the Christmas and year-end rally from its consolidation area – the first double arc - after all. At the moment it is consolidating above an important Gann Angle which comes from the 2011 high. It is going to head for the 2nd double arc until January 9, and since we are rather positioned at the end of this swing it will target the 12543 only for a very short time. So to speak it will spike from it violently. Such a conduct is indicated by the existence of the Upper Resistance Gann Angle that comes from the 2011 year-high as well. Also because of the natural resistance of the 2nd double arc it is just very difficult to be overcome on daily basis (closing price). Maybe the market won’t be able to last more than 1-2 days above the Upper Resistance Gann Angle before it turns down.

Just before Christmas, around 12/20, five metal traders of JP Morgan, three of Goldman Sachs and a couple of European metal traders (Deutsche Bank and a Scotsman) communicated by e-mail deciding: "Hey, those days until New Year we’re sitting around in front of our desks, all our hundreds of colleagues are in their well-earned holidays, and only we aren’t – damn it! Why don’t we just try something? Since we’ll have to be sitting around anyway we should be gilded for that unstintingly… Let’s make gold and silver fall, collect fat bonuses with our planned short-attack having a lot of fun – we’ll certainly have – anyway there’s nobody who’d be able to take us on." Ok, no sooner mailed than done…

That’s how the story might have happened. By the market potency of the Big Banks a few traders achieved to shatter all the supports without any resistance because a lot of the potential counter-parts were – or still are – on vacation. They’ve produced a new silver double low put in panic every gold and silver bull… And the best is: perhaps they’ve built up one of the biggest bear traps of all the times leveling powerfully their shorts down at the lows yesterday and of course turning their positions.

Yeah, bear trap, that’s how it smells. I am a clear advocate for always referring to the volume when it comes to the meaningfulness of movements. That was completely missing last week. Pretty few sales volume at the right time in the determined support marks were enough those days to trigger off the placed stop-losses…

Yeah, bear trap this is the way it is looking like at the moment, because everything depends on the closing price of today – at least in the case of gold. 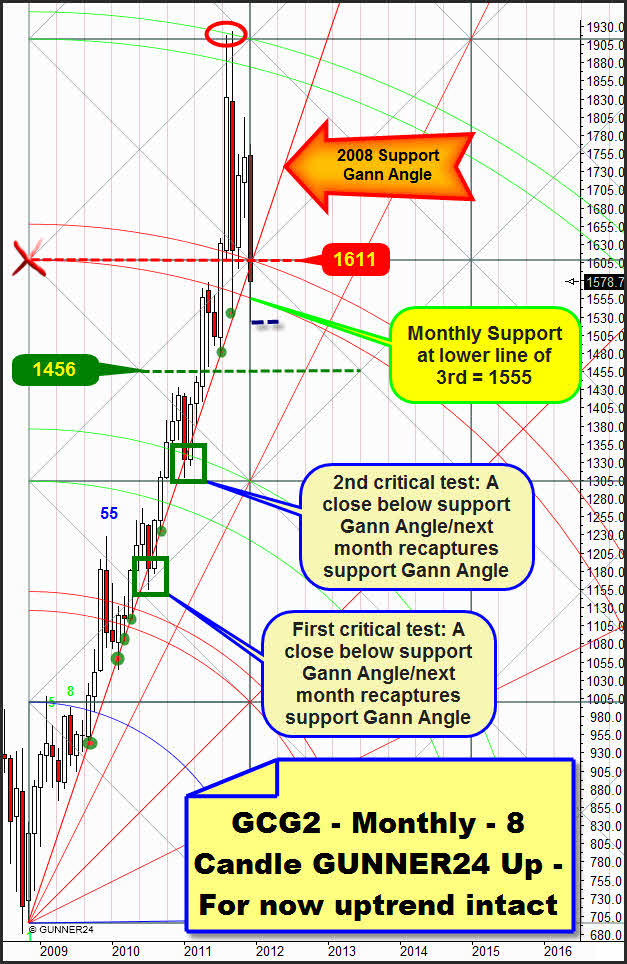 Without many words here is the weekly 19 Candle GUNNER24 Up, presented for the first time in this issue: 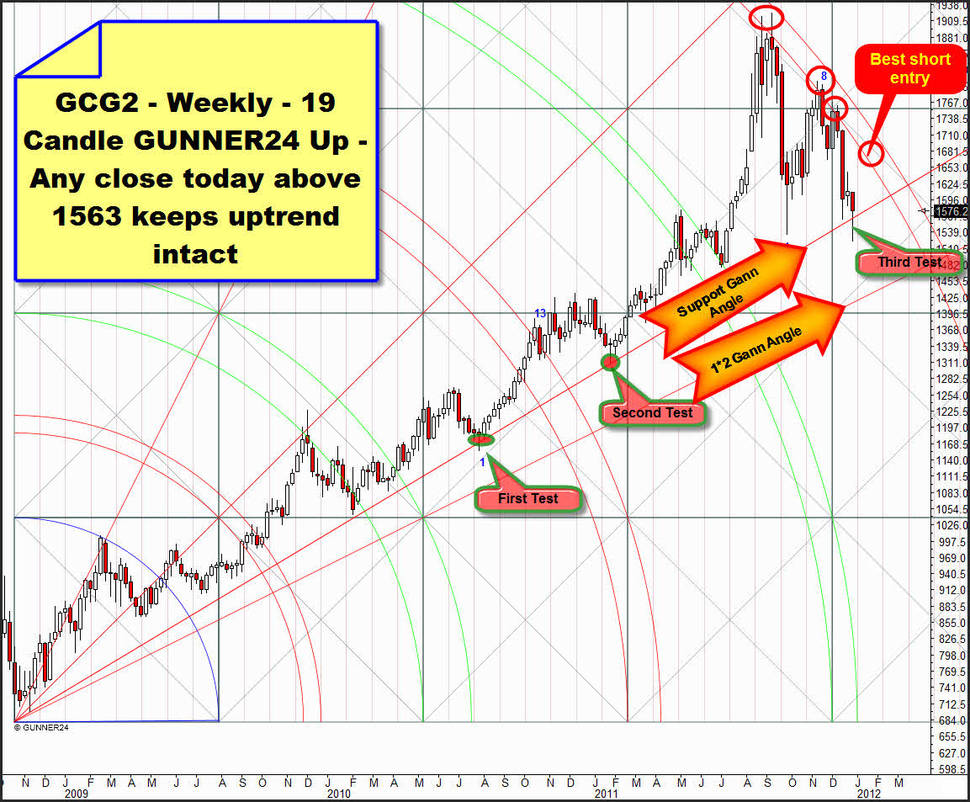 Gold is fighting for the weekly support Gann Angle. The third test is actually taking place. And this angle won’t be clearly broken before we’ll see a closing price below 1540. Each closing price above 1563 will just show a deeper test of this angle. In case today doesn’t happen anything next week is expected to be decisive I think. Next week will have the normal trading volume again deciding definitely whether the lows of today will be significant.

If the support Gann Angle is broken significantly the following scenario will be expected to come about – the ABC correction until 1450 we sketched in the issue of 12/18: 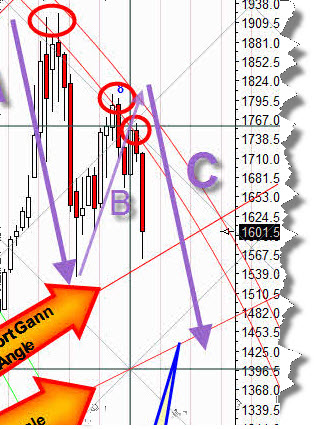 In silver happens the same – a low trading volume is sufficient to release a significant sell-off – but unlike in the case of gold yesterday no new lower low was produced. At the moment it rather "smells" like a double low on monthly basis. 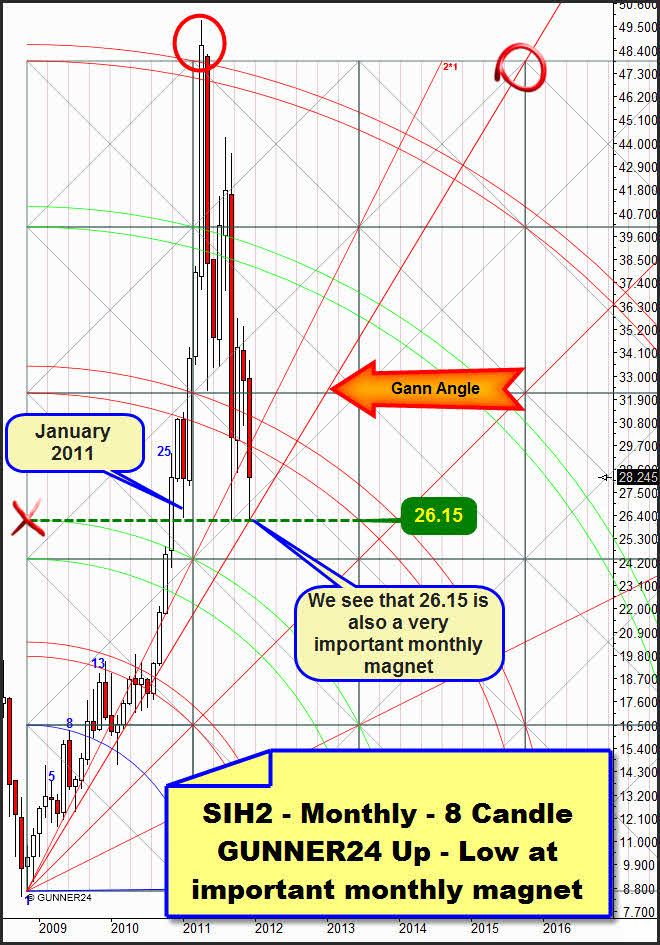 September and December 2011 touched down at 26.15. Yesterdays low was formed exactly at an important magnet (intersection point between the horizontal support line and the Gann Angle anchored in the setup above). Magnets can either stop the trend or turn or accelerate the trend, respectively.

The reaction to the yesterday low rather indicates that this magnet has a strong rebound function. Within 29 hours silver rose from 26.145 to 28.46. It was a plus of more than a 8%.

Including now January 2011 that had its low at 26.30 we can certainly assume that the 26 area will produce a very strong support. If silver makes a lower low (day closing price below 26$) next week when many more market participants will decide where the long-term trend will go we’ll be able to work on the assumption that the 20-22$ area will be targeted in the medium term (2nd double arc).

On the other hand that possible double low on monthly basis opens the end of a clearly visible ABC correction from the highs of April 2011. In that case we might expect new all-time highs in 2012! Exciting…