Blood in the streets and tears in the eyes

The development of the precious metals took the breath away of every gold and silver bull – how is possible that our absolutely "safe" assets can be beaten down so savagely in the monetary sphere where the trouble is brewing at the moment?

The Europeans sell their gold in order to buy "hard" dollars. It’s really a joke, but the European banks need liquidity to survive. In addition, many market participants had to cover for safeguarding the accumulated profits on yearly basis in gold. The keyword is window-dressing. And we’re not talking about the panic that would capture the markets just in case.

The longs in gold and silver on daily basis we went in at the beginning of December were complete flops (thanks heaven the stop-losses were chosen in such a way that the worst could be avoided). So was the speculation on new all-time highs through January/February by virtue of the GUNNER24 Setup Constellation and the positive seasonality – well-known for decades. It’s a divergence that has to make us very contemplative.

In the harsh reality gold is currently balancing at the cliff-edge confirming the medium-term down trend. And I’m not very amused, for that means that in foreseeable terms the further sell-off of all the commodities/stocks and a deflationary scenario like 2008 is threatening.

But that hasn’t occurred yet: 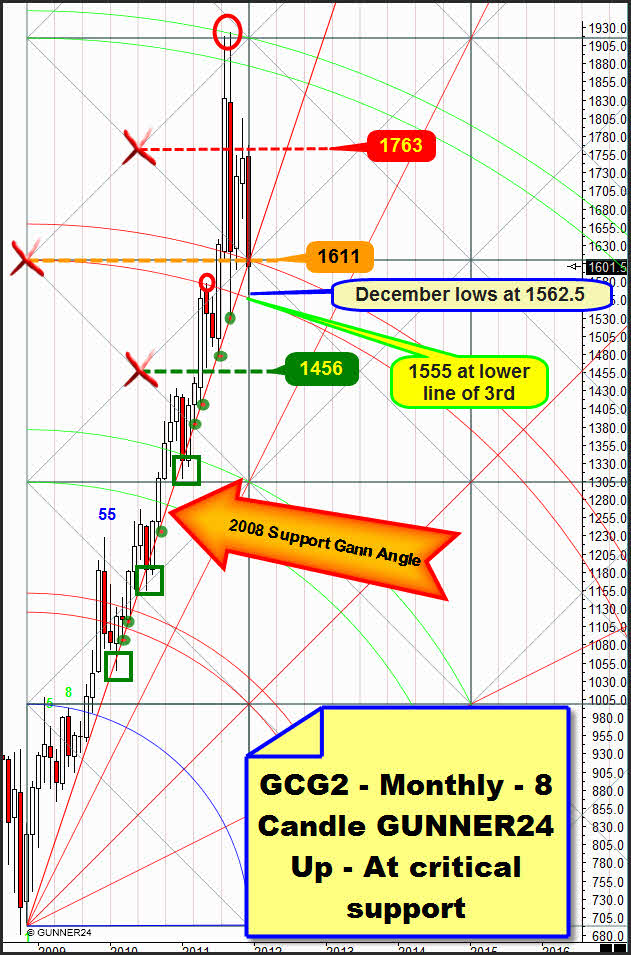 As announced here, last week we bought a monthly long-position at 1611, just at the support Gann Angle assuming that the market would turn there forcing us to act in the trend direction - according to the motto "the trend is your friend"! Unfortunately, for the fourth time gold favored a "critical test of the support Gann Angle". According to W. D. Gann the 3rd and the 4th tests of a Gann Angle are the decisive ones for the continuation of the trend. Ergo this test is supposed to be the most important one. It decides whether the upwards trend goes on or gold ends up in a medium-term downtrend.

If this support Gann Angle breaks, well, in that case we can say good-night. And there is certain evidence saying that this time it might break. At the moment December is showing one reversal candle. At 1600 the candle is in the critical zone of the 3rd double arc. Whoever applies MACD and Stochastic, RSI or Bollinger will see that the monthly values are staying in the oversold area or pointing downwards. So, they’re also very, very critical…

We will finally be able to assume a successful test of the support Gann Angle if December just closes above our long-entry at 1611. Maybe that’s going to be the new starting signal for the 1900.

So, from the point of view of the monthly GUNNER24 above it is important that during the last two trading weeks gold A)keeps spiking visibly from the support Gann Angle and B) closes again pretty clearly above the 3rd double arc. A December close above 1650 would be ideal, in that case I would work on the assumption that gold holds on to its long-term upwards trend!

But at the moment the price conduct is showing the definite low for December because the gold price was quoted within the permitted frame, below this support Gann Angle. So we might have seen the final December low at the 1562.5.

Though a December close below the support Gann Angle – maybe at 1540 – makes the horizontal support at 1456 become the first target. The next battle would be fought there. A possible final target after a break of the 1456 would be the 2nd double arc at 1320 in that case…

Let’s go now to the 1555 support at the lower line of the 3rd double arc that is marked above.

About that, here is the long-term weekly 19 Candle GUNNER24 Up: 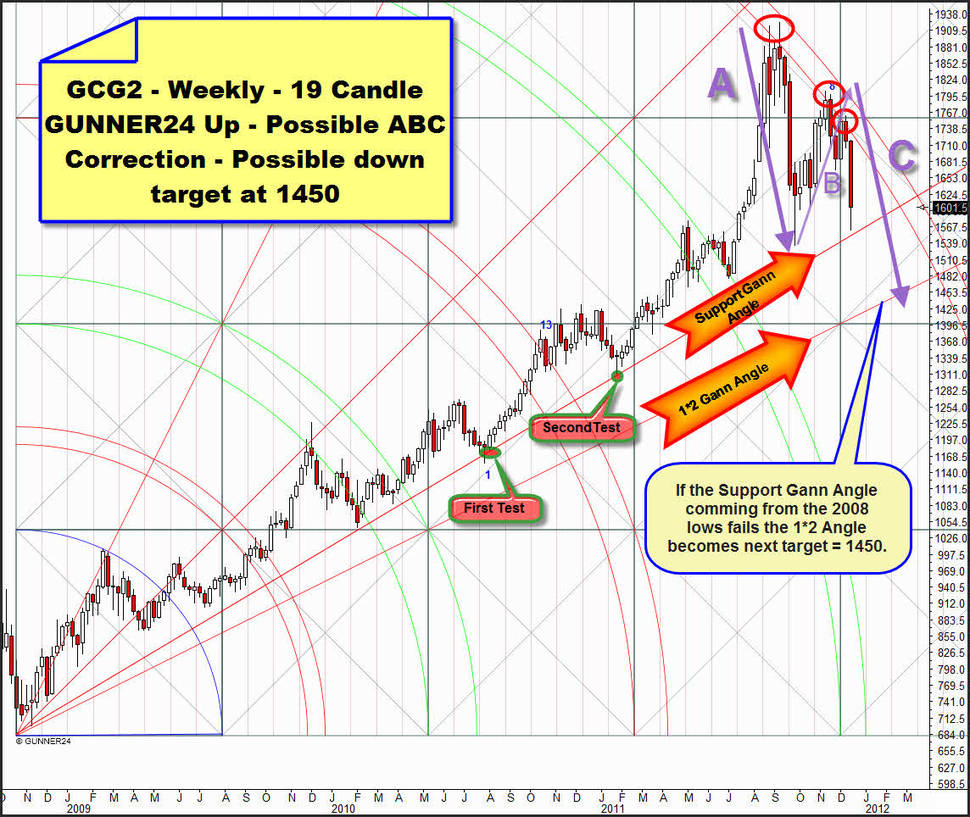 We see that the main target (5th double arc) of the 19 candle initial impulse was reached with the 1900 highs. Last week’s sell-off confirmed that the 5th double arc is not going to be broken so fast and that now in the long term the down pressure of the 5th double arc might obviously bring to its knees the up pressure that has developed since the September lows. The weekly support Gann Angle is the last resort and the last stop point indicating that the upwards trend will continue. The 3rd test is threatening. If the test of the support Gann Angle comports the same way as it did in test Nr. 1, gold will be allowed to dip below it briefly. For next week the support Gann Angle is lying at about 1558. A dip below that to 1555 to 1550 is corresponding to the lower line of the 3rd double arc in the monthly 8 Candle GUNNER24 Down.

Will the 1555 resist next week or will the support break? That is the exciting question. A break next week is possible (I think a weekly close below 1540 would mean the CLEAR break). As you can see above an ABC correction might follow. If C=A comes true gold will collide with the 2*1 angle at 1450-1460. That would meet the next lower monthly support in the monthly 8 Candle GUNNER24 Up!!

Experience has shown that the low of last week is due to be tested again relatively quickly. I can’t imagine that a confirmation of the 1562.5 should not happen – after such a violent sell-off.

A daily setup is pointing to the fact that gold will head for 1520. 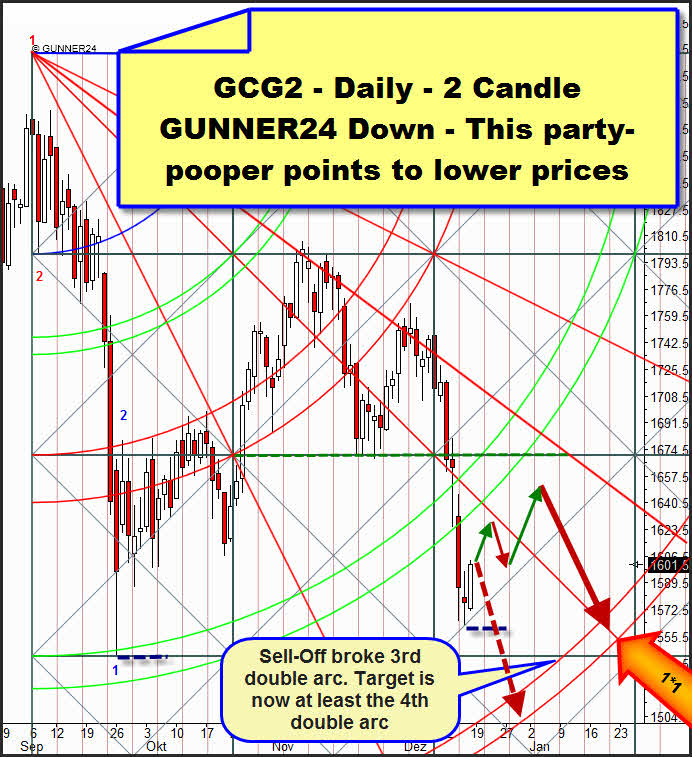 Since with the sell-off of Wednesday the 3rd double arc was clearly broken, now the 4th double arc is the target, with a 70% of probability. The question is now when gold will touch down there or even break through. Since on Friday a reversal candle was produced, now the 1*1 can be headed for. If on Monday the reversal goes on, the 1630-1640 will be expected as to be the high for next week. I think some resistance is expected to begin there leading to a new test of the 1600. Then the 1*1 is supposed to be broken upwards and after the 1660 through the first week of January the 4th double arc at 1570 is expected to be tested newly (green/red arrow combination).

It really depends a lot on the timing how long the recuperation from the low will last. If the market turns again downwards at 1603 or 1610 tomorrow or at the beginning of Tuesday there’ll be a risk that as early as next week even lower lows might occur. At least 1555… what could happen in that case – see it above (broken red arrow).

What does silver say on daily basis? There are likewise contradictory signs.

On the one hand it´s very likely that the lows in silver have been reached: 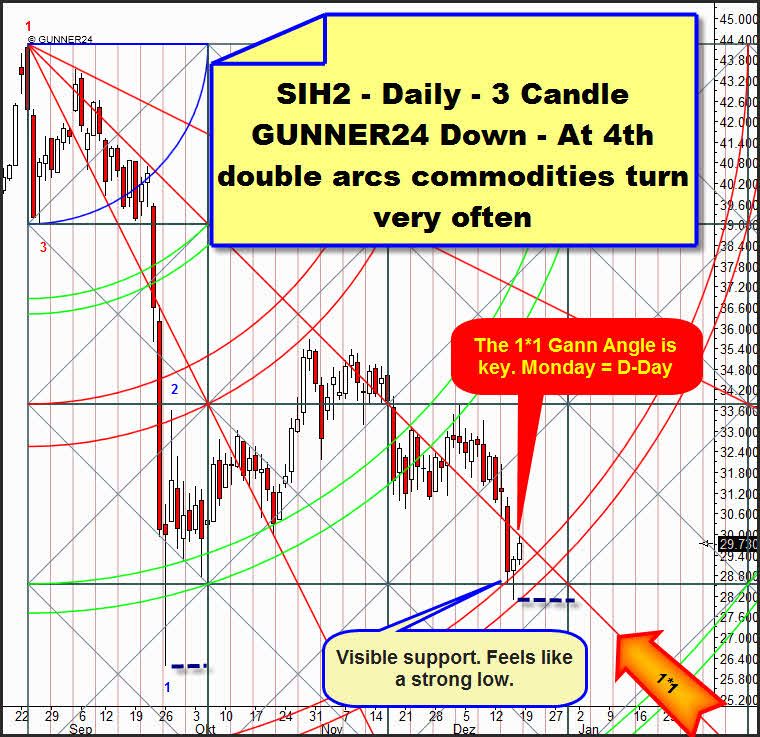 The actual daily 3 Candle GUNNER24 is showing that the main target – the 4th double arc – was reached. We don’t see any closing price within the 4th, also the spike-down conduct of the 4th is looking good. The 4th is giving visible support. The problem is that the Friday high was reached exactly at the 1*1. It is indicating a resistance. But we’ll have to wait for Monday to see whether it is sufficient to release another down spiral. Silver has been oscillating around this 1*1 for weeks being drawn down by it. A Monday close above the 1*1 would facilitate a recovery until 31$, which is the break mark out of the ominous triangle formation. There a kiss of death is threatening.

This silver daily GUNNER24 Up indicates that silver like gold continues being under a strong pressure: 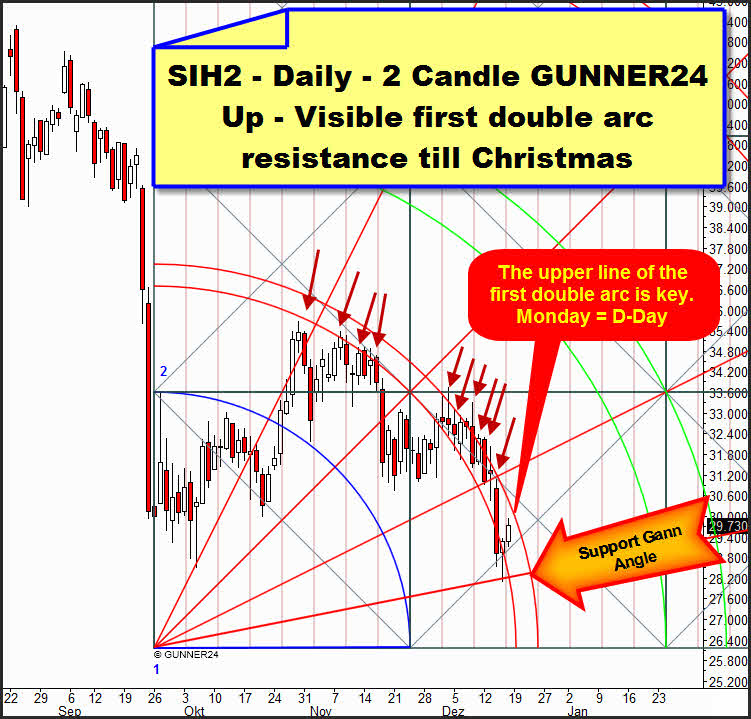 Since the end of October silver has been in the negative sphere of influence of the first double arc in the daily 2 Candle GUNNER24 Up. This influence will theoretically last during the whole week. Since the low is backed by a support Gann Angle, in fact a final low might have formed. As analyzed above on gold, Monday and Tuesday will be critical. Especially Monday reaches again the upper line of the first double arc which might stop the two day recovery brutally forcing silver (and naturally gold as well) to new lows.

The Friday high is at 29.93. A higher high here on Monday is expected at 30$ because that is where the upper line of the first double arc passes. There at the 30$ the decision will be made whether the market wants to go down again immediately on Monday or – in case the 30$ are clearly taken silver will go high to 31$ until next Wednesday or Thursday. That would correspond to the 1630-1640 in gold.

Let’s go briefly to the stock market. I think here, too, that Monday will be decisive whether we may still expect the Christmas rally. 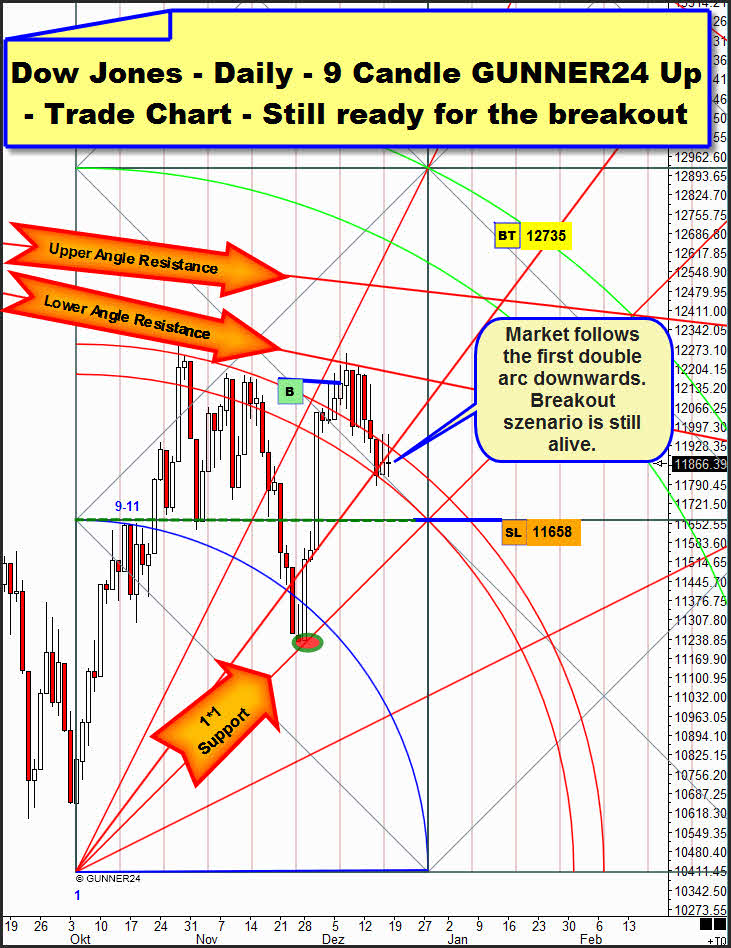 Whereas the S&P 500 and the NASDAQ-100 and the DAX are rather pointing to the probability that the rally this time will not happen, more likely they want to turn down a little more – the Dow Jones is the only one of the indexes I analyze which does indicate the rally. It goes on consolidating on a high level closely above or within its supports pointing to a possible blow-off. The longer the first double arc retains it the more explosive a break-out upwards will be (of course a sell-off as well).

We receive mixed signals or rather extremely negative surveys as in the precious metals, all in all. Whereas until the week before last everything was in the rally-mode in terms of the charts, the seasonality and the GUNNER24 Setups – last week the picture has deteriorated extremely. How comes?

The reason is the expiration week that ended now. Some extreme manipulations are taking place where the banks or this week even the Central Banks intervene to make rise and fall the markets onto determined price marks. And of course it’s the ones where they can make most money or fleece extremely all the other market participants who naturally are always under-capitalized.

From the psychological point of view that leads to an extreme uncertainty. Everybody asks himself: how can it fall so far and so fast, or the chart technique is actually showing that it has to rise, why doesn’t it, etc. So the banks intervene directly in the market manipulating it with no end. That leads to panic, fear and greed of all the market participants. At the end of the week the traders and analysts are frequently standing there without knowing where the trip is going to. And they’re uncertain regarding the markets and their charts…

That is why the Mondays or Tuesdays after the expiration weeks are really always very important. For that is where mostly the decision is made whether the signals generated by the expiration week are A) durable and B) are really important or C) were just a fake. So let’s wait until Monday and Tuesday to see where the trip is really going to.

The next GUNNER24 Forecasts will be published on 28th or 29th of December!