Mighty US Crude Oil breakthrough seems to be running - Part 2

On 10-22-2017, I was able to report that with the final overcoming of the Blue Arc resistance on monthly closing base in the dominating monthly 12/13/14/15 Candle up the US Crude Oil fired a Major Buy Signal which triggered the almost compulsory execution of these two bull market uptargets:

1. The first new uptarget for the at June 2017 low resumed US Crude Oil bull market is first test of 57.40$ first square line upmagnet resistance within monthly 12/13/14/15 Candle GUNNER24 Up Setup.

2. The second new bull market uptarget is the first test of lower line of 1st double arc upmagnet resistance in trend direction, with a high probability that this uptarget well be tested and be reached and tested around March 2018 and 63$.

During November, the 57.40$ first uptarget was reached and completed.

If the market succeeds in ending the entire trading year 2017 little bit above the 57.40$, this would be a very rare event, as it would lead to a double buy signal on yearly base!

==> If the Crude Oil closes above 57.60$ a massive buy signal will be generated for 2018. Accordingly, the next trading year should be another uptrend year. Also the 80$ threshold could be reached over the next year!

I would like to prepare you for this mighty powerful Inflation Signal already emerging because today's issue is the last of the year, and the next GUNNER24 Forecasts won’t be issued before 01/07/2018, since the coming two Sundays will fall on holidays and experience has shown that, after the turn of the year, most attention must be paid to equities and the precious metals sector in order not to miss a vital signal: 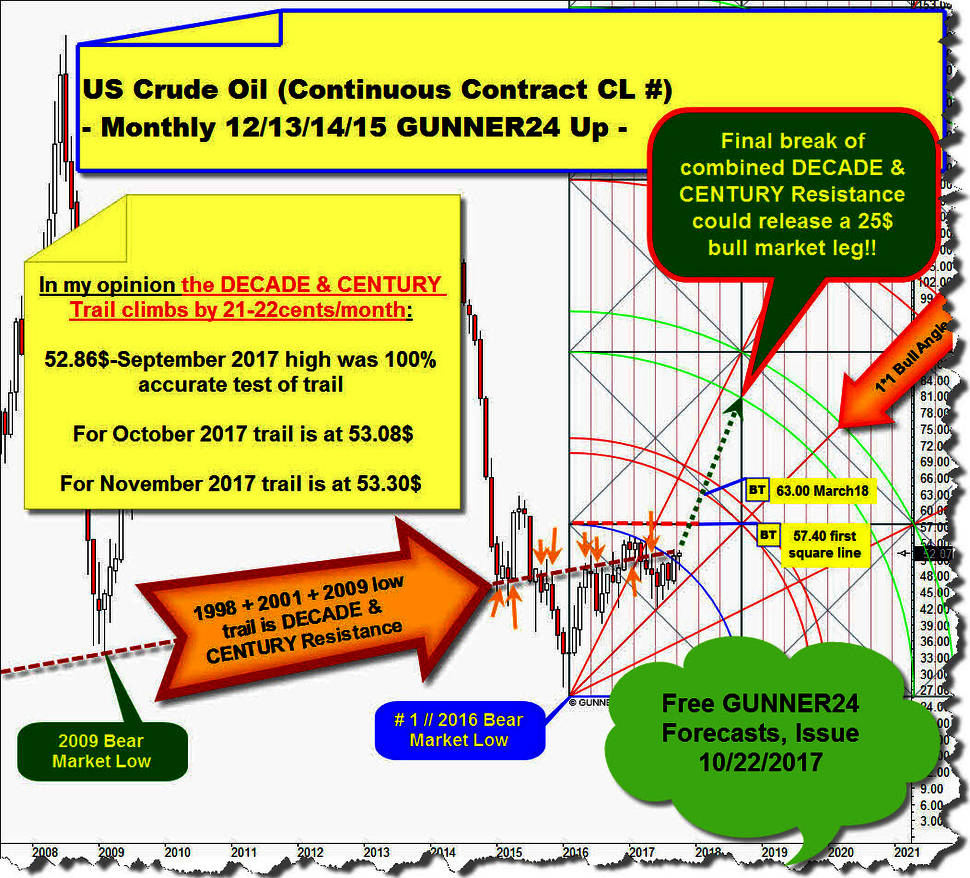 Because September 2017 for the first time closed above Blue Arc resistance which was most dominating resistance for entire year, the oil was expected to hit monthly 57.40$ first square line resistance. 57.40$ first square line bull market uptarget was worked off in course of November 2017 and market advanced into 2017 high which is at 59.05$, then ending the month of November exactly at 57.40$: 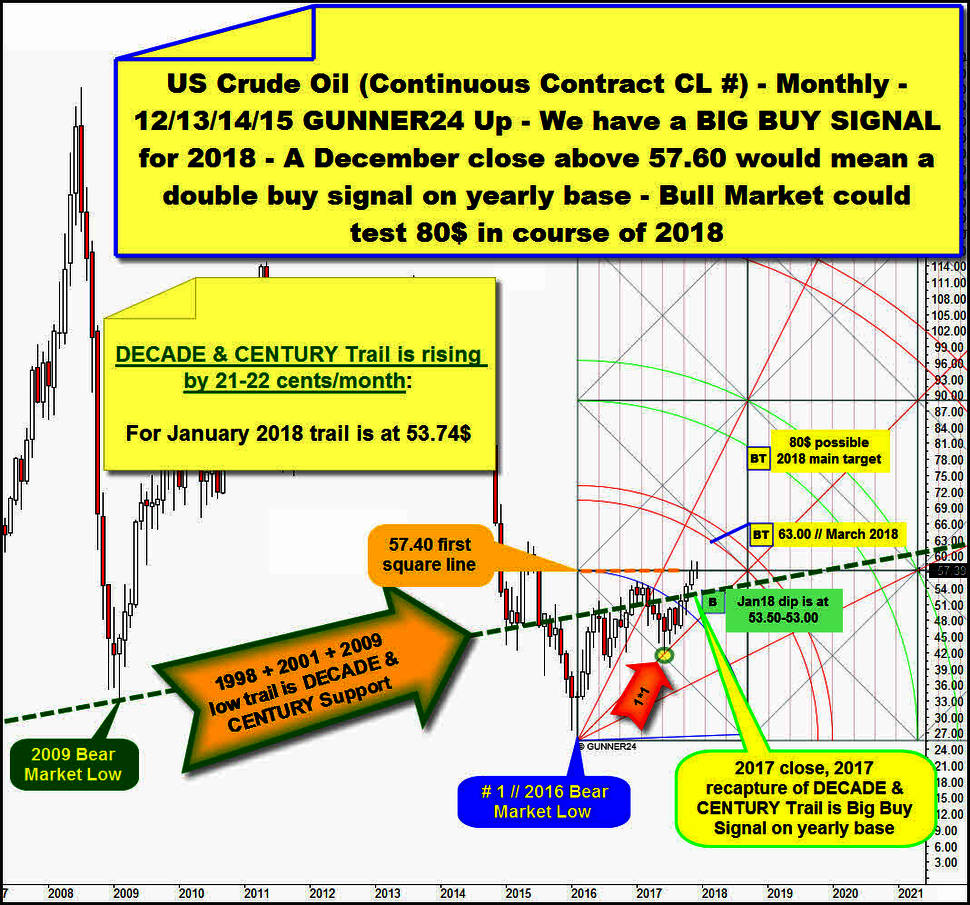 Thus the last candle closed exactly at the pre-calculated first square line uptarget which is natural Gann target out of year 2016 Bull Market Low. November 2017 close was exactly at very, very important horizontal resistance, existing in the combined monthly and yearly time frames. And now note what the December 2017 candle tells us:

December 2017 opened above 57.40$, although only just above (57.42$), but this auction is a clear bullish signal in the monthly time frame because time skipped a price threshold which is important for 2017 and beyond. Another bullish exclamation mark, suggesting that the upper line of 1st should be tested within this bull run!

What is also striking is that the oil takes the importance of the 57.40$ magnet to heart as it finishes the week at that particular point of interest. Thus, the 57.40$ is important for the weekly, as well as for the monthly and also for annual time frame.

Because we now recognize what the currently most important oil price is, it is also possible - quite simple and logically - to derive the current signal state on monthly & yearly base!

==> If the oil finishes significantly above the 57.40$ threshold in 2017, it fires a buy signal in the annual time frame! I think that a year-end price above 57.60$ is enough to trigger that yearly GUNNER24 Buy Signal!

With the possible skipping of the first square line resistance in course of December and year 2017 close very massive upward forces should finally develop, so that the processing of the activated lower line of 1st could take place already in the month of January 2018 = crude could start a very strong rally the next few weeks!

==> Next higher previously activated bull market uptarget in the monthly above the 57.40$ first square line pivot is the lower line of 1st double arc upmagnet resistance. The probability that this monthly upcycle is strong enough to work off the lower line of 1st at 63$ environment until March 2018 is strongly rising and now about 80%!

The main reason why at least the processing of the lower line of 1st double arc (perhaps at 63$/March 2018) in the currently underway yearly upcycle should be due is the fact that the year 2017 FINALLY will be able to recapture the mighty resistance of the rising 1998 + 2001 + 2009 low trail which is resp. WAS resistance in the combined DECADE & CENTURY time frame.

==> The final overcoming of this combined DECADE & CENTURY resistance on yearly closing base has succeeded with a 99.9999% security, accordingly, a very strong trend continuation signal has already been triggered in the yearly chart.

If now also a year-end price above 57.60$ can be achieved, well then Crude Oil would be able to deliver a very rare and very powerful double buy signal on yearly base. Accordingly the upcoming trading year should be an uptrend year, likely printing final low near open and highs near end of 2018.

==> Nearly always when a combined DECADE & CENTURY resistance is finally overcome, unusually violent bullish forces have to unfold. The ultra-shorts have to cover for months and the new bull feeds the overall bull market and therefore it could be the case that crude oil needs a test of upper line of 2nd double arc upmagnet resistance in course of 2018!

==> The expected 2017 close activates 80$ main target for the bull market which began at February 2016 low. Until now, it looks like that 80$$ main uptarget could be tested in course of autumn 2018. The probability that the bull market can work off its main uptarget in forecasted time is currently at about 45%.

==> DECADE & CENTURY trail is now strong future support on monthly and yearly base and next test of that trail should be bought until lower line of 1st double arc uptarget is worked off. For January 2018 rising DECADE & CENTURY support is at 53.74$!

I wish you a blessed peaceful Christmas and a Happy New Year!