What belongs together is merging now. Price meets time – in December, beginning next week. In this week when the first official US interest rate rise since 2006 is most likely to be announced, some important long-term GUNNER24 Price Targets of the different key markets join together – through this year-end – forming the Big Picture.

In a compact way, illustrated by many charts, I’m going to show you today how marvelously concentrated to December and condensed are being worked off the GUNNER24 Bear Market downtargets in the key commodities that partially have been prognosticated for more than a year. We may link that with the decisive battle in the stock markets officially beginning on Monday and being supposed to continue till the last trading day of this year.

Is yet the parabolic rise into the last important bull market high at the stock markets – I notified - going to take place that is timed for January 2016? Or will the FED give the final death blow for the entire Western stock markets with its FOMC statement on 12/16?

Let’s begin with the first two puzzle parts, the currently most important two markets in terms of shortterm signaling at the Western stock markets. Then, we’ll add crude oil, silver, gold and platinum getting this way to the Big Picture step by step.

The most decisive and certainly wildest 3 weeks for years are beginning on Monday! Tuesday and Wednesday, the FOMC meeting will take place, Friday will be triple witching day. Key market No.1 of the Western stock markets is the NASDAQ-100. Just forget about Dow Jones, S&P 500 and the other broader US stock markets. The NASDAQ-100 is the key to everything that is going to come up and to happen!

As early as last Sunday, I presented this extremely important decade support arc of the NASDAQ-100 in the free GUNNER24 Forecasts. This arc is the most important support of all the stock markets. I expect a test of this decade support to happen between 4525 and 4490 pts for December 16 to 18: 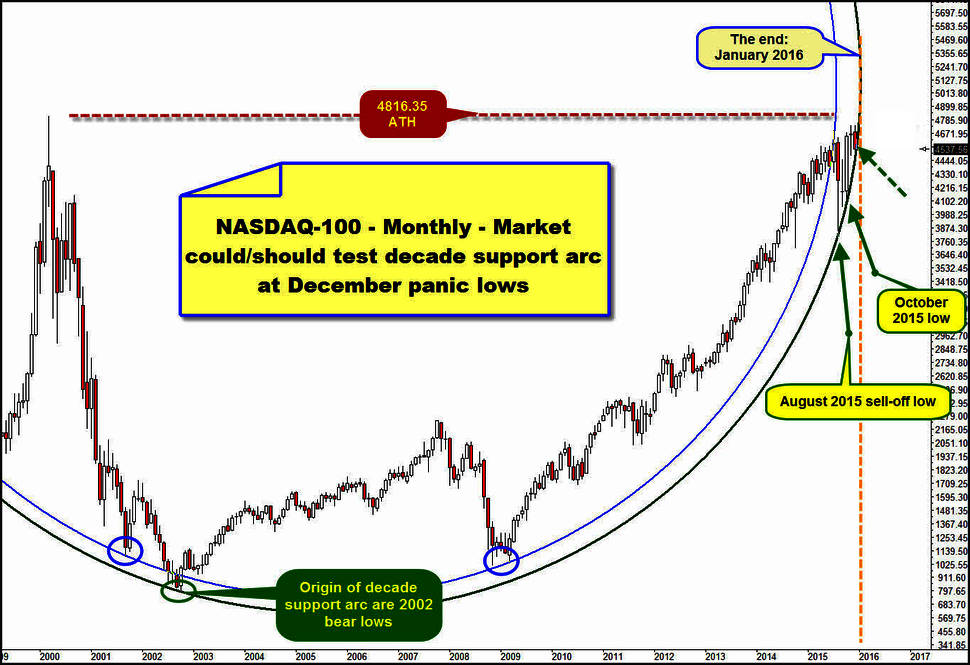 There were indications suggesting that the December low announced for December 16 to 18 might be reached in a panic-like move. That’s why the term "December panic lows" was providently used. Friday was truly a hefty sell-off day with panicky features. Sic. With the Friday low, 4534 pts were reached already. The decisive 4625-4990 decade support is now within striking distance. 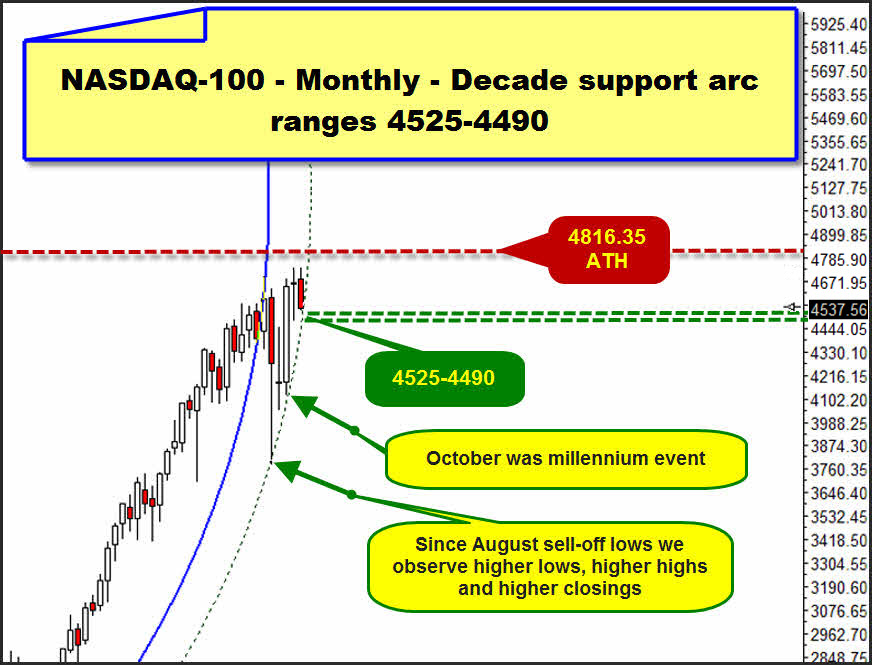 As last outlined in detail, the next test of the decade support arc is technically expected to proceed positively leading to a monster-rally according price to top out in January 2016, after a new all-time high (ATH). Thereafter, the tech leader – along with all the other Western stock markets, on any level they may be individually – is supposed to correct heftily, for about 3-5 months. 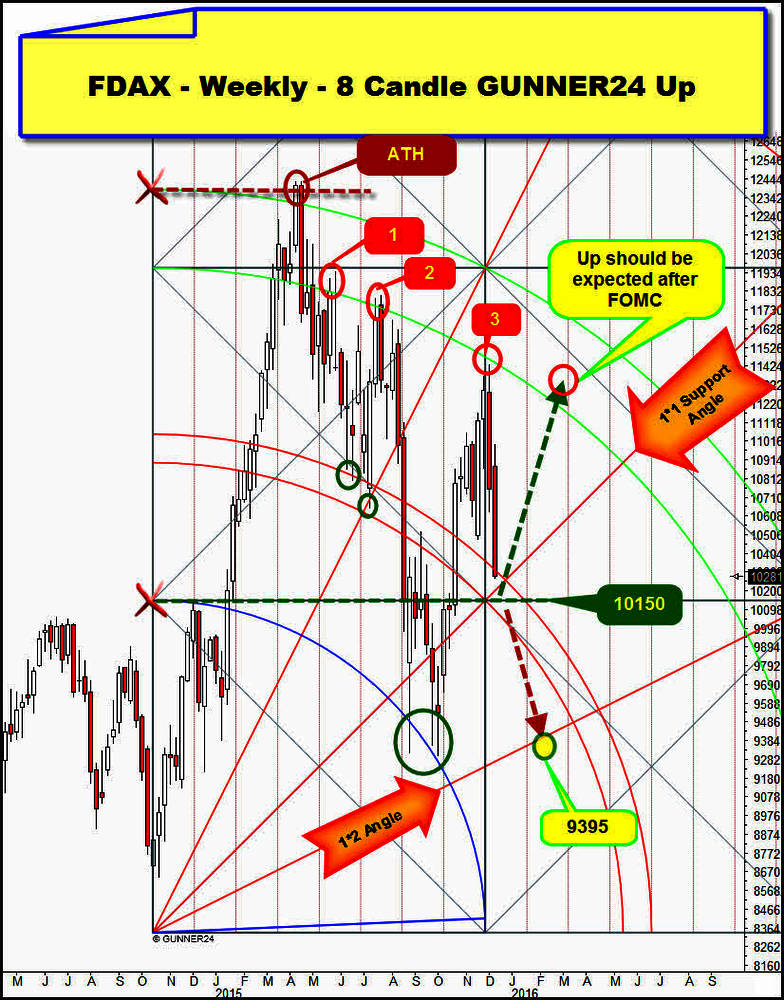 As a consequence of this violation, the 1*1 Support Angle will be tested in the course of next week. Technically, the 10150 first square line support should likewise have to be tested. As well as the NASDAQ-100, the FDAX will face a key support in the course of next week. Price meets time. Technically, the FDAX should bounce from the combined support magnet of the 1st double arc + 1*1 Support Angle + 10150 first square line upwards in the heftiest way in order to accomplish its 4th test of the lower line of the 2nd double arc resistance till January 2016. Near 11200 could be the January 2016 top!

IMPORTANT IS NOW: In case the NASDAQ-100 does NOT bounce from 4525-4490 and the FDAX does NOT bounce from 10150 in the course of next week, however both finishing next week TOGETHER/IN UNISON below the mentioned supports, it may certainly come to an X-mas rally once more, but this one would be weak according to the price. The NASDAQ-100 won’t succeed in laying down a new ATH, because technically a parabolic rise into January 2016 won’t be possible with a relatively clear weekly close below the decade support arc.

Key commodity No 1 is US crude oil at the moment. It was on 11/1/2015 that I last dealt with this market. Then, crude oil was expected to fall through the first quartile of 2016 being forced to work off the 33.75 withal: 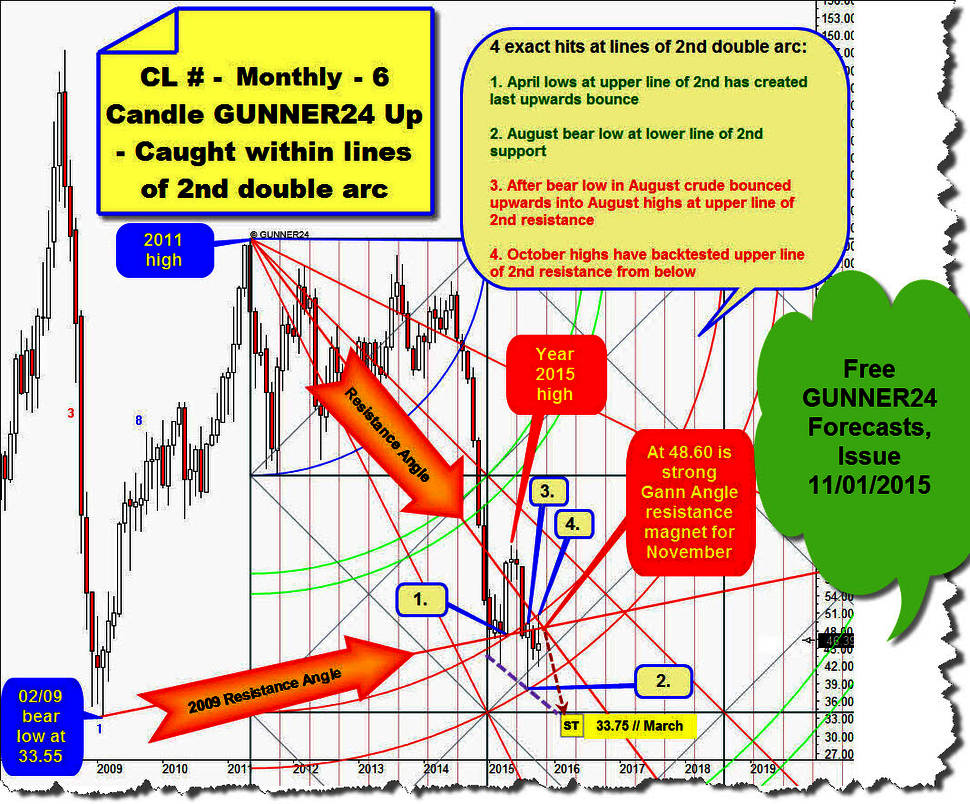 In the course of the week crude oil lost nearly 12%, serving as an excuse for the sell-off in the stock markets. On Friday before last, crude oil had to cede the important "round" 40$ on daily + weekly closing base, thereby being sealed the 33.75 to have come swiftly now. Last week showed panic-like features. The current panic wave complies the day # 6 tomorrow. As we can recognize optically, the important 33.75 downtarget that was evaluated at the beginning of the year for 2015/beginning of 2016, is really only just 1 or 2 weak days away: 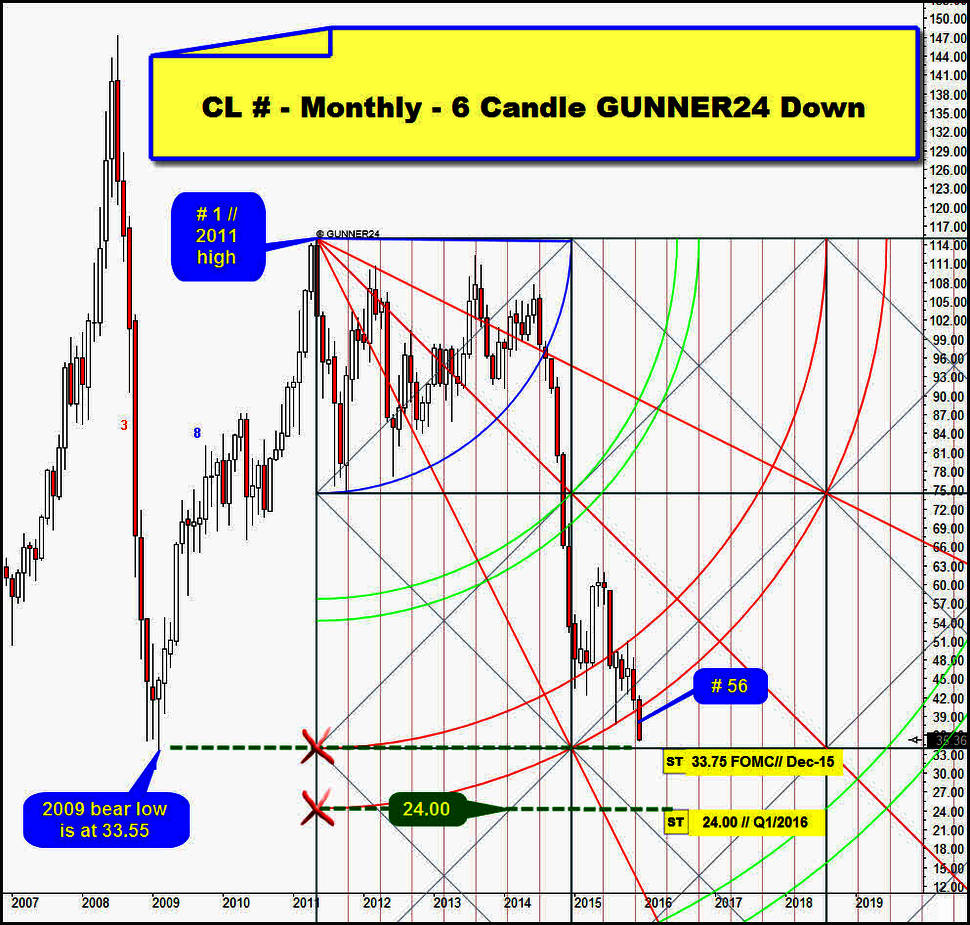 Panic waves in the daily time frame use to last 7, at most 10 days. Then, again 12/16 – 18, resp. the next hell’s week will come up, as an important turn date. The monthly Fib count fits likewise in the overall picture. Price mets time: The monthly setup starts at the high of the year 2011. Since then, altogether 56 months have passed by. Thereby, December 2015 is very close to the Fib turn number 55! An important bear low is likely due for December – perhaps the final price low of this bear!!!

Crude oil is signaling now that the whole commodity complex, beginning at the final December 2015 low (that should ideally be brought in above the 2009 bear low of 33.55, of course) may bounce for 3-5 months, perhaps even turning finally into a new strong uptrend in the monthly time frame!

The December 2015 close is the most decisive for the next signaling however. If crude doesn’t succeed in bouncing strongly from the 33.75 environment the last 3 trading weeks – resp. if it doesn’t succeed in finishing the year 2015 above 38$, it will almost be for sure that the bear market will continue, and then it may/should work off the 24$, yet at least the 27$, namely in 2016!

For more than 1 year, the possible final bear low for the silver bear market is stated. It’s supposed to be brought in between 13.50 and 13.10 (evidently that also means the "round" 13$ Gann Magnet to be worked off): 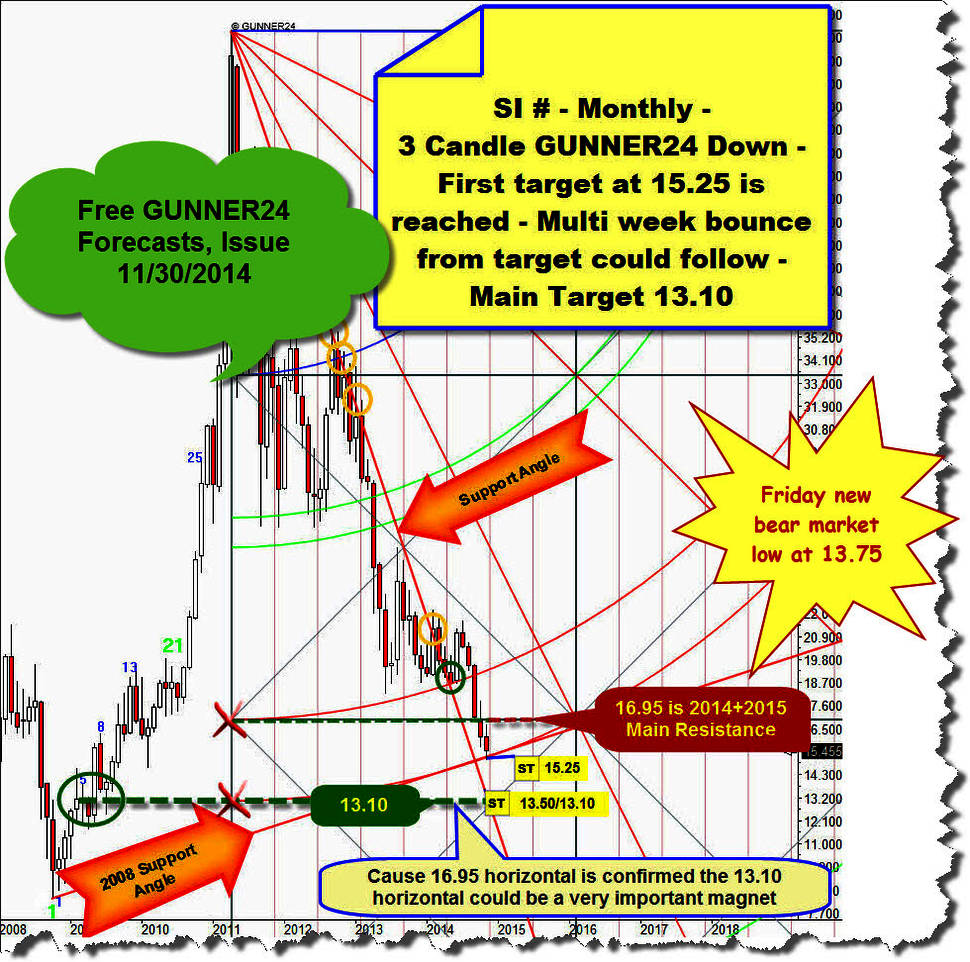 On Friday, 13.75 were reached, the most recent bear market low. In terms of the price factor that’s a thin red line, just 3 or 4 days away from the GUNNER24 Target Zone. Silver truly strived immensely against reaching its target zone for the potential bear market low. Now, silver may also get over the December sharpening in crude oil and the change that may be due there.

Valid is and has always been this: If oil is trending down, technically silver cannot rise substantially or start an uptrend!

Now, both markets are near to their respective GUNNER24 Downtargets in the monthly time frame. If both succdeed in working off these targets at the same time turnig off vigorously… Wow, what sort of prospect would have the commodities if the stock markets had to break all the dams yet in December resp. to top out in January 2016, at the latest!

What is valid for crude oil, by and large it is for silver as well. If silver doesn’t succeed in bouncing upwards strongly the last 3 trading weeks after working off at least the 13.50, resp. if silver closes the year 2015 below the 14$, we’ll have to reckon vigorously with silver to keep on accelerating in the bear market to reach the "round" 11$ there, in fact likely till April 2016…

Regarding gold, within the free GUNNER24 Forecasts „ Ticktack, ticktack, here comes the next important Gold-Low"on 11/29/2015 I committed myself: Gold shall have to make the 1040.40$ in December 2015. A strong support magnet for the rest of the year is taking its course there.

Perhaps, the important December 2015 bottom, the possible next important low of this bear market, is even at the 1023$ monthly support horizontal. If really everything is going well, indeed the 1000$ may still be worked off finally in December 2015! 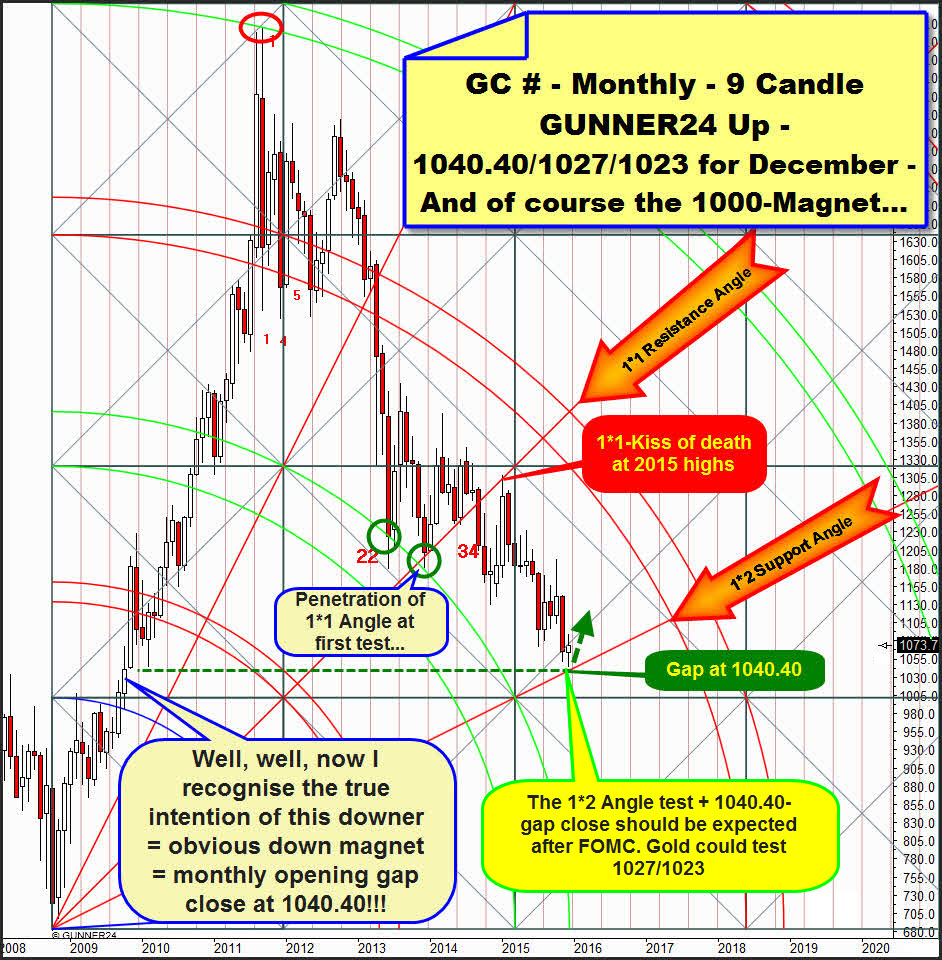 Don’t be taken in by the December 2015 low output so far. At the moment, it is at 1045.40$! Thereby, it’s scarcely at the combined target of the 2*1 Support Angle and the open gap on monthly opening base already, but this magnet is definitely NOT worked off. In the ideal case, gold together with crude oil, silver and platinum would finally turn at one of the notified December 2015 downtargets!! If this doesn’t happen in December, resp. if gold does not finish the year 2015 clearly above the 1073$ threshold, well, in that case the bear market will certainly continue into the year 2016!

With platinum either, for a long time I haven’t dealt. The last time I did was on 03/01/2015. Click here for the last analysis in detail and the bear-market targets to be expected that were pre-defined then at 792$ resp. even 706$: 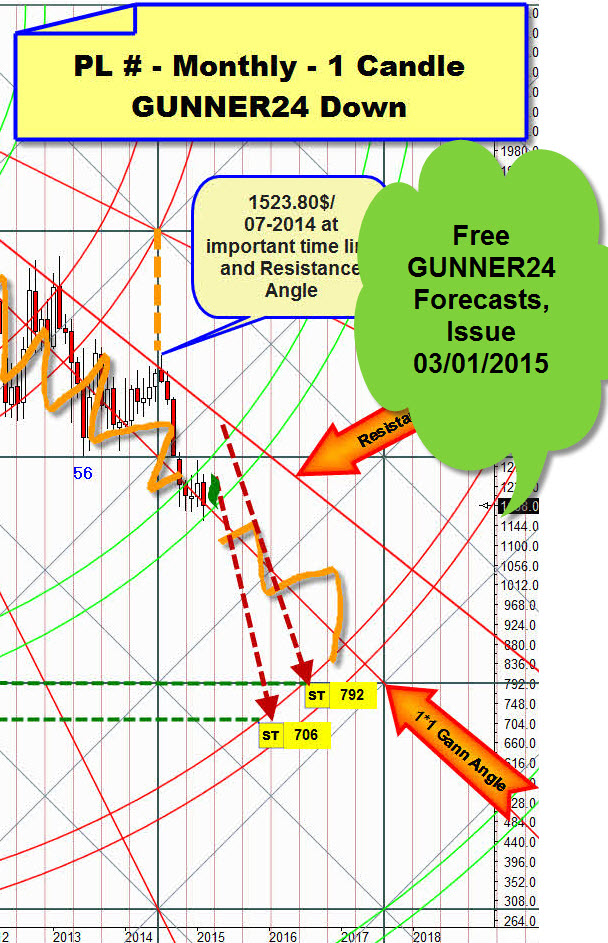 Its targets in the bear market as well as the likely course of the bear in 2015 are – and were then – as rock-hard cemented as the GUNNER24 Target Zone for silver. A weak downtrend year for 2015 was expected to come, with open at highs and close near lows. This is what is realy going to happen.

Here’s the update of the current ruling monthly 1 Candle down setup beginning at the ATH: 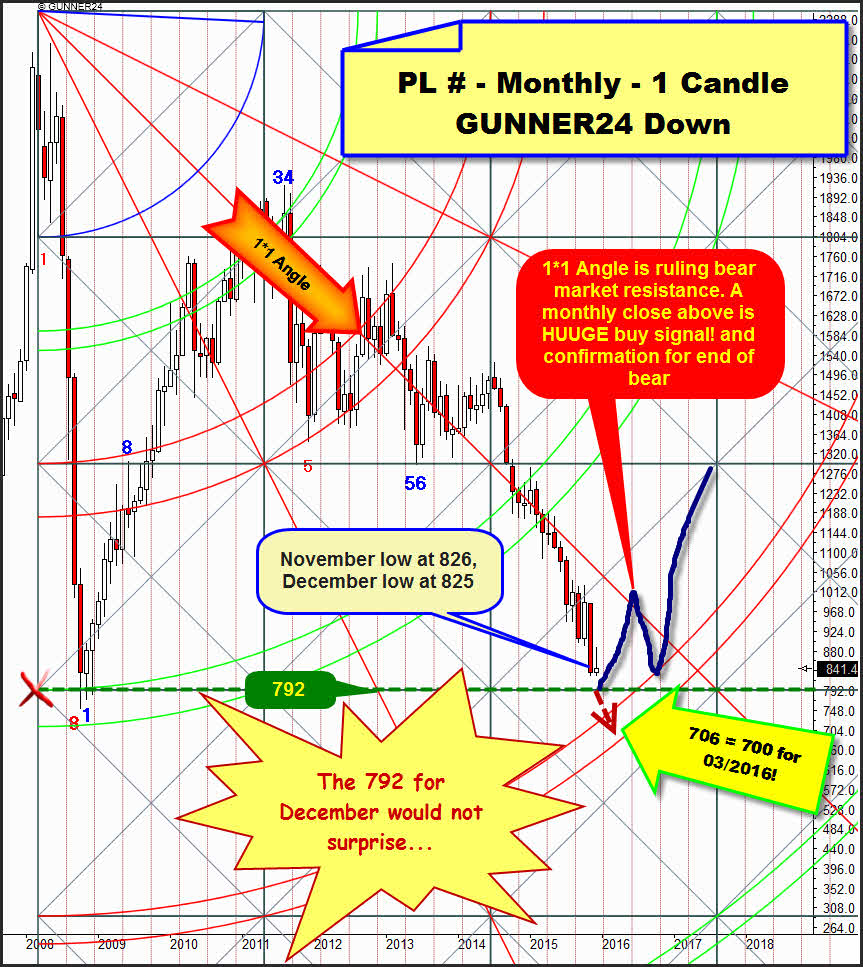 First downtarget for this platinum bear market keeps on being the backtest of the 2008 crash low at 792. Just like gold, silver and crude oil, also platinum is close to the first obvious bear market downtarget that is supposed now to be reached within a few days!

A lot points to platinum also to reach the 792 next week, at the latest till year-end:

The December low is even lower than the November low. From the current December low at 825, in terms of the factor price, the metal succeeded in bouncing upwards pretty strong. The gains of the first December trading days melted away like snow in the sun however.

Together with silver, it should swiftly go down into the 792 bear market target now. Optimal for an at least positive start into the year 2016 would be a December close above 860. Below that – I’m afraid – platinum would be supposed to keep on falling straightly into the main target of this bear. This is the 706$ = "round" 700$-magnet test that should have to be located then at the 2nd support double arc for March 2016. Red arrow scenario!

If platinum bounces upwards these days succeeding in finishing the year 2016 above 860, it might/should really have to test back the 1*1 Angle, to retrace then from this important bear market resistance angle into the 2nd support double arc, to produce then possibly a higher monthly low than in December 2015. Watch the blue course about this!

Join us now! With the Trade of the Day, I’m going to escort you through the troubled – and highly profitable - fairways of the coming days, weeks and months!