The rally advances of most broader US stock markets since the Trump election are impressive – to put it mildly... Dow Jones, Dow Transports, S&P 500, Russel 2000-Small Caps, as well as the Mid Caps have been booming to a considerable extent from 11/09. Since the mentioned out-performers 2-3 month consolidation phase/correction came to an end on 11/09, we're allowed to assume that the uptrend begun there and then is likewise going to persist during 2 to 3 month candles.

==> For the indexes referred to as above, thereby the final highs of the current rally move won't be due before December, at the earliest – 10% outcome. Yet the uptrend highs are much, much more likely to be expected by mid-January through the beginning of February 2017.

Initially, the NASDAQ-100 was somewhat confused about the election outcome, correspondingly dropping quite heftily just after the vote – as the only one of the important US stock market indexes. In a 3 day bull shake-out, it lost to a 3.67% at most. Since the 4677.41 shake-out low – a higher consolidation low in the daily time frame – the usual index leader has been rising again, but by far it doesn't partake so much in the billions of dollars that have been pumped into the US stock markets since the election.

==> The existing NASDAQ-100 underperformance is going to end soon. The index will dash off again. It will rush forward becoming the leader when the above mentioned US stock markets will have to begin the urgently needed recess within the next 4-7 trading days to work off their extremely overbought conditions.

The NASDAQ-100 succeeded in firing an important and sustainable buy signal: 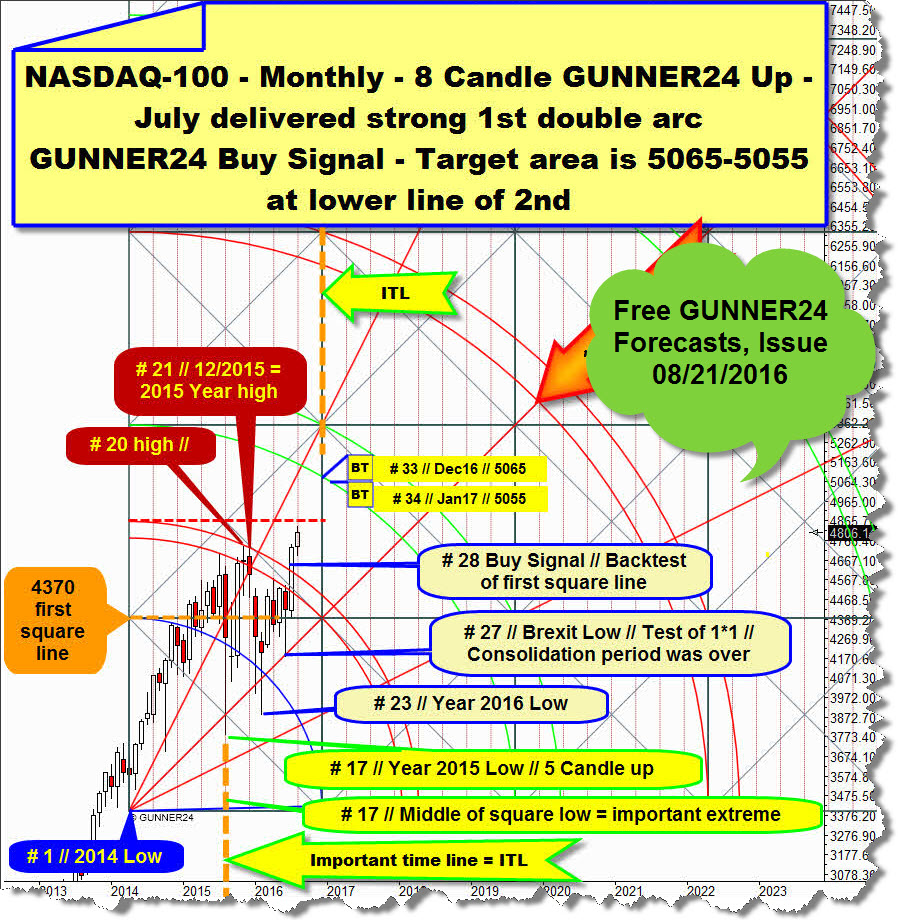 Within the free GUNNER24 Forecasts, issue 08/21/2016 "NASDAQ-100 in the next epical bull-run", among other things I presented to you the GUNNER24 Up Setup in the monthly chart above, subsequently – most intensively – going into the possible consequences, signals on hand and existing uptargets contingent upon this setup.

The last important point of change = important low for the index was the Brexit low. Reached at the low of the 27th month of the upcycle. The # 27-Brexit low tested back accurately the very most important bull market support, the 1*1 Support Angle. This last test of the 1*1 Support Angle at the # 27-Brexit low was the trigger for the last strong uptrend move in the monthly time frame that afterwards succeeded in overcoming this important double arc resistance in the yearly time frame by the clear # 28-close above the 1st double arc double arc.

==> Since the 2016 uptrend succeeded in overcoming visibly and clearly the very most important resistance, the resistance of the 1st double arc on monthly closing base at the # 28-July 2016 close, the lower line of the 2nd double arc is now the next activated important uptarget for the NASDAQ-100 in the monthly time frame.

Even though December 2016 is just the 33rd month of the upcycle, it offers itself as the next important month of change because the next reachable ITL, hence the end of the first square, falls on December 2016!

So far, everything essential on the existing buy signal and the activated main target of this bull-run regarding the price and time factor. Let's jump however into the presence now having a look to what the index has got up since the 1st double arc was overcome finally and unambiguously: 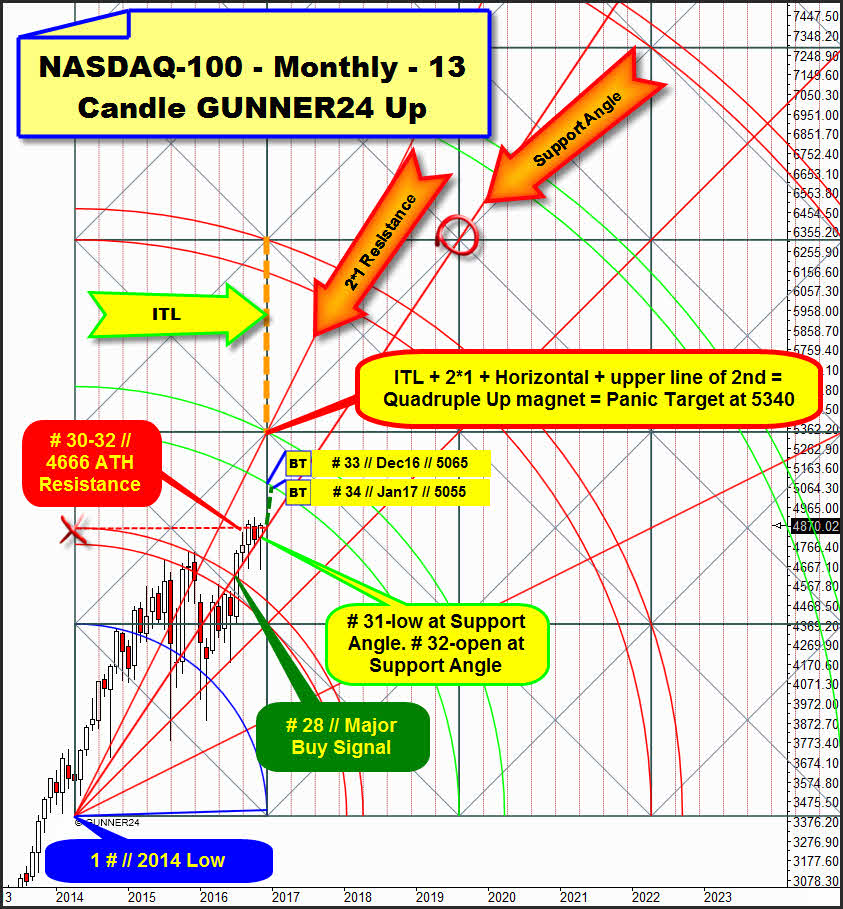 For as many as 3 month candles, it's been consolidating at the 4666 pts natural GUNNER24 Horizontal that results from the intersection point of the upper line of the 1st double arc with the starting point of the setup.

Inter alia, within the current consolidation period it has succeeded in bearing and defending the anchored Support Angle. This angle was taken upwards with the # 28-major buy signal and pinpoint tested back with both the low of the # 29 and the low of last month # 31-October.

4666 is all-time high (ATH) horizontal resistance that was slightly exceeded with the # 30-close however. Last week, the index closed at 4870.02! thus having overcome the 4666 ATH horizontal for the second time in 2016 on weekly closing base.

==> This is an extremely bullish development telegraphing that the 4666 ATH horizontal is going to be overcome very swiftly! Unless it was/is overcome finally with the close of last trading week already...

Not least because of the just newly triggered GUNNER24 Buy Signal in the weekly time frame, I expect the NASDAQ-100 to take over again the leading part again within the US stock market rally now since the other broader market indexes have to reduce their extremely overbought momentum in the daily time frame, yet the former has consolidated pretty long in a healthy way. 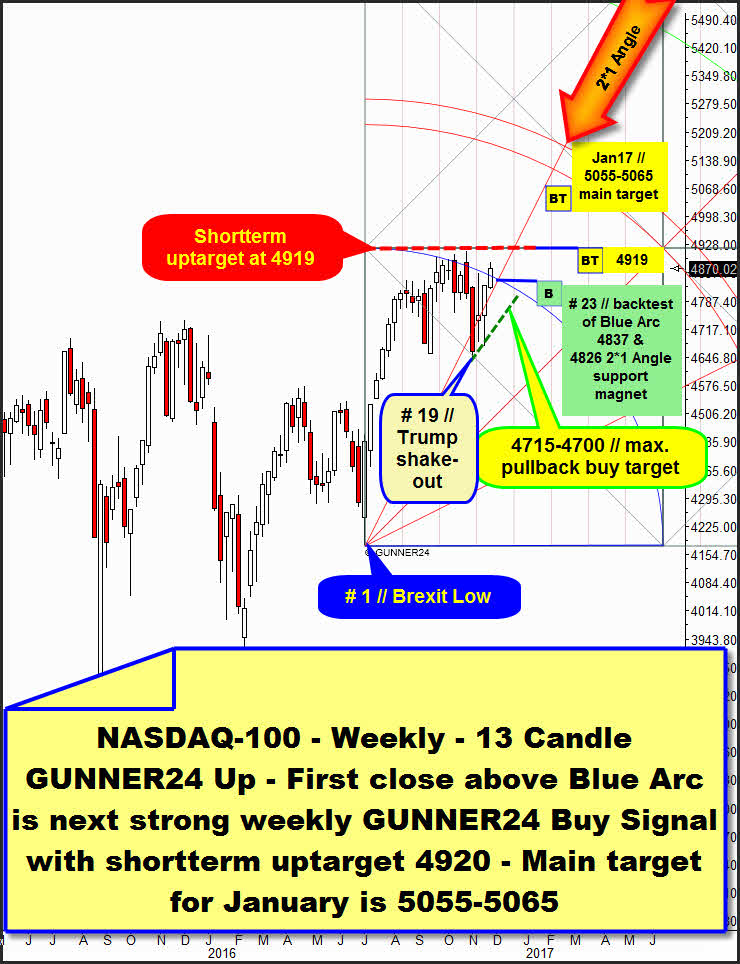 Above, you see the currently most determining GUNNER24 Market Setup in the weekly time frame. It's a 13 Candle up that begins at the attained Brexit low (# 1).

After the end of the 13 week initial up impulse, the market started topping out resp. swinging into a sideways phase. After the end of the initial impulse, it traded near the Blue Arc resistance without overcoming the latter in a sustained manner however. It even succeeded in achieving still two very small higher highs, = new higher ATHs in the weekly time frame. The importance of the Blue Arc as dominating resistance was confirmed with the # 15-high brought in exactly at the Blue Arc. Since both the # 16-open is pinpoint at the Blue Arc and the # 18-open is close to it, the Blue Arc is important arc resistance on opening as well as weekly closing base.

After the Trump bull shake-out that by the # 19-close actually exceeded the 2*1 Support Angle, the market succeeded in recovering itself, resuming its uptrend in the monthly time frame and – with the close of # 22-Thanksgiving week – overcoming the Blue Arc on closing base for the first time in course of 2016!

That's why there is a chance that the 4919 horizontal is going to put up very few or no resistance at all any more. Now the NASDAQ-100 is allowed to boom up to the 5055-5065 monthly main target. A next higher ATH within 10 trading days usually should trigger a MASSIVE rally thrust, burning the few remaining stock market bears!

For next week = # 23 of the uptrend the best cause safest entry into a long position for the 4919 shortterm uptarget will be between between 4837 and 4826. That's where the overcome Blue Arc together with the 2*1 Support Angle form a very strong weekly support magnet. In case the 4837-4826 is tested back until Wednesday without the 4919 previously being worked off, please go long there, imperatively!