Europe, I recognize a problem. A DAX Problem

Already early in 2017, after the sustained bullish developments of the Western stock market indexes (US & EU) during the first quarter and the generated long-term GUNNER24 Buy Signals in the monthly time frame we were able to identify that "The EU & US stock market indexes will deliver a flawless uptrend year 2017, having been made the year lows just at the beginning, hence in January 2017 and the year highs being supposed to be produced by the end of 2017. Most likely in the month of December!" - watch my 04/30/2017 "Nasty NASDAQ" analysis.

I can only continue to underscore and double-emphasize this statement as far as the leading US indices are concerned. However, with regard to the major EU stock markets, it could well be that their annual highs were finally cemented at the beginning of November, and accordingly the year-end rally could culminate in major lower highs or important double tops in the monthly time frame. Which in turn should fuel the probably already begun multi-month correction cycle in the primary bull market.

==> In concrete terms: it seems that the EU stock markets at November 2017 highs started a probably 3 to 6 months lasting correction.

Let me explain the overall situation of the Europeans on the basis of the DAX. Like always, for my DAX analysis I refer to the DAX Future contract = FDAX.

Because of the last analysis (Soon there are new FDAX highs - January 2018 target is 13500), we could be sure that the FDAX bull market has to reach 13500pts. 13500 price target for this bull run was almost inevitable, cause A) insanely strong buy signals have been fired at final Summer Lows which tested back 11900pts yearly support, signaling the end of an important correction cycle and next very powerful rally leg underway. B) At this time 13500 was nearest strongest GUNNER24 Upwards Magnet above: 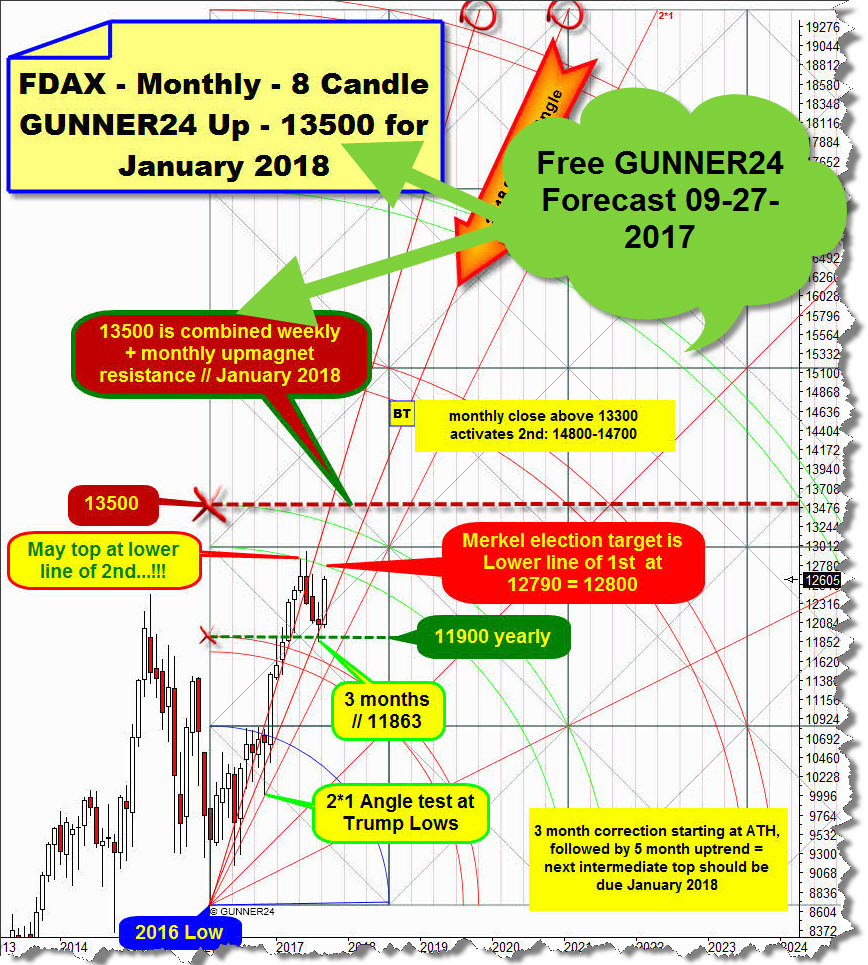 The 13500 price target was no brainer upmagnet so to speak, is formed by existing natural GUNNER24 Resistance Horizontal within monthly 8 Candle GUNNER24 Up, starting at 2016 Low and a main resistance double arc in the weekly time frame (not shown above...). On 11/03 the 13500 was tested for the first time. Two trading days later FDAX 13500 magnet was tested for the second time, afterwards market began to retrace from 13533 current alltime-high. 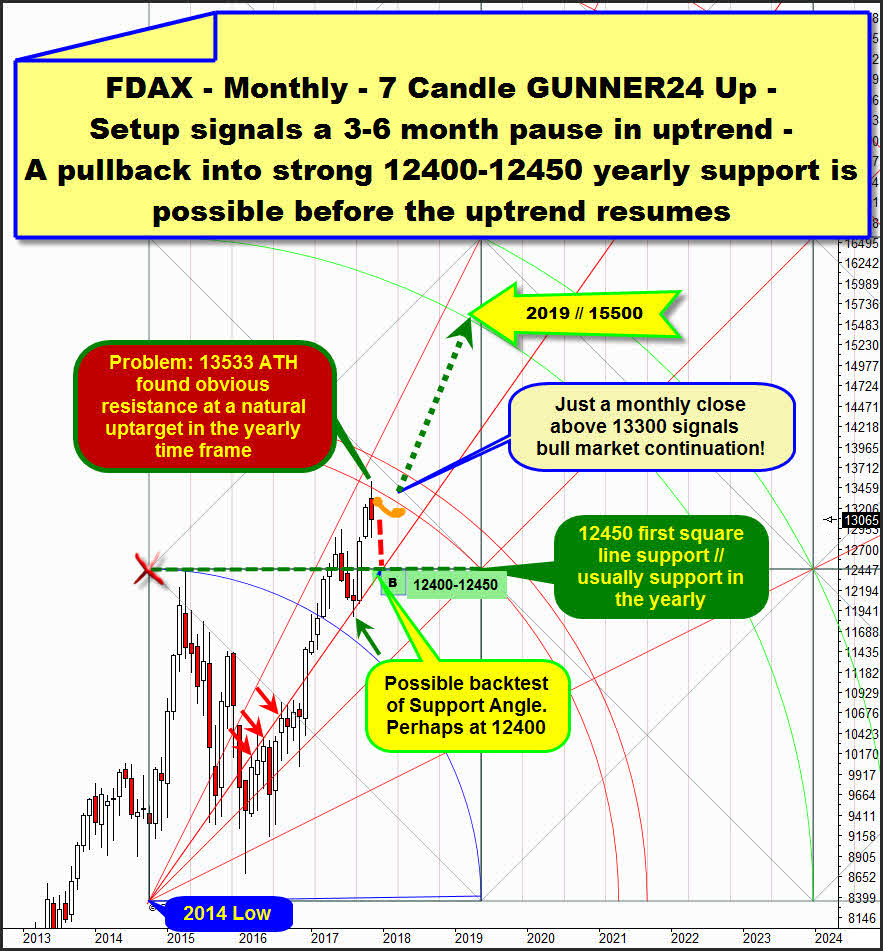 Above is another monthly view. Its the valid up setup that starts measuring at final low of the year 2014!

Setup measures upwards into final high of the year 2015, which at that time also was an alltime-high. So it measures the range from an important year`s low to an alltime-high which always also reflects important resistance in the most important time frames such as the decade or century time frames. And as we can undoubtedly see, the recent 13533pts alltime-high has worked off a natural bull market uptarget out of 2014 Low to 2015 High bull market cycle.

==> Alltime-high found resistance at lower line of 1st double arc natural uptarget within 7 Candle up above. The alltime-high has arrived at natural arc resistance, existing in the yearly time frame.

Such combined weekly, monthly and yearly GUNNER24 Resistance Magnets tend to force the markets into "stronger" countertrend moves. "Stronger" in terms of both the price and the time factor!

===> So it may now even be that the market needs a backtest of the combined 12450-12400 first square line and Support Angle magnet before the overall bull market wants to resume:

Both, the in course of 2017 finally upwards broken 12450 first square line horizontal as the at important 2017 low (green arrow) very successfully tested Support Angle are major supports for the years 2017, 2018 and beyond. The 2 are now supports in the yearly time frame! Both supports are very, very attractive backtesting targets for FDAX in course of 2018, thus it might be that both magnets will be tested back at the same time within a relative mild correction cycle, expected to last 3 month candles minimum up to 6 month candles maximum! ==> According time FDAX in the worst case should correct for 6 month candles = November 2017 to April 2018. Of course, all the other EU stock markets are in his luggage...

==> Gentleman`s long entry into year end 2017 & for the first months of 2018 is 12450-12400 combined yearly support magnet. FDAX is expected to test and work off 15500pts at latest in course of winter 2019. Then and there resides lower line of 2nd double arc which becomes official bull market uptarget after the very first monthly close above 13300pts! 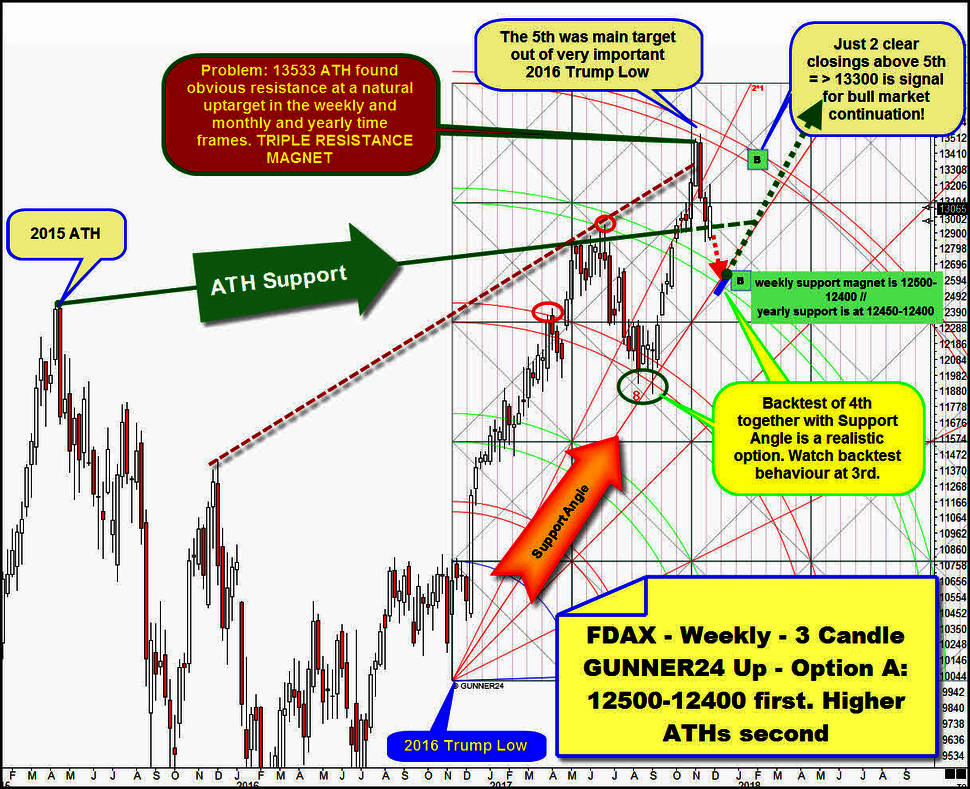 Above you can see the still totally determining up setup in the weekly time frame starting at 2016 Trump Low. His composition and the previous reactions of the market to the setup I have explained in detail in the September Forecast "Soon there are new FDAX highs - January 2018 target is 13500", that`s why we start the correction analysis at 13533 ATH (alltime-high) that has worked off 5th double arc uptarget. The 3rd and the 5th`s double arcs are always GUNNER24 Main Targets for stock markets, so ATH worked off natural main target out of very important 2016 Trump Low.

The 5th main target was expected to be worked off at "round" 13500pts at the beginning of January, this earlier processing of a main target therefore is an expression of the strength of this ongoing bull market on weekly, monthly and yearly base.

The very first reaction to the 5th main target resp. 13500 combined weekly and monthly and yearly resistance magnet = TRIPLE RESISTANCE MAGNET was a very negative one because the very first test of lower line of 5th natural uptarget from below has triggered a weekly reversal candle. Additionally the 2*1 Support Angle was finally broken to the downside after 5th main target test = GUNNER24 Sell Candle in the weekly time frame caused by TRIPLE RESISTANCE MAGNET.

This weekly sell candle confirms existance, importance and strength of 13500 resistance! and the start of a correction/pullback in the weekly time frame and perhaps also in the monthly time frame.

The current correction/pullback quickly reached the green slightly rising ATH Support. FDAX - so far - is able to defend that important ATH Support on weekly closing base, although the ATH Support is deeply violated on week low base. The circumstance that the past week candle has defended ATH Support on closing base although the week opened far, far below this yearly trail is a next signal that the bulls still have full control and that ATH environment should be attacked within the year-end rally which is expected to start soon.

But a weekly correction cycle triggered by a TRIPLE RESISTANCE MAGNET always allows a surprise to the downside! Means ATH Support could break in course of this or next trading week, and this bearish event usually will led to some bearish follow through and a backtest of 4th double arc and Support Angle magnet at 12500-12400 surroundings at final December low. Please remember that 12450-12400 is combined yearly support. 12500-12400 is very strong weekly support magnet and obvious backtest area for the month of December. Together there is combined weekly and yearly support existing at 12450-12400 for December and if reached, market should resume its uptrends there and than, afterwards printing some higher ATH`s until April 2018 or so.

But actually I tend more to this option as far as the correction is concerned: 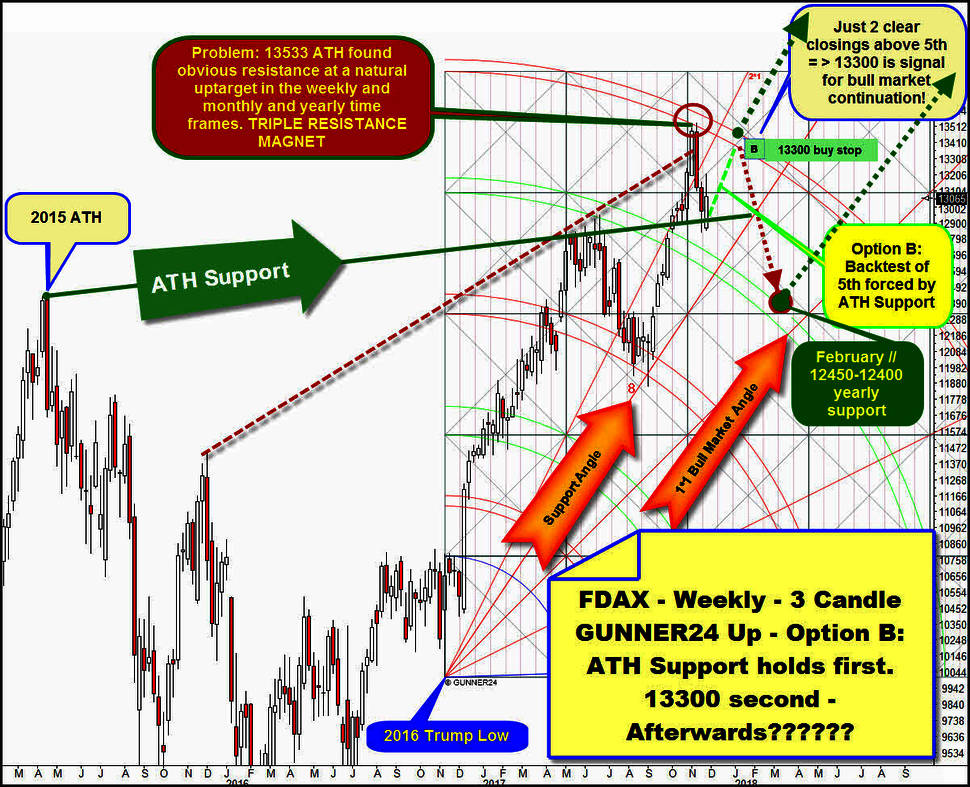 Option B is my favorite outcome, because the strong defense of the ATH support in the course of the past week seems pretty bullish. So I expect the rising ATH Support to hold in general for the next and the week after next week, and such positive backtest of an support in the yearly time frame normally triggers the serious backtest of the 5th double arc main resistance and the 13300-13350 during the year-end rally = bright-green dotted path above!

Hmm, after that the resistance threshold of the 5th double arc would have to be strong enough to force the market into another correction wave, which should test the 12400-12450 yearly support magnet perhaps in course of February 2018! = dark-red dotted down arrow scenario!

==> Two successive weekly closings far above the 5th main resistance and far above the 13300 is a next major GUNNER24 Buy Signal, for the 15500pts/winter 2019 uptarget.