DAX helps us identify the next stock-market top

Whereas the leading broader US equity indexes are near their respective all-time highs again, the DAX is still a 12% galore away from its all-time high (ATH) achieved this year in April.

It is, even though since the August sell-off lows the DAX has been performing almost as well as its brother in spirit, the NASDAQ-100, one of the clear outperformers and leader of the last months. The DAX could gain around a top of a 20% since the sell-off lows, yet the NASDAQ-100 even got a +25%. For comparison: The S&P 500 could "only" climb by +13.5%.

Also from the feeling, the DAX has been comporting as an outperformer and leader. It is showing appealingly strong and stable up-thrusts accompanied by minimum pullbacks in the backed uptrend.

So, since the € broke its neck a long time ago being conceivably supposed to keep on falling far underneath parity to the US$ (panic low at about 0.90… minimum… about that, please pay attention to my last EUR/USD analysis of 05/31/2015), technically the DAX should be seconded by that – much more than it was during the last couple of weeks?!

Beside the DAX, likewise all the other leading West European equity indexes are much farer away from their respective 2015 highs than the US American pendants. Of course, the capital flight from this economic zone that stinks of grave into the US$ and the US$ region has been obvious for long and it is going to continue. However, what kind of expectations should we actually have for most of the western European stock-market indexes? What are these markets really pricing in, let’s say for the next 6-9 months?

An attempt to answer: Like always, for my DAX analysis I refer to the DAX Future contract = FDAX: 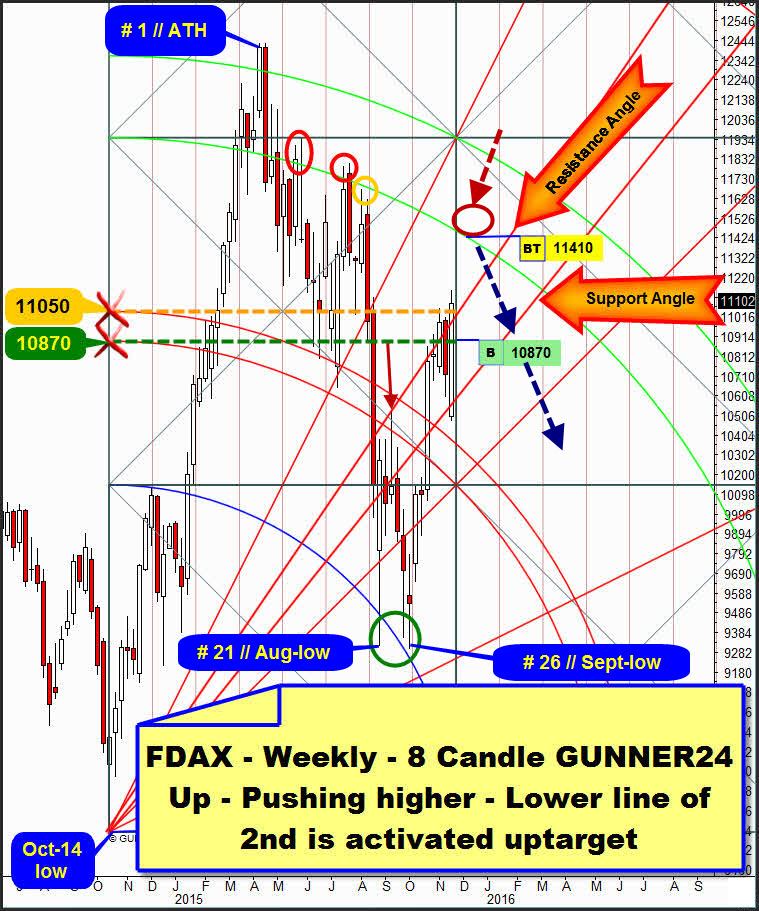 A brief outline on what has proceeded since the April 2015 ATH at 12400 for beginning today’s analysis.

Important for the current signaling are the 1st double arc and the 2nd double arc in the 8 candle up in the weekly time frame above.

==> The lower line of the 2nd double arc was an important resistance magnet for the market, and it goes on being in the near future!

After the 1st double arc support didn’t defy the third test any more (W.D. Gann’s rule of 3 and 4!), the downtrend accelerated, and the FDAX fell into the August sell-off low (Aug-low = 9318 pts. = 21 weeks since the ATH!) and into the Blue Arc support.

Then, the FDAX bounced into the Resistance Angle = red arrow and into the range of the 1st double arc – now strong weekly resistance area – and ultimately the FDAX fell into the small lower September correction low (Sept-low 9301 pts.) to complete therewith the correction move following the ATH after 26 weeks finally.

Since the September low, it has been going upwards. The resistance of the 1st double arc could be overcome finally and brutally at the beginning of October. Thus, again the lower line of the 2nd double arc was activated as upmagnet and uptarget for this swing in the weekly time frame!

==> Since the important 11050 horizontal – depicted orange dotted in the chart above – AS WELL AS THE RESISTANCE ANGLE was finally overcome by last week’s close, in addition the week closing near the highs and being attained the week high on Friday, ==> the trend continuation now is almost compellingly A) the next higher important upmagnet and the activated uptarget being worked off is only just a matter of a few weeks/candles.

Thereby B): With far more probability than an 80%, the lower line of the 2nd double arc will be reached within the next 4 weeks and thus being worked off!

==> There, in the environment of the lower line of the 2nd, another important high in the weekly time frame can be marked. Afterwards, the FDAX will be able/allowed to start declining. Watch the blue dotted arrows.

D): In the chart above, at 10870 you find an anchored buy entry for the next week. In case the FDAX relapses once more onto the now confirmed 10870-horizontal support at the beginning of next week, the traditionally strong Thanksgiving week, the safest, cause most riskless entry into longs for the move-up into 11410 will be there!

For evaluating the maximum target of this upswing, we consult the next currently valid up setup in the weekly time frame. It starts at the August low measuring the first 3 weeks of upswing. We see that the FDAX is more oriented by this shortterm setup than by the long-term guided upper 8 candle up in the current uptrend: 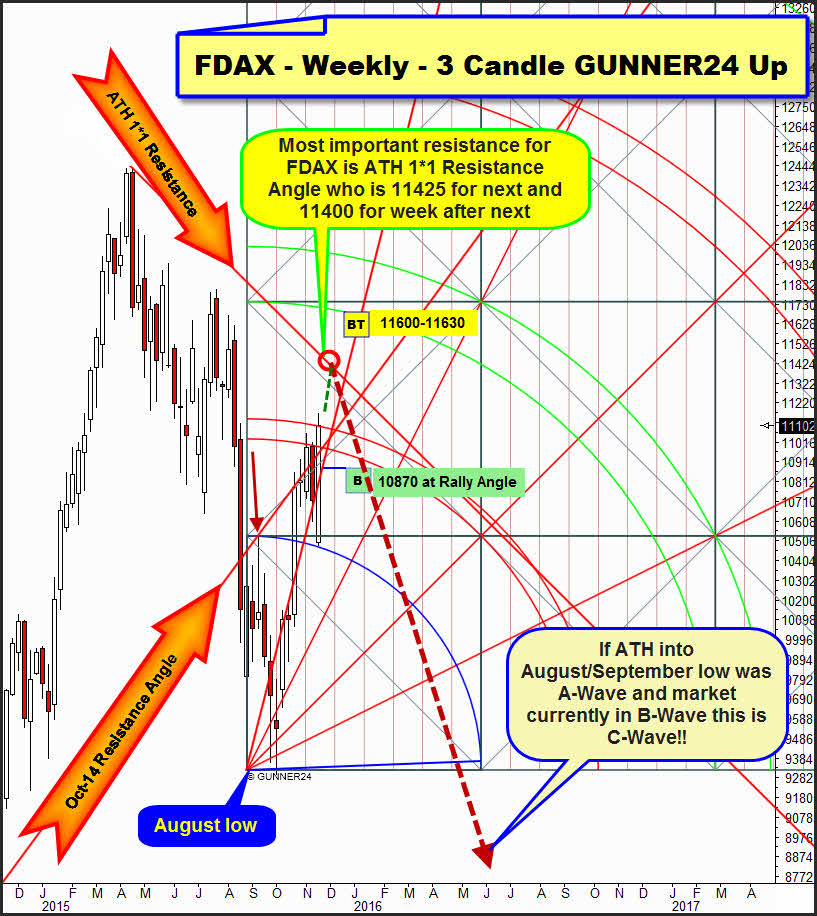 In my opinion, the August low is the more determining low of the last correction wave since it came about exactly 21 weeks after the ATH. Besides, the first upwave after the August low is certainly the upswing the FDAX is mainly going to orient itself by in future, because the high of this 3 week initial up impulse was pinpoint marked at the backtest of the Resistance Angle that anon can be derived from the important low of the October 2014 (Oct-14 low).

Ultimately, the current importance of this setup is finally confirmed if we treat ourselves to the last week candle whose low was marked exactly at the –obviously successful – backtest of the Blue Arc and whose close is exactly below the upper line of the 1st double arc resistance. The upper line of the 1st is resistance for the FDAX, but it is on weekly closing base only! Last week surpassed already above the 1st double arc resistance!

I think, the FDAX will keep on going up in the Thanksgiving week. The successful backtest of the Blue Arc happened not more than 5 days ago, and obviously, some vastly strong upwards forces kicked into the market there. The FDAX is supposed to close above the 1st double arc next week, in succession having to head for the 1*1 Resistance Angle that springs from the ATH (ATH 1*1 Resistance).

==> The 11600-11630 pts FDAX maximum target is in the weekly 8 candle up – first presented – centered between the lower line of the 2nd and the upper line of the 2nd, thus being defined as an extremely strong future resistance for the FDAX. And thereby, it is predestined to end toughly and brutally the current weekly uptrend releasing a strong and deep downtrend in the weekly time frame!

By the way… the currently determining angle that is backing the market, at present driving/chasing it upwards, likewise takes its course at 10870 for next week (watch the Rally Angle…)!!! Thus, for next week there is combined weekly support at 10870, and thereby the 10870 are the best, cause safest entry into longs for the 11410 minimum target.

Well, since now the uptargets of the current swing are defined, we’ll come to the important part of this issue - the answer to the question: What might be lying ahead of the investors that are invested in Europe resp. are up to be?

The pivot for the development of the coming months and far into 2016 will be the performance of the FDAX at the 1*1 Angle that originates from the ATH!! In the last chart above I call it ATH 1*1 Resistance.

And we know by the existing GUNNER24 Signals that the FDAX will/will have to head for this extremely important upmagnet soon. So, the ATH 1*1 Resistance Angle seems to exert now strong attraction for the price: 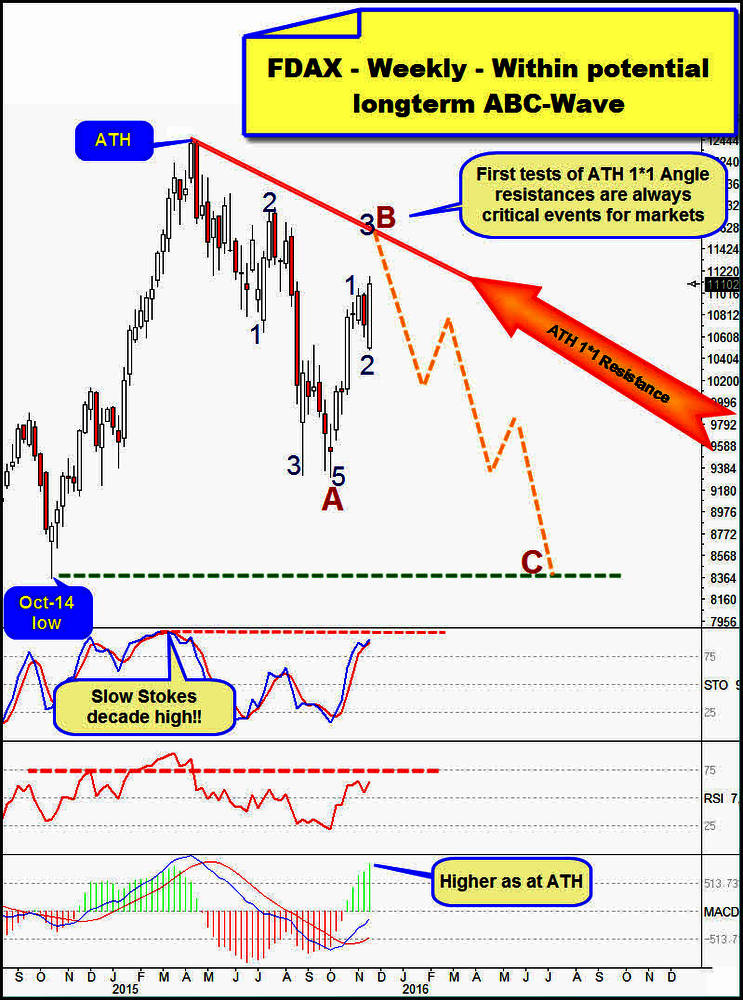 We remember: Below the 1*1 Angle the markets are in the bear mode, above it in the bull mode. In addition, as well a touch of the price with the 1*1 Angle always means a 50% test in Gann terms.

==> Consequently, the FDAX will be faced now with the VERY FIRST test of the 50% mark after the ATH.

We are agreed that it will be an extremely critical test influencing the further course of the market for the next weeks and months:

==> For, if the FDAX succeeds in overcoming the ATH 1*1 Resistance Angle on monthly closing base sustainably, for 2016 some new ATHs will be in store. Yet if it bounces from it in the first test that is to be expected soon resp. if the ATH 1*1 Resistance Angle delivers lasting resistance the coming weeks and months, the orange dotted scenario depicted in the chart would have to happen to the FDAX and the investors.

==> After thorough analysis, I see the DAX/FDAX at present being in a long-lasting ABC correction since the April 2015 ATH that ultimately should have to lead to a backtest of the important October 2014 low at 8400-8300 by the middle of 2016.

From the April 2015 ATH till the September low (red A), I recognize a classical first important A-downwave that displays 5 subwaves in the weekly time frame. Subway blue 3 finished at the August sell-off low, subwave blue 5 ended the red A at the September low.

At the moment, the FDAX is likely in its B-wave that mustn’t have more than 3 subwaves, after Elliott. The first subwave of B ended – as sketched – at the high of the blue 1. 5 days ago, at the Monday low, the blue 2 ended, thereby the FDAX may be now in a last, third and thus final subwave blue 3 of the red B.

As mentioned, the FDAX should technically reach the ATH 1*1 Resistance Angle working it off thereby. The top of the possible red B should have to be brought in, roughly, between 11400 and 11600. Then, thinks will become existential for the market!!

According to the rule book, technically the very first test of the ATH 1*1 Resistance Angle cannot be crowned with success. As to experience, not before the third or fourth attempt, an ATH 1*1 Angle succeeds in being overcome.

Unambiguously, the already extreme overbought condition of the Slow Stochastic oscillator that is already almost as high as it was in April 2015 (being a decade high then!) speaks for an important coming lower high at the ATH 1*1 Resistance Angle the coming couple of weeks. This means that an extremely negative divergence has formed since the FDAX is currently quoting 1300 pts below the ATH.

Furthermore, a negative divergence at the MACD histogram has formed that is already quoting above the ATH. Besides in question is whether the RSI is able to overcome its 75% resistance mark sustainably the way it coped with shortly before till after the ATH.

Seen from the timing aspect, a lot speaks for the final B-wave high between 11400 and 11600 to collapse with the FED’s first interest rate hike. So, in 4-5 weeks…

Being stock market investors don’t let lead us on. No matter, what you may read or listen by stock pushers in the near future. Rate changes nearly always mark important turns in the stock markets! Especially the Western European stock markets might react very prickly to another lasting reinforcement of the US$ = means lasting debasement of the €, massively and steadily falling for a long time into the year 2016 after a final B-wave top between 11400 and 11600 in December 2015.

==> … probably into a C-down-wave, once again comprising 5 subwaves that is supposed/forced/allowed to lead to the first test of the October 2014 lows if A=C!