Lounchpad into the NASDAQ-100 blow-off high

Rarely I’ve written such an important issue as today’s. The reasons why: Very infrequently, the US stock markets reveal glass-clearly their near-future intentions voluntarily.

The importance of this issue for your and my success is naturally restricted to the financial point of view. We "only just" have to implement our today’s realizations by trading accordingly. High and - above all - rather safe profits are in store for us now because the near purposes of the US stock markets are clearly identifiable at the moment.

The importance of this issue is owed to the fact that we are able to derive logically the few leftover timing options of the current stock market rally from the presently most important support of the stock markets with extremely high safety – insofar as such an 100% guarantee exists at all in the stock markets.

A brief beforehand conclusion: The most important logical options/consequences arising from the now clearly identifiable rally support of the NASDAQ-100 according to time are inter alia:

A) NASDAQ-100 is going to attain a new all-time high (ATH). It may be reached in November already, but at the latest in December, at the very latest in January 2016.

B) The most important American stock markets are most likely to top out either in December or – at the latest in January 2016 newly delivering some important bull market highs within these two months to start then a long + deep correction.

C) There is the downright high chance for the NASDAQ-100 as well as the NASDAQ Composite of finishing the bull market that has been running since 2009 with a blow-off top either in December or in January, for the time being.

E) Thereby, the most important US stock markets – AND OF COURSE ALSO many stocks – will deliver a pretty uptrend year because they’ll HAVE TO finish the year 2015 near resp. at the year highs!!

==> Thus, – if my conclusion is right – the pending first rate hike might/should be announced in late December resp. in January, thus actually giving the excuse for the equities topping out finally in December resp. January in order to use then the year 2016 largely for a pause in uptrend/correction/deep correction in the bull market.

At the end of 2014/beginning of 2015, I could identify two important existing arc supports for the NASDAQ-100. The origins of these supports trace back – among other things – to the 2002 bear low. Mind on this all the green and blue ovals in the monthly chart of the issue of 02/01/2015: 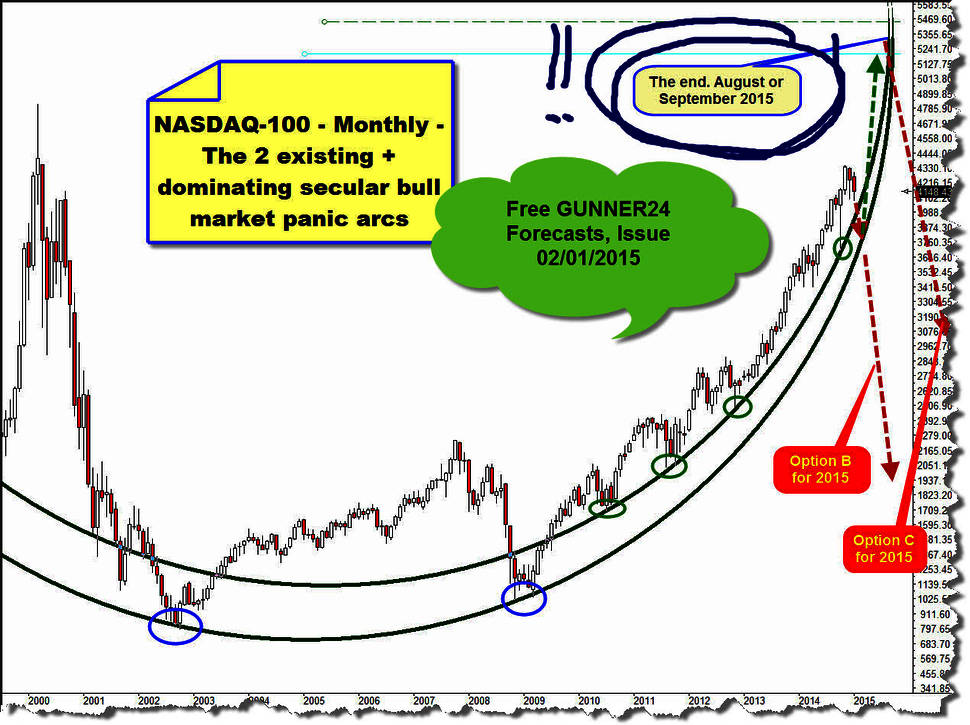 These arcs – then I called them "panic arcs" because they would have to lead either to an exhaustion into an important high or to a panic reaction after just this high.

Above, you recognize that inter alia the important high for the year 2015 was scheduled for August or September 2015. The end.

The combined support of the arcs would have had to come to an end then because both panic arcs approached there. After the temporal expiration of these important arc supports on yearly + monthly, but also on DECADE BASE, a hefty down reaction was to be expected (option C).

This is just what happened. After the July 2015 year high was reached at 4694.13 index points, it came to the almost legendary August sell-off (the panic month): 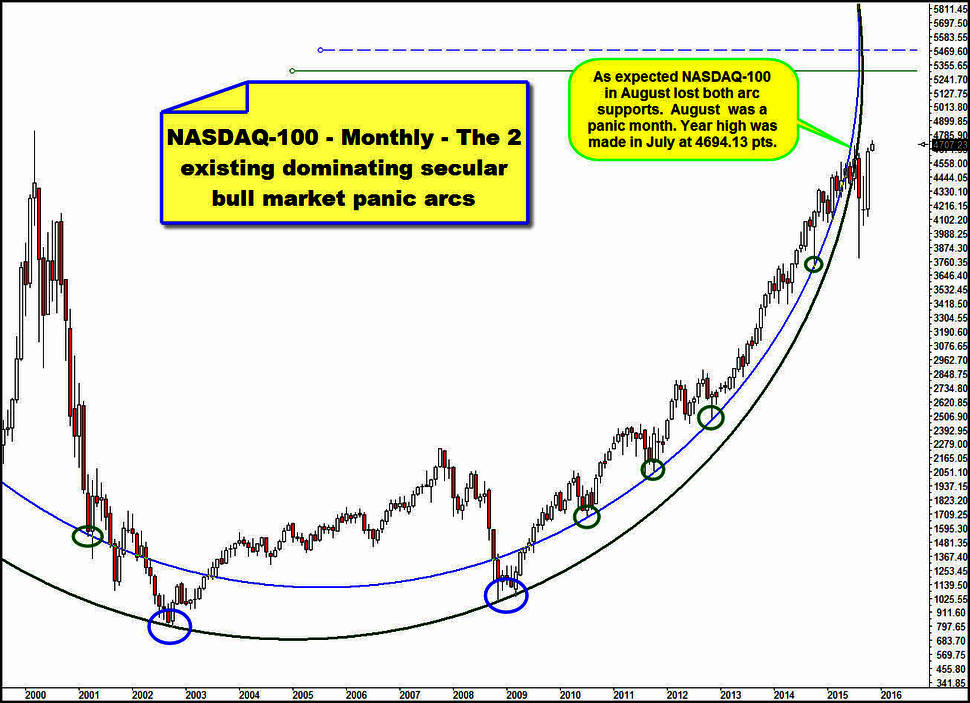 In hindsight, August simply had to sell off that heftily because a combined decade + yearly + monthly support got lost. Marvelously and textbook-like, we can recognize the way the index was able to defend the decade support for the last time with its July close, being forced to test back once more the green panic arc from below at the August high after the August opening had occurred below the green arc already.

This negative back test of this decade support at the August high led to the heftiest sell-off on monthly base since 2000, after the ATH had been reached then…

What however stopped the August sell-off and what led to the new bull market leg = current rally, and what will lead to the NASDAQ-100 compellingly head for a new ATH perhaps finishing the current bull market with a blow-off top in December resp. January?

==> The answer is given by this "newly spotted" support arc whose scheme is likewise green: 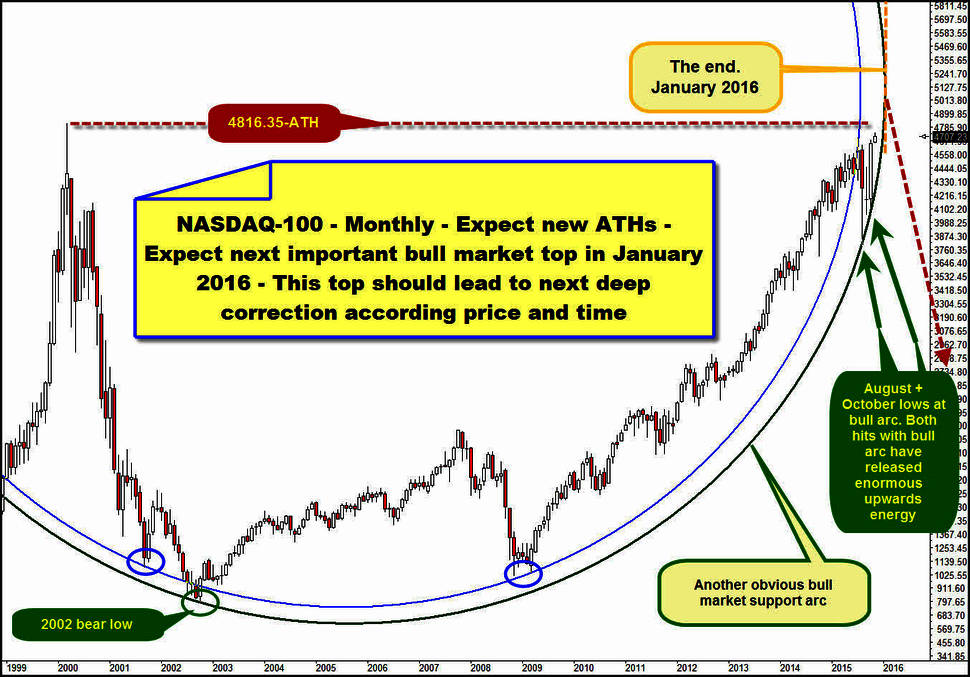 The green bull market support arc anchored now in the monthly chart above has almost the same shape as the first panic arc I evaluated = decade support. Just a little bit it’s traced to the right and bended.

Obviously giving support at the August 2015 sell-off low as well as at the October 2015 low.

==> The proven existence and the current energy level of this support are evidently forcing the market into a bullish exhaustion now, namely just since the August 2015 sell-off lows being reached:

After the third test of the green bull market support arc at the October 2015 low, October 2015 was able to create the strongest upwards month since 1999! October 2015 succeeded in achieving the highest monthly close ever. There’s no clearer proof for the force and power exerted by the new arc support.

==> that are going to lead to the compelling necessity of a new ATH! Both tests of the arc at the August + October low led to a severe buy panic that will really keep on resp. continue until thee influence of the green bull market support arc comes to an end/expires.

Obviously, the support resp. exhaustion function of the green bull market support arc will temporally expire (factor time) since it will have reached its maximum extension then.

The conclusion of that: Either for December or/and for January, the next important bull market high in the NASDAQ-100 will be due. The conclusion anon: the US stock markets are supported most positively till there. That’s why yearly closing prices at the year highs are most likely! ==> So, buy NOW tech stocks, tech indexes and tech related indexes and stocks at the current level. Ultimately, you can only win.

Furthermore, from the proven existence and current power of this mighty bull support that forces the price upwards with enormous up-pressure we conclude that another test (a 4th one) of this powerful bull- market support during the month of November AND/OR in the first December week would facilitate a super entry into long-positions, since the year 2015 would have to close almost compellingly at the year highs, after all.

==> Yet, since our green bull market support arc notifies that another important decade support will expire with January 2016, a down move, mannered however, would have to start then. I bet on a hefty down move/reset in the bull market for at least 6 months.

==> Each further touch with the bull arc in the course of the month of November 2015 AND/OR in the first December week should have to trigger another enormous upwards thrust!

The options are defined now on the way the market should have to deal with its bull market arc according to the energy state and timing. Now to the possible upwards targets (price) of this rally/this upleg. At that, the GUNNER24 Method and the currently determining GUNNER24 Up Setup in the monthly time frame help us!

Here, too, a brief look back. At the end of August, I could attest that in the NASDAQ-100 already with the August sell-off there was a good chance for the correction that had begun at the July 2015 year high of having finished as a result of a possible rare V-bottom reversal:

There were still some further options for lower prices, but this is irrelevant now since the market finally turned upwards from the August sell-off low. Let’s better concentrate to the current level of the 8 Candle GUNNER24 Up Setup relative to the index: 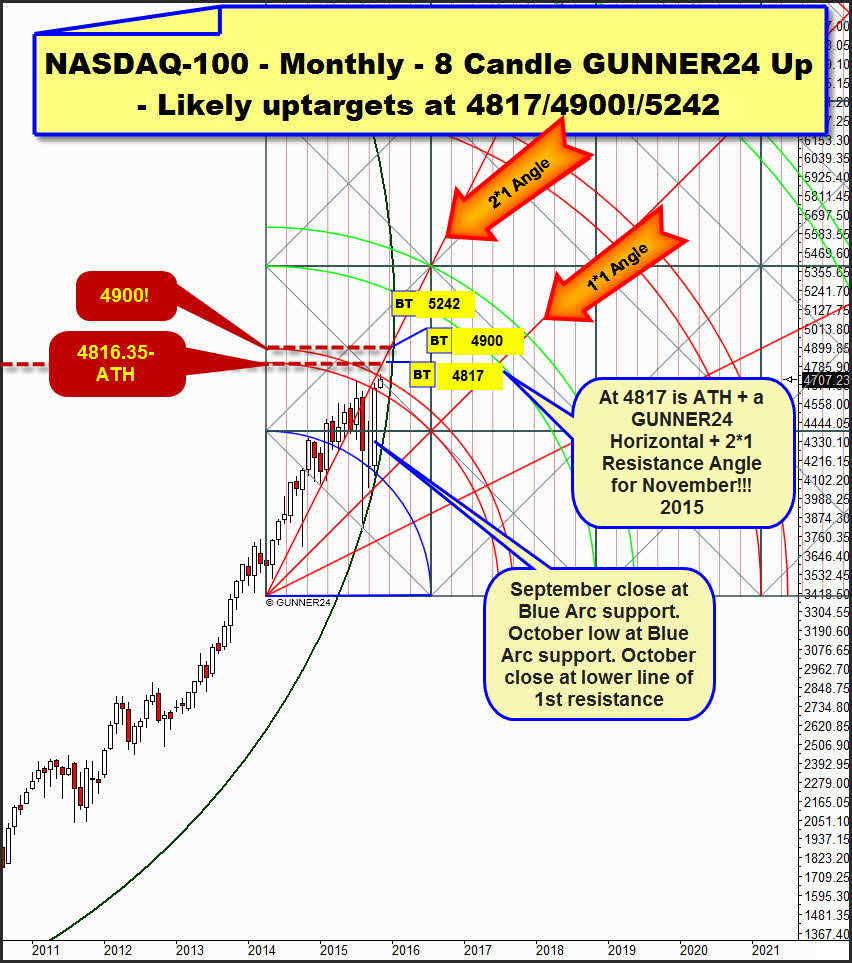 Green, you see again the newly identified arc decade support in relation to the price.

Neither the month of August nor the following months succeeded in marking a close below the 1*1 Angle = the market keeps on in the bull mode.

September also succeeded in holding the Blue Arc, in fact on closing base. the powerful October 2015 uptrend month is now very interesting in terms of signaling.

At the low, October 2015 did not only test the green decade support arc, but simultaneously the Blue Arc support was also tested back. At the October low, the market simply met a support that turned out to be so strong that the NASDAQ-100 ultimately had to rebound from it in a way that successively it produced its highest monthly close ever.

At the October 2015 high, the market already pierced a bit the resistance magnet of the lower line of the 1st double arc!… that after all is responsible for the fact that the former 2015 year high could be reached in July 2015, incl. the following downwards reaction.

October 2015 closed narrowly, most narrowly ABOVE the upper line of the 1st resistance thus giving a GUNNER24 Buy Signal in the monthly time frame.

The current November candle is now removing from the lower line of the 1st – thereby confirming the new October buy signal. It has reached now the upper line of the 1st resistance already and even penetrated it.

==> Ergo we conclude: Each new November high leads compellingly to the ATH at 4617 to be reached!!! since then the upper line of the 1st resistance will finally succeed in being overcome, thus becoming the next higher resistance magnet the point of attraction. And this is the old ATH at 4816.35 after all. Coincidentally, there is also an extremely strong GUNNER24 Resistance Magnet for November 2015 there, at 4817:

This one forms as follows: A) The 4817 GUNNER24 Horizontal derived from the intersection point of the lower line of the 1st with the beginning of the setup and B) the 2*1 Angle = strong Resistance Angle.

Since the index has been consolidating on a very high level for several days, we have to reckon with the current November high (at the upper line of the 1st resistance) to be overcome soon, thus being released another strong upwards thrust and being worked off the ATH very quickly as early as in November.

==> After reaching the ATH in the course of November/perhaps beginning of December truly it wouldn’t be uncommon to observe a relatively sharp reaction down to the green decade arc bull market support. That’s where the optimal buying zone for another exhaustion upleg into the final 2015 high resp. into the possible January 2016 blow-off high would be, at the next – the 4th – test.

If the index is able to overcome the 4816.35 ATH at the first try already – two daily closings above ATH would be enough – the index would have to be able to head for the 4900 quickly and swiftly. At 4900 there is another important resistance magnet. There, a GUNNER24 Horizontal Resistance, the 2*1 Angle and the green decade support arc will meet IN JANUARY 2016.

==> Thereby, the 4900 is offering itself as a possible exhaustion high and important bull market high for the turning month of January 2016!

A weekly close above 4900 till year-end 2015 resp. till the first trading week in the new year will activate a hefty high blow-off high for January 2016 as turning point. With that, an exhaustion up to the lower line of the 2nd double arc magnet resistance is offering itself = a possible 5242 blow-off high!