Already early in 2017, we were able to identify where this palladium bull would at least have to run according price and time before it becomes extremely critical for him and he might find it`s final, respective next important long-term high. With metal quoting at 838$ GUNNER24 Method expected a 1033$ uptarget, which usually should be worked off in December 2017 to January 2018 time period: 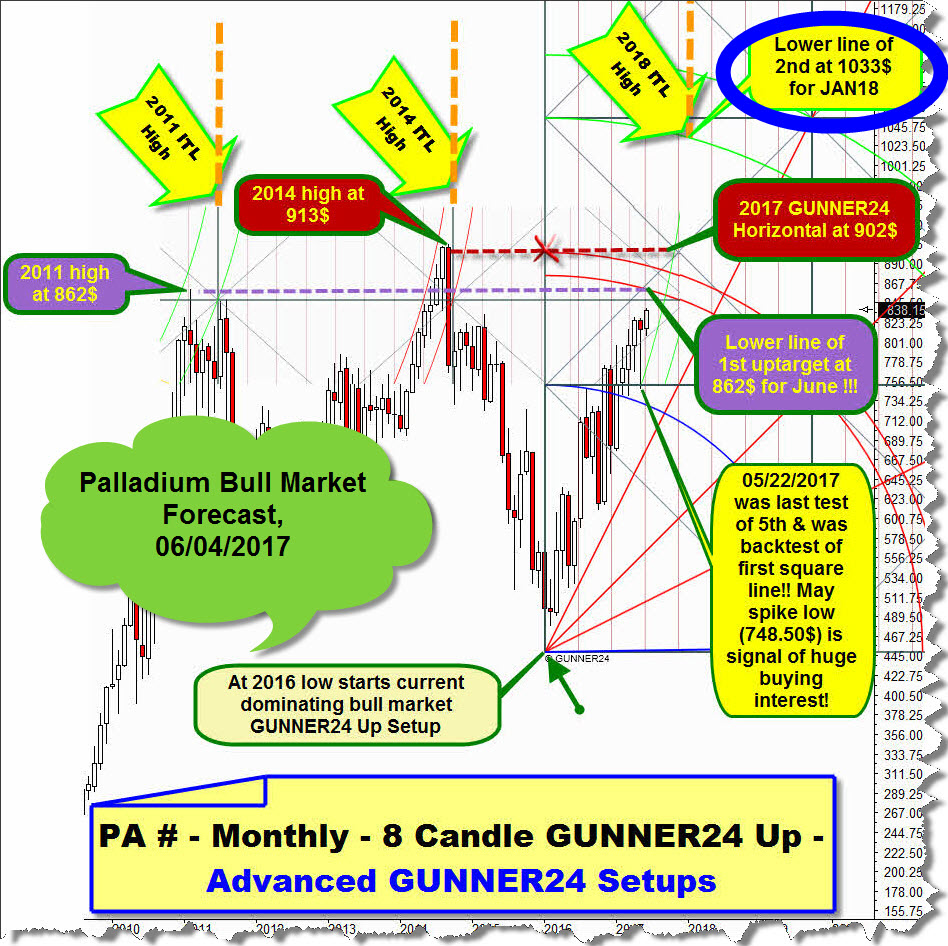 In the June analysis, I committed myself to the statement that technically palladium wouldn’t be able to top out before December 2017 resp. January 2018 thus being supposed to be able to find its next important bull market high in this period. Furthermore I tied down predicting also for the trading year 2017 – just as happened in 2016 already - that the metal would nail into the chart a crystal-clear uptrend year (year-lows near open!/year-highs near close!).

As a result, we added some longs at the next best opportunity. This came in September: 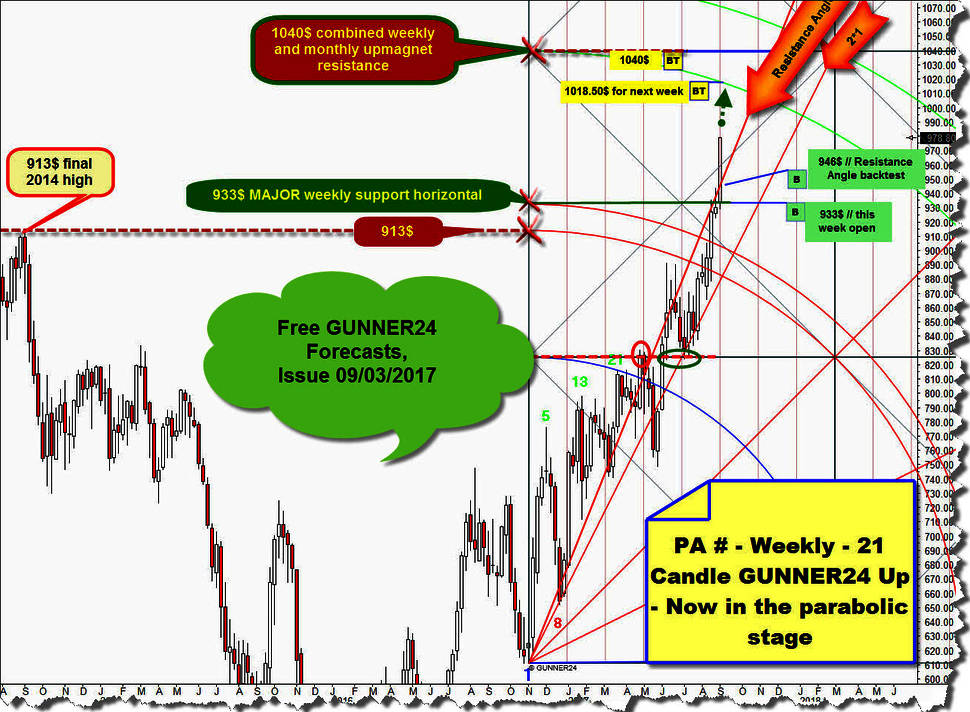 Out of nowhere the metal started to ramp from a 930$ consolidation base on the very first September trading day, firing a next major buy which signaled that a short squeeze and buying stampede to the "round" = natural 1000$ threshold is getting started. Of course, we could expect that the metal would have to decline harshly from the 1000$ important Gann number resistance after this MAJOR resistance would be reached/tested again after 16 long years.

In extreme the September top was allowed to reach 1018.50$-1040$ resistance range which is main resistance for the bull market that was triggered at 2016 bear market low.

Actually the palladium is once again at the magic 1000$ threshold. But now it will hardly offer any resistance. ==> the 1000$ will be overcome in the near future! Within days, even within the next few hours. We have a next easy and uncomplicated palladium long setup.

See now the current weekly state and the actually most determining GUNNER24 Up Setup in that time frame: 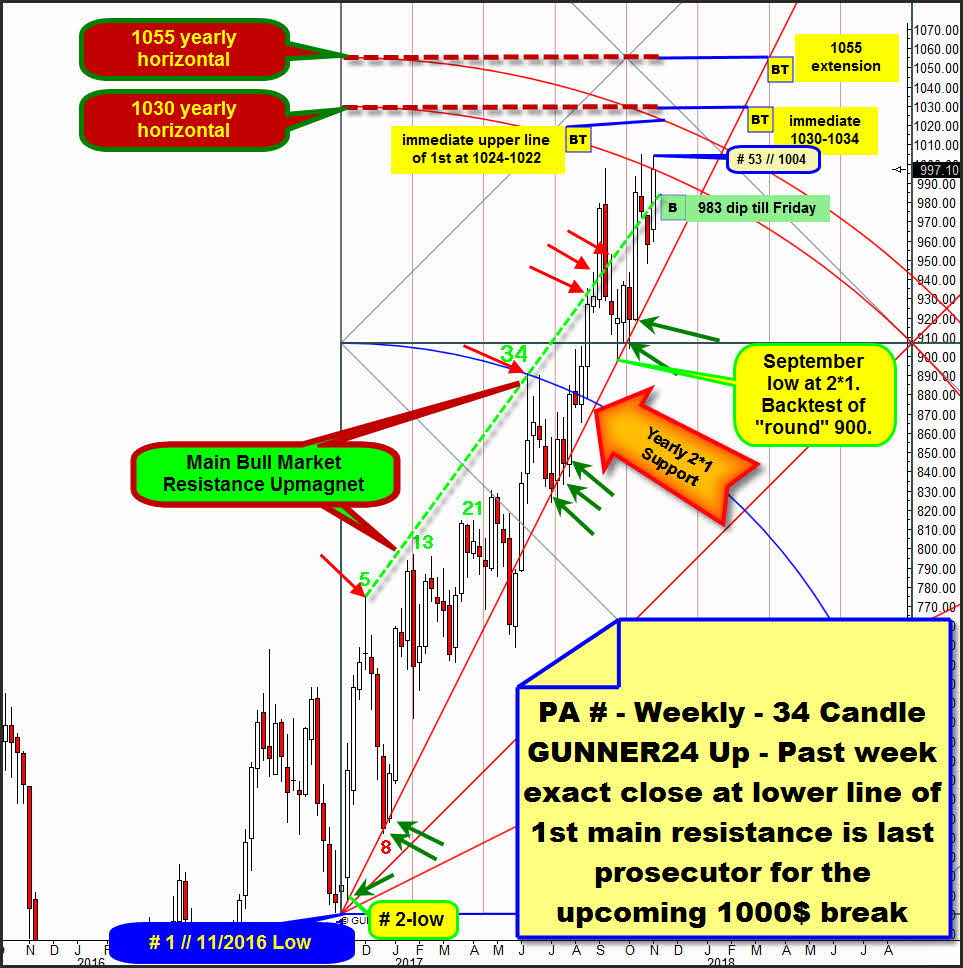 Watch that some important weekly intermediate bull market highs after the received final # 1 // November 2016 Low are oriented to a Fib number. I`ve just highlighted these very important bull market highs with the bright green numbers 5, 13, 21 and 34. At these highs, a change in trend within overall bull market began = weekly consolidation or weekly correction cycle.

Watch additionally that at the red 8 Fib number which was accurate positive backtest of 1*1 Bull Market Angle another change in trend occured. 8 Fib number low was first very serious backtest of 2*1 Angle which is main support of this bull run. By the way, also # 2-low tested 2*1 Angle from above.

==> Till today we can count nearly 10 successful tests of 2*1 Angle at higher weekly lows. 2*1 Angle is a mega bull market support and thus currently most important support in the weekly but also yearly time frame. 2*1 Angle at same time is - currently and for the next few week candles - week closing base and week low support for the palladium bull.

OK, that was the preparation. Let`s get to what should happen:

Setup above measures 34 Fib weeks bull market advance, thus measuring up to the highest Fib number processed so far. At the same time this means that it is the most important PA # setup because it depicts the largest - up to day - natural initial up impulse out of # 1-low. Consequently any projected and forecasted GUNENR24 Item out of the 34 week initial impulse has most important meaning for this bull.

==> And as you surely have not missed, metal closed the last week PRECISELY at mega bull market resistance and prior activated lower line of 1st double arc upmagnet.

Lower line of 1st resistance was/is major natural upmagnet for this bull. This has predicted weekly 34 Candle up above. Well, the past week candle was week No. 53 of the bull and this is of course now close to pending 55 Fib number. Because this market likes, or better "needs" to change its trend precisely at the Fib turn numbers we can be relatively sure that week after next should mark the next important bull market high and that at 55-top another downleg in the weekly scale will be triggered.

==> Week after next trading week # 54 is No. 55 of bull. Then!!! current running weekly upcycle should find its final top, afterwards starting next weekly down cycle or pullback.

Because the palladium likely will test and finally is able to work off 1033$ main resistance next/within days, there is HIGH RISK that whole bull market is willed to TOP FINALLY near or at 1033$ resistance magnet, perhaps starting a very long lasting multi-month bear market after first 1033$ test!

The course of forecasted lower line of 1st uptarget resistance always was close to the 1000$ Gann number threshold, so its proxy for 1000$, most imaginable strongest main resistance. Now that the last week candle close has reached this resistance exactly and the metal is expected to rise further for some more days - at least 6! trading days - the 1000$ threshold will be skipped! Certainly and quickly!

There are some uptargets for the # 55 exhaustion move, little bit hard to forecast where the final 55-top should be made.

In any case, ANY PA # long position should be closed after working off 1030$. This is usually mega strong horizontal resistance out of lower line of 1st double arc and is in full harmony with 1033$ magnet which is combined monthly and yearly uptarget for the palladium bull market. Hence starting at 1030$ up to 1034$ or so is combined weekly, monthly and yearly upmagnet resistance.

Once at 1004.10$ or higher in course of next week the breakout attempt should usually reach/test/work off upper line of 1st next higher combined weekly and yearly uptarget magnet. Upper line of 1st resistance is at 1024$ for # 54 and 1022$ for # 55-expected top.

Another higher yearly resistance is at 1055$, it can`t be ruled out that the pending 1000$ breakout is able to test that threshold... breaking such high important 1000$ Gann number resistances to the upside can always trigger enormously strong upwards forces/powerful short squeezes.