The tech indexes as well as the broad S&P 500 keep on being in the absolutely confirmed bull market in the monthly und weekly charts.

The accomplished lows after the Brexit referendum have a special meaning for the broader US stock markets, given that they finalized significantly higher lows in the uptrend year 2016.

The S&P 500 rose impulse-like from the Brexit referendum low to the current alltime-high (ATH) and year high = 2193.81 pts. This first initial impulse lasted for 8 week candles = classical impulse that oriented itself cleanly by the important high 8 Fib number.

Since this Blue Arc has put out an important trigger mark = magnet that’s pretty easy to be identified and since the most dominating and strongest market support at present is likewise easy to be identified, we can use those two – currently most important – magnets for signaling in the short and medium terms. Such as last happened within the free GUNNER24 Forecasts, Issue 10/09/2016: 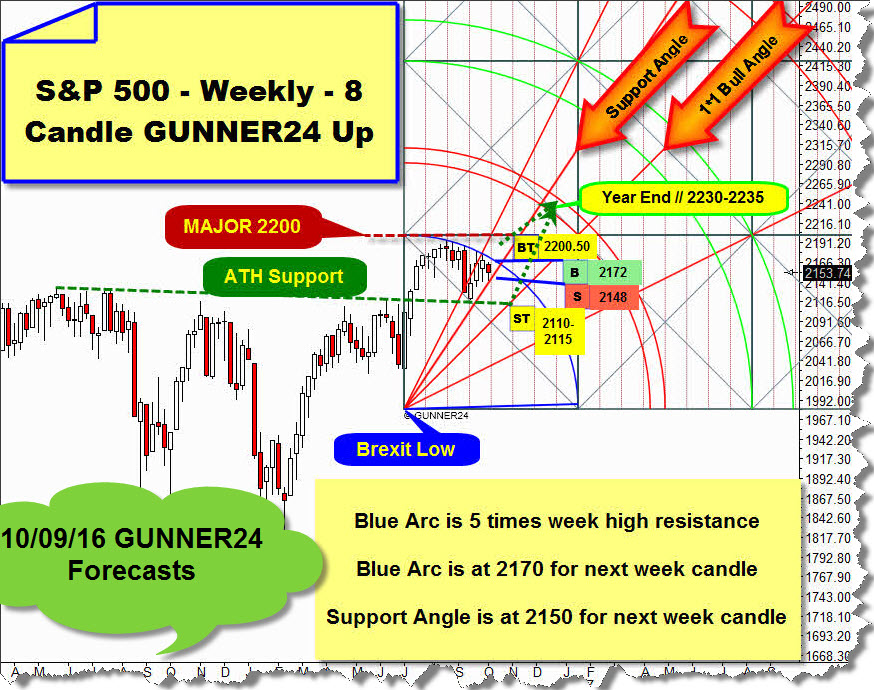 We assessed then, on the one hand that A) only a clear weekly close above the Blue Arc (2172) would have had to lead the S&P 500 up to the 2200.50 first square line resistance through the US Election. It didn’t happen like that…

On the other hand B) a weekly close below 2148 pts = a weak sell signal until the election date (11/08) would newly have had to force the index to the confirmed important and strong ATH Support to be tested and to the 2115-2110 GUNNER24 Sell Target to be tested. This is what did happen. The current pullback/consolidation low is at 2114.72 pts.

C) Furthermore, there was the assumption that the 1*1 Bull Angle should have had to be tested till the election date. This important test is due yet!

Update of the S&P 500 and the dominating 8 Candle up, plus some new and valid buy and sell triggers through the election week:

==> The Blue Arc is furthermore the most dominant resistance magnet. So, it’s got to be for 99% sure that any coming weekly close above the Blue Arc within the next 3 week candles will release a monstrously strong rally move up to the 2200.50 first square line.

Buy signals in the daily time frame in case the Blue Arc succeeds to be overcome till then:

Let’s go now to the consequences that would result from a final break of the ATH Support resp. of the 1*1 Bull Angle:

The index is squashed now more and more between the Blue Arc main resistance and the ATH Support, thereby maneuvering itself increasingly into the final decision mode. The ATH Support was the obvious price target for the currently running consolidation/pullback having been tested successfully twice so far.

The 1*1 Bull Angle was ditto always a normal consolidation/pullback target. So, several weeks ago, there was the prospect that only a test of this extremely important support magnet might end this consolidation/this pullback. By and large, I consider the 1*1 Bull Angle as a necessary time-target, whose being worked off in the pullback might certainly be required. In fact, it might till shortly before the US presidential vote.

Thereby, the indeed compellingly required test of the 1*1 Bull Angle is obviously to be expected in the course of next week…

Well, technically, as early as next Monday = last trading day in October, this important support will be worked off being tested for the first time in the current pullback. Interestingly, the index might open pinpoint at the 1*1 Bull Angle or shortly above - perhaps even pretty deeply below which is certainly most probable taking into our consideration the short-term consequences of the e-mail affair around Clinton!

To that one, the market participants couldn’t really wise up well before stock closing on Friday. So, the market might be willing to open next week BELOW the 1’1 Bull Angle.

As you certainly suppose or know, I’m a tremendous fan of timing, because frequently it’s more important for me to understand when things happen or might happen than where they happen (supports/resistances). So, a week opening BELOW the 1*1 Bull Angle on the last day of the month might trigger a powerfully strong sell signal that would have to lead to the 2016 1*1 Bull Angle at 2092 to be worked off till November 7 resp. 8!!

Since also the very first trading day of a new month may always gladly be a trigger for an important move, the market has positioned itself pretty precariously now according to the time factor. The 1*1 Bull Angle might not bear but fall. The market might abstain from lingering/remaining between Blue Arc resistance and ATH Support and above the 1*1 Bull Angle till the election in order to get started then. For this, watch the shadow-purple week candle scenario below! 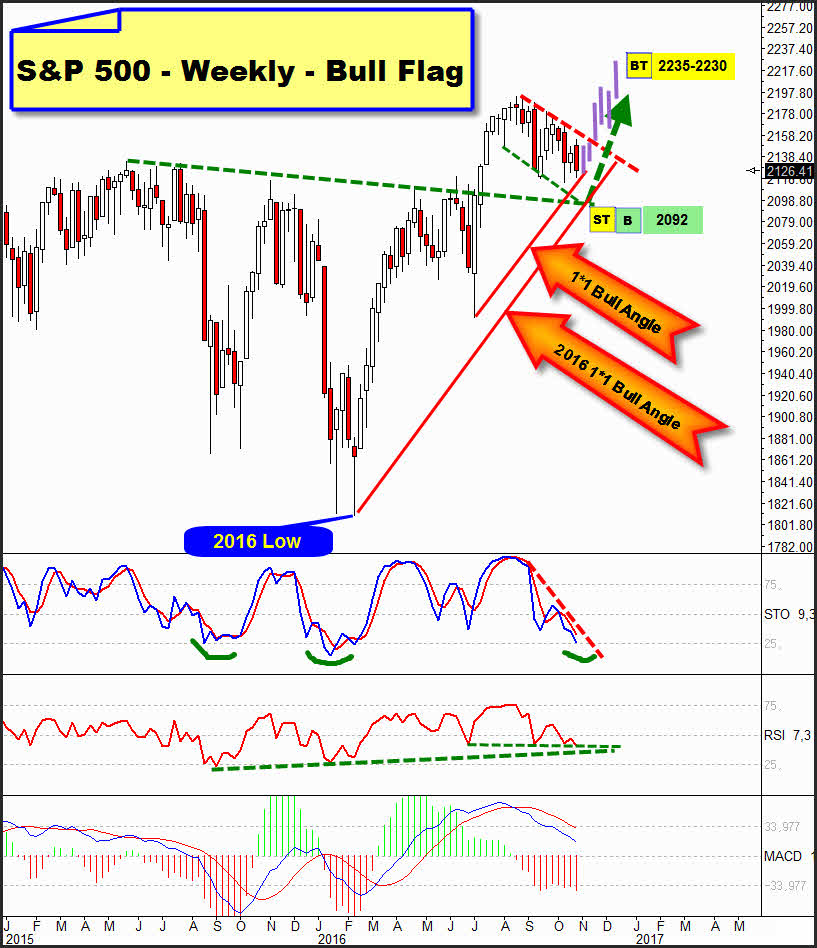 The momentum in the weekly time frame that keeps on falling most hesitantly is now permitting that possibly the index won’t be able to hold/defend the current pullback lows, so it may still go a blink lower down to the 2092-2090 pts till the vote decision. To go much lower is actually hardly possible by the present momentum oscillator situation.

At the 2090 surroundings is where then (election week) also the existing Bull Flag support in the weekly graph is situated as well as another strong support line in the yearly time frame, depicted fat-green-dotted, that was pulverized after the Brexit referendum and whose backtest might come true now.

The 2016 1*1 Bull Angle springs from the final low of the year 2016 thus being the very most existing important Gann Support for the index. It is support in the yearly time frame! And thereby, it’s the next important strong support magnet for the market in case the 1*1 Bull Angle is really broken downwards finally.

Bearish outcome: If the index produces JUST ONE DAILY CLOSE below the ATH Support = 2115, the monster support region at 2092 will be supposed to be reached till November 7/8. At the latest from this strong support, the index should have to begin its year-end rally into the 2230-2235 main target after the vote decision!