For today I have made a look at the monthly charts of the really Big NASDAQ Guys, who burnt the house to the ground on Friday, and thus almost fired the next rally continuation signals:

We are working out their individual most trustworthy and most important supports for the month of November, to use it for the rally-entry, which should without any doubt continue into the winter of 2018. The November can sometimes offer a very lucrative long entry until about mid-month, since in the strong bull markets after Halloween (October-31) often a more or less brief consolidation-, or pullback cycle evolves. After that digestive phase typically the year-end rally starts.

==> November begins the best 8 trading months for the NASDAQ and is second best month for the Tech Stocks!

==> The year 2017 will undoubtedly be a crystal-clear and very bullish uptrend year, with final low at year open and final high made at resp. close to year-end. In this regard also note my last NASDAQ-100 forecast with its newly activated uptargets into end 0f 2017, which I informed you 2 weeks ago - please click here for refreshing.

This Tech-Berserk-Friday reminded me strongly to the buying frenzy which was often observed during 1997-1999 dot-com bubble. This time, the 3Q earnings and revenue beat of Alphabet/Google (GOOG, GOOGL) and Amazon.com (AMZN) drove the markets.

The following monthly charts utilize the secular bull market price-axis scales that are currently valid from my view! 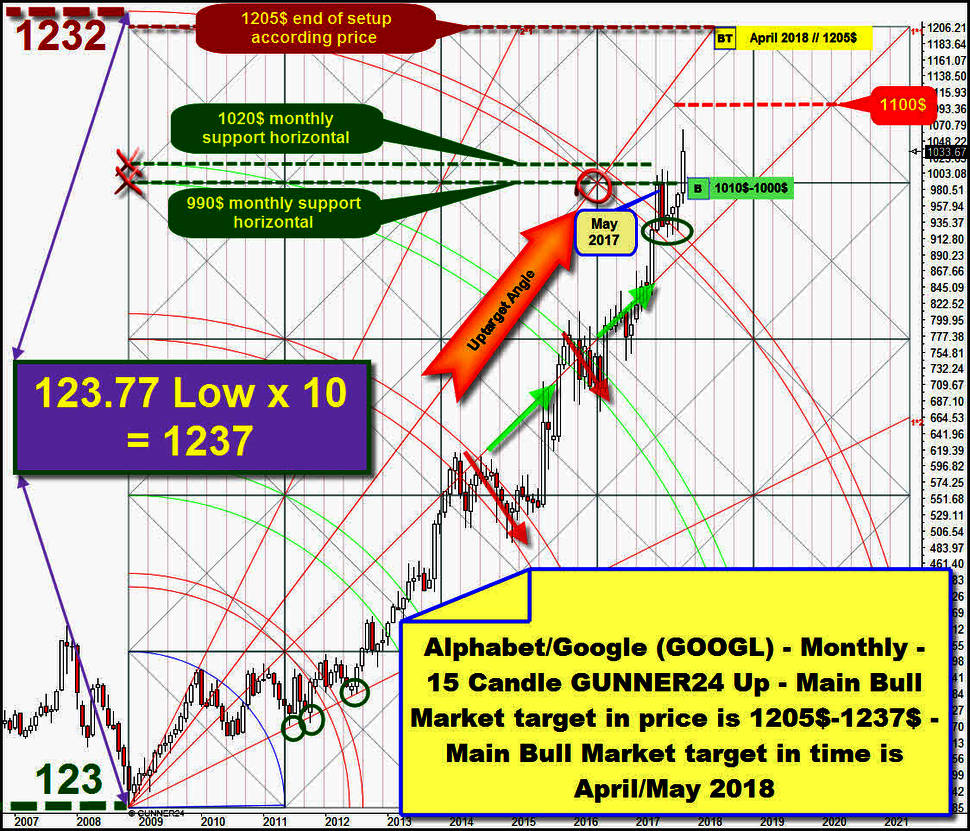 GOOGL caught by the valid 15 Candle monthly up setup which starts measuring upwards at the final 2008 bear low (123$) for the first time closed above 5th double arc main bull market uptarget and main bull market resistance at May 2017 close. This decisive month close above existing main resistance out of 123$ bear market low has activated the next higher GUNNER24 Bull Market target which is the end of setup according price.

Decades of experience shows that the upper limit of the setup - the most extreme uptarget out of bear low - will be processed with a probability of +80% within a secular bull market!

At May 2017 high the very first test of the very important "round" 1000$ mark occured. The Big Round Numbers 1, 10, 100, 10000, 100000 are always strong natural future resistance horizontals for a market, consequently GOOGL paused for some time below that BIG MAJOR RESISTANCE, but this summer 2017 consolidation cycle defended the 5th double arc breakout impressively, using that double arc as main support and as springboard for the bull market continuation into 1200$!

After final summer 2017 low was finally in at July 2017 bearish extreme, the stock was able to deliver higher lows, higher openings, higher closings and higher highs in the monthly and its getting better for the bulls, the current October candle will for sure be the highest month close ever reached and with 99.99% odd closing far above the 1000$ threshold. Without a doubt, the 3Q earnings beat is a next strong buy signal in the monthly time frame.

==> 1205$ upper end of setup main bull market uptarget/main upmagnet resistance could be tested for the first time in course of April 2018, then the naturally anchorable Uptarget Angle out of 2008 bear low intersects the upper range of setup. End of setup according price and Uptarget Angle form very attractive Main Bull Market upmagnet which is 1205$/April 2018.

The very last up extension out of 2008 bear market low is at 1232$, which springs from intersection point of upper line of 5th double arc with the starting point of setup. And this allowed and possible main bull market target is for sure quite interesting regarding price/time connection because its close to that relationship:

The other Sarge - Amazon.com (AMZN), and this is quite amazing, has the same GUNNER24 Main Bull market target as GOOGL. Can this really be coincidence?: 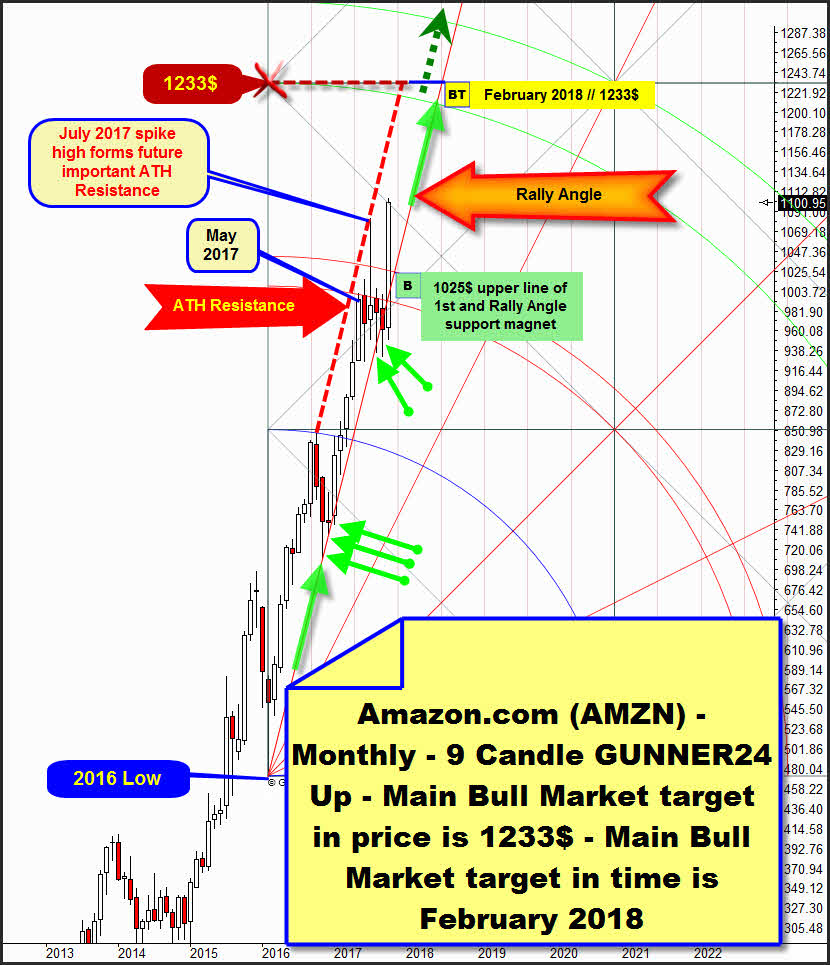 I think it is unnecessary to talk a lot about the current October 2017 candle development, this is MEGA-Buy candle speaks for itself.

The 3Q earning beat, the final break of 2nd double resistance environment and the decisive overshoot of the "round" 1000$ threshold finally activated the next higher lower double arc line in bull market direction which is the lower line of 3rd double arc.

AMZN and GOOGL have same bull market uptarget according the price factor!

==> Please buy 1025$ dip till end of November, that is at upper line of 2nd double arc and Rally Angle, both rails forming usually very strong monthly support magnet. Both rails could be tested back in course of 11-2017!

The youngest member of the Tech Gang is Facebook (FB): 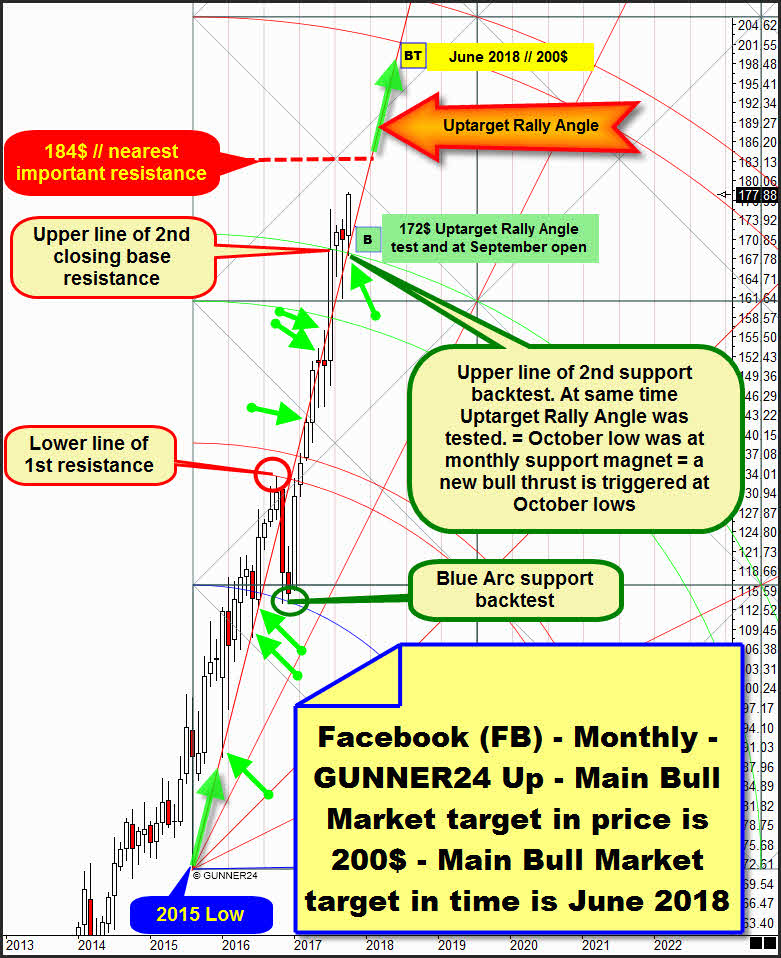 Summer 2017 tested that arc magnet pretty intense from above, but FB closed far above upper line of 2nd double arc resistance. That next strong monthly buy signal was triggered at August 2017 close.

Currently the Uptarget Rally Angle is main bull market driver! Angle was re-conquered in course of 2017 and was successfully tested back at the summer 2017 lows and triggered a new bull leg. Angle usually will hold and should push higher until next bull market uptarget is finally worked off!

Uptarget Rally Angle always offers Gentlemen`s long entry until lower line of 3rd is worked off finally, so consequently buy a 172$ dip in course of November 2017.

Let`s get to the Big Boss at the end of this issue. He`s getting ready for the next bull stampede - Apple (AAPL): 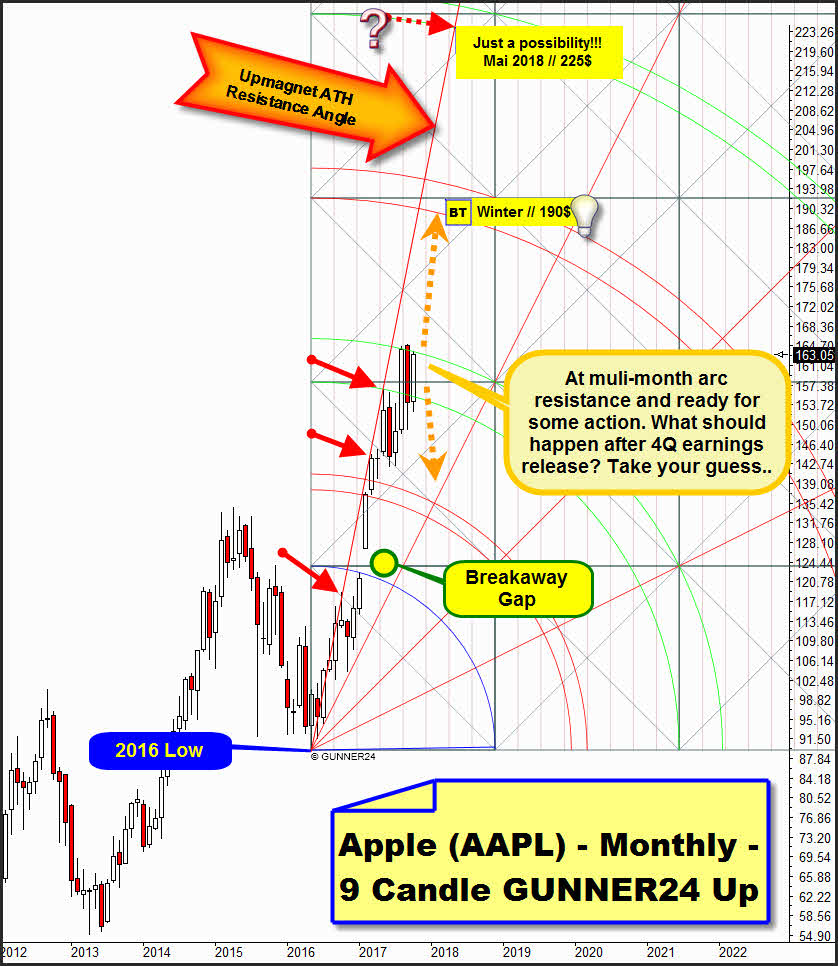 On November 2, Apple Inc. is expected to report results from its fiscal 4Q and offer financial guidance for its 2018 first fiscal quarter.

What do you think will happen with the Apple stock after 4Q earnings release? I suppose that the November 2. call triggers next massive strong bull market signal. Think APPL aims lower line of 3rd upmagnet which is at round about 190$ for winter 2017-2018!

==> This bull market has a ways to go in price and time!

Be a part of our exclusive sworn GUNNER24 Trader Community – now... I`m going to show you the way to trade successully the just started next strong Tech Stocks upleg!