The clouds over the precious-metal sector are becoming darker and darker. The next thunderstorm is approaching already. The next selling wave is likely to begin within the coming 3 to 7 trading days because then the most attractive = most natural countertrend targets according to price and time will have been reached resp. worked off.

In the focus today: Gold, the HUI und Platinum.

Gold ==> the early October downside break of the 1*1 Bull Market Angle, the weekly 2nd support double arc and the 2015 high environment have released enormously strong downforces that changed the 2016 trend from up to down! 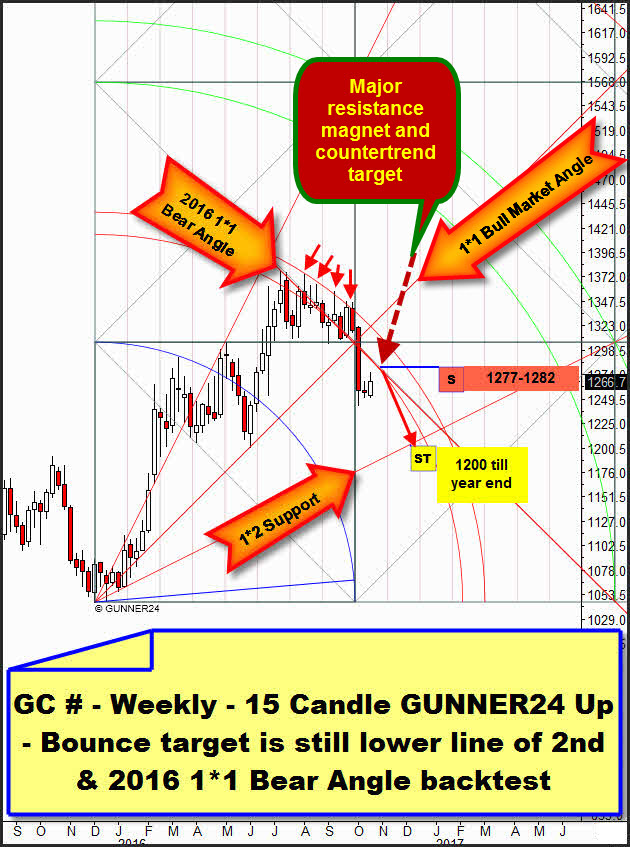 Above, the dominating weekly GUNNER24 Up Setup for Gold. Since the 1*1 Bull Market Angle is broken downwards finally, with more than a 90% of probability – AT LEAST – the 2*1 Angle will have to be headed for in the course of the current downtrend.

==> Technically, after the test of the 2*1 Angle, it’s only there where this new started downtrend in the weekly time frame can come to its end.

Lately, I analyzed gold and the newly started downtrend with the help of the setup above in the weekly time frame within the free GUNNER24 Forecasts, issue 10/09/2016. In that last issue starting from the so far attained downtrend low we were able to state that with a probability of a 70% gold would start a bounce to bear either 1 or 2, at most during 3 week candles. With the next week candle, we’ll be at the 3 now!

Out of the four important precious metals gold, silver, palladium and platinum gold was actually the one that performed the healthiest bounce since the lows. Though, besides a visible weekly plus the bounce week # 2 could present a higher low, a higher high and a higher close, compared with bounce week # 1. At all, it wouldn’t be worth going into the totally washed-up bouncing activity of the white precious metals silver, palladium and platinum. Any second or line on this item would be squandered. Below, I’ll impart you more about the super bearish situation of the white precious metals, beneath the monthly platinum chart.

The 2016 1*1 Bear Angle has its origin in the final high of the year thus being a resistance in the yearly time frame. Below the 2016 1*1 Bear Angle, gold is in an absolutely confirmed downtrend. Since it keeps on being quoted far below the 1*1 Bull Market Angle now (origin is in the December 2015 bear market low), it is in a double confirmed downtrend mode thereby being always short now in a foreseeable future!

A backtest of the currently strongest resistance magnet in the yearly time frame, formed by the lower line of the 2nd double arc resistance and the 2016 1*1 Bear Angle seemed resp. seems absolutely obvious for the present bounce since this major resistance magnet is situated under the purview.

==> I think, within the next 3 to 7 trading days, the major resistance magnet = the countertrend uptarget will be worked off. I presume, the countertrend will top out then finally between 1277$ and 1282$.

==> After the countertrend target being worked off, gold will be supposed to sell off then swiftly and stably into the 1*2 Support Angle = test of the "round" 1200$ mark in December 2016.

The so far last Gold Miners consideration in the public area ensued within the 10/02/2016 free GUNNER24 Forecasts. Then, I advised to enter longs at 193-194 pts:

The October downtrend low was achieved at 195.49 HUI pts on 10/11. From that point, the HUI began bouncing. The 193-194 pts entry was to ensue at the absolutely strongest horizontal support of the HUI, an important decade support. Close but no cigar! The fact that the current downtrend did not reach/worked off the decade support, doesn’t mean any good in my view. Therefore, in the Miners sector there is more hardship threatening for a long time. I think the Mining Stocks will not be supposed to continue the still confirmed strong bull market without a genuine, serious backtest of the 193-194 decade support!! 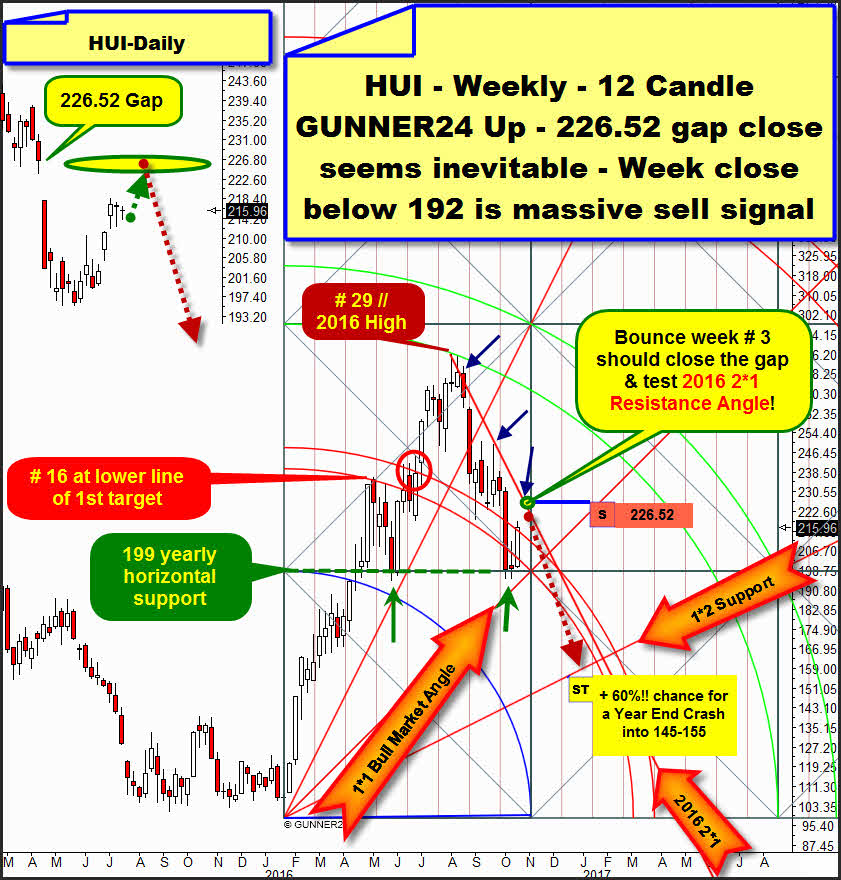 I’m afraid now, that a brutal Year End Crash might be in store for the Mining Sector. Chance for this to happen is at scarcely more than a 60%!

Self-evidently, the 2nd double arc is most important resistance far into the year 2017, because a final year high was attained there.

Visibly, the 199 pts first square line nails the important May 2016 correction low and the current downtrend low at both green arrows.

==> Since April 2016, the HUI was not allowed to deliver any weekly close below the 199 pts first square line. Thus, the 199 is now support horizontal in the yearly time frame, therefore now the most important support for the short and near-term future! Ergo: Technically, every future weekly close far below the 199 pts (192 should be enough because also the 193-194 decade support would fall with that…) will trigger a next massive selling wave. According to Cocker, this one should have to make break the 1*1 Bull Market Angle loosely and easygoing thus activating the 1*2 Support Angle as the next important downtarget for the current downtrend. Thereby, a sell-off may quickly reach the 1*2 Support Angle till December 2016/January 2017 – at about 145-155 pts in that case.

I don’t know, why has the downtrend neither tested yet the 193-194 pts – decade support – so far nor the 1*1 Bull Market Angle???! I think, the answer is perfectly clear… That will still have to come, it’s still on the agenda!

Now to the present bounce analysis. With the next week candle, the 3rd bouncing week is due now. Confirmed dominating future downtrend resistance is now the 2016 2*1 Resistance Angle. I assume now that the HUI will work off this major yearly resistance at the third lowermost blue arrow within the next 3-7 trading days. For the next – the third – bouncing week, the 2016 2*1 Resistance Angle takes its course most exactly at the important daily gap that is still open at 226.52 pts.

==> Conclusion: The bounce of the precious-metal sector is supposed to go still a little further and a little higher. At least, that applies to gold and the Gold and Silver Miners. I think, in case the HUI closes the gap at 226.52 during the coming week resp. within the next 3 to 7 trading days, from there and then the next intensive and relentless precious-metal sector downtrend wave shall start into the year-end.

Now to the super bearish platinum, as mentioned initially. I think, in this special case a chart says more than a thousand words. 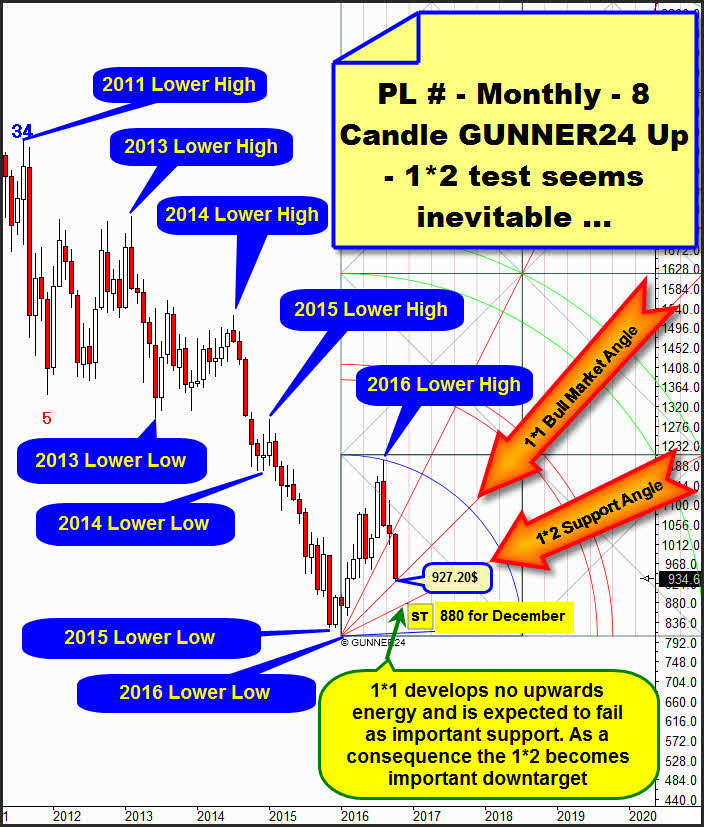 With a 90 % of certainty, I keep on thinking that the precious-metal area is not yet situated in a new bull market. I keep on thinking that this sector – perhaps excluded Gold and Silver Mining Stocks – is willing to reach some new lower bear market lows in 2017. Just have a look at the lower lows and lower high series of platinum since 2011. How can the whole sector be in an overall bull market if platinum performs that negatively, is what I’m asking myself…?

By all means, platinum is newly at the crossroads now. The 2016 countertrend going from the 2016 low into the 2016 high is now corrected down to the 1*1 Bull Market Angle. The huge problem of the platinum market – and thereby of the entire precious-metal sector – is that this important 1*1 Bull Market Angle doesn’t seem to be able at all to trigger even one mini bounce in the daily time frame. The 1*1 Bull Market Angle has acted quite weakly so far. The metal doesn’t develop any up-force, it tarries at the 1*1 instead. Just to remind: If that one falls, the metal will be again in the confirmed bear market in the monthly time frame. And in succession, with a +80% of probability, platinum would deliver another lower low in the yearly time frame, in 2017 as well.

Well, in any case, platinum is currently the most promising short candidate of the sector. Just sell it, no matter at what price when A) either gold will have reached the 1277-1282 resp. when the HUI will have closed the 226.52 gap. If the present platinum downtrend low (reached last Friday at 927.20$) is fallen below then once more, in succession platinum will be expected to work off the monthly 1*2 Support Angle swiftly.