Prepare for a stock market pullback

After our rally announcement last week the stock markets started a strong bull run. Chiefly the NDX gleamed with +7.65%, but also the Dow Jones and the S&P 500 laid down a strong rise with a weekly plus of 5.65%. Including last Friday, the rally has been lasting as many as 9 days since the low of October 4: 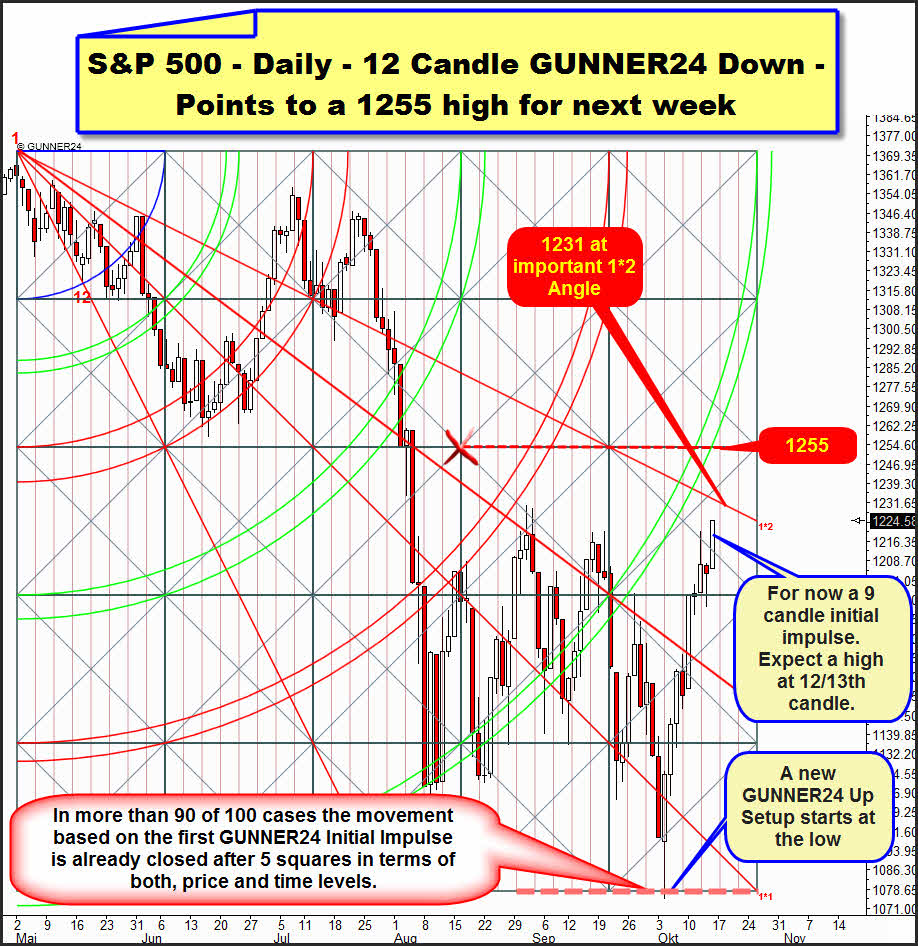 The actual daily 12 Candle GUNNER24 Down Setup is showing us that in terms of price the maximally possible down target of the original 12 candle down impulse was reached by the October 4 low. Now we can assume – with a 90% of probability – that the low we’ve seen so far was the final low on daily basis starting a new GUNNER24 Initial Up Impulse at the October 4 low which has been lasting 9 days until now.

According to the rules we can furthermore work on the assumption that the initial impulse will probably end near the 13th day, seen from the Fibonacci-count since the Fibonacci number 8 was already exceeded by the 9th candle. That means that the end of the initial impulse will be formed near the 13th candle (11th to 13th candle), next Tuesday to Thursday then.

First ever, the surroundings of the 1*2 resistance Gann Angle, at about 1231, but also the resistance horizontal above at 1255 are offering themselves as to be the price target. Since the market on daily basis is extremely overbought we will actually have to assume that just a brief dip above the 1231 should be possible. The maximum upside target of 1255 for this initial impulse next Thursday won’t be allowed before a closing price of far above 1231 (1236-1240) next Monday or Tuesday. Then we’ll have to expect a strong pullback from one of both important resistances! 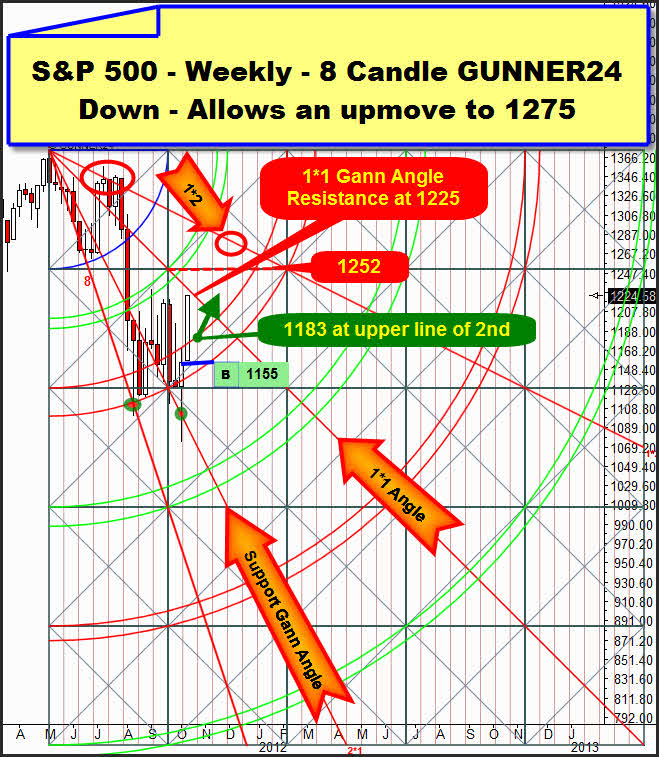 In the weekly 8 Candle GUNNER24 Down Setup of the S&P 500 we can see that as early as by opening of the trading week an extremely strong resistance will be reached which is the 1*1 Gann Angle. With Monday opening at 1225 this Angle will be headed for, and that one is supposed to exert its resistance influence during the whole week. This 1*1 Angle can’t really be broken upwards persistently at the first try. Correspondingly the market is expected to maintain its position above at most for two or three days not being able (not even with the maximum bull-euphoria) to reach more than the 1252-1255 area – as the daily 12 Candle GUNNER24 Down Setup is showing already. The market is supposed to turn downwards again at the latest from this 1252-1255 area, but more likely from the 1231-1234 mark already.

That’s why we’ll cover our weekly long position by reaching the 1231 in the course of next week.

Ideally, after the expected rebound from the 1*1 Gann Angle the market would have to drop back again at least onto the upper line of the 2nd double arc (1183) before the maximum target of the actual rebound at 1275 should be headed for. That’s where the next vigorous downswing move is expected to start – at the 1*2 Gann Angle. 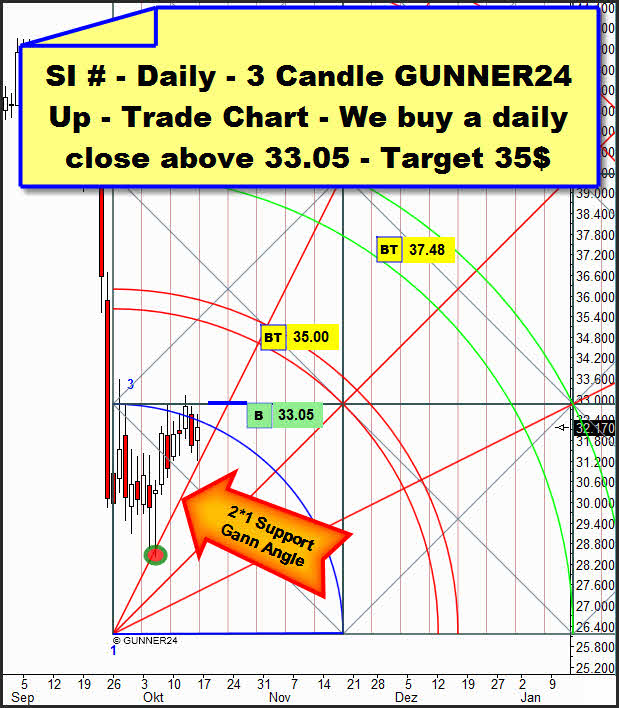 On daily basis, considering the actual daily up setup we all can see that a lot of upwards energy has accumulated in silver. For as many as 6 days another rise from the blue arc or from the upper line of the first square has been being prevented. But – since thus silver is consolidating at the highs (old trader rule: consolidations at the highs break to the upside) we’re going to get prepared to buy a closing price above the first square.

This daily 2*1 angle is very important, the conduct of the metal at the 2*1 is very important… for a closing price beneath this 2*1 Gann Angle within the first square next week would indicate that for the moment all the rally attempts would have to be blown off. Thus, the air would leak out of the boiler making possible a new test of the September low. The upper limit of the first square is representing a resistance that is too strong, you know, not willing to be broken now, but much later! 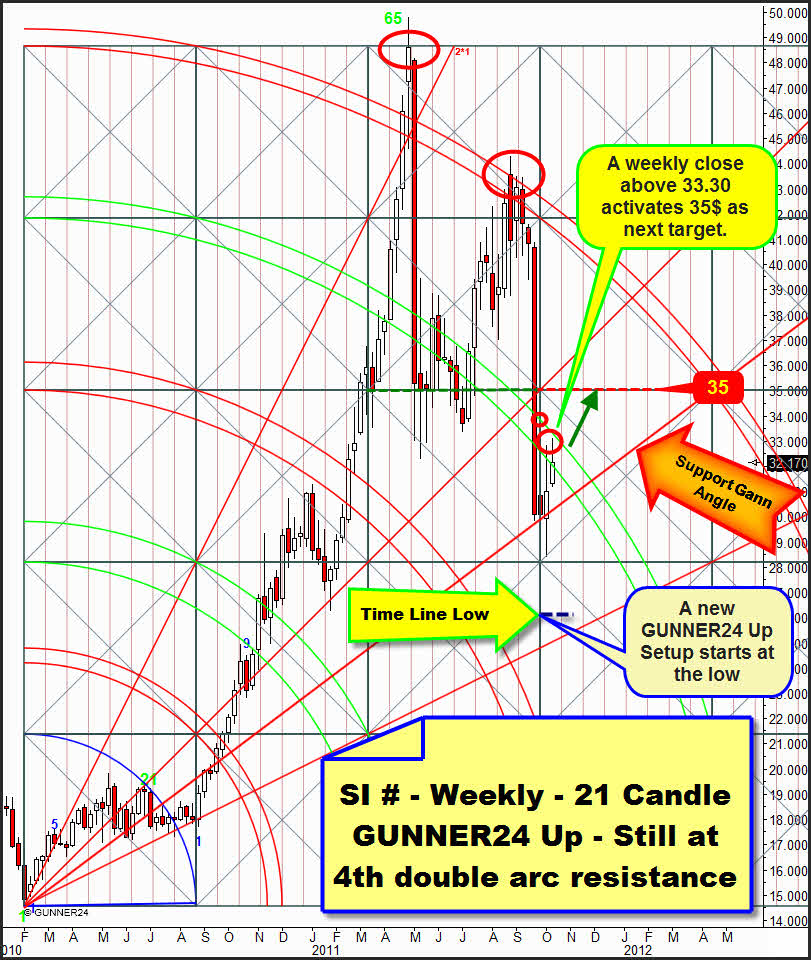 This September low was clearly marked on an important time line, so it’s supposed to be very important. It’s most likely that it represents the final low of this ABC correction of the all-time high which was marked above at the 5th double arc.

On the assumption of this realization down at the September low at 26.15 a new weekly GUNNER24 Up Setup began that is in its third week now. The initial impulse has been lasting three weeks, so in terms of the Fibonacci count it might have finished now. Correspondingly silver is expected to change course downwards now following the 4th double arc in the weekly setup above – downwards and newly testing the September low. The first indication for this course would be a day closing price below the 2*1 Gann Angle in the daily setup!

Now, please follow me in a logical way: A) If next week a higher high than last week is reached – I mean higher than the 33.10 the current weekly initial impulse will be in its fourth week already, so we may expect B) the high of the weekly impulse at least in the fifth week of the up impulse! And of course we’ll be allowed C) to suppose this course will happen if silver closes above 33.05 in the setup above. D) Such a closing price above 33.05 would activate the next target = 35$ which in the daily setup is lying at the first double arc representing the first clear point of contact after a possible break of the 4th double arc in the weekly setup as well.

The supposition of a possible silver breakout is backed by the actual weekly setup in gold: 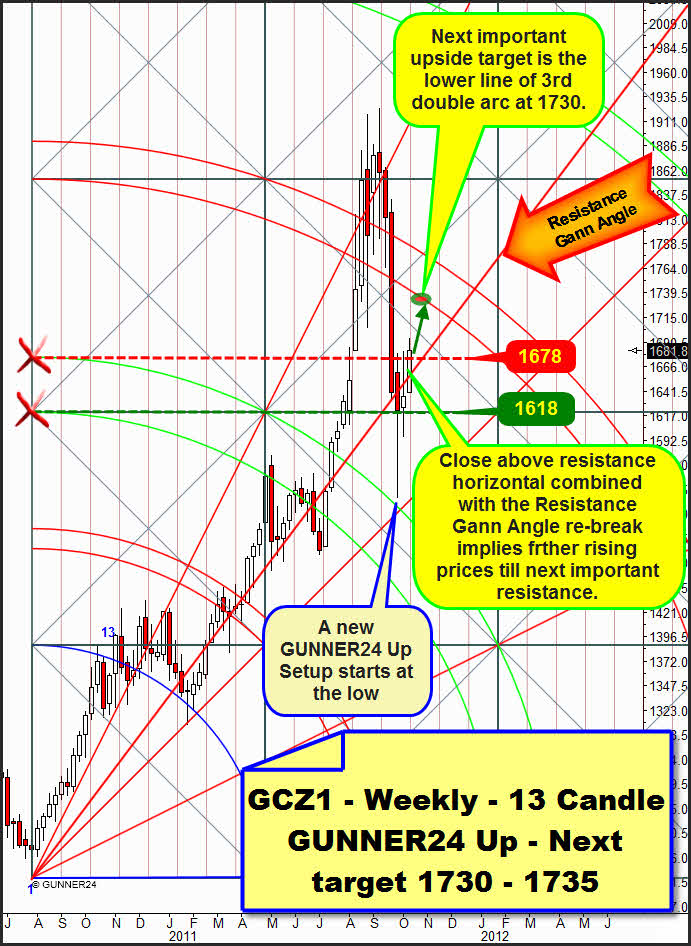 By the close of 1681.8 the resistance horizontal was overcome at 1678. In addition a resistance Gann Angle was re-conquered upwards. Such a conduct is supposed to accelerate the current ascent in terms of energy. Next target now is the lower line of the 3rd double arc at 1730-1735. This target area is expected to be reached within the next 10 trading days. The 1730-1735 represent the minimum target of the here expected weekly 5 candle GUNNER24 Initial Impulse of the September low. But maybe the upper line of the 3rd double arc in the 1760 area wants to be reached…

Such a positive development to be expected for gold increases additionally the chance of a possible silver breakout!