It`s hard to believe, but this stock market bull will not make prisoners for many more months. And he will leave a lot more slaughtered bears before the next significant correction is imminent.

After the highly constructive summer months when the US stock market indexes together with their Main Sectors and main leading stocks crawled slowly and steadily without significant pullbacks and were able to nail dozens of small higher alltime-highs into the charts - this behavior is always the typical sign of a murderous healthy upwards wave - they seem now to be able to overcome even the most ominous jinx October completely unscathed.

==> The US stock markets will act for the next 6 months more or less exactly as the last few months! Always higher. Without a lot of feather reading, without any significant corrections!

Let me prove these theses in consequence with the help of GUNNER24 Up Setups in the monthly scale. 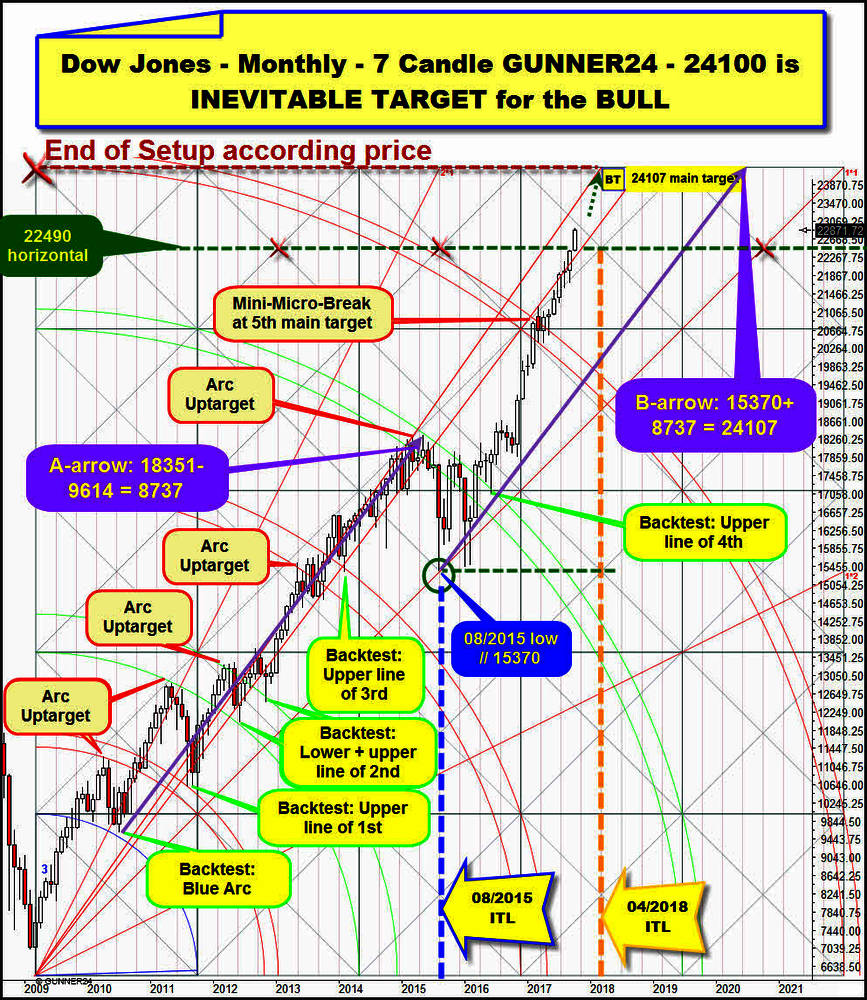 Setup is a 7 Candle up starting at year 2009 bear market low. The Dow Jones bull market follows this setup and its objectives!

2009 to 2015 uptrend respected the existing natural uptargets of the bull run which are always the future calculated GUNNER24 Double Arc lines out of the initial up impulse range which always starts measuring at an important low. Above in the monthly I´ve noted and highlighted the mostly very precise hits of some important month highs and lows at the natural bull market arc upmagnets.

All these highlighted bull market extremes at Blue Arc, 1st, 2nd, 3rd and 4th double arcs have marked significant turns in the bull market and were either important highs at arc magnets, ringing in a pullback, consolidation or correction or show successful backtests of former upwards broken arcs, by the time confirming these highlighted arcs as future important support trails.

The February, the March and the April 2017 candles were influenced by 5th double arc resistance function, but that double arc was just a marginal hurdle for the strong bulls. The best they could reach then was a "red" March candle, since Dow Jones nails a series of higher highs, higher lows and higher closings into monthly chart. This is most bullish behaviour imaginable...

==> Always when the Blue Arc, & the 1st, & the 2nd, & the 3rd, & the 4th double arcs obviously have been respected within an upleg and within an up setup the final overcome of the 5th on closing base signals that the End of Setup according price will be reached, tested and worked off within running upleg! This rule has a 90% odd to come true!

==> Please observe now that the Dow Jones leaves anchored 22490 horizontal to the upside. This horizontal is/was first time tested at October 2017 low and open, and because this threshold can`t lead even to a negative reaction there is actually only thin air above and until End of Setup according price is reached = 24100 index points.

There is a beauty in symmetry developing. But only with regard to the price factor...:

The initial 4th double arc rejection was deepest and longest correction of the bull market. Next watch where and when this correction low was made/has arrived. Precisely in the middle of the whole 7 Candle up setup. It was made in the CENTER of the setup, which is at 15370pts for the August 2015 candle! = fat-blue-dotted vertical is important time line (ITL), the 08/2015 ITL.

Adding the A-arrow advance that is 8737 to 15370 low gives 24107 and this is 100% equal to the End of Setup according time. This B-arrow calculation/possibility leads to the outcome that Dow Jones will test 24100 with a 95% odd before a next stronger pullback, correction, pause in trend is allowed to start!

==> the market should continue to pull through until 24100pts is worked off!

Dow Jones could test its 24100 main uptarget in course of April 2018! Then the next ITL, the 04/2018 ITL awaits the market. The 04/2018 ITL could have the same importance according an important bull market turn as the previous important 08/2015 ITL, could possibly trigger the next important bull market high, at least she points to the outcome that the Dow Jones is backed by strong bullish forces until April 2018! 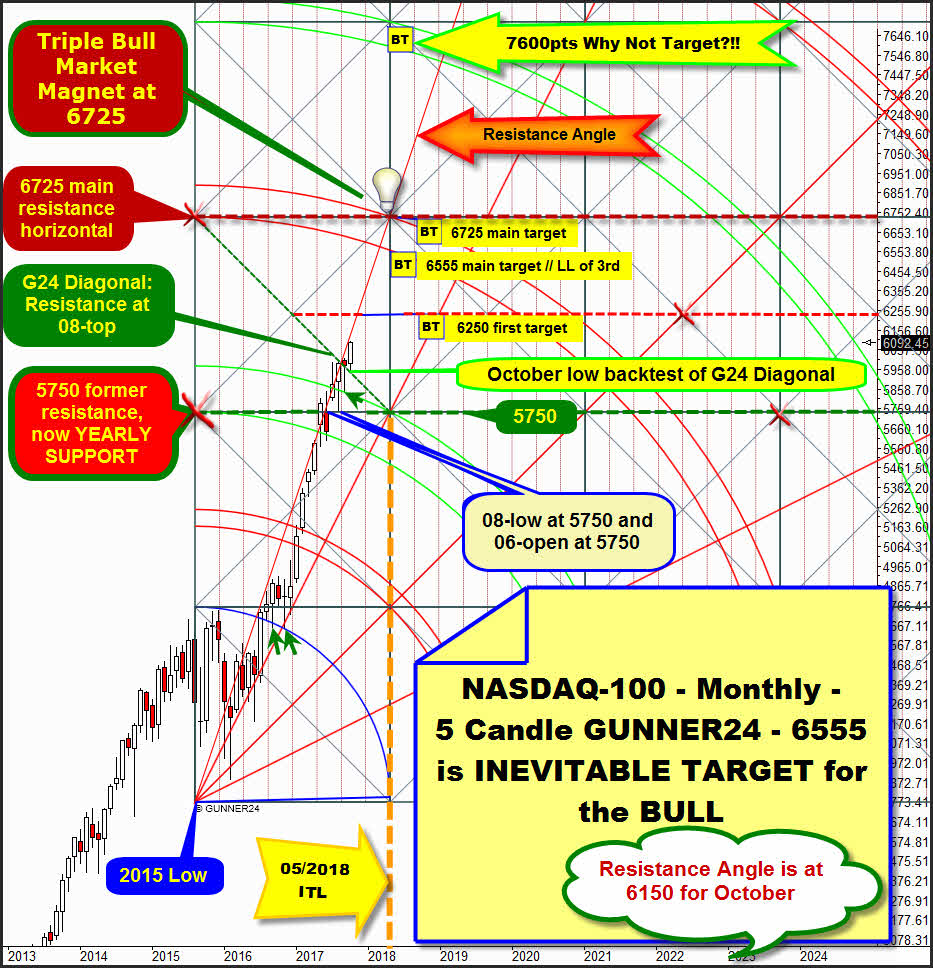 Nothing seems to be able to stop the tech stocks and the tech indexes. The bears are being run down. Higher and higher is where Alphabet = Google, Amazon, Apple, Facebook, Intel, Microsoft, Netflix has to go! Overbought…!!? Screw it…The NASDAQ-100 is heading the herd again now. And not even for a second you should think in the possibility that the above mentioned companies or the NASDAQ-100 might cede again this powerful position in the course of the year.

==> Usually the NASDAQ-100 is backed by strong bullish forces until May 2018 candle is on agenda!

In course of summer 2017 the magnets around, resp. at 2nd double arc where highly respected: The June 2017 close was supported by the former upwards broken lower line of 2nd. The June open was at 5750 GUNNER24 Horizontal, additionally the final August low was backtest of the 5750 GUNNER24 Horizontal. 5750 usually has morphed to strong horizontal support in the monthly AND YEARLY time frames!! now falling arc trail as future important support in the monthly.

Current October 2017 fires next buy signal on monthly base because the highlighted G24 Diagonal backtest is a very positive one. The G24 Diagonal was resistance at August top, was overcome on monthly closing base at final September close and successfully tested back at October 2017 low. The positive test of the G24 Diagonal has usually triggered a next stronger upwave, it seems that next higher important resistance which is the 6250-midle of current square horizontal resistance could be reached until year end. At least!

So 6250pts resistance horizontal is now closest important uptarget above current quotations, an open uptarget for the year 2017!

But bears watch out: Any next monthly close above the Resistance Angle is another very strong buy signal!

==> If such bullish close above a main rally driver will occure in course of 2017, this bull run will gain much more traction! And of course we should expect such bullish acceleration when an uptrend comes close to its end, or is expected to print a perhaps very important bull market top at the end of the "Best six months period November-April"!

This bull market could even test and work off the 6725 GUNNER24 Horizontal out of lower line of 3rd double arc until May 2018 without pulling back or showing a longer consolidation in the monthly scale. The reason for it is because the 5750 horizontal out of lower line of 2nd double arc and the first square line have been important and respected magnets within the bull run, and the future market behaviour simply likes to orient itself to magnets of the same kind which were important in the past.