Stocks and Gold into US Election

In the course of next week, we’ll certainly see the final decision on the question whether the broader US stock markets will have to take another shortterm breath before the year-end rally will start around the US presidential election date (11/08), respectively – and this is the scenario to be preferred with a 65% of probability – the US stock markets ensuing from the lows of the trading week to come, will start their next significant upleg that is supposed to top out shortly before the US election date achieving some new alltime-highs.

First of all, the current trigger marks and targets of the S&P 500:

The accomplished lows after the Brexit referendum have a special meaning for the broader US stock markets, given that they finalized significantly higher lows in the uptrend year 2016.

The S&P 500 rose impulse-like from the Brexit referendum low to the current alltime-high (ATH) and year high = 2193.81 pts. This first initial impulse lasted for 8 week candles = classical impulse that oriented itself cleanly by the important high 8 Fib number.

In case the Blue Arc is taken upwards, the next higher important resistance and uptarget will be the first square line at 2200.50 = equal to the "round" W.D. Gann 2200 number.

So far, the Blue Arc resistance has not led to a strong downwards bounce. Rather tenderly the market is testing the ATH arc from below. The S&P 500 is consolidating scarcely below this mighty arc resistance, and this is to be assessed clearly bullish!

Last week’s low shows a bounce from an existing natural Support Angle. So I think that in the course of next week, the decision will be made whether the market will have to go up till the election resp. whether it’s willing to keep on consolidating/correcting till the election!

Buy and sell trigger for next week incl. targets:

If the Support Angle – taking its course at 2150 pts next week – is significantly fallen short on weekly closing base… 2148 should be enough… the very first test of the 1*1 Bull Market Angle combined with the green dotted existing former ATH Support at 2110-2115 will be on the agenda till the election! From there and then, the year-end rally will be likely to start going up to the 1st double arc and working off the next very important main target = monthly and yearly uptarget at 2230-2235 through year-end/beginning of January 2017.

For next week, the Blue Arc takes its course at 2170. Of course, its final being overcome… a weekly close above 2172 should be enough… will be supposed to lead the S&P 500 immediately up to the 2200 first square line resistance till the US election.

Technically, the index should have a hard time overcoming sustainably the 2200 at once. After being reached the 2200, thereby a next multi-week consolidation/correction leg should start, but who’s to know? A weekly close above the Blue Arc nearly always leads to a serious test of the 1st double arc. I can thoroughly imagine that being successful Clinton may lead to a new rally thrust up to the 2230-2235!

Up next is the now important trigger marks and targets of the NASADAQ-100: 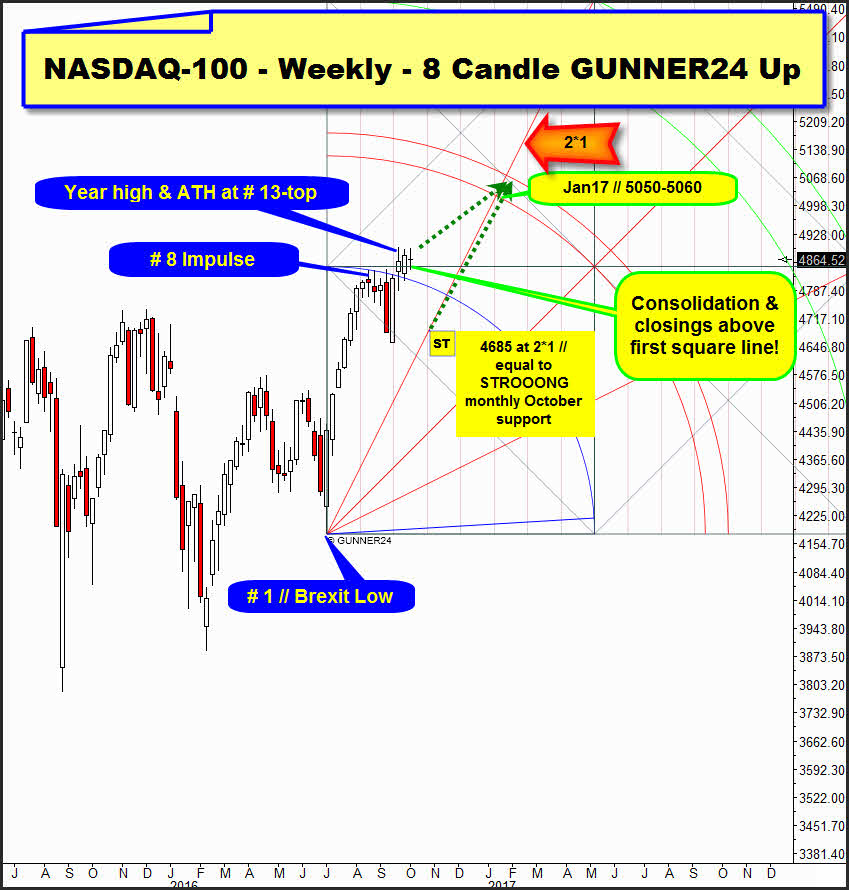 Let’s begin the NASDAQ-100 analysis with a very important realization. The absolute leader of the bull market year 2016 has been performing in a significantly more bullish way than the S&P 500, but also than the Dow Jones etc.:

Visibly, the NASDAQ-100 – likewise the S&P 500 – topped into a classical Fib number 8 high after the Brexit Low. Yet the resulting important Blue Arc and first square line resistance were overcome significantly on closing base three weeks ago already thus being activated a next important upwards target at the lower line of the 1st double arc and 5050-5060 till January 2017. The probability of this price/time target to be worked off there and then is at a 75%.

Well, well. The present year high = ATH again was achieved after precisely 13 weeks of up impulse. That led to the following 13 Candle up that again is much more important for the market than the 8 Candle up. 13 is a higher Fib number than 8, consequently the signaling of the 13 up is currently much more important than the one of the 8 up: 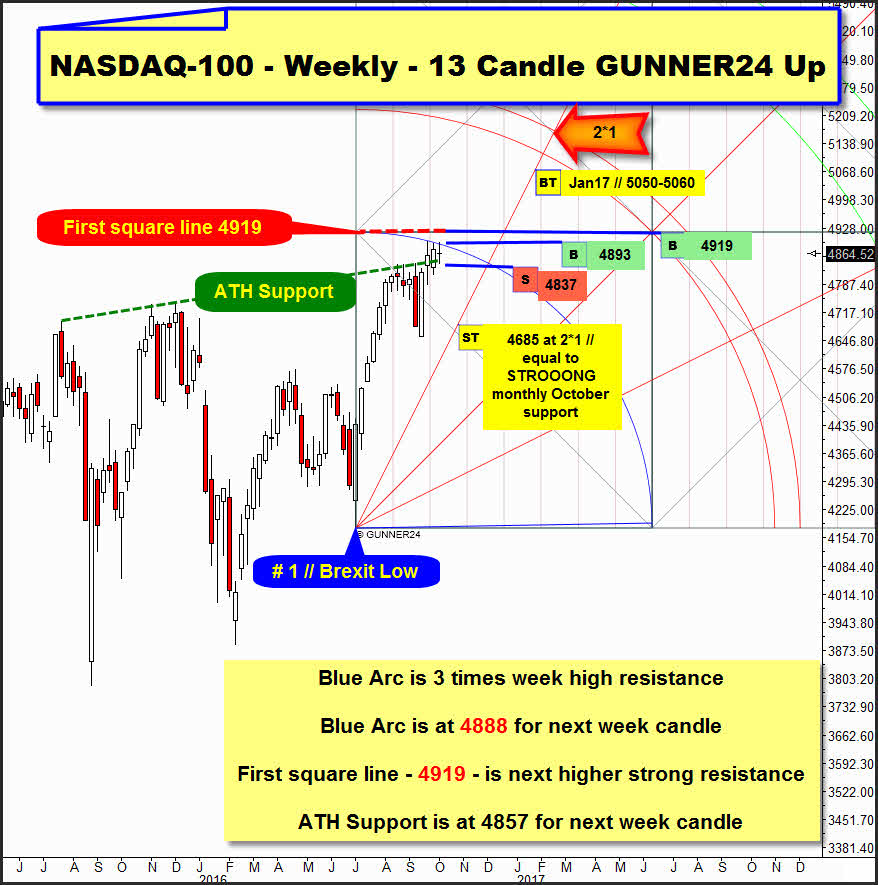 More and more, the NASDAQ-100 is also urging itself to make an important decision. From below, the extremely important green dotted ATH Support is backing. For the first time, this former ATH resistance was overcome on closing base three weeks ago being currently put on underneath an intense backtest. If the ATH Support doesn’t defy and the index closing significantly below the ATH Support next week, the leader will be supposed to carry out the first test of the important 2*1 Support Angle till the election.

==> Sell signal: If the NASDAQ-100 closes very clearly below the ATH Support (at 4857) next week… a weekly close below 4837 should be enough… the 2*1 Support Angle will be supposed to have been worked off at 4685 into the US election. That’s where also the very strongest October support in the monthly time frame is situated. If the 2*1 is worked off, from there the year-end rally into 5050-5060 should have to begin.

==> Buy signal: The Blue Arc is now the very most important resistance = 3 times negatively tested ATH and yearly resistance arc. The Blue Arc is at 4888 pts next week. This point being overcome finally + significantly… a weekly close above 4893 should be enough… will lead the market immediately up to the 4919 first square line area till the US election. Afterwards, the same thing stated on the S&P 500 will be valid:

Technically, the NASDAQ-100 should have a pretty hard time overcoming at once the 4920-4925 sustainably. Consequently, after being worked off the 4920-4925 a next multi-week consolidation /correction leg will be supposed to start, but who’s to say…

Currently, the scenarios sketched above for the NASDAQ-100 resp. S&P 500 have by far the highest probability of all the present put-outs of the GUNNER24 Method. They all indicate Clinton to become president – while we’re working on the assumption that Trump becoming president would have to lead to distortions and uncertainties in the stock exchanges!

Gold into the US election

I might certainly lament for two or three Sunday issues on the non-comprehensible fundamental reasons as well as the chart- and wave-technically absolutely lowest likelihood why gold ultimately dissolved downwards the triangle consolidation formed in the course of the summer that had depicted in an extremely bullish way. That wouldn’t help any Gold Bug + trader however.

We’ll have to live now with the highly probable consequences that result from the brutal sell-off of the past 5 days and the significant break of the uptrend.

At last, there was a high-likely expectation - please check the free Forecasts, issue 09/25/2016 – about the next = second serious test of the 1*1 Bull Market Angle in the weekly time frame to lead compellingly to a continuation of the 2016 uptrend that was to reach 1422 then till January 2017:

The following happened instead…: 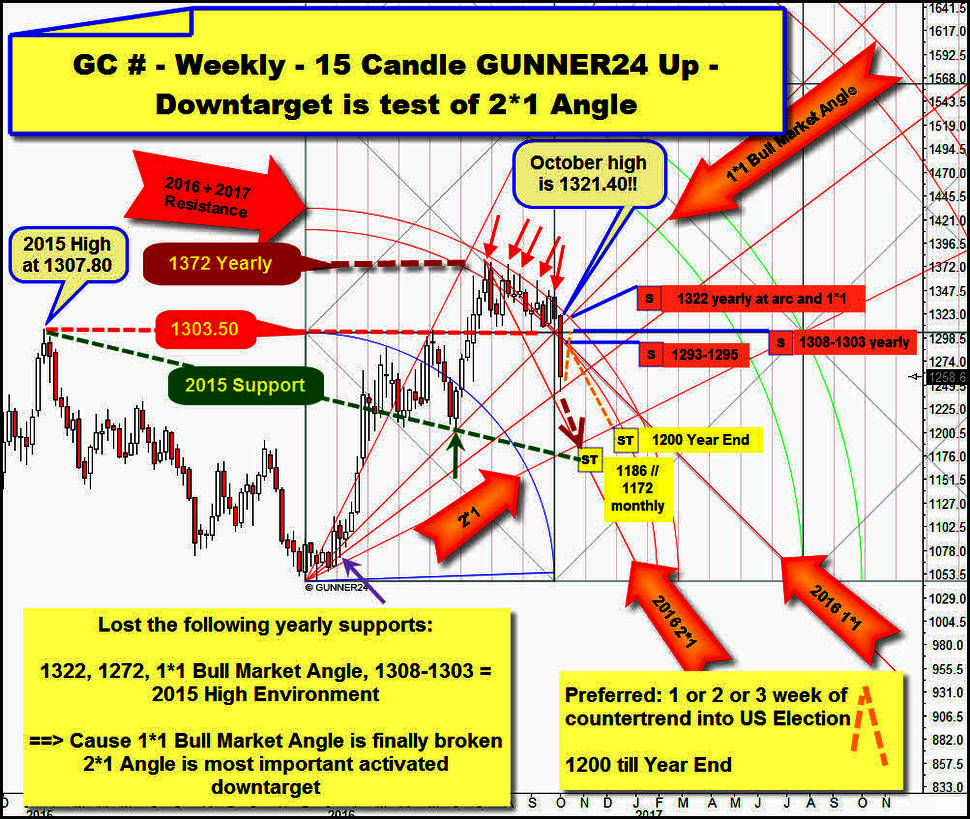 The week started quite normally. Monday was the very first trading day of the new month of October, after all.

The Monday high reached 1321.40 thus testing once more the 1322-GUNNER24 Yearly Pivot Horizontal from below. Therewith, the sell-off began. On the first trading day of the new month, the 1322 magnet triggered the most recent sell-off panic move.

The 1*1 Bull Market Angle was at about 1310-1308 for last week candle, thereby on the same level as the absolute high of the year 2015. Well, starting from 1310-1308, technically gold should have finished its consolidation by the highs at the first double arc starting a new weekly upleg - just like it did at the first serious test of the 1*1 Bull Market Angle during the May correction low – watch the green arrow. But on Tuesday 4th, at first the 1307.30 was reached, thereby falling shy below the 1307.80 high of 2015. The following 5 minutes candle tested again the 1307.80 at the high, and immediately after this "negative" backtest of the 2015 high, genuine panic broke out. 5 hours later, also the 1272 was fallen below – on the 4th of October.

==> The downside break of the 1*1 Bull Market Angle and the 2015 high environment has released enormous strong downforces who changed the 2016 trend from up to down!

==> Thereby, in the course of the week gold lost:

A) The 1*1 Bull Market Angle, that had been the most important bull support angle for the entire year 2016.

E) And especially bad for the Gold Bugs: The first double arc is now confirmed resistance, even until the spring of 2017.

The very most important resulting signal according to price and time of the last sell-off week is now this, according to W.D. Gann`s important Gann Angle Trading Rules:

Since the 1*1 Bull Market Angle is broken downwards finally, with more than a 90% of probability – AT LEAST – the 2*1 Angle will have to be headed for in the course of the current downtrend.

==> Technically, after the test of the 2*1 Angle, only there this new started downtrend in the weekly time frame can come to its end.

Now, the 2*1 test may occur very fast and swiftly = scenario A = red dotted arrow forecast with a 30% of probability: Because the month began falling on the first trading day already, October may become a brutal downtrend month with high at open and lows near/at close. Thus, till the election, the 2*1 Angle test (indeed being at about 1186 for early November) may ensue together with the 2015 green dotted support – for early November almost pinpoint at the 1172 monthly GUNNER24 Horizontal Support!

==> A strong indication for scenario A) to happen would be if gold doesn’t succeed in exceeding the 1272 sustainably on daily closing base within the next 3 to 6 trading days!

Or - and this is the scenario B) = orange dotted forecast to be preferred now with a probability of a 70%:

Since the low of the week came in precisely at the Support Angle, just as it did before at the purple arrow, now a countertrend/snap back bounce will follow lasting either 1 week candle or 2 week candles resp. at most 3 week candles. I prefer a 2 week countertrend during 2 candles…

This 1, 2 or 3 week countertrend usually will have to test back the lower line of the 1st resistance double arc before the next weekly downleg begins that would have to work off the 2*1 Angle at about 1200 in December 2016. Since the current low of the gold bear market was marked on December 3, 2015, according to the time factor the first December week 2016 (give +/- 2 days) is downright suggesting itself as next significant low of the current weekly downtrend.

If gold achieves the delivering of the very first significant weekly close above the 1st resistance double arc within 4 week candles – in this and only in this case! – gold will have succeeded in resuming its bull trend again. The result would be the 1422 to be worked off till March/April 2017.