When it comes to analyze the Gold Miners I like best doing it by means of the HUI (NYSE Arca Gold BUGS INDEX). The last time I did so was in free GUNNER24 Forecasts, Issue 08/14/2016. Then I recommended to reduce the position size of the so far outperforming Mining Stocks down to a 55%-40% core position, furthermore I advised to divest the modestly or weakly performing Miners completely resp. reduce their size drastically.

The reason for those instructions was first of all the important top that became apparent in the Miners after exactly 8 months of rally/uptrend:

Whenever a swing is pending to exhaust at the important high Fib numbers 3, 5, 8, 13 etc. we have to get careful. In hindsight it was just all right to exercise high caution in the Miners for downright classically they topped into the August high at 286.05 points after exactly 8 month candles of first initial up impulse. At the same time, the # 8-August high at 286.05 pts is thereby the current year high.

The hefty August reversal candle broke important anchored Rally Angle support with the month closing price. This is an active sell signal. The now completed # 9-September candle made a lower monthly low and a lower monthly high testing back the previously undercut Rally Angle with its rather long upper wick in a nearly classic way.

Even though # 9 delivered a higher close than # 8 we have to state that the miners will have to consolidate now, possibly being forced to pause during 2, 3 resp. even 5 month candles. The first condition (2 months of consolidation) is fulfilled already with the completed September because August + September were consolidation resp. downtrend months.

==> Much more classical would be yet a 3 month consolidation/correction phase after an important 8 high. This means that the coming month # 10-October will have to deliver once more a lower low before the Miners will turn upwards again sustainably from this likely important # 10-October low. The probability of this outcome to happen is far above a 65%. So, I prefer again a small lower low for October and then upwards again till year-end.

==> If then, the # 10-October turns up again from another small lower low, till year-end some new 2016 highs will be likely to be reached!! By all means, December 2016 would newly aim at and attack seriously the 286 again in that case!

Call for action: If the HUI newly reaches the 193-194 pts in the further course of 2016, you go all-in again into the Gold and Silver Miners. There is no better re-entry into this further ongoing upwards trend! = purple dotted arrow forecast!

Let’s go now to the fat plus-sized red-arrow indication. The all-time high = ATH is in a direct mathematic resistance relation with the achieved August year-high. That makes the August 2016 high still much, much more important than it seems to be at the first glance. It’s really very important. That’s why it may have been the final high of the year 2016 already, with a 70% of probability.

It may even have been the final high of the years 2016 + 2017. Correspondingly cautious is what all the precious-metal bulls have to be resp. become now like.

After we had identified the final bottom in January 2016 (expected bounce from the very important Decade Support Angle – watch the monthly chart below), 285 pts in the HUI was the PRICE MAIN TARGET for the market from the beginning: 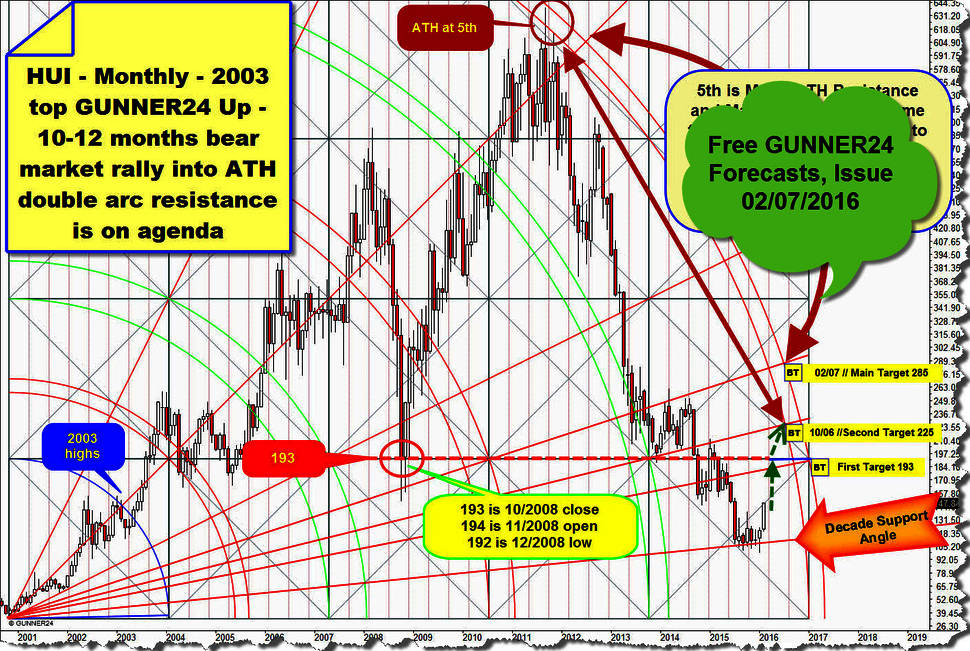 However, I expected the 285 Main Target not to be worked off before January/February 2017 after a likewise classical 12 resp. 13 month uptrend. It’s generally bullish that the 285 were reached much earlier in August 2016 because the uptrend is scheduled to 12 resp. 13 months after all. ==> So, the time is presetting at the moment that the Mining Stocks will have to rise again much?! higher than the attained 286.05 pts August 2016 high. Fact.

Things may turn out that way, but they don’t have to because the August 2016 high worked off the double arc resistance in the decade time frame as well as the ATH double arc resistance. The August high may have been the final high of this countertrend. In a correspondingly cautious and prudent way we’ll have to assess + trade the now upcoming HUI developments: 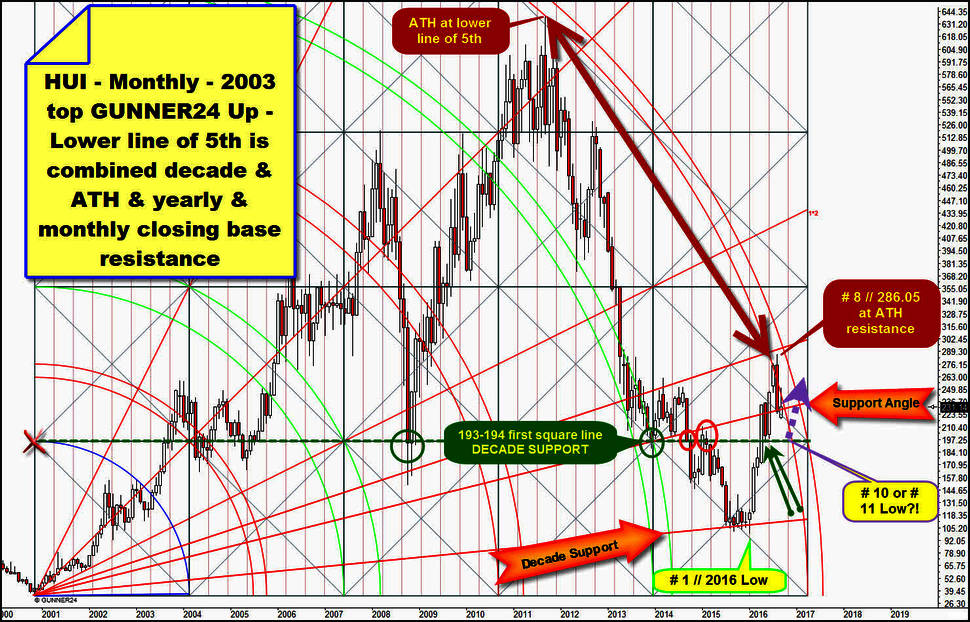 Above you see now the 2003 top GUNNER24 Up Setup in the monthly time frame, adjusted a little upwards. Now I pulled the very first initial up impulse from the 2000 low exactly up into the important January 2003 top. This illustrates the intention to set the reached ATH into the "true" relation to the first initial up impulse. Quite unlike the 2003 top setup above it, where the measure of the first up impulse mainly served the future targeting according to time and price.

Next, let’s zoom deeper into the most recent developments of this current uptrend…: 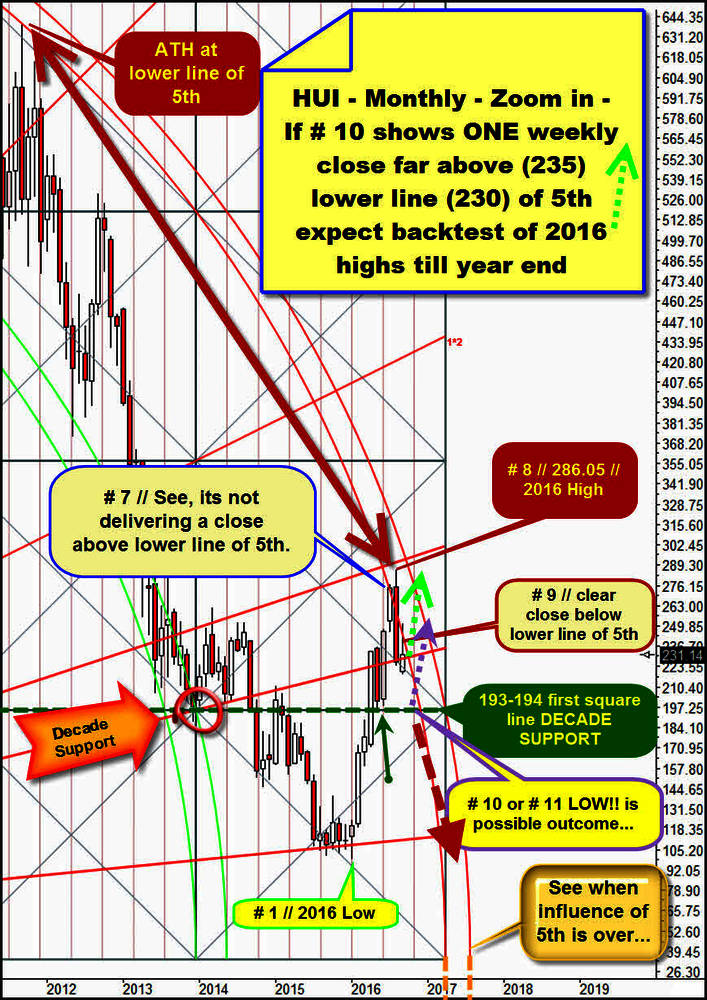 ==> Thus, the entire 5th and the lower line of the 5th have forced the HUI down since the year highs! Indeed now confirmed on monthly closing base.

==> Never yet a monthly close above the upper line of the 5th has succeeded!

==> Actually, the 5th is – and certainly keeps being for several more months – dominating resistance in the highest time frames.

==> That’s why it’s most likely of all that the HUI will have to reach and test back again the 193-194 first square line DECADE SUPPORT at the low of the # 10 resp. # 11 before the next upleg into the indeed important January/February 2017 high can start = watch purple dotted arrow.

The 5th double arc = main resistance influence will have an "official" effect till the middle of the year 2017. In mere theory and mathematically, until then the 5th should "have to" be able to exude ATH & DECADE RESISTANCE. So, it’s quite possible that the whole Gold and Silver Miners sector (likewise gold, silver etc.) in 2017 will have to reach even lower lows than in 2016!!

The Gold Miners will have to test the 2016 lows newly till mid-2017 in case the present uptrend shows a clear monthly close below the 193-194 middle of the first square & DECADE SUPPORT. 188-185 pts are certainly what it will take to trigger this next mighty sell signal. Watch red dotted arrow outcome!

==> A next important buy signal for the miners sector will not be there before a very first clear monthly close above the 5th main resistance happens, because then the decade and the ATH resistance will have been overcome. In my opinion, this signal is still in the far future. I think at the earliest in January resp. February 2017 it will ensue. The space between the lines of the 5th is powerfully chewy resistance area. It will take a lot of effort to get through!

If such a powerful buy signal occurs in January/February 2017 – later would be enough, too, of course – the GUNNER24 will signal officially a new multi-year bull market!

Well, next to come is the likewise possible light-green-dotted-arrow scenario:

Important: Since the 285 were reached earlier than usually, the first up impulse thereby having been steeper than expected yet this uptrend was supposed to last at least 12/13 month candles, now a likely scenario is there that permits the HUI till January/February 2017 at most just the repeated test of the 285. In order to end there and then the whole countertrend with a small lower high or small higher high resp. double top finaly in January/February 2016.

Interesting is also the following observation: The # 8 as well as the # 9 closing price could defend the Decade Support Angle anchored in the chart above. This is actually very, very bullish, an expression of the existing upwards forces! Even though the lower line of the 5th presses and pushes downwards the 2016 uptrend in the current downswing was able now to defend a next higher Decade Support. The decade bulls are really fighting tough now against the decade bears.

At the beginning of today’s analysis, among other things I made clear that quite possibly the # 10-October will/should have to make once more a small lower low than the # 9-September = 3 monthly candles of consolidation/correction.

But what if the # 9-September low was already the final low of the entire consolidation/correction? = 2 monthly candles of consolidation/correction! This possibility is hidden behind the light-green-dotted-arrow outcome! If everything takes a normal course, the coming # 10-October candle will open most exactly at the lower line of the 5th double arc = 230-231 and therewith exactly at the currently most important and strongest resistance!

And therefore, because of the existing ATH & decade resistance, the HUI should have to start declining heftily immediately on Monday, at the latest on Tuesday… to test back the 193-194 someday in October, at the latest in November – in an ideal case!

But, and this is likewise an important signal, a powerful GUNNER24 Buy Signal: As soon as the HUI succeeds in timbering into the chart a clear weekly close above the 230 pts in # 10-October – a weekly close above 235 should be good enough, I suppose!! – the current consolidation/correction will be finished with a 90% of probability the HUI being able to reach the 285 pts and thereby the August 2016 year high till December 2016 and being free to overshoot again till January/February 2017.

Be a part of our exclusive sworn GUNNER24 Trader Community – now... I try to make you rich with the help of current Gold and Silver Miners bull market!