Approaching to a bottleneck

It’s becoming critical for gold and silver. For, traditionally the precious metals won’t be positively supported any more after the beginning of October before both "at least" will be in for a very powerful 4-5 week decline. And since 2013 is a very weak year for both metals – a downtrend year – the June lows will be most likely to be leastways re-tested intensely or maybe even cracked during the expected new sell-wave that is going to start off soon.

Today, I’d like to show you all those important monthly gold resistances for October which gold may harshly turn down from any time. In addition, I’m going to present the trigger marks for pretty riskless short-entries that will be a matter of being minded in October. 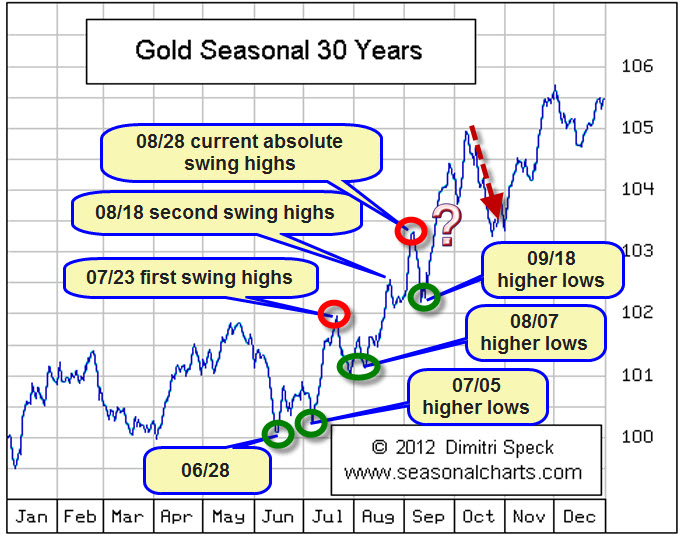 Since the important June lows gold has performed again in accordance with its typical seasonality sketched in the chart above by the blue line. In the seasonal chart – provided by www.seasonalcharts.com; many thanks – I recorded the changing points of the second half-year of 2013 with the current changing data. We ascertained that in the second half-year of 2013 gold has been sticking to its changing patterns submitted by the seasonality of the past 30 years.

Thus, from the June 28th lows until today we can diagnose an unequivocal uptrend on daily base. There are higher lows. Please focus now on the last important lows from September 18.

The seasonality determines that the final rally should go into the traditional autumn high from mid-September to the end of the first or to the 2nd trading week in October. But: Unambiguously, this rally has not arisen or it is not en route yet, respectively. Gold is still trading near the 1291.50$ lows of 09/18. The current gold price is 1336$. The non-appearance of the rally so far is signaling that the market is in a new downtrend again from the 1434$ uptrend high of 08/28/2013: 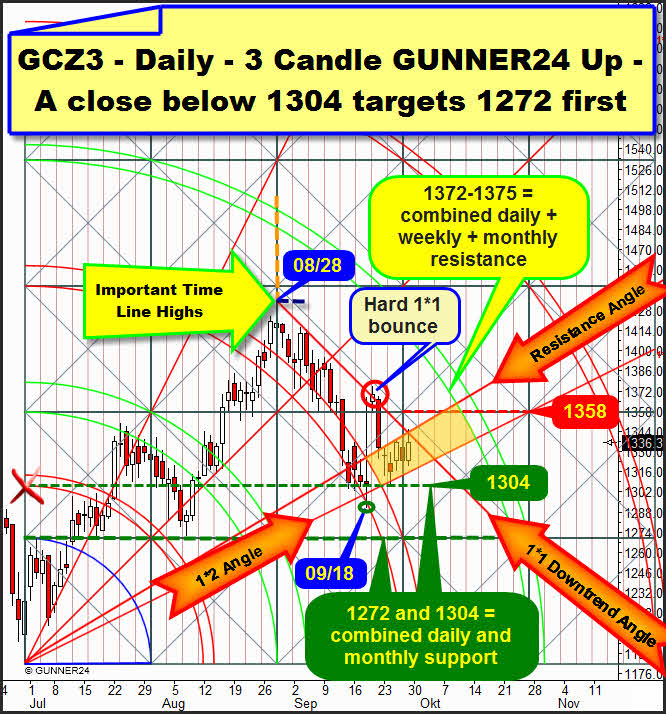 The daily 3 candle up is indicating that the high of 08/28 at 1434$ is extremely significant since it was made exactly on an important time line. In case of lows and highs that fall on important time lines the markets tend to changes in trend. But such a change in trend has not been confirmed. On the contrary, gold has shown a series of higher lows on daily base so far. And that would be the only feature we are allowed to attach an uptrend to! But if the low of September 18 is fallen short, gold will be in a confirmed new downtrend.

After the important low of 09/18 and after the new hefty rebound from the still dominating 1*1 Downtrend Angle that was originated from the significant uptrend high, gold has been trading in a very narrowly defined Gann Angle Corridor for the last 5 days (hatched orange) that is limited above by the Resistance Gann Angle and supported from below by the daily 1*2 Angle.

The daily 1*2 Angle is an extremely important support on closing base! Hitherto it is defended by the bulls achieving that gold has not closed beneath! A daily close below the 1*2 Angle – actually from 10/01 – would make gold have to target the 1272 in October…

But it would take a daily close below 1304 in October 2013 to confirm the 1272 as the first downtarget for October 2013! About this, please pay attention to the monthly 5 Candle GUNNER24 Down Setup right at the bottom!

The daily Gann Angle Corridor dyed orange in the chart above is going upwards. Generally, this corridor is to be classified rather as a bearish pattern since it has developed after an important low. All the same, a breakout upwards is as likely to happen as a breakthrough downwards.

If gold succeeds to close above the Resistance Angle – and thus above the 1*1 Downtrend Angle with its extreme powers of resistance – on 10/01, the market will be able to target the 4th double arc and the 1372-1375 till about 10/07-09 before the October correction should start from there being likely to lead gold down to the combined daily and monthly 1272 October horizontal support, at first.

Traditionally, in actual fact gold is supported through the first and beginning of the second October week. But if gold drops out of the daily Gann Angle Corridor as early as at the beginning of October i.e. on October 01 or 02, being forced to follow the pressure of the 1*1 Downtrend Angle, there would be the signal for the beginning of the next selling wave that will be pretty likely to continue till the end of October 2013.

Before we take care of the currently dominating monthly down setup, let’s first have a brief look at the weekly situation: 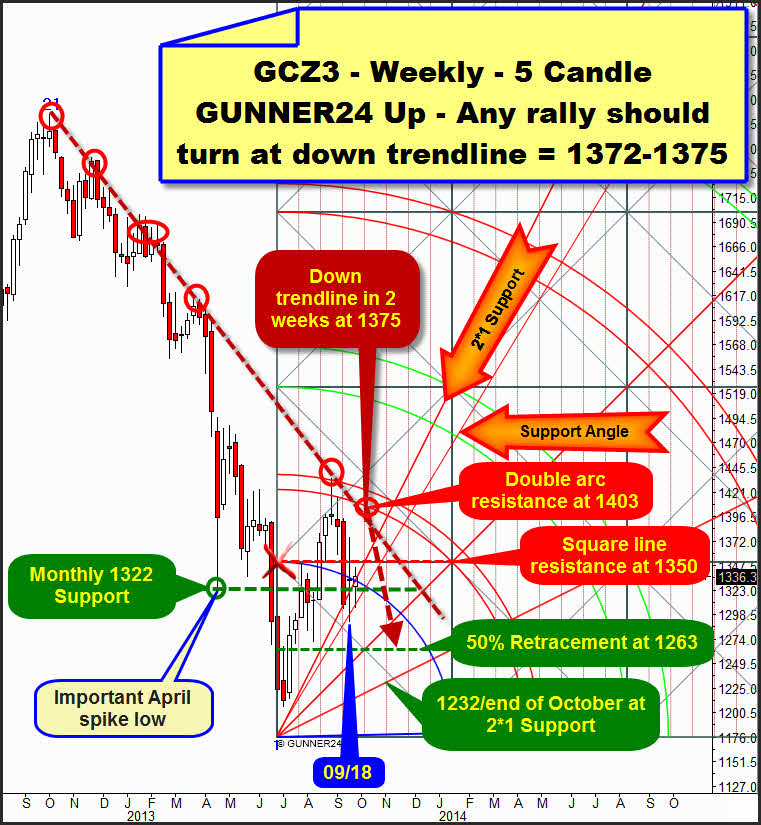 This is in advance and for remembrance: Together with the 1272, the 1322 is the most important September and October support. The next higher monthly resistance above the current 1336 is the 1372. Please read up here why the 1372/1322/1272 has such an enormous importance for the gold price.

On the whole, the 1322 held in September. The recovery from the 1291.50 September lows inclusive of the re-conquest of the 1322 horizontal support combined with the re-conquest of the important weekly 2*1 Gann Angle and the weekly Blue Arc on weekly closing base is brightening up the situation for gold somewhat. Now, the positive close of the last week candle including the possible final overcoming of the mentioned weekly resistances may be the signal for the beginning of the hitherto pending, seasonally conditioned rally until 10/08-09!

Even though the 1322 was defended, so far there is no strong up-energy at all to be sensed in the market whereby a rather feeble rebound is anticipated. Technically, any ongoing rebound during the next fortnight would be able to lead maximally up to the weekly down trendline.

That one will pass at 1375$-1372$ in two weeks. Thus, the 1375-1372 is not only an important weekly and a strong monthly resistance, but also calculable as a possible October high in the daily 3 candle up at the 4th double arc. The 1372 is the strongest Gann up magnet for October as well as the strongest October 2013 resistance which the market – in case it reaches there anyhow - should heftily turn from in order to target in October at first the 1272, then the 1263 and in the end the 1232. If October closes below the 1232 gold will be likely to keep on falling till end of 2013 bringing in some new year-lows at any rate. 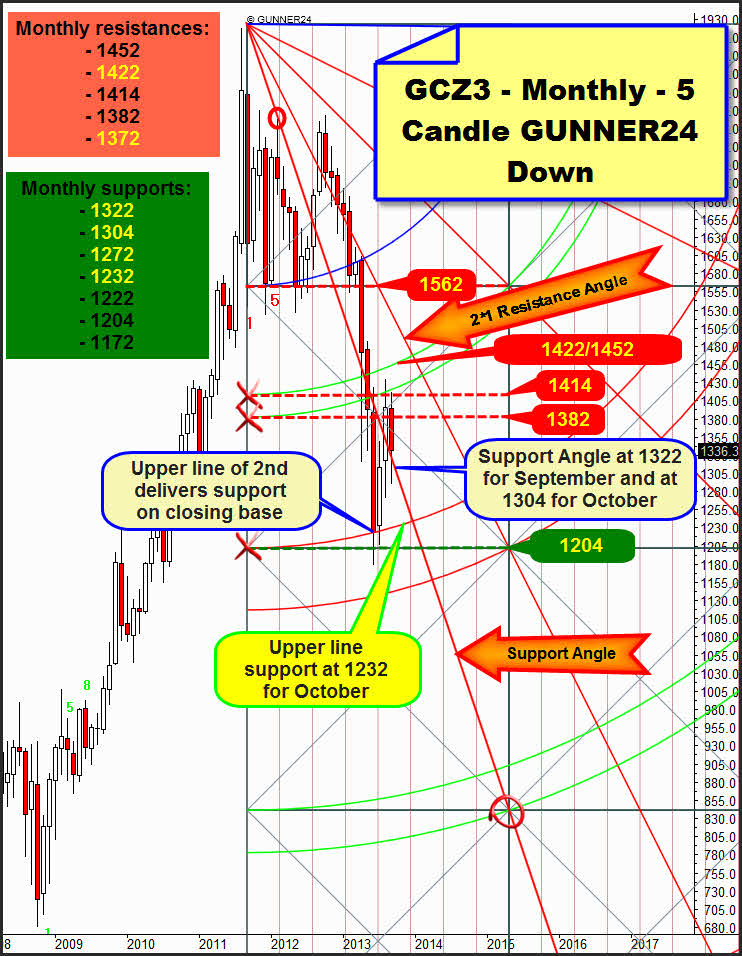 Now the performance since June 2013 is confirming that the current gold correction on monthly base orients itself not only by the monthly 4 candle down setup, but also by the 5 candle down setup above that is published for the first time now. Clearly is to be made out that the 2nd double arc with its upper line provided unequivocal (because absolutely precise) support on closing base, in June 2013. The performance of the August highs at the first double arc resistance and the September candle at the 1414 horizontal resistance indicates us furthermore that also in the future gold is going to keep on orienting itself by the supports and resistances put out by this monthly 5 candle down.

That doesn’t really make the whole story less complicated as far as the valid and important resistances and supports in the monthly time frame are concerned. Trading on daily and on intraday base becomes the more difficult and the less foreseeable the more monthly marks are suddenly added a market orients itself by.

Besides the well-known 1422, 1372, 1322, 1272, 1222, 1172, mentioning just the currently most important ones out of the furthermore valid and parallel considered monthly 4 candle down (derivation here) now the 1452 (upper line of the first) and again the 1422 (lower line of the first) resistance are joining. Please mind that the 1422 is now identifiable in two different monthly down setups = super strong double resistance magnet.

The 1382 is roughly corresponding with the current 1375 weekly resistance = likewise a strong resistance area.

Now to the supports: From the monthly 4 candle down, we are also familiar with the 1322 as a horizontal support. In addition, the 1322 is situated exactly on the monthly Support Angle. That means the 1322 is likewise an important and strong monthly support, a combined one.

The important Support Angle is at 1304 in October having been re-tested in September already. Please have another look up to the daily 3 candle up setup. That’s where the horizontal support on closing base passes at 1304. If this support is fallen below on daily closing base at two successive days, a mighty signal will be released that will put out the new test of the upper line of the 2nd in the monthly 5 candle down at 1232 as the minimum target.

So to speak as a leaflet, I resumed for you the most important monthly marks, top left in the legend. The combined, hence important supports and resistances for October are dyed yellow.

Here are briefly the breakthrough sell-signals for a due October correction that can start at the latest on 10/08-09: in case of a daily close below 1322 the 1304 will be targeted. In case of two successive daily closings below 1304 at first the 1272 will follow, presumably being broken thereafter and going quickly down to 1232. Then, between 1232 and 1222, the market may start a new upleg.

The October resistance the correction will be most likely to start from is the 1372-1375. Still allowed will be the 1382. Much more is not possible. But since on Tuesday, 10/01 the precious-metal phase of traditional weakness begins, gold may dive down immediately then.

At 1350, the weekly square-line resistance or perhaps at the important daily 1358 resistance gold may immerse finally at any time… everything is possible!! The rally high up to 1372-1375 may be cancelled!!

Lastly here comes a little outlook to the year 2014. The way the market is performing permits the following ascertainment: In the monthly 5 candle down the first double arc is a visible and hard, very hard, resistance.

Gold won’t be safely long before the first double arc resistance on monthly base will be overcome clearly. That will take a monthly close above 1460.

But that won’t be likely to happen before next year. The rebound from June to August 2013 lasted for 2 or 3 candles, depending on the way of counting. At the moment that count points to a countertrend move since June 2013 lows, and that view may easily lead gold back to the 2nd double arc support again in the traditionally weak weeks being able to make it even break finally. Inevitably the consequence would be some new year-lows – also for the year 2014. Prices around 1000$ in 2014 would be very likely in that case.

But new correction lows on monthly base are not to be expected compellingly. The defense comportment at the 2nd double arc is suggesting that the June 2013 lows are very important perhaps really meaning the final low of the entire correction. Currently I guess that gold is going to perform rather sideways far into the year 2014, being willing to bounce to and fro, somehow between the resistance of the first double arc and the support of the 2nd double arc.