Whereas the leading broader US equity indexes are mostly at their respective all-time highs after a strong summer, the DAX is still a 2.4% away from its all-time high (ATH) achieved this year in June at 12897pts.

The negative DAX performance (and the most other leading EU stock market indexes) compared to the US markets is clearly due to the normal seasonal development, in which the index actually ALWAYS underperforms: 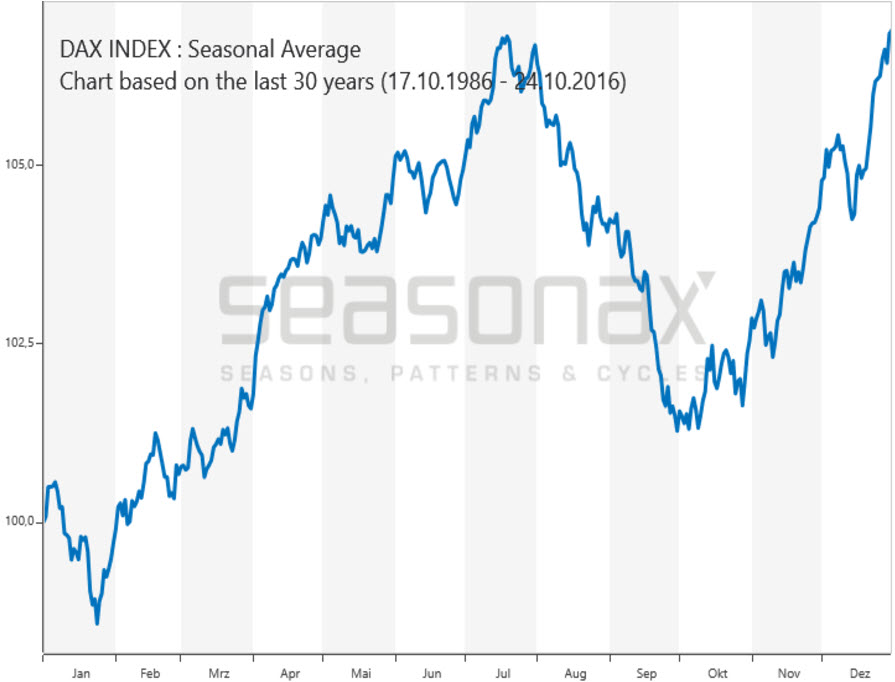 DAX/FDAX has a longterm history delivering an important high at the begining of summer and declining/correcting deeply afterwards. In the current year the summer correction cycle was a very mild one according time and price. This is damn bullish outcome, so soon new index highs will be on agenda. In fact, we have to go back to 2013 where we could record a similar bullish summer.

Then 2013 printed a flawless bullish uptrend year, cementing its year low near open and the highs near close of 2013. Well, this behaviour will also be the case for actual 2017.

Like always, for my DAX analysis I refer to the DAX Future contract = FDAX: 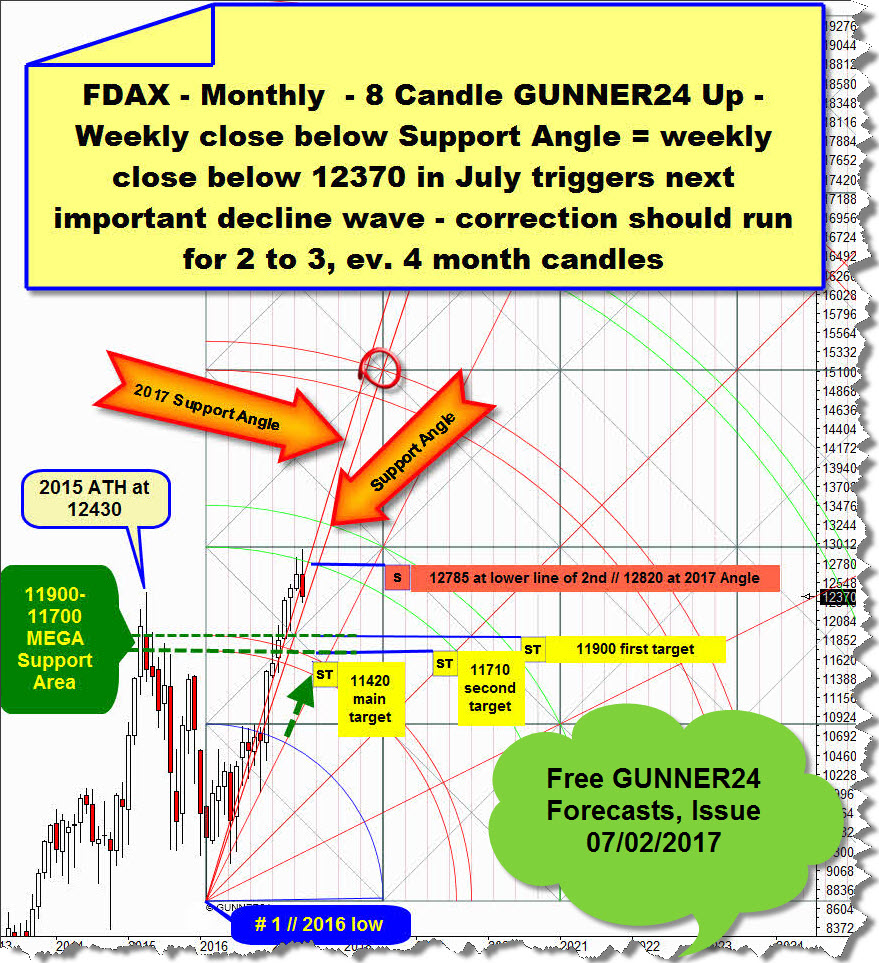 The circumstance that at the attained June top (12949pts) the summer correction has begun was described and analyzed in-depth in the free GUNNER24 Forecasts, 07/02/2017 "DAX: First important sell signal for 13 months".

Quite normal correction targets according price were:

Most preferred low area for the monthly downer was the MAGA Support 11900 to 11700. The probability of the 11420pts main downtarget to be worked off through September 2017 was just around 25%.

According the time factor the correction should last either 2 or 3, max. 4 month candles.

==> FDAX opted to correct for 3 month candles and turning finally upwards from 11863 at final August low. This almost all the strongest corrective behavior leaves the bears completely in the rain... 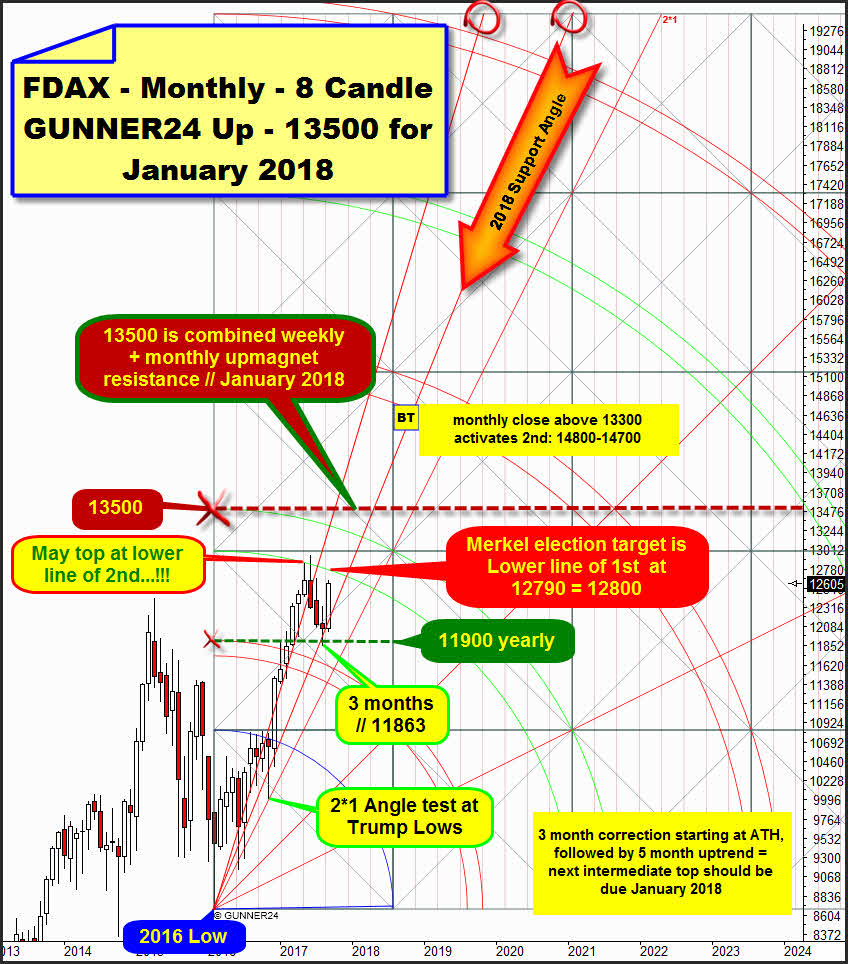 Above, you see the actual FDAX chart in the monthly scale including the still most dominating 8 Candle up setup that is being applied at the final low of 2016.

The June candle made new alltime-high (ATH) inspired by natural bull market resistance arc, delivered a monthly reversal candle at its close and thus was signal for the "regular" summer correction. At the end of its 3-month downer, the FDAX at final August low just tested back the 11900 GUNNER24 Horizontal Support (dark-green dotted) which can be derived from intersection point of upper line of 1st double arc with the starting point of the up setup and anchorable 2018 Support Angle.

Simultaneously the lower line of 2nd is now again strong attracting yearly upmagnet for the FDAX, and I have no single doubt that the joy of today`s re-election of the German Chancellor Merkel pushes FDAX to the 12790 yearly resistance trail = "round" 12800 backtest until end of September, resp. early-October! Means:

Furthermore, there is NOT a SINGLE REASON to prevent a bullish September reversal candle and this is A) a next strong buy signal in the monthly time frame, simultaneously signaling B) the "official" end of the summer correction, C) the resumption of the bull market, thus D) activating higher highs in intermediate base.

Because the summer correction was clearly oriented to the Fib number 3 (June-August) the new underway bull leg usually will be oriented on the next higher Fib number, the 5!, with the new bull leg beginning at received September lows:

==> FDAX is expected to uptrend further into a January 2018-top of some degree, which usually should be the next important intermediate top of the bull.

I expect the FDAX to grind higher through the overall 2nd double arc resistance environment to test the dark-red dotted 13500 GUNNER24 Horizontal in course of January 2018! For the coming months until January 2018 the 2018 Support Angel further on should act as strongest rising monthly support! Investors/traders should buy any dip into 2018 Support Angle!

The following weekly up setup starts measuring upwards at received Trump Lows which was 100% accurate, bullish backtest of 2*1 Support Angle in the monthly above: 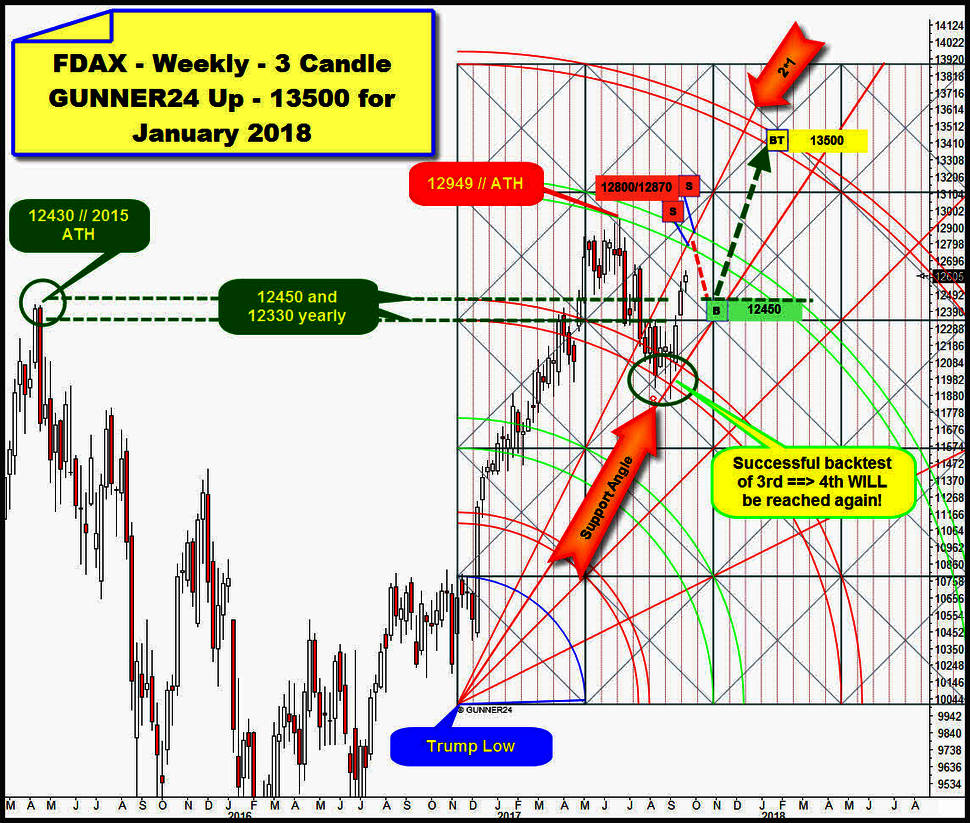 This first test of lower line of 4th resistance from below marked the current 2017 high which is also ATH and triggered the summer correction (11 week candles).

Summer correction was deep backtest of former 2015 alltime-highs and quite successfull backtest of in course of 2017 finally upwards broken 3rd double arc. The summer correction ended with a dip below the 3rd double arc and highlighted Support Angle set up a bear trap, afterwards FDAX started a new monthly bull market leg and a weekly upcycle. Because the 3rd support was defended and triggered a stronger weekly uptrend, the lower line of 4th double arc backtest is now short-term uptarget and likely will be tested for the second time within next 10 trading days.

For the upcoming week candle the lower line of 4th upmagnet, at same time strongest possible future resistance above, is at the "round" 12800, so in full harmony to the next higher monthly resistance arc which is at 12790 for September. As written above, I expect some bullish follow through up to 12800 because of Merkel re-elect and perhaps even the upper line of 4th (12870pts) together with 2*1 Angle resistance will be tested at the end of current underway weekly upcycle which is at No. 5 for next week candle!

Please don`t expect the overall 4th double arc resistance area to be overcome at current underway second test. 4th cemented an alltime-high and usually is a strong future falling threshold!! Such confirmed strong resistance magnets are rarely overcome finally at second tests! Instead the FDAX should begin a 3 to 5 week lasting next correction leg at 4th resistance magnet and somewhere between 12800-12870, just for testing back one more time the former 2015 ATH environment!

==> I can imagine that close to the end of October, the 12450-12330 horizontal support area will be tested and the FDAX for the VERY LAST TIME is searching to confirm the former 2015 ATH area as most future support in the yearly time frame. Once that final backtest of the former 2015 ATH area at 12450-12330 is done ... of course successfully ... the bull market should resume strongly at round about end of October, afterwards pushing hard through the 4th first and testing second the next higher 5th double arc uptarget at the 13500pts combined weekly and monthly upmagnet resistance in course of January 2018!