The leaders keep on rocking

After a remarkably turbulent trading week shaped by volatile, hefty up and down, due to the FED decisions and option expiration, it is worthwhile having an intense look at some index long-term charts today.

In the final analysis, inside we recognize what remains from last week. We see the effect without the confusing dust whirled up by the gaps and rallies full of emotions and the strong selling on Friday.

To begin with a brief conclusion: The leaders of the stock-bulls are standing in front of new powerful buy signals on monthly base that should/may bring another aggravation of the uptrend. Or let us say it in other words: "Rock’n Roll!!"

As you may know from previous issues, I take the stance that the NASDAQ-100 is so to speak the flywheel for many other stock markets. It is the drive wheel other markets are oriented to. Whenever the NASDAQ-100 gives signals or wants to give them, the other markets follow or anticipate those signals. However, what many readers may not know yet is the fact that the NASDAQ-100 uses to be fructified and affected by the German DAX, in its swing performance as well as in the medium and long term. As it were, between both there’s a "secret love" between both with all its consequences. Sometimes they fight together rushing down then in a hefty mutual "Pogo". Unless, they intimately embrace each other prancing nimble-footed and sweeping up together. Though, almost every time somehow they influence the other important western stock markets with their signals.

For exactly 3 weeks, the two have let it rip synchronized again. Jointly they are standing before a new monthly GUNNER24 Buy Signal that is supposed to boost newly most of the other stock markets as well. Till the year-end 2013 all the lights are green! 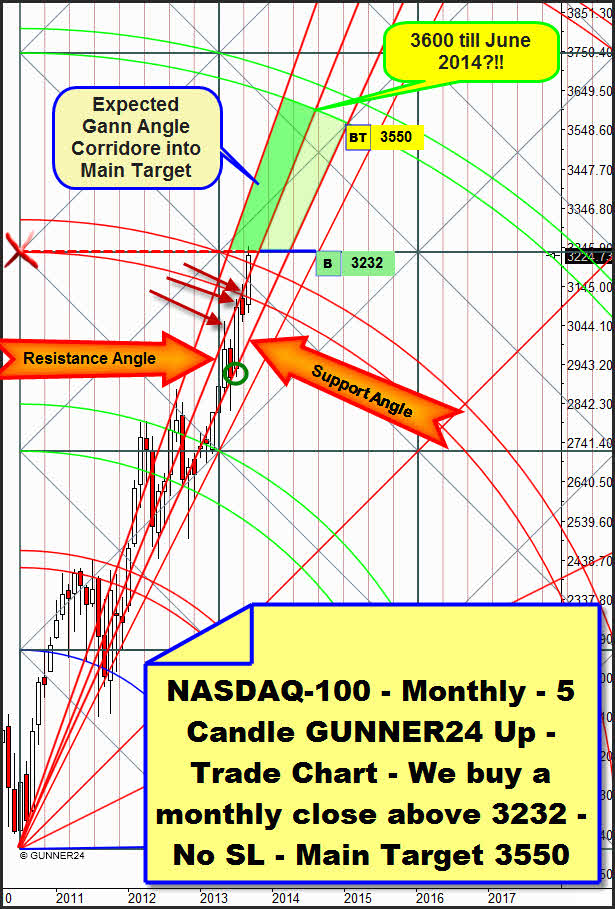 It was on 08/04 when we last considered the NASDAQ-100 month chart with its 5 Candle GUNNER Up Setup. In the analysis then I already prepared you for buying the index in case of a significant break of the 3rd double arc. Now the actual month candle is very likely to make the monthly close above 3232.

For as many as 11 months, the index has been showing a crystal-clear and trouble-free uptrend that started at the support of the 2nd double arc. The seasonal weakness normally expected from May/June to September/October was completely rained-off this year. Technically the natural resistance of the 3rd together with the seasonality should have led to some kind of correction. Since nothing like that happened – because the index consolidated at the highs brutally strong being furthermore September supposed to break the 3rd upwards and in addition the dominating monthly Resistance Gann Angle – an intensification of the trend is likely to occur during the coming months. Overcoming the 3rd double arc and the Resistance Gann Angle in one go (i.e. within one candle) is expected to arouse enormous up-forces and new energies again = double buy candle!!

If September closes above 3232 it will generate a new powerful buy signal on monthly base. In that case, the index would be likely to want to change into the steeper Gann Angle corridor (dyed darker green in the chart above) reaching the main target of this trend at 3600 then, until the late spring 2014.

Now to the DAX, the one of the leading dancers that is a little stiff in the hips, "corpulent and cumbersome". Even this partner is supposed to finish September with a new buy signal, a powerful one!

Since compared with the NASDAQ-100 the DAX is always a little clumsier in terms of signal setting, on the one hand, the lasting, new signals appear less frequently but on the other hand, it is a matter of a very sustainable buy signal. A heavyweight begins to rock. A lot of time is going to pass until this elephant will be fatigue from dancing, i.e. until the new trend will exhaust.

It was in late May 2013 that we last analyzed – rather unerringly – that the market would approach a several month sideways move/consolidation or a little correction finishing with a close above the important monthly 4th double arc resistance:

The current month of September is going to produce this new buy signal. The FDAX is likely to close very relaxed above the 8470 buy trigger: 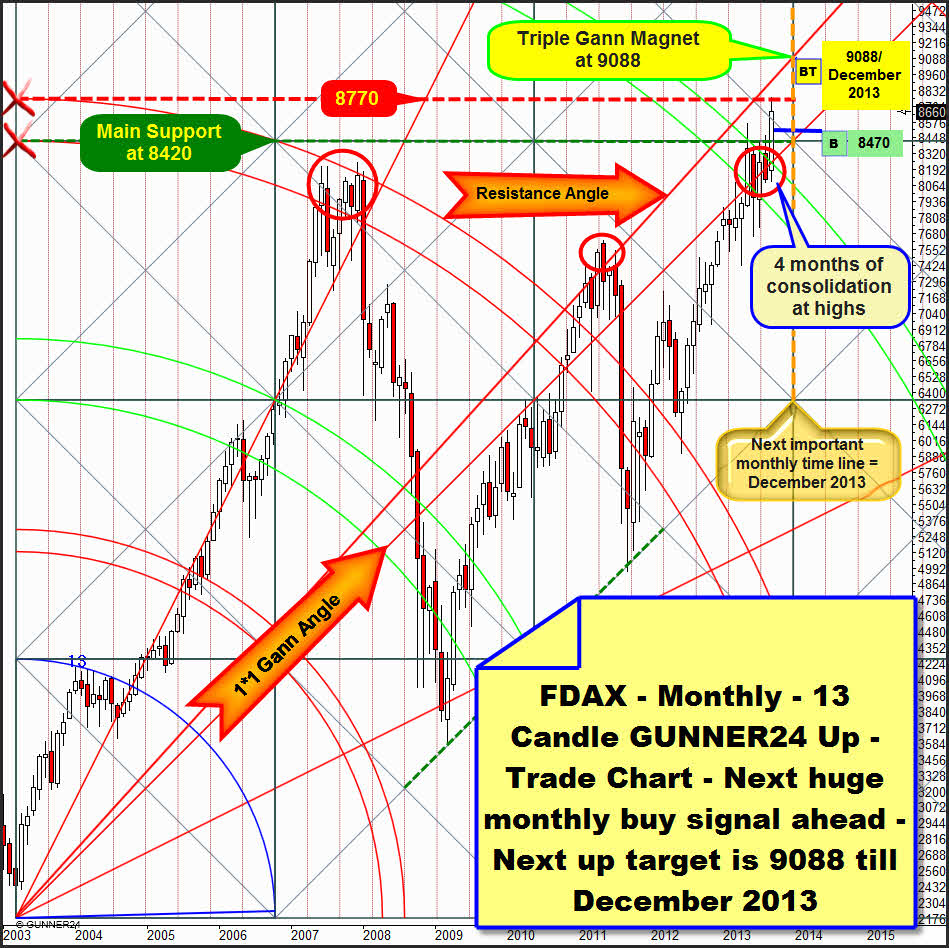 The September candle shows a breakout. As expected, the 4th double arc is presenting few resistance. The FDAX has been consolidating at the highs since May 2013. On monthly base, the 1*1 Gann Angle made the market stay on course during the last consolidation, by and large. The possible 7500 correction target was missed by far. The low of the correction/consolidation was produced in June at 7660.

The 4th double arc is a green resistance double arc. So is the 2nd double arc. In the stock markets, the green double arcs are rather equipped with pretty weak resistance forces in the up setup. The 4th seems to be surmountable almost as easily as the 2nd was at that time. A September close above 8470 is confirming the final break of the 4th. Thus, the 5th double arc will be activated as the next important up target = main target being reached in trend direction with a 75% of probability.

Interesting is the 9088 as well. Combined with another GUNNER24 Up Setup (not depicted in the chart) and the Resistance Gann Angle apparent in the chart above and the next important time line, at 9088 there is a strong Triple Gann Magnet putting out December 2013 as the temporal target, being the next possible changing point.

Last Thursday the FDAX reached an important monthly GUNNER24 Horizontal Resistance at 8773 being thoroughly likely to fall down to the strong 8470-8420 support area. That would not be an unusual reaction to the Bundestag (German parliament) election. Sell the news!

After these elections, nearly almost the DAX uses to have hiccup for 1-2 weeks in order to digest the respective chancellor. Actually, after the German chancellor election another rally never comes up, but nor do heavy crashes. Analyzing the reaction of the market to all the past Bundestag elections, we can only realize one regularity: The trend that ruled before the elections has always prevailed after the Bundestag election as well.

Otherwise, for long is priced in that concerning the German chancellor there won’t be any change. So far, the September performance has been signaling the positive anticipation of the markets to the re-election of Mrs. Merkel!

Moreover, this keeps being true: "If politics had changed anything positively it would be prohibited for a long time!" 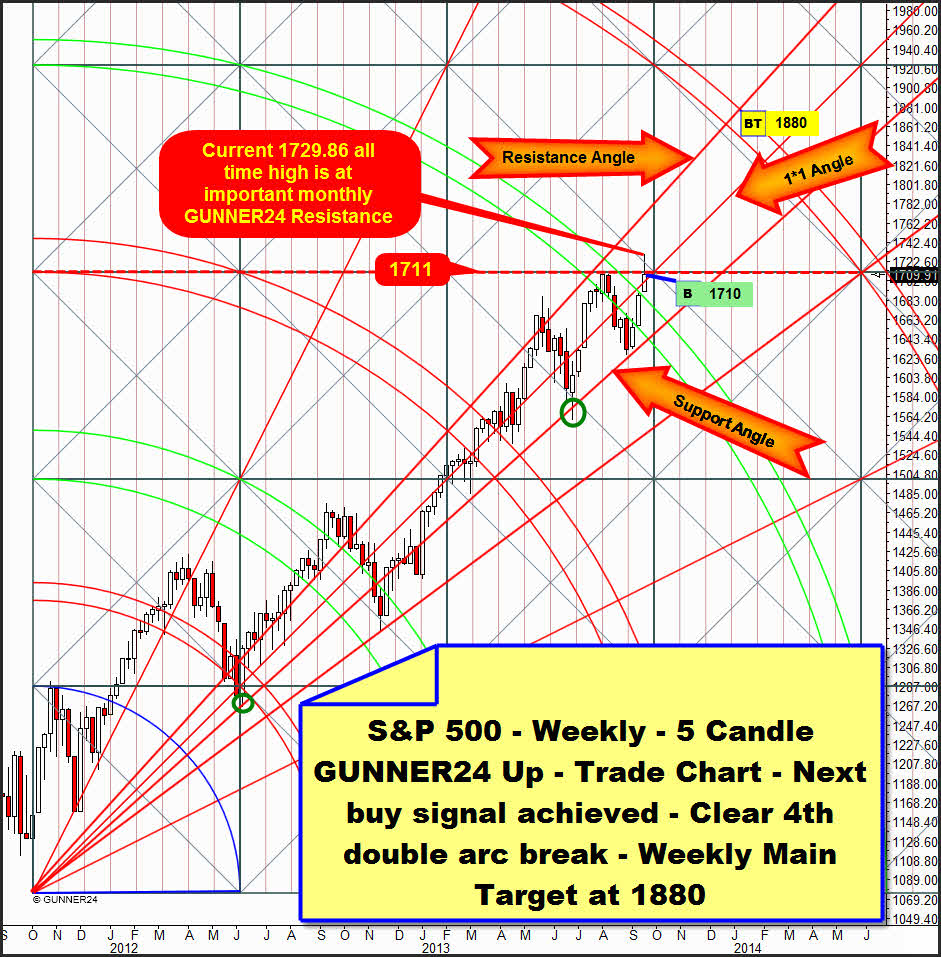 Thus – as analyzed and announced last Sunday – also in the weekly time frame, towards the weekly close we went long again with target 1880. Time target for the 1880 is the middle of January of 2014.

Optically, the long-term resistance of the 4th is plainly overcome now. The probability for reaching the next higher double arc in trend-direction is at more than a 75%, corresponding to the GUNNER24 Investigations. The weekly close above the important 1*1 Gann Angles is now up to guarantee further push-ups.

Correspondingly, the 1711 – an obviously strong GUNNER24 Horizontal Resistance – is likely to fall soon on weekly closing base. This should be the signal for the S&P 500 to tighten its uptrend even more. Likewise, a daily close above the 1730 would lead to a new rally thrust up to 1763.