Neither fish nor fowl

First bid is to keep the feet still awaiting new clear signals till the actual sideways moves and divergences dissolve into one or the other direction. This is – right at the beginning of this issue – my conclusion for the coming trading days already.

In the weekly and monthly time frames the US stock markets are showing a super strong uptrend being supposed to finish 2013 near the year-high. It’s a trend year in the bull market. But at the moment they are situated in the weakest phase of the year, a several week correction, anticipated by us this way.

Thus, by a majority they are currently following the "normal seasonal" yearly pattern in a nearly ideal way. Some different seasonality cycles are still signaling weakness or suggesting falling prices at least through the end of September. Be it the election cycle in post-election years or the cycle of the post-election with continuation in office or the simple fact that September is always the proven weakest stock month of the whole year anyway.

Technically some short-engagements should keep on being obligatory till the end of September, or they should be sought for… But it’s a pity – for the shorts – there are many facts that frustrate straight shorts. On the one hand we are recognizing considerable divergences as to the stock markets regarding their correction patterns and possible further falling depth within the actual correction.

In the final analysis the NASDAQ-100 and the Nasdaq Composite haven’t corrected at all since the year-highs. They have been pausing in their respective year-highs since the beginning of August consolidating brutally strong at the highs thus preparing their soon upwards break chart-technically. Both tech-markets are clearly defying the negative seasonality aspects = positive divergence!! In this case going short really would have been and would be a stupid idea.

The Dow Jones is the weakest of the three US stock markets we analyze. Compared with the S&P 500 it is showing a clear negative divergence, so some shorts may be successful through the end of September. Yeah, and the S&P 500 is almost appearing as if its correction might have come to an end. The most profitable yield chances with short-positions within the current correction are likely to be over… We caught the nearly perfect short-trade: 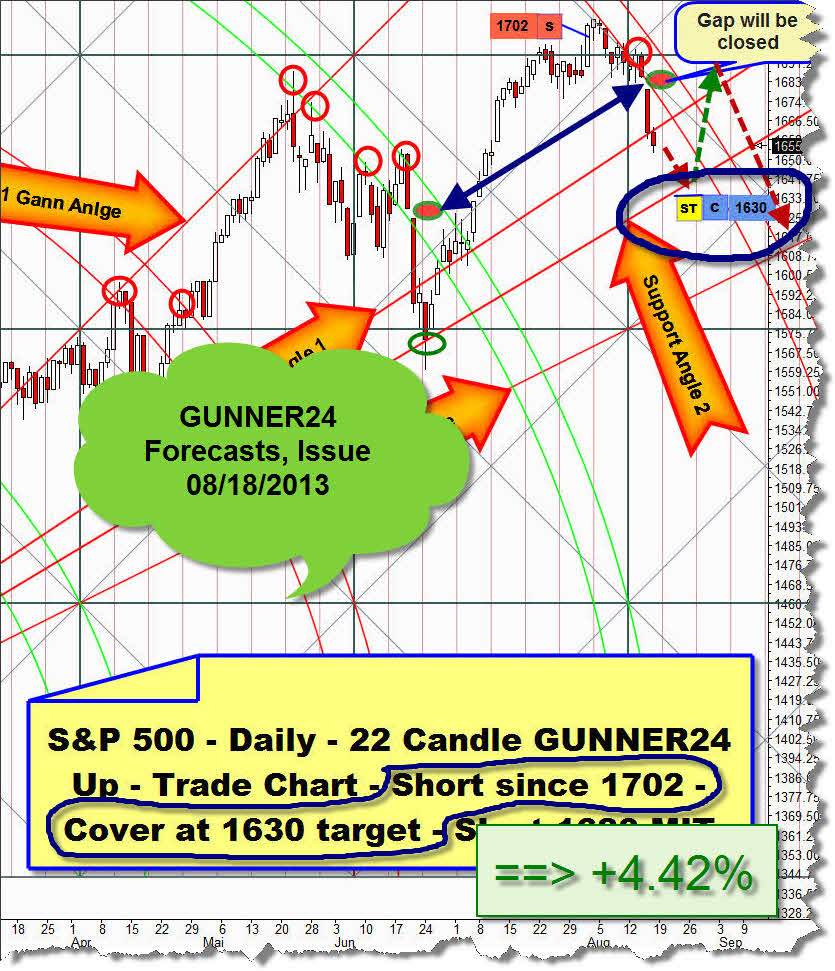 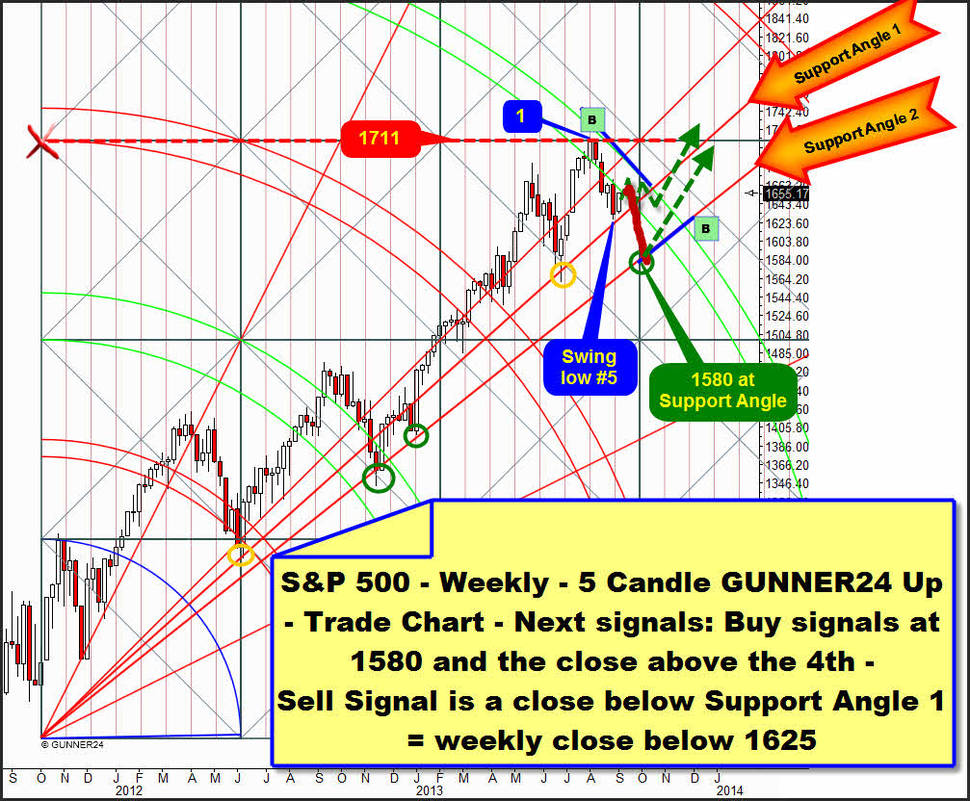 In the latest weekly up setup of the S&P 500 we make out that the correction lows are situated near the Support Angle 1. On the one hand it’s an indication of inner strength that the market didn’t even have to touch the Support Angle 1 to turn up again. On the other hand this angle should still have to be headed for. It’s simply the strongest magnet beneath the actual level. So, technically the price would have to test the current lows again – till the end of September.

These lows might resist because there will be the possibility of a higher low or a double low or a very small lower low on weekly base! It’s the candle count of the current correction that leads me to this outcome. Cause there is a good chance that the week before last being the altogether 5th week of the correction the final correction low was reached. 5 is a Fibonacci number. As we all know the markets always tend to turn in case of Fibonacci numbers.

So, if the market succeeds to defend at large the Support Angle 1 things will be expected to work about the way that is shown in the green dotted course. After overcoming (the first close above the 4th double arc) the 4th double arc it will go up until the year end and the new year-high.

Let’s go now to the bold red course. A weekly close below 1625 during the next 2 trading weeks will activate the next lower important Gann Angle as a target: the Support Angle 2. In that case the market would "classically" follow the natural resistance of the 4th double arc downwards till reaching the possible Main Target of this correction at about 1580 in the first week of October!

The risk taker traders may dare a short-try at 1667-1670 next week as it is thoroughly possible that the market wants to form an ABC correction of the year-highs. In the process wave A stretched from 1709 to 1627 = 82 points. Half of that are 41 points. 1627 plus 41 makes 1668, and 1668 less 82 makes 1586. That’s very close to the Gann Main Target of this correction calculated above. Please monitor this trade extreme precaution and tight SL. I personally wouldn’t like to be positioned on the wrong side in case of a possible missile attack to Syria…

Whereas the stock markets have by and large been bracing themselves against the negative seasonality and the technically expected correction, gold and silver are performing just in accordance with THEIR expected seasonality. They are looking pretty well yet… still they are consolidating underneath their swing highs of the week before last.

But there are unambiguous warning signs that both metals will soon rolling over being able/willing to continue the downtrend on weekly and monthly base or they might test the summer lows from October again.

A hefty warning is sent us by palladium, the previous leader of the precious-metal market in 2013. Even though it is supported by the seasonality till year end, during the last days it dived brutally down after having produced the fourth lower high of the year 2013 on 08/15. For the entire year being situated at 696.70$/oz. today it is showing a minus of 7$/oz. again. Is it a harbinger of gold and silver? 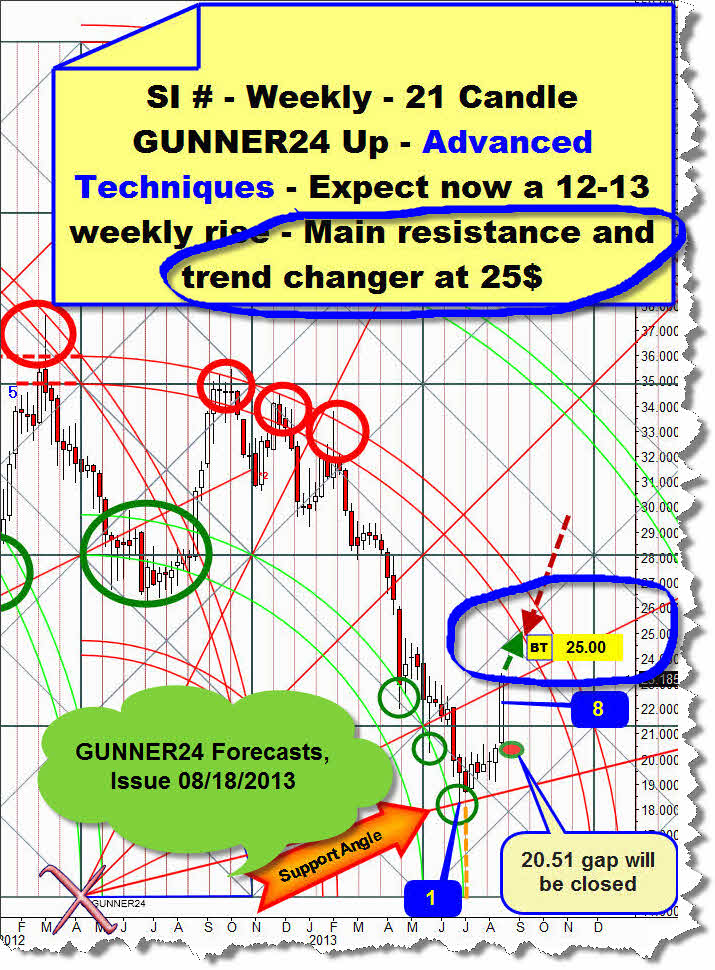 The 25 were reached as forecast. The swing high of this daily uptrend was brought in at 25.12 on 08/28. The 25.12 is not only situated at the strong natural resistance of the lower line of the 3rd double arc in our important precious-metal GUNNER24 Setup that is currently pointing the way.

No, in addition the 25$ mark is also a natural, the very, very important "MILLENIUM-RESISTANCE" for silver. From the 0-price to the all-time high at 49.82$ the 25$ are close to the 50% Fibonacci Retracement: 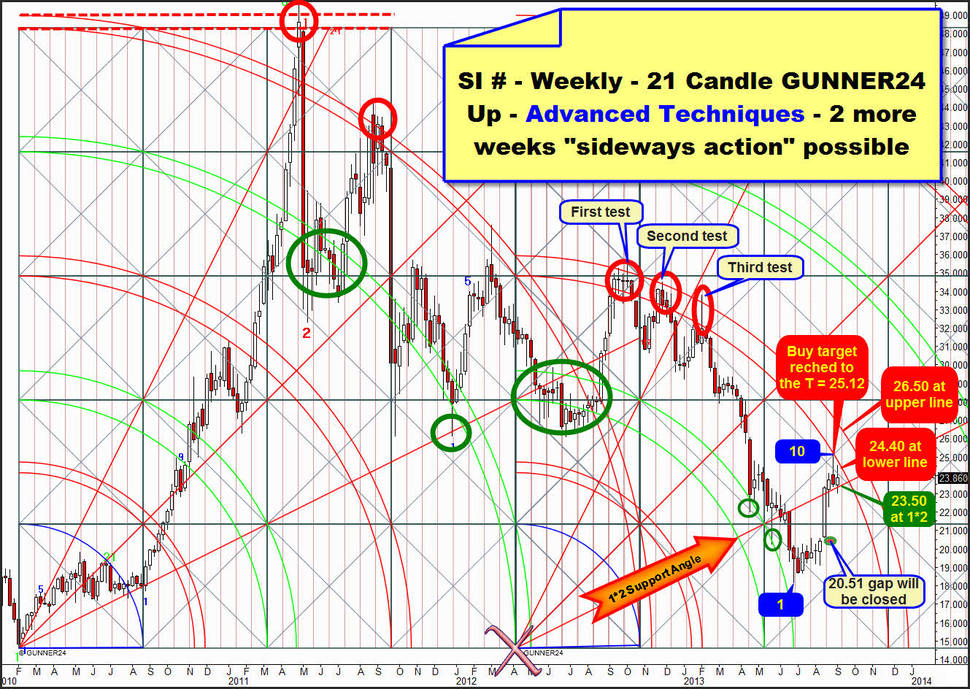 If silver wants to mark its swing high classically in the 13th week it might do so at the 26$-26.20$ surroundings (upper line of the 3rd). So we have to be careful with medium and long-term longs.

The possible new change in trend may lead silver to be obliged to close the gap at 20.51 during the next weekly downswing! Still there’s no signal for closing this gap. The reason is that due to the seasonality silver is still going to be supported till the end of September before the "usual" 8 week October-November decline should/could follow. By virtue of the season prospects of the situation of the 3rd double arc and the performance of the metal at the extremely strong 1*2 Support Angle silver seems to be able to penetrate within the lines of the 3rd next week.

But for that the lower line of the 3rd would have to be exceeded at 24.40 first. A daily close above 24.40 next week would make silver produce a new – short term - buy signal on daily basis. In that case it would newly target the 25 pretty soon! A daily close above 25 as well as new swing highs during the next 6 trading days will activate the 26-26.20 region till September 23.

Like silver, gold has also reached an important weekly GUNNER24 Resistance at the swing highs. Exactly at the same time...: 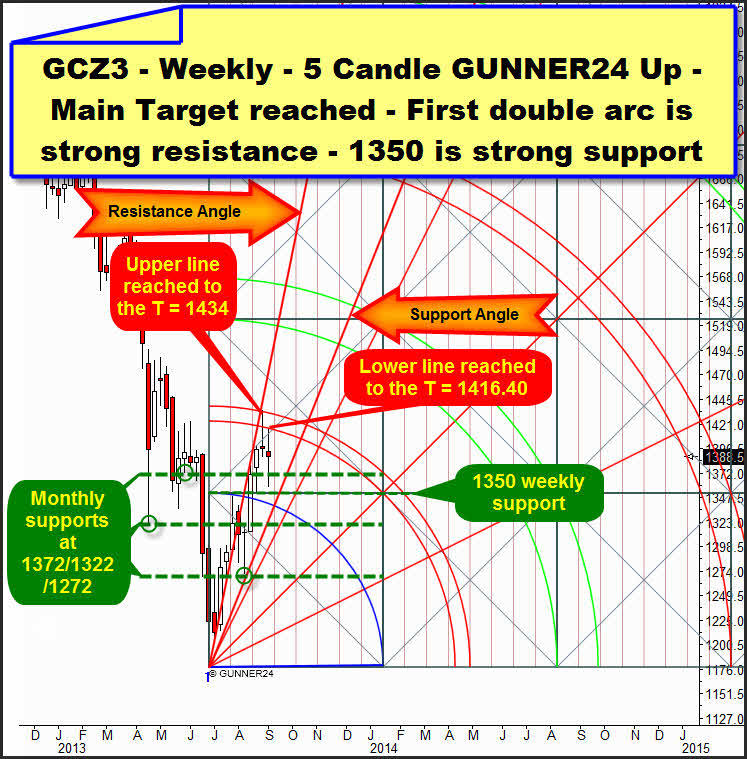 The upper line of the first double arc in the current weekly 5 candle up is lying exactly at 1434. From there gold reacted consolidating currently below the first double arc which is exerting an important resistance function. We recognize this function because of the fact that the last weekly high was made exactly at the lower line of the first = 1416.40. Both last weekly candles are showing long upper wicks. Spike candles mean strong resistance. It’s no coincidence that the spike highs are situated at the important Gann Resistances! Unlike silver gold didn’t manage to finish last week in a plus.

In my opinion gold is showing clear signs of a coming sideways move for the next 2-3 weeks! Above it is limited by the first double arc. From below it is backed by the strong 1350 horizontal support. Since currently the first double arc resistance has a strong influence this 1350 support is technically supposed to be reached. Actually that should happen during the next 5 days. In case the 1350 breaks on daily base, the strong 1322 monthly support will be likely to be reached.

But if gold succeeds to produce a weekly close above 1436 during the coming three weeks the 2nd double arc in trend direction at about 1500$ will be the next weekly up target, the temporal target till mid-October 2013. Such a weekly close is what we’ll buy!

Would you, too, like to profit from this next possible monster-wave in the precious metals on a large scale? Do you require a service that monitors, controls, analyzes and signals for you all the important moves in gold and silver? If so, go ahead and order just right now the GUNNER24 Gold Trader!

That’s where we oversee the optimal entries and exits for you. Especially in the difficult market situations where many factors have to be considered the Gold Trader is backed by the additional GUNNER24 Signals based on the combined 1, 4 and 8 hour setups to catch the optimum entries and exits.