The cards are being reshuffled

Since the last free GUNNER24 Gold Analysis by the end of July, in terms of price has not happened much with the metal. For the whole summer, it was stagnating, bobbing up and down so to speak and standing now -1.1% lower – last Friday compared with the end of July. July close was 1283$, Friday close is 1269$.

In respect of the signals and from the sentimental point of view, this summer might not have brought an uglier course for the gold bulls. All the GUNNER24 Buy signals on daily and weekly base generated till the beginning of July, confirmed and actually strong – minimum uptarget 1402 / main target 1430, the derivation and deduction of those signals can be taken from the GUNNER24 Forecasts of 07/27/2014 – have been denied by the lukewarm price performance of the last 8 weeks (summer doldrums). I.e. all the beautiful daily and weekly buying signals were not confirmed by the monthly time frame!

In spite of the geopolitical turbulences of the last weeks, gold has not be able to rise in US$ terms. The investors rather flew into the US stocks and in an almost obtrusively conspicuous way into the US$. Gold seems to have lost its safe-haven function willing now to lead the deflation trump.

In summer, the Chinese and Indian gold imports collapsed strikingly giving additional salient indications for the worldwide recession doubtless breaking out "visibly" in 2015. If now even still the demand from the East declines after the Western gold demand has shown glaring weakness for more than 2 years in contempt of the low-interest context of the leading western industry nations, we don’t have any good prognostic symptoms for sustainably rising gold prices in US$ terms: 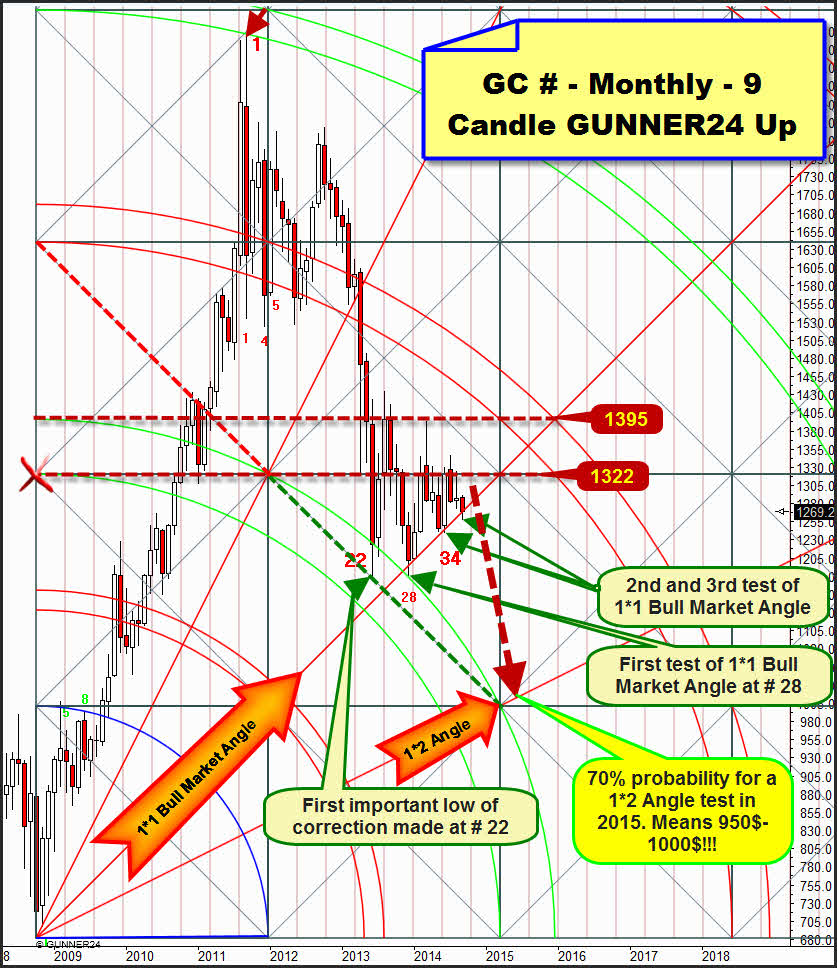 A rising US$ is nearly always poison for a rising gold price in US$ terms. It is, above all, in regard of the fact that the current US$ rally after several years of bottoming is likely to be just at the "beginning of the rally move" not topping out before some day in 2015 at the earliest.

Whereas August all the same closed in small grren, in spite of the outstanding US$ force and collapsing China and India imports, the just concluded first September trading week makes the picture of gold considerably cloudy yet.

From the 1322 that newly proved to be the most important resistance for the rest of 2014, in August it went down again. Now, the first trading week in September, gold closed at 1269.20 thus attaining exactly the 1*1 Bull Market Angle that emanates from the bear-market low of the year 2008. Thereby, it’s currently the third time the bull market is testing this important angle. The first test occurred in the 28th month of the whole correction. The second test of this immensely important bull/bear trigger took place in the month # 34 of the entire correction = June 2014.

The Gann Angles are always extremely important resistances and supports after all. They are treated like trend lines. Here you can apply all the methods applicable for the trend lines. The price should reach the next Gann Angle towards the trend, if one angle is broken finally. Whenever the price reaches a Gann Angle time and price are in an important mathematical correlation since there the emotions of the traders bundle up into one price at a certain time. In cases like that, always a turning trend shows. But if the turn does not happen and the angle is broken finally there will be a strong tendency of a trend continuation.

In this context, the rule of 3 and the rule of 4 generally have a great importance. After a break in the 3rd or 4th attempt mostly some big moves will follow. And since September is testing the 1*1 Bull angle for the third time now, the price may newly rebound upwards aiming at the 1322 again.

Or, it’s going to crack down completely. Now, gold is really standing – yet again – in front of an important decision! Next week will be crucial. Either gold succeeds once more in escaping bouncing next week back above the important 1272 monthly resistance (see another monthly gold chart below) or – if it closes significantly underneath the 1269 next week – there will be the big threat of a huge monster sell signal finally activating the 1*2 Angle and the 950$-1000$ region for 2015.

As matters stand today, I work on the assumption that the 1*1 Bull Market Angle will hold in September – once again, for the last time! – and thereby also in the 3rd test. For I’ve got the impression that the whole sell-off of last week is well orchestrated, really absolutely nothing being concerned with the easing of tension in the Ukraine crisis.

Just in time and a few minutes after the Tuesday opening, first day after Labor Day – in other words a couple of minutes after the official end of the summer doldrums – the Big boys being back together at the trading desk now, started their first short-attack of the week selling short more than 1000 contracts in one minute. Subsequently, the started down-wave led into the attained Friday low.

The Friday low was made at 1258, shortly after the Friday opening. The fact that Friday was only bought upwards in the sequel, finally gold succeeding in closing exactly at the 1*1 Bull Market Angle yet still and thereby avoiding an important sell signal is very conspicuous, according to price and time.

I mean, the Big Boys played their usual naughty game last week. Stimulate panic at the beginning of the week, fishing stop-losses of the weak hands, then cozily collecting beneath the 1265 and switching from short to long, is what they did. The fact of the Ukraine ceasefire was bought thereby. Buy on facts! 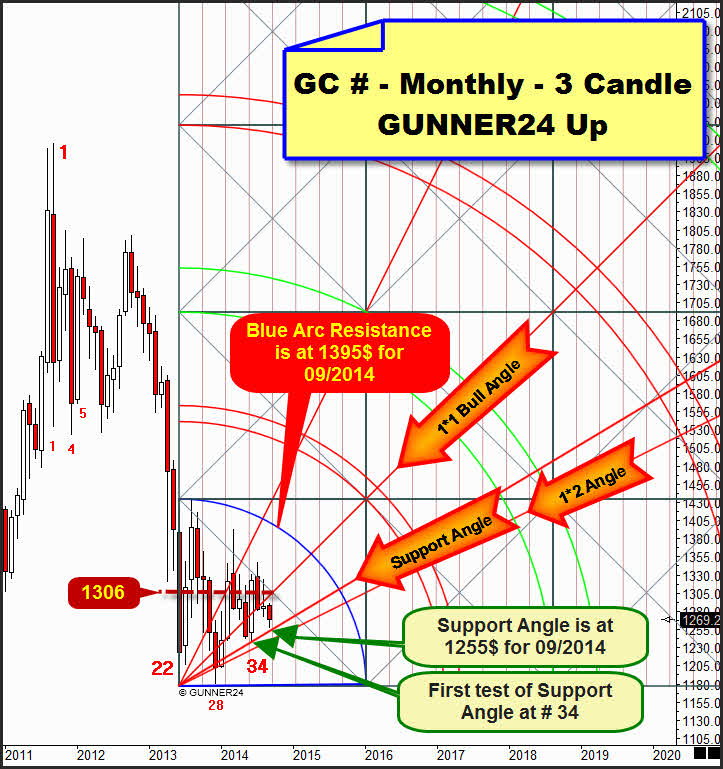 So, the 3rd higher low in the monthly time frame is supposed to be brought in with the 1258 attained on Friday. At most, next week is likely able to reach again the 1255. That’s where a double monthly Gann Angle Support for September 2014 is taking its course. So far, month # 22 of the whole correction delivered the absolute price low of the correction. Month # 28 delivered the first higher monthly low. Month # 34 brought the 2nd higher monthly low. Month # 34 tested the Support Angle at the monthly low passing above in the 3 candle up. For September 2014, this Support Angle takes course at 1255!

Also the up setup we may apply at the low of the month # 28 of the correction puts out a strong Gann Support at just these 1255: 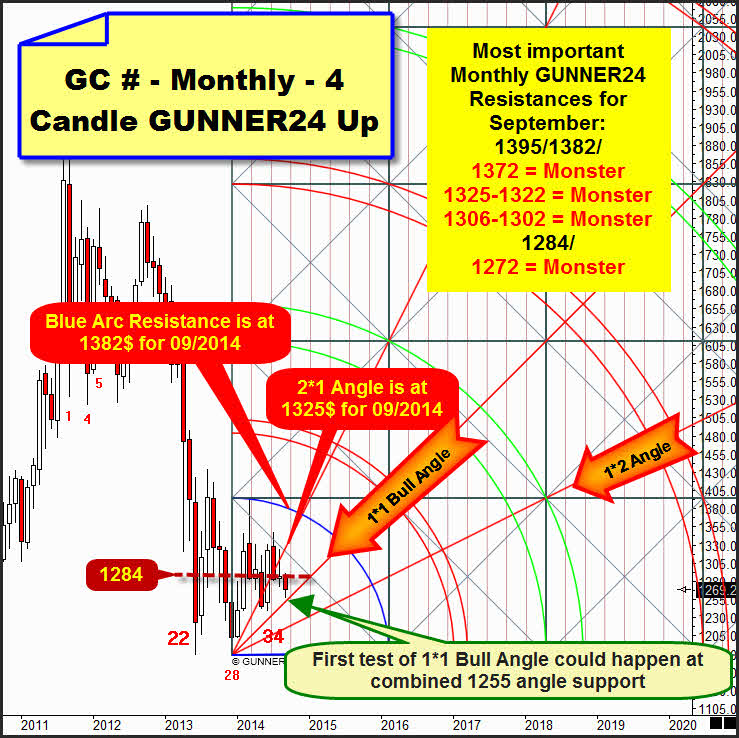 At this monthly 4 Candle GUNNER24 Up, the 1*1 Bull Angle is giving strong support in September. The 1255 mark is thereby the very last lifeline for all the gold bulls. If the 1255 is taken on weekly closing base in the course of September, as early as this month gold will be confirmed to aim at the 950-1000 in the year 2015. I think it should happen as follows however:

Traditionally, September is the strongest month for the precious metals. It will be hard for the bears to crack the important 1*1 Bull Market Gann Angle, emanating from the 2008 low. After all, it’s the matter of a secular bull market support holding almost 6 years by now – a Monster Support! Thus, gold is really expected to turn upwards sustainably next week, not later than at the 1255 mark.

With the 1258 of last Friday, September is most likely to have already reached its monthly low however. The last sell-off, started punctually after the end of the summer doldrums, looks too much orchestrated to break the 1255 sustainably as early as in September. I mean, the Big Boys have shaken the weak hands quite a lot, adding longs massively below 1265, and positioning themselves for a 3-5 week countertrend rally that will lead gold till mid-October onto one of the existing monthly monster resistances quoted above at the right in the last chart.

I estimate at least the 1302-1306 to be seen at the end of the now expected 3-5 week countertrend rally. For October, the 1322 resistance is more likely to be headed for again however. For more than two years now, the 1322 has been the most important pivot = GUNNER24 Magnet having strong magnetic effect and thereby the strongest attractive force for the gold price in 2014.

Since traditionally a weak phase in gold is due then, after working off the 1306-302 respectively 1322 in October, either in October already or at the latest in November the 1*1 Bull Market Angle Support persisting since 2008 should break downwards finally with a monthly close below 1250 at the 4th test to come. As it looks at the moment, the 4th test of the 1*1 Bull Market Angle will result negatively releasing once more an enormous downwards-energy thrust. The reason are the extremely weak upwards reactions that followed after the months # 22, 28 and 34. Nothing lasting is to be recognized there. In the big picture, gold is building on a consolidation at the lows. Those use to break, as a rule, leading to lower lows.

Why am I sure but at a 70% that we will have to expect 950-1000 in 2015? Well, I’m still expecting the "official" Russian invasion of Eastern Ukraine to happen during the cold months: October-December 2014. Again, sly fox Putin nicely duped all the western leaders with the agreed ceasefire. For this ceasefire gives him the chance now that Eastern Ukraine – as peacefully and "democratically" as Crimea – may decide per decree for an annexation to Russia within a few weeks. That permits him – see the Crimea takeover – anon a slinking and pretty uncontested underground invasion, in the Donbass region this time.

As already in the Crimea seizure, that may lead to a powerfully rising gold price. If Putin needs tougher remedies – invasion by armed force – I’ll see gold to fall severely, since a violent invasion of Eastern Ukraine will make the world drift off into the recession = deflation.