Since about mid-August, we’ve been working on the extremely certain assumption that the whole precious-metal complex will have to correct till Labor Day by virtue of this elliptic magnet:

Within the Gold Trader - watch 08/23/2016-Gold Trader alert above – we could identify an almost perfectly formed circular magnet in the daily time frame of the precious metal gold, then.

The gold-dominating magnet is not shaped 100% perfectly circular, it’s rather an ellipse.

The center price of the ellipse (1307.70) for the December contract is nearly equal to the very important final 1306-May 2016 high and the final high of the year 2015! We observe a lot of negative tests at upper ellipse resistance starting with the Brexit vote high. The current 2016 high also was influenced by the very strong upper ellipse resistance. Brexit vote low has tested the ellipse support = first and only ellipse support test.

==> The gold cycle since the Brexit referendum follows and respects the ellipse as an important signal generator!

Important to us is furthermore this:

The identified ellipse doesn’t only act as a price magnet for the current gold trend, but it’s a time magnet for gold at once (…as well as for the entire precious-metal complex…!!)

And the magnet influence of the ellipse according to time will end officially the day after Labor Day 2016 = 09/06 = coming week on Tuesday. That’s when the ellipse reaches its maximum extension on the time axis. This factor is being illustrated by the thick orange dotted vertical.

Important downtarget for the correction in the uptrend since the year high has always been the 1312-1305 zone. 1312-1305 supply a lot of support in the monthly + yearly time frame.

==> With the attained Wednesday till Friday lows, the major correction downtarget is perfectly worked off. Now follows the gold chart related to the ellipse by the Friday close: 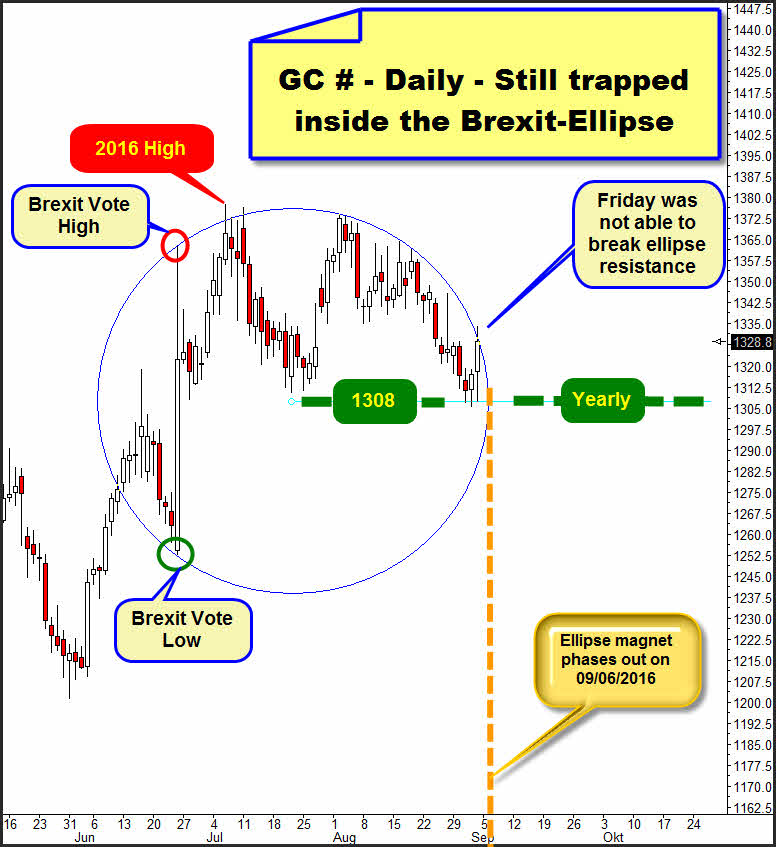 In the further course of the analysis, I’m going to call the ellipse "Brexit-Ellipse", because whatever has happened to gold since the day of the proclamation of the Brexit is to be sought as resp. seems to be directly related to this day.

Since the year high, gold had begun to correct after all, and from the beginning, this correction had one only assignment namely to test back rather exactly a 50% of the Brexit vote day range. The center of the Brexit-Ellipse is at 1307.70. Mission accomplished.

Ideally for all the bulls, the final year high 2015 – important highs always form future important horizontals – is likewise situated exactly at the center of the Brexit-Ellipse, i.e. at 1307.80! Thereby, 1307.80 is also support horizontal in the yearly time frame!

Now to Friday: Day high is/was 1334 in the December futures contract. The Friday close is at 1328.80. It’s quite noticeable that Friday wasn’t able to close above the Brexit-Ellipse even though there was a good chance for it. Coincidence? Of course not! …that the Friday close ensued most narrowly below the Brexit-Ellipse – coincidence? Of course not!

The Brexit-Ellipse keeps being important resistance till it expires in terms of time, till its effect end officially = naturally = mathematically ==> The day after Labor Day = 09/06.

Certainly, the lows of this correction finally being reached now with the 1305.50 Thursday low can just be logical. With a 90% of probability! I mean, it can only go upwards now.

The first official buy signal is the first daily close above the Brexit-Ellipse. Any natural resistance that was pre-defined by the day range of the Brexit vote is therewith overcome finally.

I’d still like to present you a "nice elliptic idea" that we would really have to be able to use for the best long-entry concerning time and price before we come to the assessment of a presently very path-breaking GUNNER24 Setup:

Somehow, it seems to me not far to seek that gold found resistance with the 1334 Friday high at the red depicted ellipse magnet – a very important even though probably just short-range important resistance.

The red ellipse likewise seems to be providing now resistance that is natural = in mathematic terms correctly derivable because the Brexit vote low as well as the reached year high can be connected directly with the Friday high.

==> Well, since the red ellipse is defined by the current year high, it’s matter of important resistance in the yearly time frame = usually very strong resistance!

The red ellipse intersects the time axis on 09/07/2016. Hence, its temporal magnetic effect ends one day later than the Brexit-Ellipse. Interesting. It’s interesting cause if gold on the one hand delivers a daily close above a certainly existing double elliptic magnet, afterwards some enormously strong = powerful - I really mean powerfully strong up-forces would have to develop.

Interesting it is on the other hand because the Big Boys – in great measure they come back from vacations on Tuesday – are likely to use the first two trading days after the Labor Day for quick shopping – as indicated by the red ellipse.

I mean, the Big Boys will press down gold once more till Tuesday and/or Wednesday before they let gold fly free then definitely resp. because then the magnetic effect of the Brexit-Ellipse as well as the influence of the red year resistance ellipse will have vanished:

At the extreme, they will be able to press gold into the course low once more, possibly, they’ll even succeed in testing the "round" 1300 resp. the 1292 until the elliptic resistances expire:

Please put the most important focus on the Rally Angle in the 5 Candle up in the monthly time frame applied above at the 2015 bear low.

Gold topped classically and textbook in the 8th month = Fib number turn into the current year high. Thus, the year high is important, it might have finished the entire bull market. But I don’t think so. I keep on expecting that the bull market – likewise classically – will last 13 months till its final top will be found. Major price-target for this bull 1400-1430.

# 9 of the bull market, the just passed August was thereby a correction month. # 9 closed scarcely above the monthly low just like the last correction month # 6-May did. Thus, in the end August performed the same way May did. Telling!

The same way as month # 7 – a mighty uptrend month did, the current September candle opened visibly clear below the Rally Angle. Somehow, presently it looks as if the current # 10-September wants to perform just like # 7-strong uptrend month.

==> If the current month of September re-conquers the Rally Angle - on daily resp. on weekly closing base - such an outcome should release enormous up-forces! Just like the # 7 course.

The September low tested pinpoint back the first square line that striking precisely matches the final high from 2015.

As outlined in detail above: 1312-1305 is extremely important and strong support in the monthly as well as yearly time frames. + Brexit-Ellipse center support. Actually concrete!!! Actually shatter-and-smash-proof! From the September low on Thursday, it went up to the Rally Angle resistance, reached and worked off with the Friday high = 1334!

Thereby, on the one hand both September trading days tested the 1305 = Concrete Support, on the other hand they reached their currently most important resistance in the monthly time frame. It’s the Rally Angle so far.

==> With the Friday high, thereby the Rally Angle resistance and in addition the elliptical yearly resistance were reached. Therefore, the Big Boys might really press gold down again the coming days. Likewise outlined in detail above.

And well, if panic arises early in the Monday morning, the Big Boys being able to press down again, because they want to go shopping, the extremely thin traded Labor Day will certainly be the ideal moment to trigger such a panic move.

Gold is supposed to rise from 09/07 at the latest.

The due daily upcycle is supposed to succeed in reaching at least 1255-1260.

September will likely be the month that delivers its low at the beginning and its high by the end.

Current monthly Rally Angle buy signal: Since the Rally Angle takes its course at 1334 for September, each daily close above 1334 will signify an important and strong buy signal. With such a close in the course of next week, also the double existing ellipse resistance would be cracked.

==> This will allow the releasing enormous up-forces again that just in theory should be able to test back the 2016 high (1377.50) quite seriously!

In the gold market correction of the last weeks that might confuse a lot of traders the professional signals have got their special importance. You get them in the GUNNER24 Gold Trader!