Palladium is simple – not complicated

Best money is easy money. Time and again, I’m glad do present to my loyal readers some trade setups that are easy, uncomplicated and from my standpoint very safe. Alas, that kind of setups are few and far between like four-leaf clovers and mostly likewise difficult to discover.

Today, I’d like to give you the follow-up on my most recent Palladium-Stealth Bull Market analysis of June-4-2017. Easy, clear, uncomplicated is the appearance of this palladium bull, including its coming targets. Easy money, is what I think… 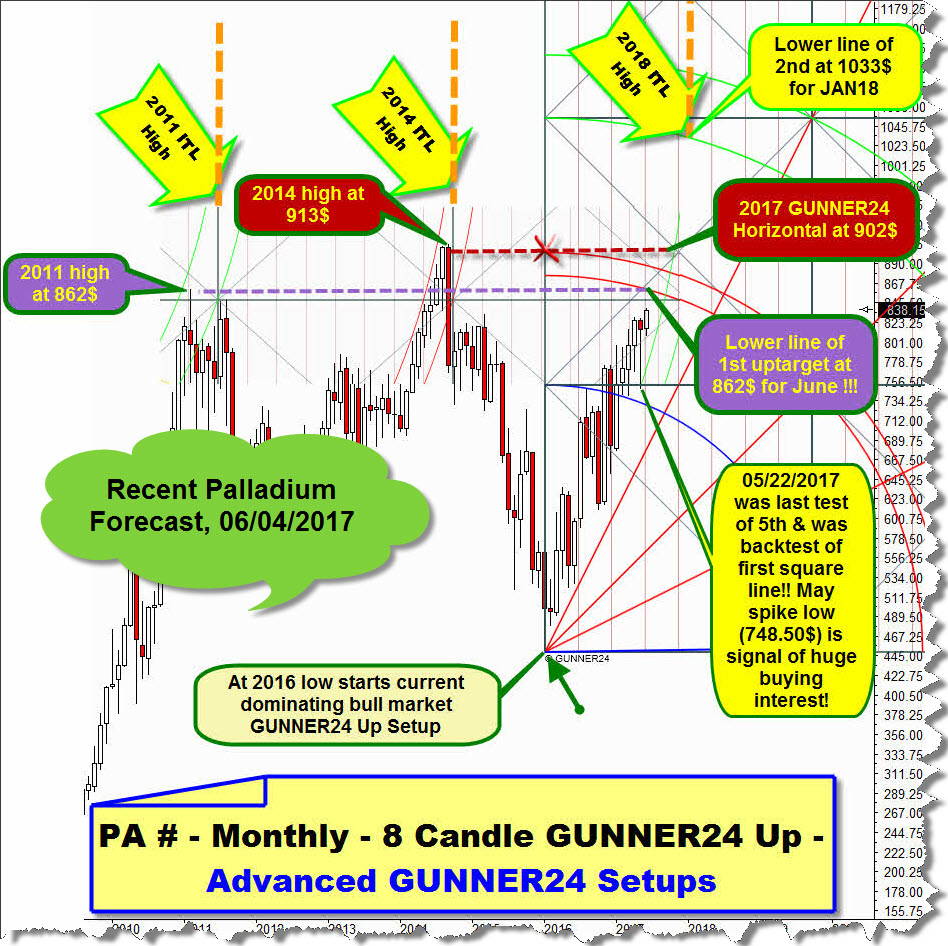 In the June analysis, I committed myself to the statement that technically palladium wouldn’t be able to top out before December 2017 resp. January 2018 thus being supposed to be able to find its next important bull market high in this period. Furthermore I tied down predicting also for the trading year 2017 – just as happened in 2016 already - that the metal would nail into the chart a crystal-clear uptrend year (year-lows near open!/year-highs near close!).

While the entire spectrum of industrial and precious metals have been rising recently (the latter on the back of Chinese demand hype), Palladium prices exploded on Friday, the very first September trading day, out of nowhere (biggest jump in 7 months) and the nearest palladium future contract closed 46.55$!! or +4.99% higher.

Together with US Copper palladium holds at top of the best gainers in 2017, outperforming any important stock market index by large. The YTD performance of palladium is at whopping +47% and with Fridays monster advance palladium indirectly confirmed the next received GUNNER24 August 2017 buy candle.

Palladium has now reached the PARABOLIC STAGE after the received final upside break of the 1st double arc resistance which was former monthly resistance area!:

==> Thereby, the lower line of the 2nd double arc being reached is plainly confirmed now being worked off yet in the course of the year 2017 with a probability of more than an 80%.

Altogether,the 1st double arc environment was not able to restrain the bull for more than two month candles and much less impede it. the 1st double arbeing finally overcome at the # 20-August close fueled some new mighty upforces, since the # 21-September candle pulverized also the purple-dashed DECADE RESISTANCE on daily – and much more important – on weekly closing base as early as in the course of the first trading day of the new month.

The rising purple-dashed DECADE RESISTANCE is defined by both important highs of this decade, the 2011 top and the small higher 2014 top. So, of course the recent first weekly close abive the DECADE RESISTANCE has to be interpreted as a powerful bullish signal.

==> Palladium is on fire! All the important resistances are breaking, we’re witnessing a short squeeze that’s really heavy = PARABOLIC STAGE is reached.

==> That’s why this is valid: In case during the coming hours or on Monday resp. at the latest till Tuesday the metal wants to test back the rising DECADE RESISTANCE that was far overshot on Friday, that’s where = 952$ will be a really good long-entry!

I’ve got no doubt about the lower line of the 2nd double arc, the next higher important monthly uptarget of this bull market to be worked off already resp. yet in the course of the # 21-September 2017! The probability to be is at more than 80% now, A) because the 21 is a Fib number as you know, an important high one. At such important Fib numbers resp. near such, extremes happen very frequently. In the case of palladium we have – of course - to assume that the # 21-September might deliver a next important bull market top.

A) Most important uptarget for September 2017 is the lower line of the 2nd upmagnet resistance. At 1038$! That’s where this bull market may finally top out and where a new multi-month lasting downtrend may start, resp. is allowed to begin!

B) After the Friday move, one thing must be for sure, namely that the "round" and extremely important 1000$ mark was already activated as the next higher and the next important target of the parabolic ascent before North Korea’s (NK) subterranean H-bomb test that ensued several hours ago!

Hours ago, North Korea (NK) underground ignited – as to their own statements successfully – the "mother of all bombs" newly convulsing the markets and global peace.

USDJPY and AUDUSD might open the new week also about 0.5% lower. Correspondingly, gold should start into the new trading week approximately with a 10$ gap (at about 1340$ then), if the news situation doesn’t alter.

All these stock-market negatives and precious-metals positives – at least in the short term – coincide tomorrow with a US holiday (Labor Day) being open only the futures markets. So the situation is volatile, since normally a thin trading volume would be expectable.

A wild-card trading day is impending. An all-is-possible day… gold, silver, platinum, palladium futures are supposed to be subjects to savage variations – ups and/or downs, still influenced by the European trading that always likes to exaggerate (up or down) when the USA is celebrating bank holidays.

With very high likelihood, the precious metals will put down a lush uptrend tomorrow however. Yet they also may form false trends, fake highs, resp. they may even top out finally, since the precious metals like to produce historic highs on US bank holidays. That’s shown by the past…

Maybe palladium future rises by another 40$ to 50$ within the next 24 to 48 trading hours. Thus, as early as Monday or Tuesday resp. till the end of the week, it might reach its worked-out monthly 1038$ bull market uptarget finally working it off.

I think, at least the 1000$ might be worked off in the course of Monday already. However, whether this Gann Number Threshold will be able to provide short-term resistance is what I dare to doubt. At least it’s signaled by the long-term weekly 21 Candle above whose upwards measuring starts at the blue 1, the November 2016 low.

==> Cause, the last couple of weeks, without much ado palladium succeeded in marching through the 913$ environment – the important 2014-high environment – as well as through the 1st resistance double arc environment. With the close of the last candle, the Resistance Angle that had still provided resistance at the top of the candle before last and the second before last was unambiguously overcome. At the same time, also the break of the 933$ MAJOR IMPORTANT GUNNER24 Horizontal succeeded.

The final strong overcoming of the Resistance Angle and the 933$ horizontal is another GUNNER24 Buy Signal in the weekly time frame. Thereby, at the moment it looks as if the metal will perhaps have to reach and work off its activated lower line of the 2nd double arc uptarget as early as in the course of coming week = 1018.50$.

Thus, we have identified two important pending PA #-uptargets now, scarcely above the current quotations. Both might be reached on Monday. 1000$ and 1018.50$. Both marks = important resistances may trigger a deep but usually short-lived PULLBACK/DIP!!

By the way, the monthly 1038$ uptarget is likewise verified by the weekly 21 Candle up above, since the weekly setup reveals a natural GUNNER24 Horizontal Resistance at exactly 1040$.

==> 1038$ to 1040$ is thereby a combined weekly and monthly upmagnet. Well, because of its attractive force, an established resp. existing combined weekly and monthly upmagnet always makes likely such an upmagnet being worked off and reaching the target in the current trend move. 1038$-1040$ MIGHT!!? to be reached still in course of September! The time factor points to that.

Until the 1038$-1040$ are worked off, I suggest you to buy ANY "deeper" PULLBACK/DIP down to the 3 currently most important supports which are:

A) 952$ if reached next week. No matter when! At the rising purple-dashed DECADE RESISTANCE. See monthly chart.

B) 946$ if reached next week. No matter when! That’s where the just taken finally upwards taken Resistance Angle in the weekly chart takes its course. Technically, the Resistance Angle has to be first and strong rising weekly support!

C) Strongest future support at all is supposed to be the 933$ horizontal now. Buy there resp. open there another long-position for the 1038$-1040$ possible final bull market high if reached till September-15-2017.