It was a close shave

In the last issue, we expected a rebound at one of the Gann Angles, and we speculated on a daily Gann Angle Retracement we wanted to use for a long entry. We supposed the low would be at about 1060-1055 last Tuesday (+ 2 days of elbow room). But on Wednesday the market produced its low at 1040, one floor down after all (the E-mini S&P 500 future contract rules!). That's where the S&P 500 almost reached the setup-anchored Gann Angle but it did not produce any reversal candle. Not before Friday the rescue attempt turned out well. By another test of the 1040 a double bottom was generated. Then we went long at 1058.50, after the break of the first square in the 15 minute GUNNER24 Up. Next target is at 1078.

By the Friday closing now the market is within the range of the first double arc again which is going to present a strong resistance not being supposed to be broken in the first attempt. Furthermore, the market is just narrowly above the 1*2 Gann Angle that will be hard to overcome additionally. In the course of the week it may be tested again. Besides, now we'll have to watch very carefully the daily course of next week and the behavior at both mentioned resistances in order to make sure it was a higher low what was produced on Friday and we suppose since 07/04/2010 that the downwards correction was finished by the July lows.

The following items would seem to indicate that we have tested successfully the 1040 and no further test of that mark will happen:

1. A double bottom at a Gann Angle was produced. W.D. Gann: "When price meets time, a change is imminent".

2. A strong rebound on a Friday which is always a sign of a change in trend.

3. As analyzed in the last issue the downwards pressure starting from the April highs on daily basis is supposed to have ended. In that issue I mentioned a surprise, an invisible lever which had been thrown being able to take us all by surprise... In the final analysis that means there is a great chance that we might see surprising, violent rising markets.

4. If Monday through Wednesday of next week take a rather positive course, Thursday sells off and Friday turns back upwards we will possibly be able to work on the assumption of a definite change in trend (the course of a week within an upwards trend, according to Taylor!).

5. Labor Day in 2010 is on Monday, the 6th of September. The markets often rise into that holiday.

6. In the following weekly 8 Candle GUNNER24 Up Setup the primary Gann Angle stood the test successfully, that's why we can almost surely assume that next week will be positive. With the result that we are expected to see two more two more weeks of generally rising prices then.

The following considerations would seem to indicate that a new test or break of the 1040 might occur:

1. The mentioned slipping down of the market, one Gann Angle down changed the target of the buy target in the above 8 Candle GUNNER24 Up. Originally, the buy target was at 1137. Now it is only just at 1105. That indicates a lower high in the daily time frame and a "rough and turbulent" October.

2. The upswing that began on Friday might not last long. In the course of next week the resistances in the daily 8 Candle GUNNER24 may take effect (Gann Angle at 1064/temporal influence of the first double arc) meaning a new test of the 1040 or a break respectively until 09/10. That means 980!

3. In the following weekly 8 Candle GUNNER24 Up there's a hard resistance lying at 1078. So as early as Monday/Tuesday the downwards dive may be going to get the upper hand again.

Let's get onto the subject of the weekly setup now. At first a little look back. In the issue of 08/15 GUNNER24 prognosticated the intense test of the 1050 at the primary Gann Angle: 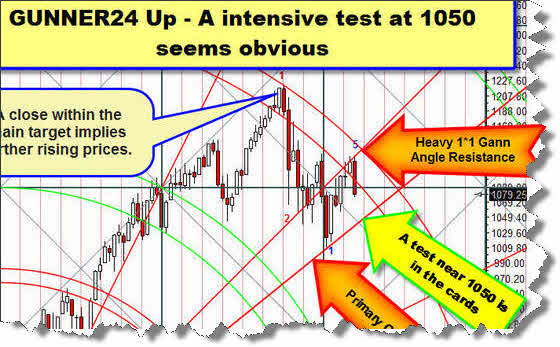 This is how we're positioned today: 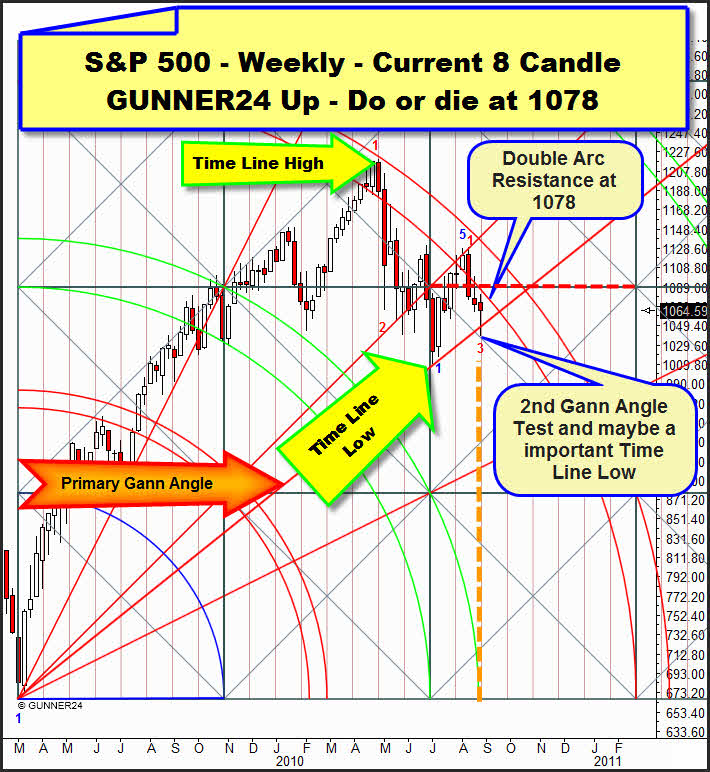 So the test proceeded successfully. Exactly at the end of the temporal influence of the 2nd double arc, on the time line, according to the rules an important low must have been produced. The primary Gann Angle was tested for the 2nd time resulting in a violent rebound. According to Gann the Angle should not break before the forth try. As we can see the resistances in the setup are not far: The lower line of the main target, the 3rd double arc is lying at 1078. That's the resistance that will make me cover the half of our long positions there. I'm relatively sure that next week at 1078 there'll be a real wrangling. The week count is very positive. 5 weeks up since the July lows, now 3 weeks of correction. If we don't produce a lower low next week the driving force resultant from the rebound of the primary Gann Angle may be enough to break the 3rd double arc in the long term. That would be the signal for long positions on weekly basis.

Assuming that in case of significant lows which arise before the main targets we may apply a new GUNNER24 Setup the 5 Candle GUNNER24 Up would look like this: 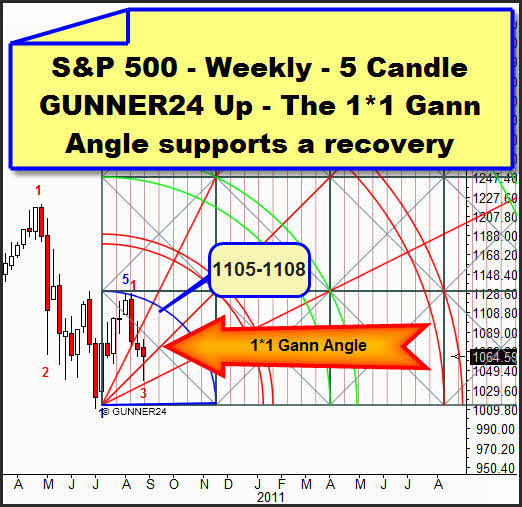 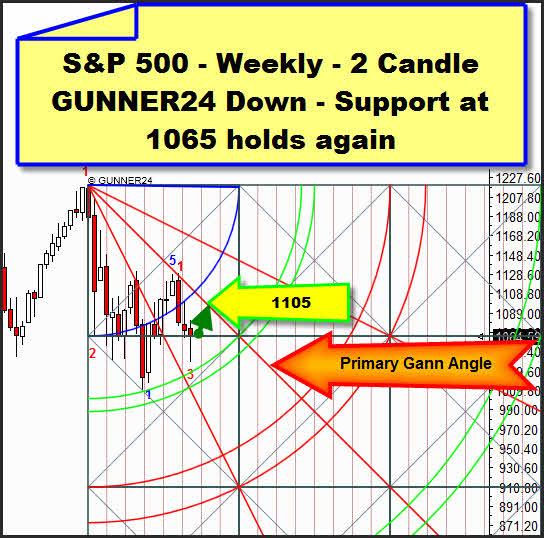 In the weekly 2 Candle GUNNER24 Down the market is sitting on the important support again which is the lower horizontal of the first square at 1065. The primary Gann Angle is within reach again, forming an obvious target. The 1105 limit the upswing. And there another rebound downwards should happen.

Conclusion: At 1078 we will cover the half of our daily longs looking for another long entry at about 1050. The 1078 might be reached as early as Monday or Tuesday. Then we'll look for another favorable long opportunity. The week low may be at 1050 on Thursday. The resistances which are in the week setups at1078 and 1105 are pretty strong making their break on the first go almost impossible. That's why all the longs will be covered at 1105.

Well, let's have a look at the actual monthly 3 Candle GUNNER24 Up to analyze the long term situation: 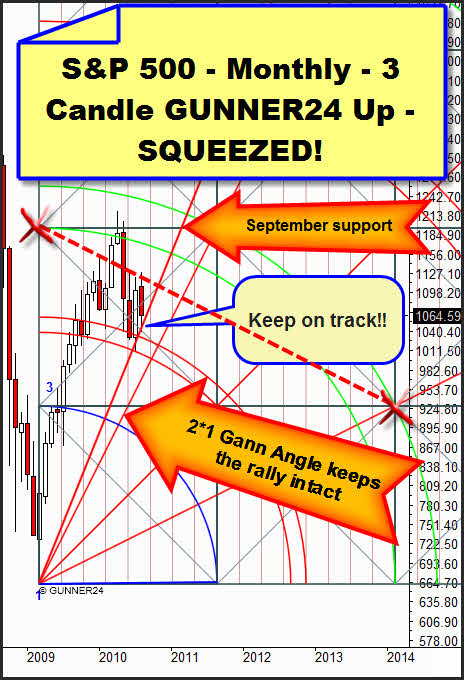 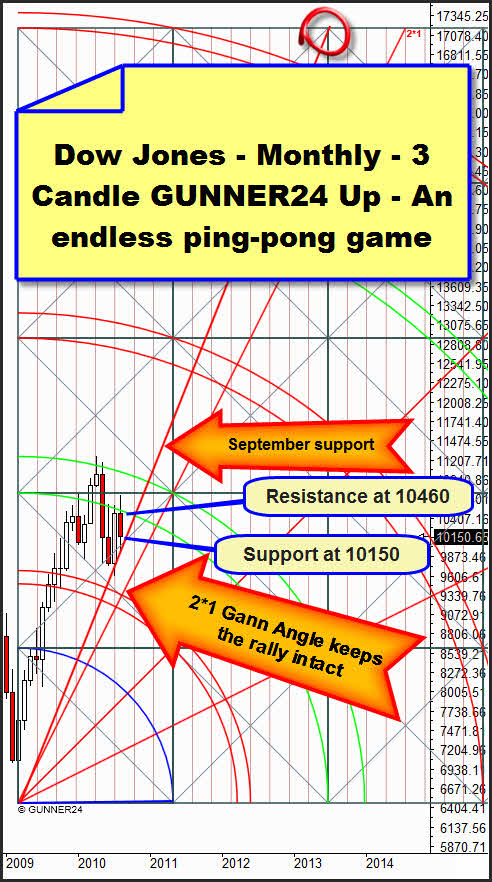 Its volatility makes the September most exciting and turbulent because the markets have jammed themselves extremely between the monthly GUNNER24 Supports and Targets. This situation is illustrated best by the monthly 3 Candle GUNNER24 Up of the Dow Jones. Above the price, there's the lower line of the 2nd double arc lying at 10460, from below the marked is supported by the primary Gann Angle at 10150 in September. For the last two months the Dow has been rebounding between those two important points back and forth. September will dissolve this situation.

The GUNNER24 Forecasting Charting Software will show you a completely new and highly successful cycle technique. You will recognize turnarounds with bull’s eye precision in advance and, most importantly, you will also be able to see at which price levels the cycles will in fact change. After a brief period of learning, you will already have developed the skill to anticipate market movements. The special GUNNER24 Cycle Technique will open your thinking to a completely novel approach. You will identify milestones of paradigm shifts that have absolutely nothing in common with the conventional and obsolete cycle technique. They are absolutely innovative and have not yet been discovered. Order now! 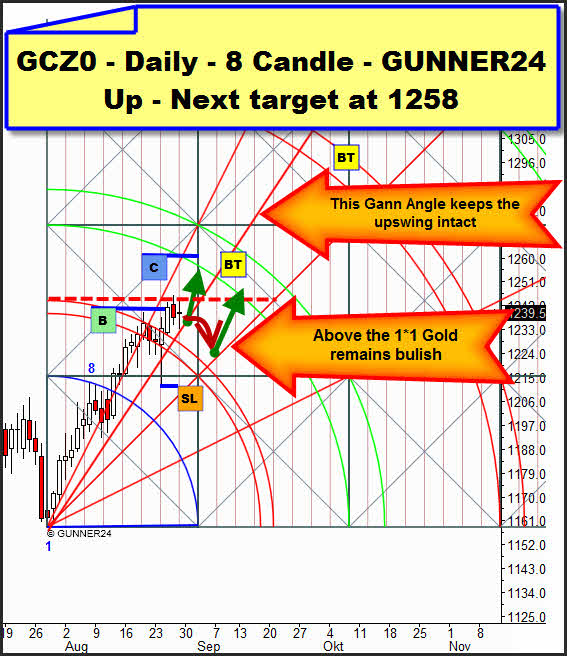 Gold has entered a little consolidation that may absolutely last the entire coming week possibly resulting in a test of the 1*1 Gann Angle as illustrated in the daily 8 Candle GUNNER24 Up. Starting from the intersection point of the upper line of the first double arc, with the beginning of the setup the market reached the resistance at 1244. Unlike the 5 candle setup we presented in the last issues now we've turned into the more expressive 8 candle setup. That makes the targets to be made out clearer. Monday/Tuesday should show whether the market goes on orienting itself to the primary Gann Angle breaking out upwards. In that case the 1258, possibly even the 1267 (see the GUNNER24 Weekly Setup below) should be reached until Thursday (lying on the important time line) or Friday, respectively. That's where we'll cover the longs for after working off the up targets at the latest this primary Gann Angle will break and in the further course the 1*1 Gann Angle should be called at. If the primary Gann Angle breaks on Monday/Tuesday the down target of the 1*1 Gann Angle would be at 1215-1220. Not before that the 2nd double arc is tackled. 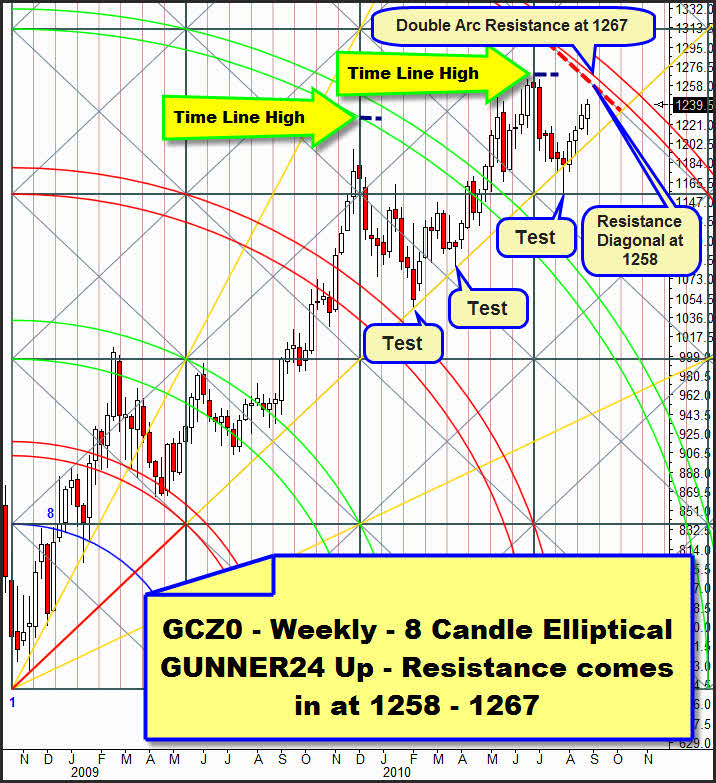 In the weekly 8 Candle Elliptical GUNNER24 Up the powerful resistances beginning at 1258 (red dotted diagonal) are only a short up tick apart. Zooming into the setup we see the 1258 and the 1267 being targets: 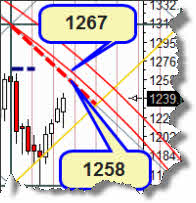 For the forth consecutive week we've had rising prices. All the same, next week we can expect the high of this upswing... in its 5th week.