Here Comes The Next US Stock-Market Up-leg

Over several years, the S&P 500 was withheld by a "Dome" Resistance shaped in the weekly charts (please mind this dome dominance here again: How some lame ducks learnt to fly – S&P 500 First Uptarget 2215). The up-move coming from the February 2016 low – the final low of the year 2016 – led to this tenacious Dome Resistance that had been taking effect for two years in length to succeed in being overcome finally in the course of April 2016, with difficulty - anyhow it was.

After having been overcome finally in April 2016, the former Dome Resistance was tested back most properly three times to a T. The last time it happened was shortly after the Brexit-referendum. After the cemented Brexit-low at the now consolidated Dome Support, the S&P 500 marched firmly upwards being supposed to reach an important first rally target at 2215 index points in the trading week August 15 to 19 (here, you find everything on the 2215 first target between August 15 and 19: Everything running smoothly for the S&P 500 – Uptarget remains at 2215).

Then, on time, the S&P 500 topped out on August 15. However, instead of 2215 just 2193.81 were summited as the present all-time high (ATH) before the expected consolidation period began.

==> It keeps on rising through the last September trading week resp. the first trading week of October. In this stretch, the major uptarget for the current rally move is expected to be reached. The major uptarget is at 2230-2232. The 2230-2232 till the end of September/beginning of October may also be the range of the final year high 2016 – with a 65-70% of probability: 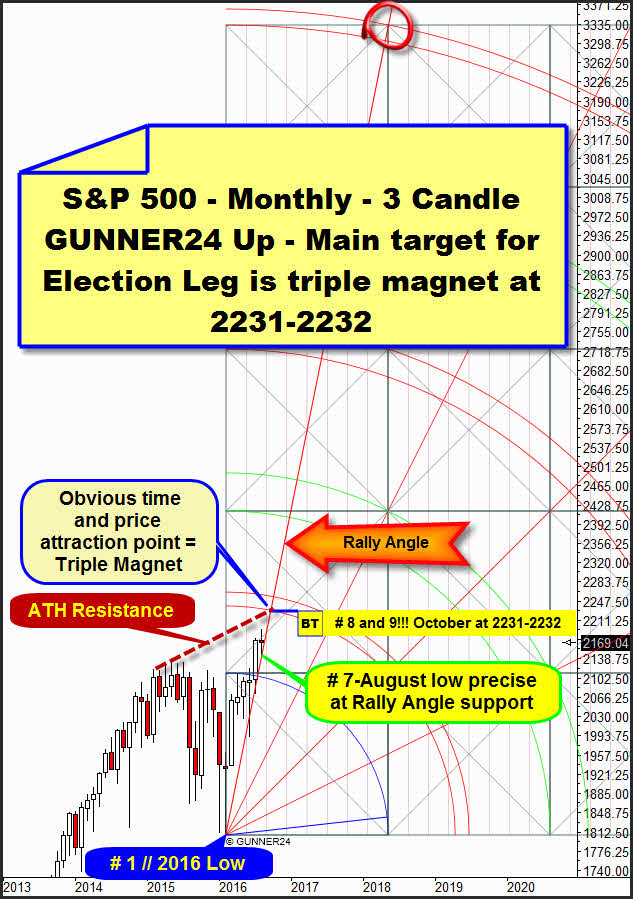 Above, you see a monthly GUNNER24 Up Setup that I’d like to introduce to you and discuss with you today. It anticipates the future development chances that may resp. have to result from the final low of the year 2016. The 2016 low was achieved in February. The first up-impulse from this low comprised 3 months, so we measure from the February low (# 1) up to the April high (# 3). The closing prices of the months of May and June were restrained by the first square line and the Blue Arc resistance. Starting at the # 6 -July low, the current up-move began at the Brexit-low – important Dome-backtest low in the weekly time frame.

# 6-July closed forcefully at the month high and significantly above the combined first square line and Blue Arc resistance.

==> With this mighty GUNNER24 Buy Signal in the monthly time frame the lower line of the 1st double arc was activated as the nearest!! important uptarget of the monthly time frame now having to be worked off in September = # 8!!!! Fib number month of this up-move, yet at the latest in # 9-October – with an 85% of probability.

The up-magnet of the lower line of the 1st double arc is traversed by the furthermore determining important all-time high (ATH) resistance in the month # 9-October, as well as the currently most important rally support ==> namely the Rally Angle anchored in the setup above is in # 9-October.

==> Important is the attained # 7-August low! Most important!! 2147.58 pts!!! Technically, through the end of the current up-move it shouldn’t be touched any more because it is pinpoint situated on the Rally Angle support.

Back to the main target of this up-leg: Thus, the 3 magnets that are currently most important for the S&P 500 combine to an extremely attractive triple magnet in September and/or October at 2231-2232 = main target + major uptarget. Triple magnets are seldom and therewith always important! Above all, they’re extremely attractive when they can be detected in the high monthly time frame!

For trading in the weekly time frame, you should mainly use the following gem now – very signal-safe and unerring, as it seems to me!:

It’s a 3 Candle up. Starting point is likewise the final 2016 low = # 1. It nails most exactly important changes at important predefined GUNNER24 Supports and Resistances.

The # 11-high came in at the lower line of the 2nd up-magnet. Both lower lows at the green ovals were triggered by the 1st support double arc that had been broken upwards previously.

The important intermediate high of week # 18 met the horizontal that is depicted red dotted.

The last important low of the whole up-move turned up textbook in the 21st week… Brexit-vote low = MAJOR LOW.

The rally starting from the Brexit-vote low succeeded in closing significantly above the 2nd double arc. Thus, the next higher activated uptarget of the rally in the weekly time frame is the lower line of the 3rd double arc resistance! Next week, the 30th week of the rally begins, so the next important top of the rally according to the Fib numbers count is rather near being supposed to be reached in the 34th rally week. Ideally, it will be at the lower line of the 3rd up-magnet.

Thereby, also the weekly time frame converts a triple upwards magnet at 2230 to become a combined weekly + monthly triple magnet for the end of September/early October. As good as can be an indication of the market to have to go there – as per GUNNER24 Systematics!

The bears are certainly down the tubes now. The current consolidation is a very bullish development that technically takes but a stimulus = trigger to be finished.

B) The 2016 2*1 Support Angle (beginning with the year low!! = so likewise angle support in the yearly time frame) as well as the

Should help the index in the course of next week – starting from the actually super strong 2156-2157 support area – to begin the next strong upwards thrust into 2230 main target for # 34.

In conclusion and at the same time as a "tidbit" of today’s issue, I’d like to show you something I detected during the summer break. I relinquish the following chart without much analysis nor talk, mainly for your own studies…

Starting point of my reflections was the obviously enormous signification of the final low of the year 2014 not only for the present but also the future development of the S&P 500. In regard to signaling and future important supports/targets etc. That’s why I just treated me to the final high environment of the year 2014:

The important week high of the year 2014 (2092.62 pts), delivered on 12/26/2014 (not the final high that was reached one trading day later) also seems to me most significant now and thus extremely important for presence and future. Applying there a GUNNER24 Setup and pulling it up a little, we see a lot of weekly highs + closings – often ATHs but also some monthly highs – that orient themselves rather accurately by altogether 6 Gann Angles since the beginning of 2015. These 6 Gann Angles are future natural price- and time orientations for the market. I marked the logical anchorage of the 6 Gann Angles in the setup with different arrow colors - the thick arrows. The thin arrows show important touches/turns at the 6 Gann Angles in the weekly.

Conclusion: Well, after exactly 8 months of up-move resp. 34 weekly up cycle, the up-move beginning at the year high is supposed to be exhausted, once again classically resp. textbook. An important monthly cycle high that might/should have to come in at the 8-Fib number in September/October is expected to be able to trigger at least an extended consolidation that may last 3-6 weeks. Depending – for there won’t be much time remaining till year end…

==> That’s the scenario my assessment is based on: that the reached late September/early October high at 2230-2232 main target be – quite possibly – the final year high 2016 already!