The stock markets have fully exploited their upwards potential

Maybe you remember my July forecasts with regard to the S&P 500 Index? On July 16, I wrote that the S&P 500 has still some upwards potential left and could - to be more precise - should rise to 2500-2495 pts till end of July 2017 before the summer correction down to a 2360 target should start. Then the leading stock market index closed the week at 2459.27 pts and I presented you the following weekly chart: 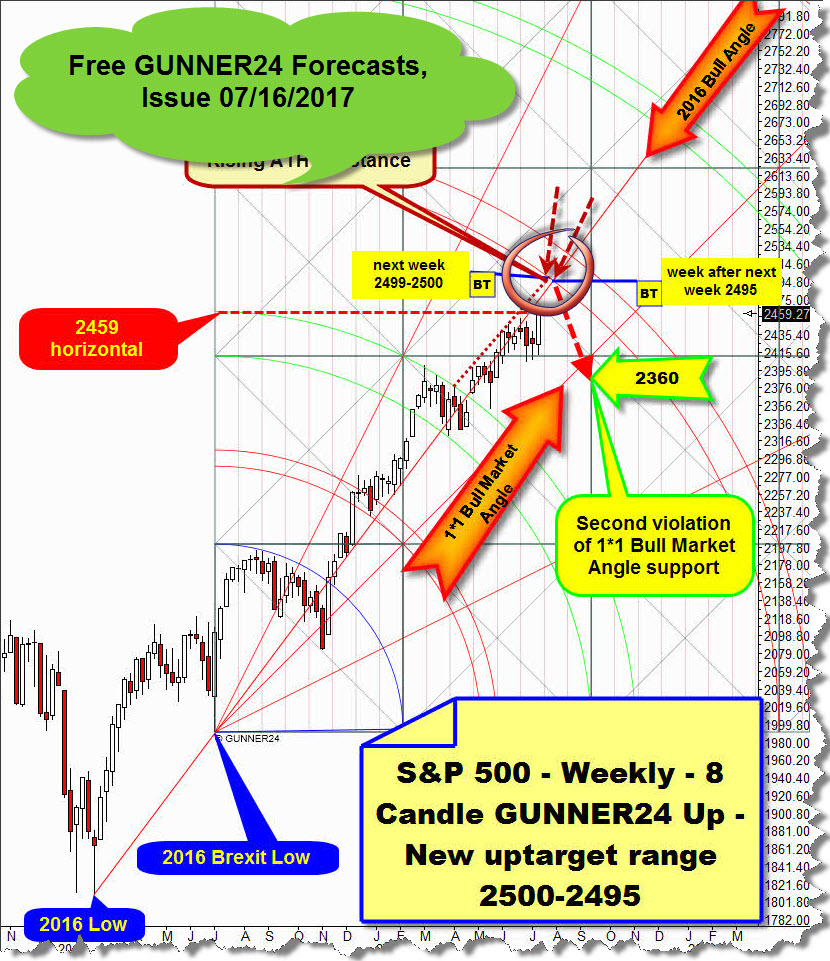 That (2459.27) highest weekly close ever achieved fired the next important and final buy signal which activated the soonest processing of the lower line of 3rd double arc uptarget at 2500-2495 pts within up to day most determining S&P 500 GUNNER24 Setup in the weekly scale which is the 8 Candle GUNNER24 Up that starts measuring upwards at the year 2016 Brexit Low. The next chart below shows that the activated upper line of 3rd double arc uptarget = main uptarget for the bull and at same time strongest future resistance for the market was worked off on August 8 at the new alltime-high (ATH):

If you now look at the current weekly chart and the 8 Candle up, the last forecast could hardly have been more precise although uptarget was not 100% accurately worked off according the price factor. The 2490.87 ATH dented and worked off the pending uptarget 3 week candles ago on 08/08. The first test of the upper line of 3rd double arc must be considered negative, because the very first test of the lower line of 3rd unfolded a bearish reversal candle and since received ATH lower highs and lower lows in the weekly must be noted.

Lower line of 3rd is a so called combined weekly and yearly resistance magnet and this bear condition means for our trading decisions:

A) that the next test of the lower line of 3rd double arc should also be a negative one. Lower line of 3rd looks strong enough to deliver an important LOWER correction high at second test, WHENEVER this test is done!

B) Therefore the next test of lower line of 3rd double arc is the Gentleman`s short entry, the best selling point cause the most riskless sell, offering tight Stop-Loss placement.

C) The very first weekly close above the lower line of 3rd is a first - mild! - buy signal and that in turn is a pretty reliable signal for us GUNNER24 Traders that the correction that has begun at ATH has exhausted and the next weekly bull market upleg is underway!

Next week will be correction week No. 4 and with +90% odds this correction has to test back at least the 2413 GUNNER24 Horizontal Support. Thats nearest and strongest combined weekly and yearly support magnet below actual price. Correspondingly the 2413 horizontal now is also a very attracting downmagnet, therefore it seems extremely unlikely that the 2413 downmagnet should not be worked off and at least successfully tested back within running weekly correction cycle.

So far the correction low is at 2417.35 made at # 3-low, means this correction needs at least one more push lower and one more lower low from my point of view! Perhaps the 2413 will be tested/seriously tested in course of correction week # 5 (Fib number), thats always a normal, natural turn signal according time.

But I still expect a downtarget at round about 2360 for the summer doldrums. The 2360 is at 1*1 Bull Market Angle for mid-September 2017 (watch the nearest orange dotted ITL), and this is next lower important weekly downmagnet according price and time below the 2413.

2360 is also a quite normal downtarget for this regular weekly downwards cycle. The 1*1 Bull Market Angle was first time tested after Mr. Trump elect, it would be quite normal for the summer correction to test that most important bull support trail out of very important Brexit Low before bull market should resume!

==> So the 2360 remains main target for the summer correction. Within the final paragraph, I want to explain exactly how I come to this target: 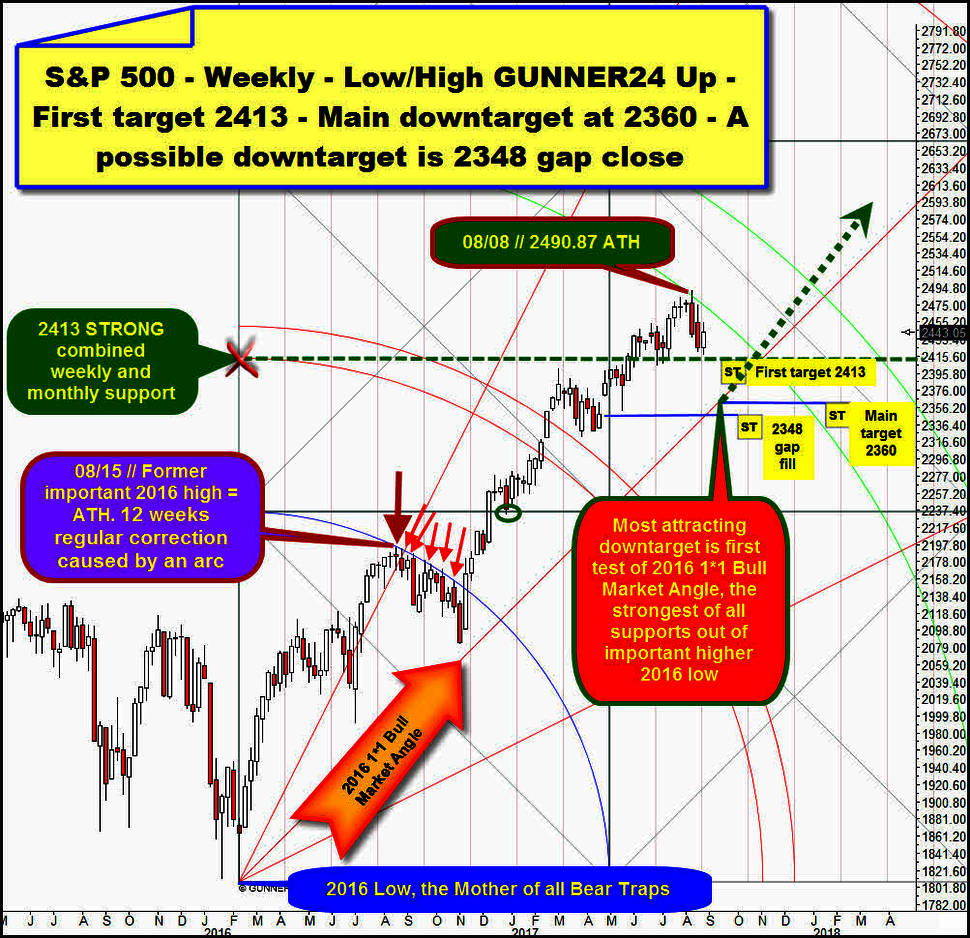 Above is another valid GUNNER24 Up Setup in the weekly time frame. This one measures up from final 2016 low and nails a total 7!!! week highs with its Blue Arc resistance. The very first test of the Blue Arc from below is highlighted by the fat dark-red arrow which was important former 2016 high and former ATH that has arrived on 08/15/2016!!!

Pretty exactly 1 year later = 52 weeks later = 1 year cycle the recent 08/08/2017 ATH has met and worked off the natural uptarget of the lower line of 1st. The 2017 ATH is in direct mathematical connection to the former 08/15/2016 ATH, both mentioned ATH`s are directly connected to the final 2016 bearish extreme.

After first test of the Blue Arc from below and starting at 08/15/2016 high a 12 week correction, a quite normal correction = a regular correction in the bull market was forced to begin. That longest weekly correction cycle of the year 2016, the year 2016 summer correction, was inspired by that Blue Arc, then also future combined falling weekly and yearly arc resistance. Corrections that follow an arc closely, resp. are mainly oriented to a falling or rising double arc are mostly only regular corrections within existing trend.

You now recognize it by yourself what I foresee... It seems somehow that the underway 2017 summer correction tends to - to be more precise - likely plans to mirror the 2016 summer developments according price/time by some extend!

==> Cause the 2016 correction leg lasted for 12 long weeks and was determined by an arc resistance and regular and also the 2017 summer doldrums correction seems to be oriented to an arc (lower line 1st above and lower line of 3rd within weekly 8 Candle up) the underway correction cycle could A) run into October and could B) bottom in October and C) for sure will be just a regular one! Such a "longer" regular correction offers the 2360 main target as most reliable downtarget and even the 2348 gap fill as "allowed" downtarget.

But it is already extremely interesting that also the Low/High up setup above fires a natural GUNNER24 Horizontal Support existing at 2413! Above the 2413 can be derived from lower line of 1st double arc. So two different weekly setup radiate major horizontal support at 2413, because of this the 2413 is a combined and very strong weekly & yearly support now and just a weekly close decisively below the 2413 finally open the gates for working off the 2360 main downtarget in the course of September 2017.

==> BUT IT IS MUCH MORE INTERESTING that the 1*1 Bull Market Angle out of the final 2016 low also is at 2360 environment for the upcoming September trading weeks! And that "2016 1*1 Bull Market Angle" never was tested before, so forming a very, very attracting backtest target for the summer doldrums!