Most traders just follow a trend. They use the different technical analysis tools to net the maximum profit out of the existing trend. Depending on the investment period we try to ascertain the respectively dominating trend direction to position ourselves in order to improve the yield. Things turn dangerous if the change in trend is not realized by the trader who has to sustain losses or even lances a series of losing trades which might endanger the survival of his account.

This is precisely why you read the GUNNER24 Forecasting Newsletter: To optimize the yield, to be always on the right side in order to avoid those losing trades. But also to get some new insights and impulses on the markets.

Today, I'd like to present you a very rare situation as to the S&P 500. It's a situation that might operate an invisible switch in the market surprising all of us with its effects... 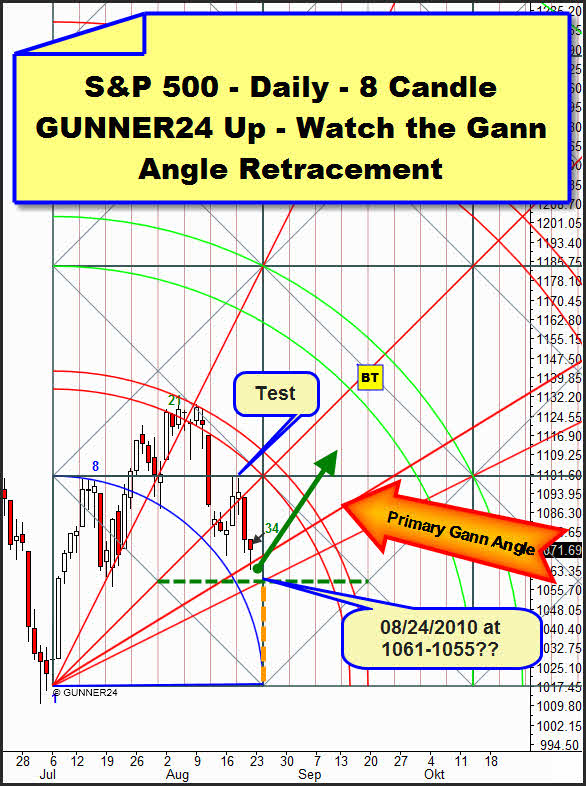 In the last issue the GUNNER24 predicted a low between 1065 and 1061 in the valid 8 Candle GUNNER24 Up. It predicted as well that we could speculate on a Gann Angle Retracement at the 1*2. Counting the candles since the beginning of the setup it's conspicuous that the absolute top in course was not at candle no. 21 but no. 25. A delay of four days. Friday was the 34th day in the current setup.  The occurrence of the delay in the candle count and the time and price magnet on 08/24 at 1061-1055 allow a swing low there. So we'll continue speculating  that the 1*2 Gann Angle on closing price basis will resist (watch the low motion!) and that we will be able to go long after a reversal candle with target 1137. 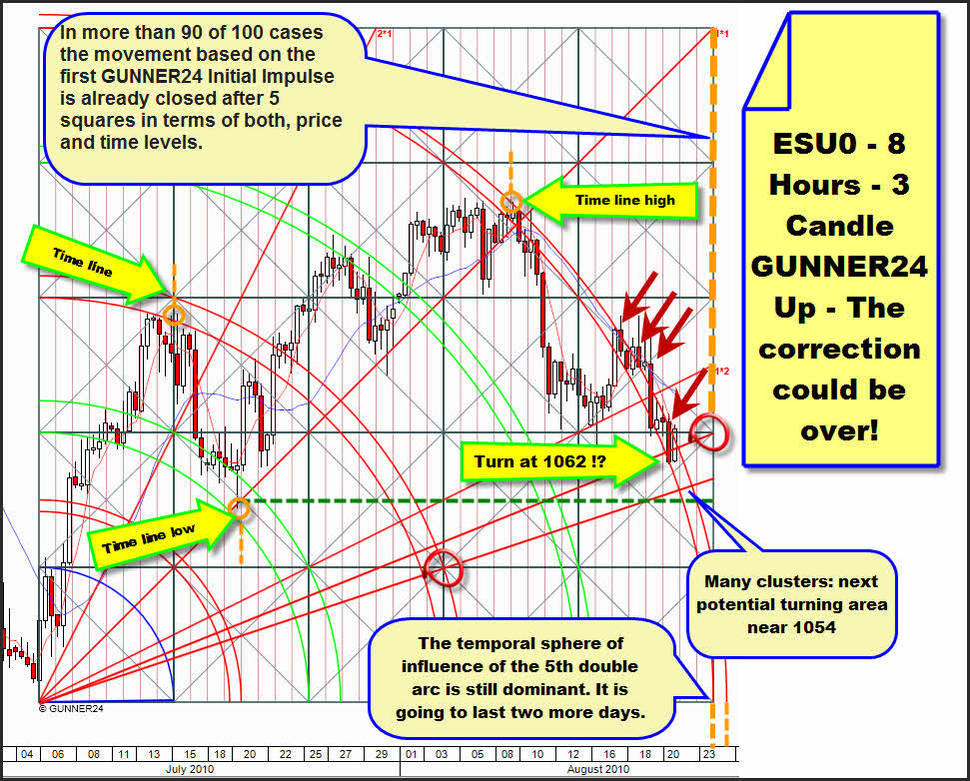 The actual 3 Candle GUNNER24 Up in the 8 hour time frame at the E-mini S&P 500 shows us that the 5th double arc is still dominating there. During the last days, all the attempts to break it were doomed to fail. Also the temporal influence of the 5th double arc lasts until 08/24, here again we can expect the absolute low in the already analyzed target zone, around 1060-1054. The recovery  that started with the last visible candle at the expiration deadline is a fact we will have to consider unconditionally. Backed by the setup anchored Gann Angle, punctually by the expiration day the correction in the upwards trend might have come to its end at 1062.

Well, so far. Let's now go to the "rare" situation which on the one hand supports that analysis but on the other hand this very situation might lead to the complete crash of all the stock markets worldwide: 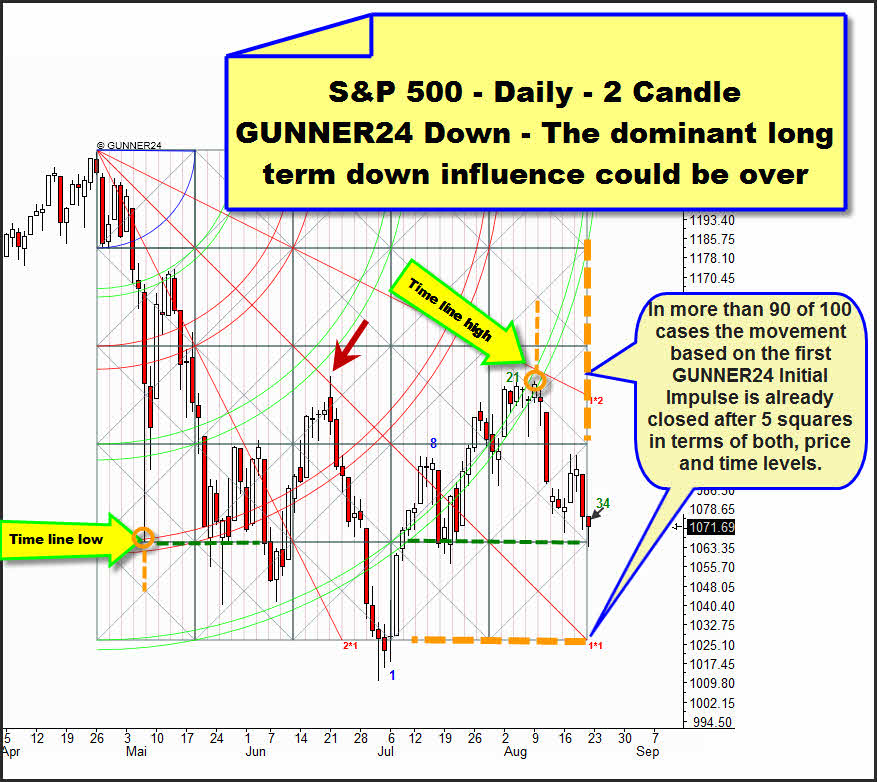 The actually valid daily 2 Candle GUNNER24 Down Setup is expiring temporally! Interpretation: A GUNNER24 Setup always begins with the initial impulse. That initial impulse turns out targets, turning points, resistances and supports for the future. Our assignment is to detect the reactions in those markets and to trade accordingly. The interpretation sometimes depends which way you look at it. It's always subjective, but it follows some strict rules. Keeping to them may lead to considerably profitable trades.

After having predicted (in its issue of 04/25/2010) the normal and important high of 04/26/2010 in the stock markets and as a result gone short, then in its issue of 07/04/2010 GUNNER24 rooted for a long entry. The reason was simple: The probability of becoming profitable was a 90% for the long entry. The quotation had reached its maximum price spread that had been forecast by the vector of the initial impulse... the end of the 5th square. It was on the important time line at the low of the reversal candle blue 1 where the new GUNNER24 Up started that we just analyzed right above. That's where GUNNER24 went long at 1028. Those longs were covered at 1129 as announced in the issue of 07/25/2010.

Well, the temporal influence of the downwards move that began on 04/27 theoretically ended on Friday. The end of the 5th square on the X-axis is reached. In a 90% of all cases now the downwards pression in the market should have ended. In this context it is interesting that the 34th candle is parking exactly on the important support (green dotted line) at 1065, exactly at the end of the setup, that means on a very important time line (time and price magnet!).

As I said: There's a 90% of probability that the downwards trend is ended. According to the rules, to wait for a daily reversal candle and to go long at it by the day closing is called for now. Pay attention to the SL-rules! But also bear in mind here our "two day elbowroom". In the daily 2 Candle GUNNER24 Down it is to be recognized as well. 2 candles are overshooting the setup in terms of price! 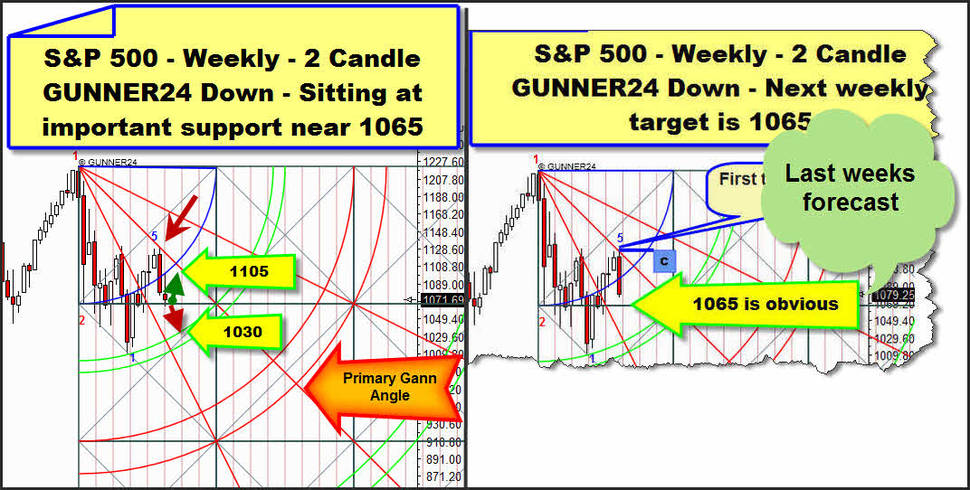 BUT: In the reverse conclusion, this rare situation would imply at a 10% that a new mighty downwards trend is beginning or has begun on 08/10 at 1129. That turns the situation very critical. Especially on the consideration that we may be going to have some downwards pressure for two more days which in case of being broken the 1050 on daily basis would inevitably have to lead to the break of the weekly supports.

As you see in the weekly 2 Candle GUNNER24 Down Setup with the week closing the market is parking on an extremely important support. Here again the 1065. A break would lead to the 1030 and to the retest of the weekly lows!

Gold and the Gann Angle Fan:

In the daily setup, last week gold reached the 1228.5 which had been aimed for. Surprisingly for me, the expiration week was a non-event, with the exception that the expiration might ring in a coming correction. During the whole week, the trend was up. Since gold closed even above the 2nd double arc the main target, the 3rd double arc is confirmed. I'm not clear yet on the targets of that up swing or on the question when and which targets will be reached. They depend on the correction or consolidation respectively which are supposed to occur. With Friday the price broke the 2*1 Gann Angle, according to the rules it shouldn't break it upwards any more. Since Thursday was lying on the important time line everything is pointing to a correction or consolidation in the upwards trend which is going to follow now. Both setup-anchored Gann Angles or the 1*1 Gann Angle respectively are correction targets. You may go long in case of a daily close of more than 1236. If that closing price is reached on Monday or Tuesday the minimum target will be 1255, but rather 1260. In that case it could not be reached before the 08/26. Depending on the depth of the correction the further price and time targets are fluctuating. See the setup above.

The weekly GUNNER24 Up shows that a long entry in a daily close of more than 1236 could be limited to about 1260. That's where not only the resistance diagonal (red dotted diagonal) but even the main target get involved. The price is backed by the support area. If gold dives into it a long entry would suggest itself.

The GUNNER24 Forecasting Charting Software will show you a completely new and highly successful cycle technique. You will recognize turnarounds with bull’s eye precision in advance and, most importantly, you will also be able to see at which price levels the cycles will in fact change. After a brief period of learning, you will already have developed the skill to anticipate market movements. The special GUNNER24 Cycle Technique will open your thinking to a completely novel approach. You will identify milestones of paradigm shifts that have absolutely nothing in common with the conventional and obsolete cycle technique. They are absolutely innovative and have not yet been discovered. Order now!

EUR/USD and the Gann Angle Fan: 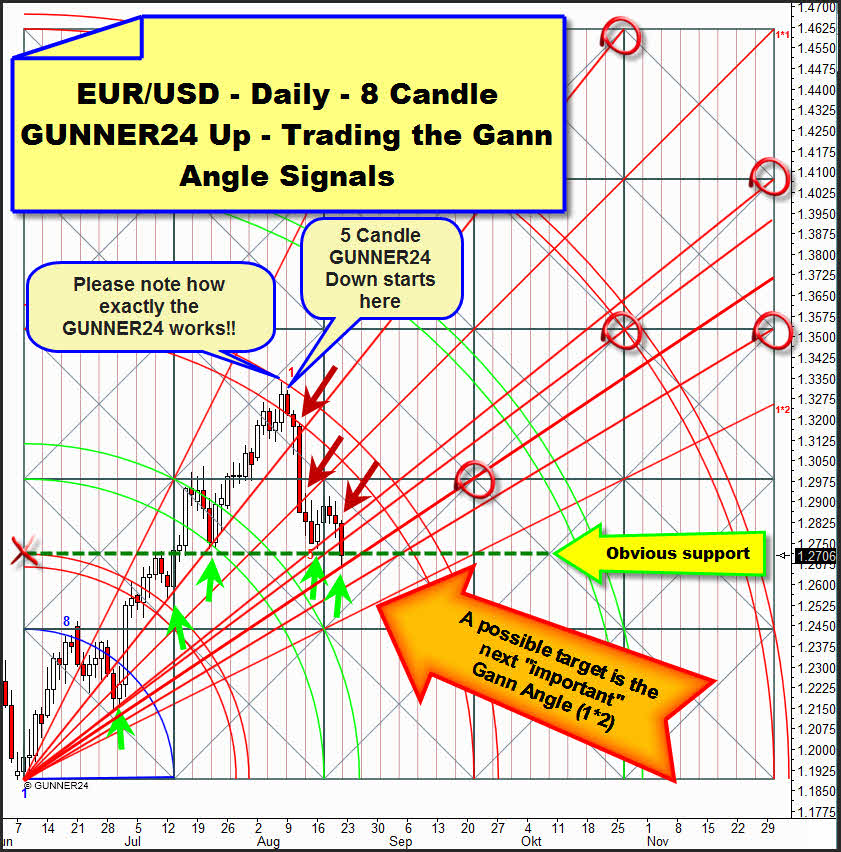 As in the stock markets, in case of the pair at the beginning of July an 8 candle GUNNER24 Up started. The main target was reached exactly. Since a candle closed within that 3rd couble arc the 4th and the 5th double arcs should be reached in the trend direction. The pair is correcting simultaneously with the stock markets.

In this setup I anchored many Gann Angles (red circles). Not only in order to show that the markets orient themselves by them, rebound from them (green arrows) or in case they are broken the market is passed through to the next or the next but one (red arrows). But also because I'd like to return to the main subject of this issue "The skill to find out a possible change in trend":

The behavior of the market at the Gann Angle mostly releases a reaction. The dominating movement is being increased (the Gann Angle increases the trend) or the dominating movement is stopped. Only that consideration leads to relatively safe trades as we see above. But it becomes interesting if the market reaction at a Gann Angle can be combined with another signal out of the considered GUNNER24 Setup. Just as the Friday candle. The low was lying exactly on the Gann Angle, and the price is parking exactly on the horizontal support that with the beginning of the setup starts from the intersection point of the upper line of the first double arc (red X). Furthermore, the Friday candle is lying exactly on a time line. In this case it should have marked a low. So, on Monday it should start going upwards.

But, merely considering the course of the correction the 1*2 Angle is a logical target, since the 1*1 Gann Angle was broken before, so the pair is in the bearish half of the setup.

To get more transparency on the further course we'll apply the actually valid GUNNER24 Down at the top of the red 1 now: 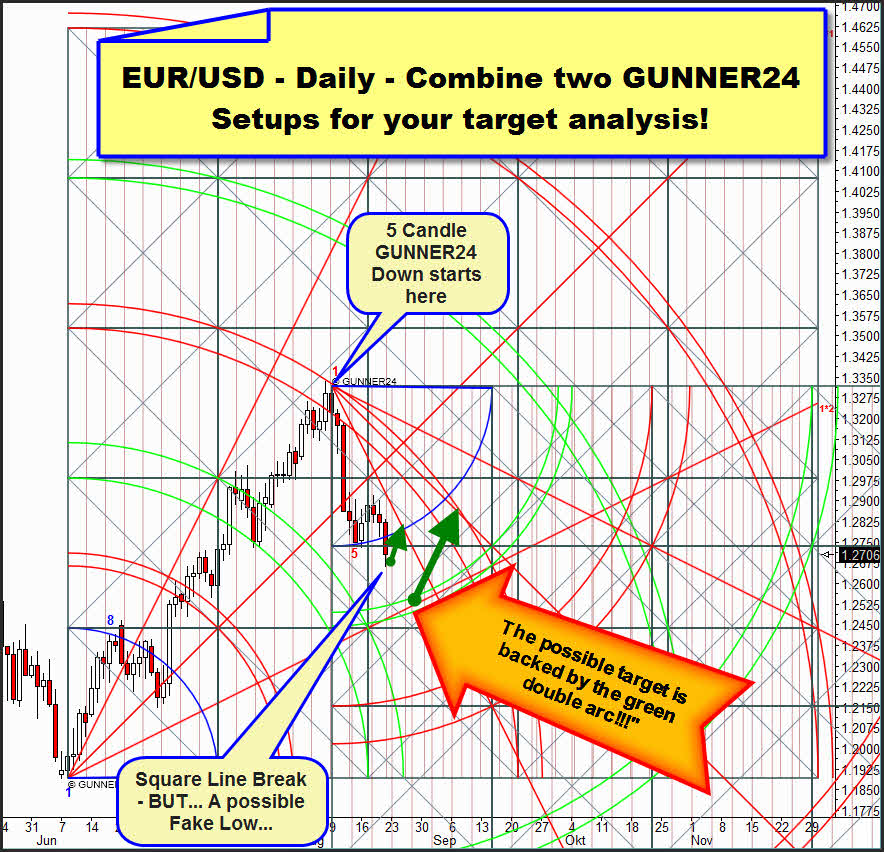 I left out the Gann Angles now. The GUNNER24 Down Setup has got 5 candles and with the Friday candle it indicates a break of the first square. Really a short signal! But the stop at the Gann Angle in the GUNNER24 Up shows that on Monday it should actually go upwards. Probably until the blue arc, and possibly even to the 2*1 Gann Angle of the down setup (small green arrow). That's where on Monday or Tuesday respectively there will certainly be a reaction again. That will have to be judged by us newly. If Tuesday or Wednesday after a possible Fake Low Trade on Monday/Tuesday closes below the Friday closing price the target would be the 1.2530 (time and price cluster from out the 1*2 Gann Angle of the up setup and the first double arc from out the down setup)!

If the price breaks the blue arc or the 2*1 Gann Angle in the corresponding GUNNER24 Down upwards to the 1*1 or the 3rd double arc of the GUNNER24 Up we will be able to expect an end of the Fake Low Trade there. If Monday closes below Friday the target will be clear anyway: The mentioned time and price cluster at 1.2530!