With the closing price of the week before last, the gold bulls succeeded in purging themselves of the so far in 2017 dominating weekly resistance that was taken upwards decisively to its full extent. Thereby, gold has activated some new uptargets. One of them – the year-high environment from the year 2015 = 1307.80 – was worked off swiftly already, it was indeed last Friday. The current year-high in gold scaled on Friday 8-18 is at 1306.90: 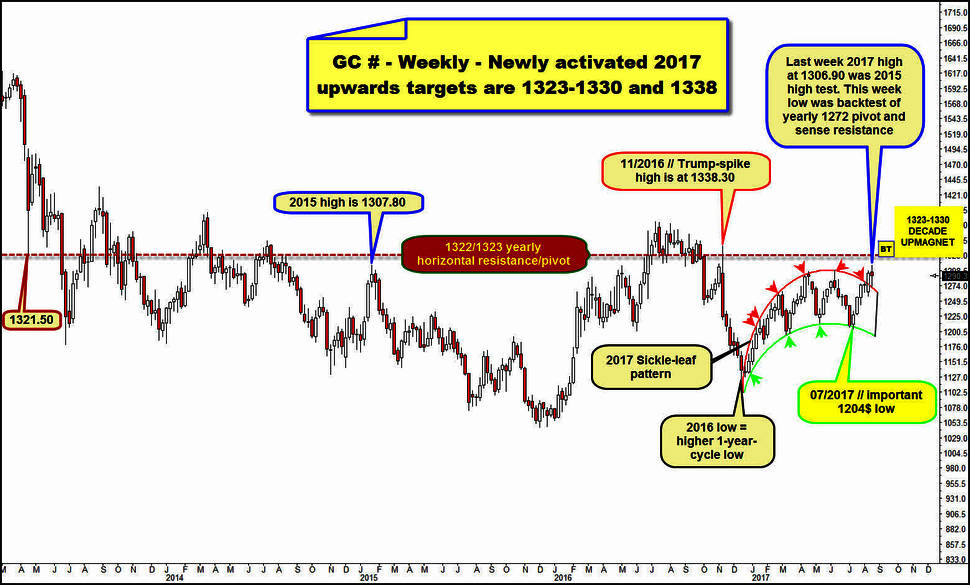 At the new 2017 year high, the current year’s very first test of the year-high environment from 2015 a harsh attack of the gold bears succeeded, so gold closed last trading week lightly negative yet. From the Friday high = 2017 high, gold was toughly sold off into the 1290.30 weekly close. No surprise, for the former year-highs are always horizontal resistances in the yearly resp. monthly time frames. Furthermore, gold bounced simultaneously off the "round" 1300$ Gann number mark on Friday.

==> Thus, pending further notice resp. till its final being overcome on weekly closing base is valid this: Both 1300 and scarcely above the 1305-1309 area keep being sturdy strong resistances.

In spite of the hefty and successful bear attack (bearish Friday intraday reversal) gold continues very bullish in the medium term, since the week candle before last was able to overcome the resistance dominating in 2017 (red/red arrows) decisively thereby activating GUNNER24 Uptargets that were higher than "only" the 1300 resp. 1305-1309.

Furthermore important is the fact that at its low (1272.70/Tuesday) the past week candle tested back precisely and very successfully A) the existing yearly 1272/1273-GUNNER24 Horizontal as well as B) the red sickle-leaf resistance slung upwards successfully shortly before: 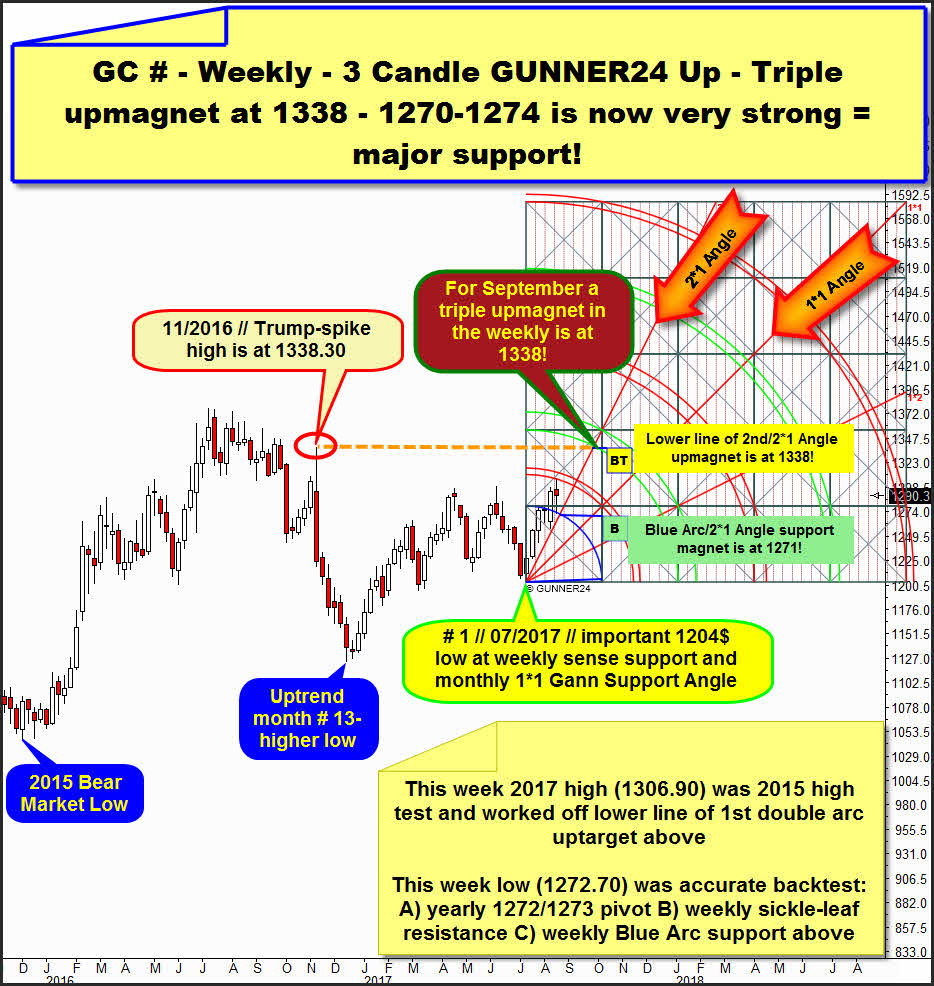 Therewith, the 1270-1274 zone is now… newly… the most important and moreover presumably strongest future support for gold, therefore being the presently best entry into new long-positions for the new, freshly triggered 2017 uptargets that are:

1323-1330 is newly activated 2017 uptarget which can be derived now from the monthly chart. 1323-1330 is minimum uptarget for the current gold uptrend situated at an enormously important upmagnet that exists in the high DEACDE TIME FRAME for September 2017. More on this after the following monthly chart.

1338 is an activated, very interesting looking triple upmagnet in the weekly time frame that can be derived from the 3 Candle up anchored above. The weekly up setup above starts at # 1, the final 07/2017 low, the last successful backtest of the weekly sickle-leaf support measuring the margin of the first 3 week candles uptrend that developed after the 07/2017 low. The setup above is absolutely confirmed correspondingly being supposed to suit as the currently most important signaler in the weekly time frame because:

A) The high of the last candle worked off to a T the lower line of the 1st double arc resistance bouncing heftily off it and B) the low of the last candle tested back to a T the Blue Arc that had previously been taken upwards. Thus, the Blue Arc above is confirmed important future slightly falling gold support. The Blue Arc above thereby matches approximately the former sickle-leaf resistance, now likewise taken upwards!

Together with the yearly 1272/1273 pivot, both future weekly supports – the former sickle-leaf resistance and the former Blue Arc resistance – form a powerful strong support magnet for the next candle resp. the one after next thus providing the "best" cause most riskless entry into new long-positions. Additional endorsement is supposed to be offered to gold by the 2*1 Angle. This one likewise takes its course scarcely below the 1272/1273, at about 1270-1271 for the next two week candles.

It mustn’t be surprising to us if gold wants to test back the 1270-1274 zone during the coming 10-12 trading days before the next upleg in the weekly time frame should/might start. Firstly because gold showed a very negative reaction to the 2015-high environment and the "1300" resp. secondly because the pinpoint working off incl. subsequent negative reaction to the upper line of the 1st double arc – all the same previously activated important weekly uptarget – allows this from the GUNNER24 Perspectives.

This is when and where the 2*1 Angle intersects the lower line of the 2nd double arc together with the 11/2016//Trump spike high forming a certainly very interesting gold magnet and a next major resistance for the 2017 trading year.

==> 1338 is triple upmagnet for gold in the weekly time frame and thereby possible final uptarget for the underway weekly uptrend. 1338 is a possible final 2017 high!

For concluding this gold analysis, as announced the look at the monthly chart, the valid 8/9 Candle up in the monthly and the DECADE RESISTANCE Upmagnet that is at 1323-1330 for September 2017:

All of a sudden, it seems quite simple to realize resp. to guess the medium-term intentions of gold. After the recognizably important 07/2017 higher low, the monthly chart downright imposes itself as eye-opener.

The up setup above starts at # 1 // 2015 Bear market low extending up to the 2016 uptrend. Since the 2016 highs, gold has been correcting the ascent during 8 resp. 9 monthly candles from the bear market low.

At the 07/2017 low, the 1*1 Support Angle was tested back successfully for the second time. And that, at the most important natural support from the # 1 // 2015 Bear Market low is where the current weekly uptrend started!

Time: Since the # 1 // 2015 Bear Market low the Fib numbers are obviously being considered when it comes to the really important turns resp. extrema. Because:

# 8-top was the final 2016 high and the # 13-low was the important higher low = higher 1-year-cycle low. The current August 2017 candle is # 21!!! of the trend/countertrend initiated at # 1 // 2015 Bear Market low thereby being a potentially important turn candle. So, possibly August 2017 wants to achieve the next important extreme of the trend. A bullish extreme! So, it’s allowed – because of the monthly count – that an important high, perhaps the final high of the year 2017 was reached last Friday.

What speaks against it is – as shown above in detail – the weekly situation. It reveals that in 2017 gold is supposed to go still higher than to the so far attained 1306.90!

It looks as if this weekly uptrend may last into September 2017. It would be the 22nd month of the trend resp. of the move that began at the bear market low, therewith it’s 22-1 = 21 Fib number.

To me, it appears now that gold either:

A) wants to compel the very first test of the ATH 1*1 Bear Market Angle. For the month of September 2017 – what a coincidence – this one takes its course exactly at the yearly 1322/1323-resistance horizontal forming there and then a so-called DECADE RESISTANCE Upmagnet, resp.

B) or now even needs the very first test = backtest of the Blue Arc resistance. This resistance arc in the combined monthly and yearly time frame resides at exactly 1330$ for the month of September 2017.

ATH 1*1 Bear Market Angle, a DECADE RESISTANCE Angle, and the well-known 1322/1323 yearly resistance together form a nearly supernatural DECADE RESISTANCE Upmagnet for the month of September that is hardly going to be overcome sustainably in 2017 and much less on monthly closing base. However, together with the 1330$-Blue Arc resistance, it’s absolutely predestined to cater for the final 2017 gold high!