Follow up to: "The Gold Miners millionaire’s trade long-setup"

Before It was within the free GUNNER24 Forecasts 06/05/2016 where I last outlined + analyzed the way the Gold Miners were to develop and the points where + when the uptargets of this Miners bull market would have to be reached resp. worked off.

I hope, that many, many GUNNER24 Traders will have pocketed a million/several millions of US$ at the end of this Miners bull market. For that: "The Gold Miners millionaire’s trade long-setup": 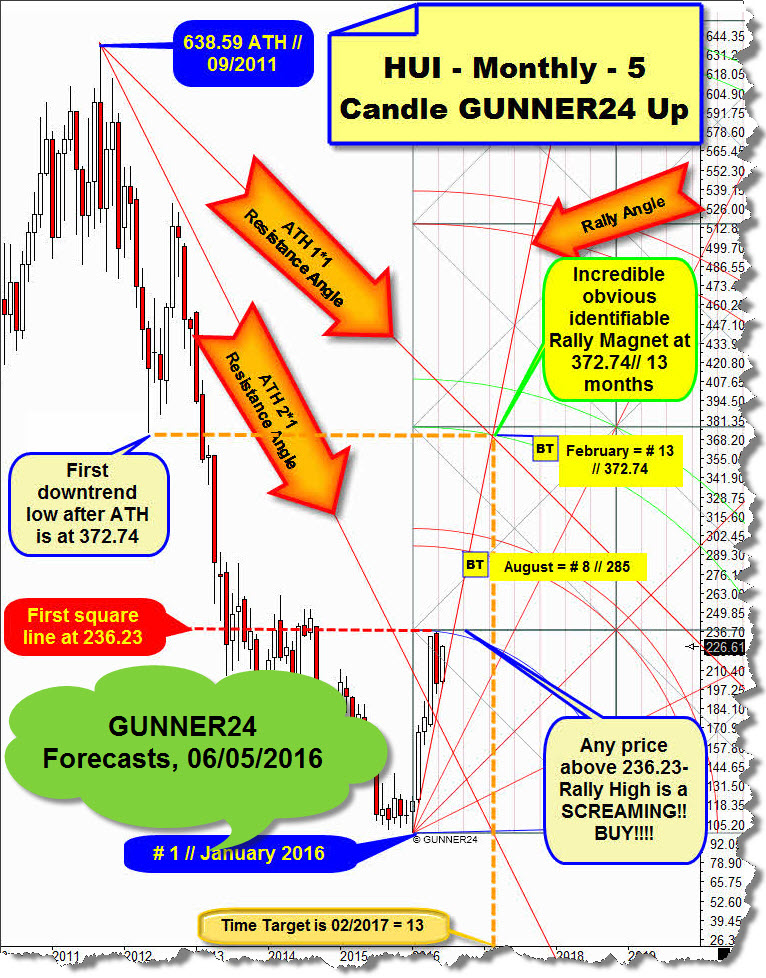 When it comes to analyze the Gold Miners I like best doing it by means of the HUI (NYSE Arca Gold BUGS INDEX).

==> In all probability we know that: A) The HUI bull market should run at least up to the lower line of the 2nd double arc resistance in the 5 Candle GUNNER24 Up in order to work off there the obviously important 372 pts rally magnet as well.

C) Thereby, consequently the year 2016 will be a flawless uptrend year for the Mining Stocks, the year low being marked at the beginning and the year high by the end of the trading year.

The last forecast didn’t allow any conclusion but the HUI will compellingly have to reach the 285 pts in August 2016, # 8 rally month because that’s where the activated monthly GUNNER24 Uptarget of the lower line of the 1st double arc resistance magnet is situated in the 5 candle up above.

The 8 is important high Fibonacci number. Thus – because price and time come together at 285 pts in August – there is the threat and the chance that the HUI will top out there for a short, perhaps even for a medium term starting there the next consolidation resp. correction move of any kind whatsoever.

==> Since the lower line of the 1st double arc arc is always a main target of a countertrend, in fact there’s all along the possibility of having exhausted there the entire countertrend move then starting a new bear market leg in the overriding bear market…

Let’s switch now briefly into the daily time frame to see + analyze what’s cooking at the so far reached 286.05 pts August high = month # 8 of the bull-run: 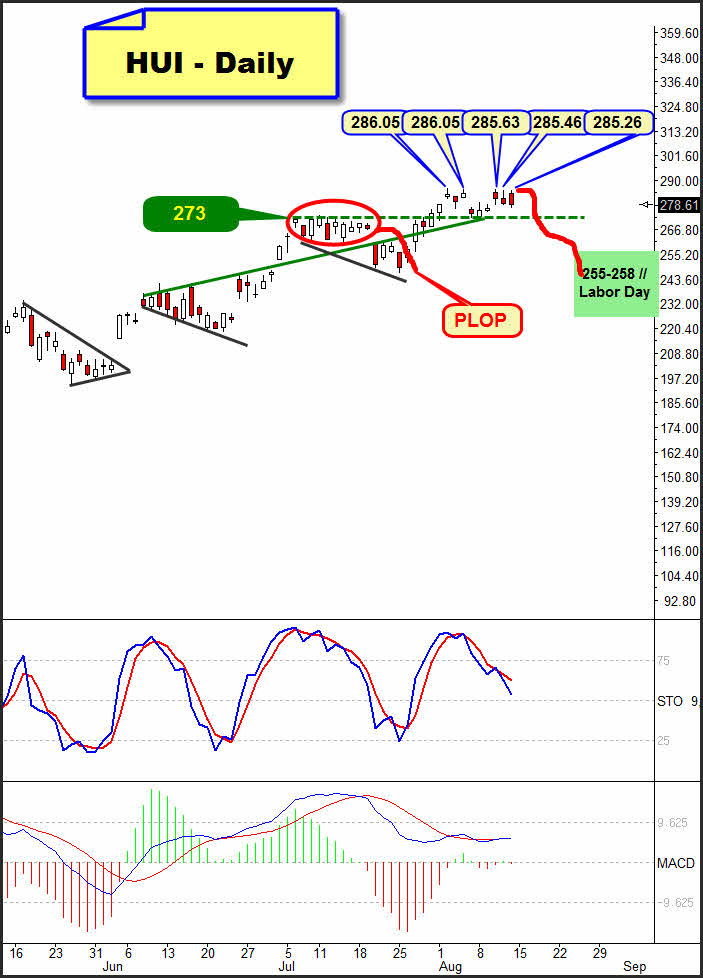 Brush-up: 285 was resp. is natural uptarget for the bull resulting from the up impulse comprising first 5 (Fib number) months. Check. The 285 was expected to be reached in the 8th (Fib number) rally month. Check. The 285 is now a resistance in the monthly time frame but also in the yearly time frame because the initial 5 month up impulse began in January 2016. Thus, the 285 is combined monthly and yearly resistance. Interpreted that means, the 285 is an extremely important and therewith very strong resistance.

The importance of the 285 is clearly visible in the daily time frame, too. The HUI has been testing the 285 for a good fortnight, not surmounting so far. The 273 horizontal is currently the most important daily support.

Most interestedly, I’ve been watching the market performance at the 285 for several days. Now I think that the Mining Stocks are not supposed to be able to surpass the 285 sustainably and significantly.

By the way…, the important S&P 500 cycle top next to be expected is interestingly timed fot August 15 to 19, as well. On this, mind again the free GUNNER24 Forecasts of last Sunday. CLICK ME!!

The current HUI topping pattern has performed so far just as the topping pattern at the 273 in the red oval. Not before several – precisely 10 – trading days = 2 trading weeks of test period of the 273, the HUI plopped down then. The 285 test will be at its 10th day tomorrow, on Monday…

==> Downtarget: In case the HUI newly plops down in the course of next week – MORE LIKELY than the 285 be overcome finally! – it will be supposed to test back at least the 260 but rather the 255-258, in fact around the Labor Day, shortly before or shortly after.

The Labor Day always marks the official end of the summer doldrums. Labor Day 2016 is on September 5. To date, the Gold and Silver Miners as well as gold, silver and the other precious metals have held their grounds quite bravely in the summer doldrums, but, hmm, my experience during this millennium makes me know that the Big Boys have always been able to force the precious-metal sector into a significant Labor Day low. If they happen to be willing to do so…

Now, we’re newly swinging into the higher time frames. At first into the monthly time frame and conclusively into the weekly. Both following GUNNER24 Up Setups are to substantiate and uphold my theory of the 260, resp. 255-258 through the Labor Day: 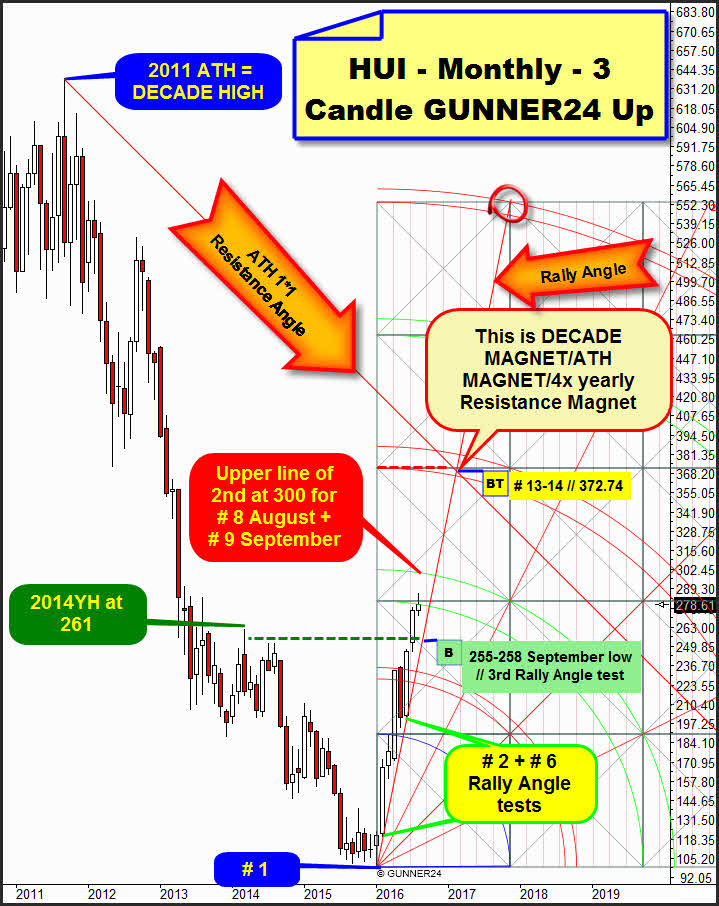 Among others, the reason why I make this setup available to you is that with its help we can discern exactly the presumptive importance of last trading week’s closing price = 278.61 pts for the HUI. The 278.61 weekly close is scarcely below the lower line of the 2nd double arc resistance (at 279 pts) that indeed is also monthly HUI resistance.

Thus, the HUI was not able to overcome either the 285 (combined monthly + yearly resistance) or the 279 – a monthly resistance arc – on weekly closing base.

==> Therewith results for the present signal situation: A first significant weekly close above 285 within the coming weeks will activate the next higher monthly magnet above the current prices. It’s the "round" 300 in the monthly 3 candle up above!! The upper line of the 2nd magnet takes its course there for the months August + September 2016!

==> By the way: Also this 3 months up clearly indicates that the bull will have to see the 372 till January/February 2017. This is simply the main attraction according to price and time. 372 is decade magnet at the lower line of 3rd double arc environment in the 3 months up. The 372 till January/February 2017 would just test back the 1*1 Resistance Angle that springs from the all-time high (ATH) = 50% backtest of the 2011 ATH till the January 2016 bear-low range…

==> If the HUI starts rebounding from the confirmed 285-279 combined monthly + yearly resistance environment, the best cause safest next long-entry will be at the Rally Angle anchored in the setup above. This one was tested successfully twice already at monthly lows (# 2 + # 6). The execution of successful tests of the Rally Angle have used to fire mighty rally thrusts.

The Rally Angle takes its course at 255-258 for the month of September 2016. Where else should one go long for the 372? Normally, such strongly confirmed Support Angles don’t break at the third test. The 2014 year high (YH) is at 261. The 260 resp. 255-258 would only test back again this formerly important resistance in the yearly time frame. I’d like to assume – cause the Rally Angle has presented itself that powerfully strong yet – that it will support + drive up the HUI till January/February 2017.

Let’s go on now into the currently valid up setup in the weekly time frame. It likewise starts at the bear low measuring 5 week candles upwards.

==> Again the consciousness emerges how important the 285 magnet really is at the moment, what a significance it has gained for the market. 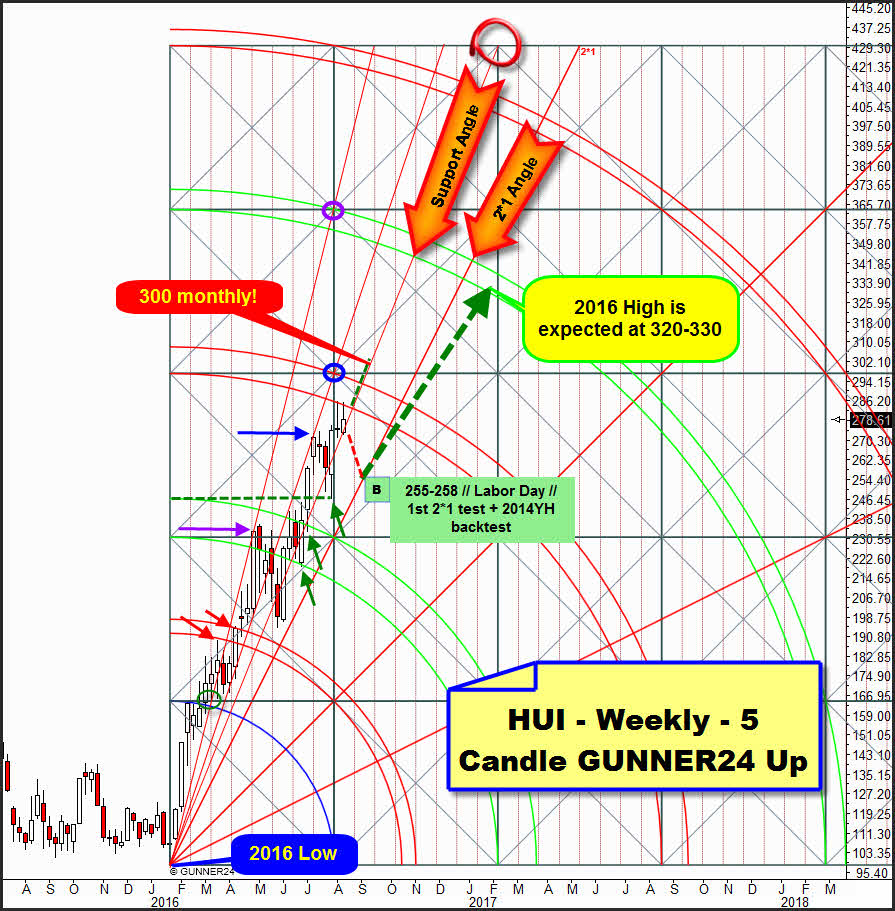 Both August weeks have tested precisely the lower line of the 3rd double arc resistance magnet!

The first August trading week topped indeed at 286.05, the second August trading week experienced its high at 285.63 pts. The highs of the last two candles are going to will pursue now – for other trading methods not recognizable – the downwards directed lower line of the 3rd double arc resistance.

==> As steadied above: The HUI will go to 300 as next important monthly target if the 285 will have been removed on weekly closing base.

In the weekly time frame above, first I emphasized a Gann Angle anchored at the purple and one anchored at the blue circle. After touching these angles at the purple and blue arrows, the HUI had to correct resp. consolidate for a couple of weeks. Whenever we can prove/derive that the market joins the individual GUNNER24 Setups and Magnets with its determined adjustments of the price + time axis we can use and utilize this respective setup for signaling.

I think, in regard to future signaling the Support Angle anchored in the setup above is now as important as both angles that were previously important for the market.

Well, for the week of the Labor Day the 2*1 Angle takes its course exactly at the position of the so far most important Rally Support of the year 2016: At 255-258 HUI points.

==> For the Labor Day trading week, thereby a combined weekly + monthly + yearly rally support exists. ==> For the HUI bull, this is presently a very attractive down magnet.

==> Please don’t go actively short in the Mining Stocks now! Hedging is allowed with HUI-SL 292. Rather reduce now the position size of the till today outperforming Mining Stocks down to a 55%-40% core position! Accomplish some profits in this environment! Don’t bulk up this outperformers before the HUI shows a lush weekly close above 285, because in that case the 300 will have been activated quite certainly coming then. Resp. average up these outperformers again in case of 260, 255-258…

Divest yourself of yet of so far modestly or weak performing Miners in the course of the week, resp. reduce their position sizes drastically. These ones are supposed to correct heftier than the total market. If the Gold Miners indexes correct by a 10%, the Poor Dogs rather fall by a 15%, even by around a 20%-25%... If the Gold Miners correct by a 10%, the Silver Miners would likewise correct lower correspondingly = 15%...

Be a part of our exclusive sworn GUNNER24 Trader Community – now... I try to make you rich with the help of current Gold and Silver Miners bull market!