Welcome back to the first GUNNER24 Forecasts issue after the summer break. Today, I’d like to present a follow-up on the S&P 500 leading index whose current rally is altogether burgeoning the way it was expected to be before the recess. 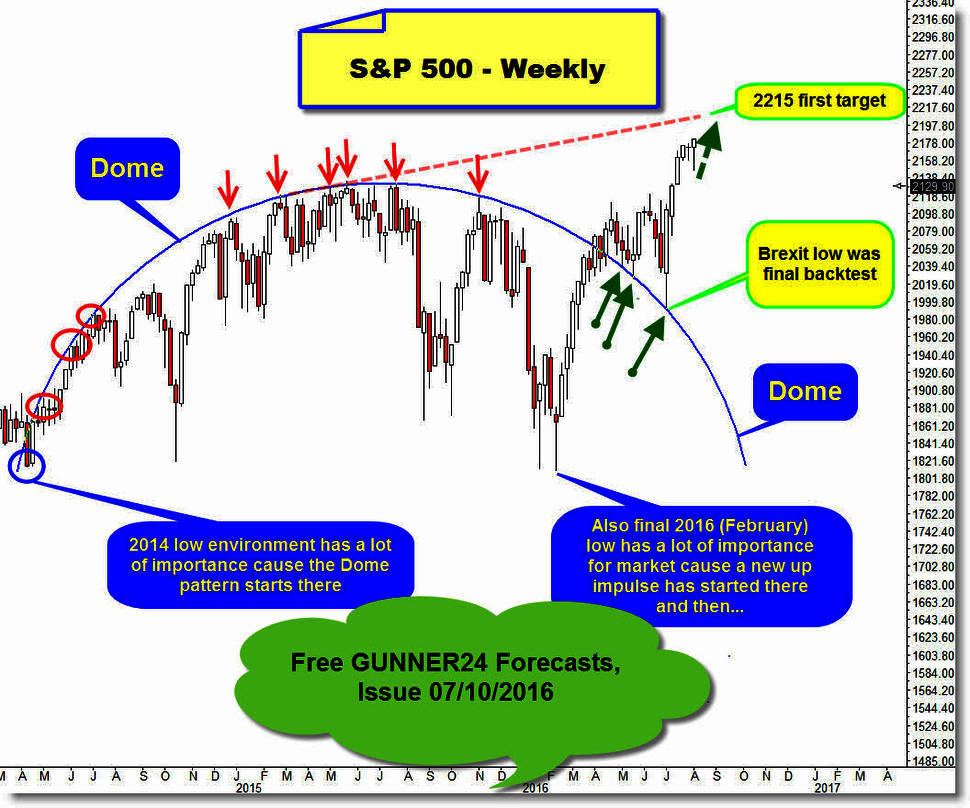 Above, you see the S&P 500 index in the weekly chart. For more than two years, the market had been tinkering with a "Dome". Starting from the final low of the year 2016 in February, the rally led to the tenacious two year dome resistance to succeed to be clearly overcome ultimately, indeed with difficulty.

After the final April 2016 surmounting, the former dome resistance was tested back at weekly lows, all in all three times, in an extraordinarily clean way. For the last time, it was at the reached Brexit low. On these important backtests, please mind the three green arrows.

After the Brexit vote and the Brexit low cemented shortly afterwards, the S&P 500 has been marching upwards quite briskly being able to generate some new alltime-highs in the course of July as well as with last trading week closing.

Tensions that accumulate over one, two or several years because it isn’t possible to overcome important resistances, use to discharge in a correspondingly hefty way at the most after the confirmed final overcoming of such a "major resistance". As analyzed in the GUNNER24 Forecasts on 07/10/2016, that’s why in the S&P 500 we could work on the assumption that the alpha leader will have to head for/work off 2215 index points quickly and swiftly, indeed between the middle to the end of August 2016.

In the chart above, we can perpeuate a red dotted conjunction of important alltime-highs from the year 2015. These red dotted ATH resistance line was and keeps being a most attractive up-magnet for the index intersecting the lower line of the 1st double arc in this important GUNNER24 Weekly Up setup at 2215 index points in the week from August 15 to 19: 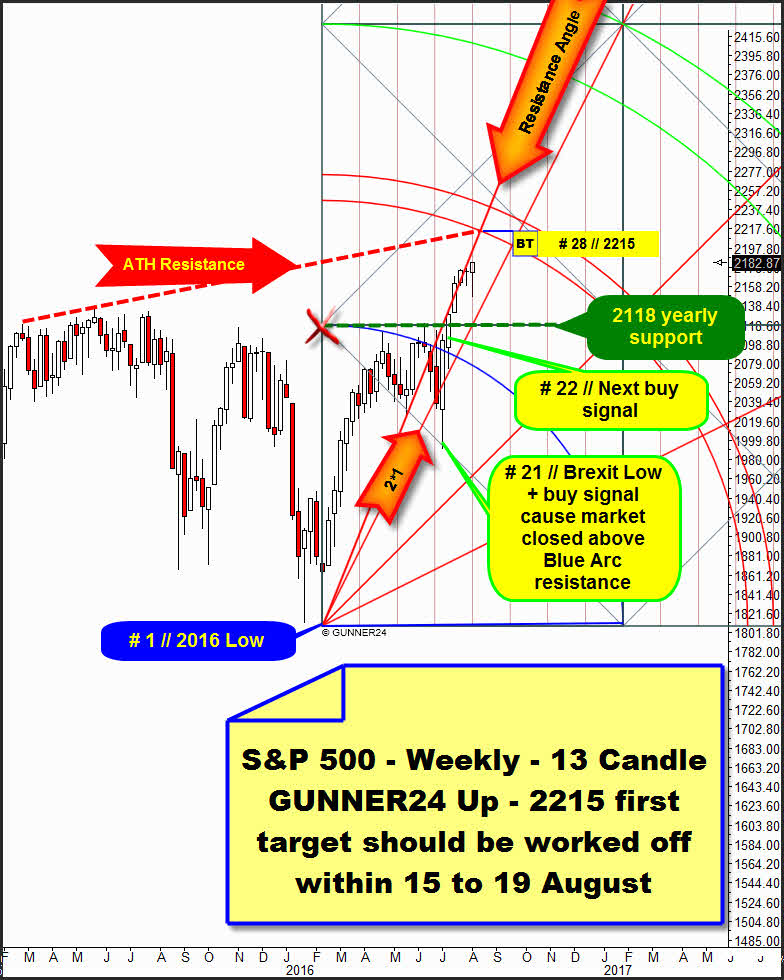 The weekly up setup above starts at the extremely important February 2016 low, the final year low. At the 2016 low being # 1, thereby a new upleg of the overriding bull market begins.

The Brexit low was marked in the 21st week of this new upleg. This turn at the important Fibonacci number 21 marked the start of the latest upleg in the weekly + monthly time frames.

as well as gathering pace at once with the next important GUNNER24 Buy Signal on weekly closing base triggered immediately afterwards ==> # 22 closing significantly above the 2118 first square line resistance.

The rapid overcoming of the Blue Arc (# 21) as well as the 2118 (# 22) first square line was an expression of powerful market force that obviously continued in the subsequent weeks. The last trading week (# 26) closed super strongly at the new 2182.87 alltime-high. The current rally move since the # 21 low doesn’t feature any red candle body.

For 5 weeks, the index has been achieving one higher weekly high after another. In the daily time frame, we can only note soft consolidations… Not even the now extremely important support magnet in the combined monthly + yearly time frame at 2118 was tested back by the index just rudimentarily.

Because of the still dominating inner market strenght there shouldn’t really be cast any doubt on the index to reach and work off the 2215 within the current rally cycle.

==> The 2215 being worked off is likely to happen in the trading week August 15 through 19. In this week, the ATH resistance intersects the lower line of the 1st double arc together with the now shaped weekly Resistance Angle there and then forming a triple up-magnet in the yearly time frame.

Till then, the bulls will be safe according to price and time, the way I see it. By all means, from that point it will be going to be more interesting than so far because now the chance is looming that the Obama government – hand in hand with the Fed a – might/will?/ WILL HAVE TO?!!! hammer a really heavy pre-election slingshot exhaustion move into the chart:

Above, another up setup in the weekly time frame. It starts at the Brexit low, the beginning of an extremely important change, as outlined above in large and length.

The first initial up impulse that started at the Brexit low (# 1) is not finished yet. Next week, the market will be in the 7th week of the Brexit rally that – at least! – should go up to the 2215, as likewise analyzed above. For the rally week # 8 (August 15 through 19), the 2215 will be supposed to be worked off resp. rather positively factored in.

Well, technically, according to the time factor the market should be expected to slate the next important change at the Fib number 8 and after a triple magnet being attained just because inter alia an important ATH resistance is being reached + worked off. Technically - starting from the 2215 triple magnet - it should have to initiate an important correction move, at least having an extended break (2-3 week candles!).

Yet it can’t be overlooked that with the very first test at the Rally Angle anchored in the setup above, at the low of last trading week (# 6) a new, thoroughly energized rally thrust was triggered whose effect so far is the new 2016 high resp. the new ATH, after all…

A coming interest rate hike by the Fed before the US presidential election is to be ruled out completely. So the bulls are given the confidence that the ATH Resistance might be taken within the current rally already. The bulls have got the upper hand, at the latest since the occurrences after the Brexit when the Fed obviously began to back the index at 2000 pts in a manipulative way.

This strong energy thrust triggered by the very first test of the Rally Angle is now permitting this outcome: The rally that had started at the low of # 1 might last 13 or perhaps 14 weeks altogether because the confirmed important Gann Angle Supports can most rarely break down finally before the fourth test, at the earliest!

The Rally Angle might keep on supporting and above all chasing up the market till the 2300 will be reached/worked off before the presidential election.

This realization results in the following demand for action now:

A) The Rally Angle is now proven strong and important market support till the 2215 will be reached. Thus, the best entry into a long-position for next week (# 7) is at 2174-2175. That’s where the Rally aAngle takes its course for next week.