By all means, US Copper and the linked Copper Stocks were clearly high-ranking within the hottest sectors in July. Copper is just dissolving upwards a seven month consolidation period making higher 2017 highs now. Correspondingly above average is the positive reaction of the Copper Stocks as well.

Today’s issue replies to the question how long the current copper bull market might continue, which heights it should have to climb at the minimum resp. where its next interim targets according time and price are supposed to be: 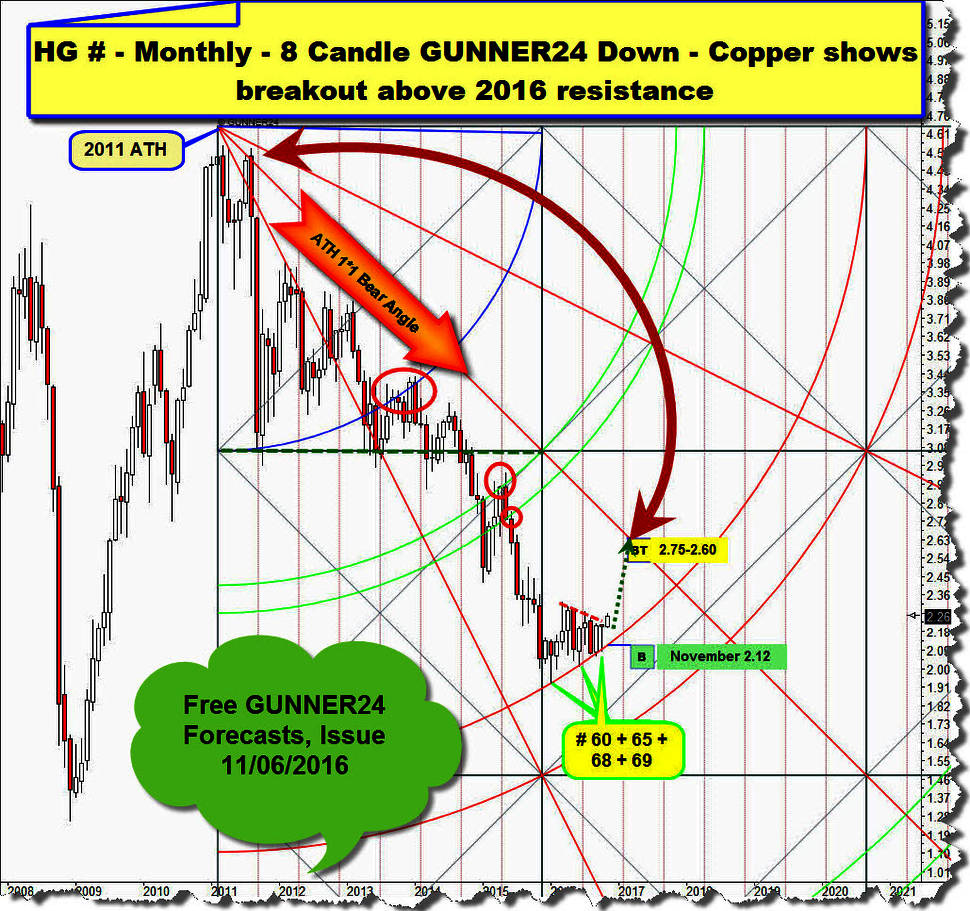 The last game-changing copper buy signal was triggered at the beginning of November 2016, as described and analyzed in-depth in the free GUNNER24 Forecasts, 11/06/2016 "Historical Copper Breakout is due" To look up and refresh why a new bull market begins at the final 2016 low, please click here...

Above, you see the level and forecast of the red metal at the time in the monthly time frame through the GUNNER24 Down Setup view. Coming from the final low of the year 2016 (marked with the # 60 above), copper consolidated through October 2016 (marked with the # 69) in a narrow range above the upper line of the 2nd double arc put out by the monthly 8 Candle down. The very last test of the upper line of the 2nd double arc – being then and till today and far into the future the very strongest!!! support for the current multi-year bull market – at the low of # 69 released the next upleg of the bull that demanded compellingly the following test of the ATH 1*1 Bear Angle.

Therewith, everything important concerning the last forecast is resumed. Let’s go on now with the new prognosis becoming necessary because after a more than 7 month consolidation period that predominantly took place between 2.74 and 2.50, now the metal sallies out to climb new heights: 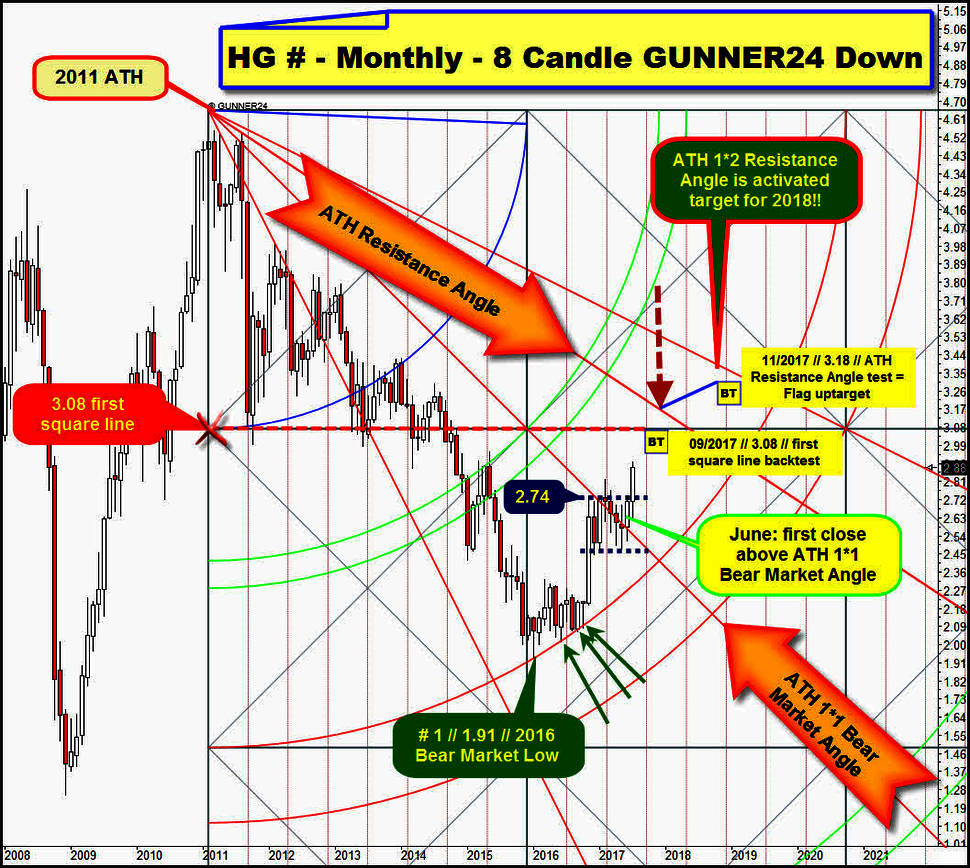 Above, you see the actual copper chart in the monthly time frame including the still most dominating 8 Candle down setup that is being applied at the 2011 alltime-high (ATH). We see that the activated uptarget was worked off as early as in November 216, indeed at the November 2016 top (2.74). That’s where and when also the last consolidation began that comprises 7 resp. 8 candles, depending on the way of counting.

Hence, there was newly a very long period during which the metal had to gather force for a new upleg very narrow underneath its reached bull market high. The pattern that took shape in the course of the year 2017 can really be interpreted only as a so-called "High and Tight Flag", highlighted above with both dashed dark-blue flag limits. Here’s where you’ll find some illuminating, intense explanation on this mega-bullish consolidation pattern = halfway pattern: (http://thepatternsite.com/htf.html).

==> "High and tight flags are the best performing chart pattern in both bull and bear markets" - Thomas Bulkowski. Source: thepatternsite.com/htf.html

Considered from the GUNNER24 Perspective, copper spent the year 2017 by trading around its ATH 1*1 Bear Market Angle, fighting for its final overcoming. This important Gann Angle represents the most important and strongest resistance that proceeds directly from the attained 2011 ATH. By the February close, this important angle was exceeded for the first time on monthly closing base but certainly not overcome crucially, because also the subsequent monthly closings through May 2017 were oriented by the falling ATH 1*1 Bear Market Angle.

Overcoming the ATH 1*1 Bear Market Angle did not take place before the June 2017 high-close. It newly gains confirmation with the current July candle getting fully started, decisively eliminating the flag resistance and compelling new 2017 highs (current 2017 high is at 2.91).

==> The ATH 1*1 Bear Market Angle being overcome on monthly closing base is a mega-bullish event. It means that ALL THE REALLY IMPORTANT RESISTANCES radiating directly from the ATH were finally cracked now. Thereby, US Copper should…!! would have to…!! is supposed to…!! keep on booming at least until mid-2018!! At the minimum!

Let’s go now to the new uptargets according time and price activated recently:

Firstly, I think that the important test of the 3.08 first square line resistance is on the agenda next, at the latest in the course of September 2017. Technically, this nearest important yearly resistance above the present quotations is supposed to be reached and tested swiftly as early as in August 2017, because the markets like to orient themselves by the patterns of the most recent past resp. to remember the previous moves in the current trend. So, since the last bull run into the 2016 top didn’t comprise more than 2, 3 monthly candles, the 3.08 should be worked off very soon.

The way copper performs at the 3.08 upmagnet resistance – of course – keeps secret for the time being, but technically the 3.08 must hardly provide strong resistance, at least on monthly base, since with the ATH 1*1 Bear Market Angle being overcome finally, there are actually some mega-bullish forces being triggered, and I think secondly:

That the ATH Resistance Angle should be reached till 11/2017, or at the latest till 12/2017. At about 3.18. Around there, the final high of the year is supposed to come in. 3.18 through year-end. As well, that’s about the measured uptarget resulting from the bullish High and Tight Flag upwards breal.

==> Next GUNNER24 Main Uptarget for the copper bull is the test of the ATH 1*2 Resistance Angle. This one becomes automatically the uptarget and most attractive upmagnet, because now the ATH 1*1 Bear Market Angle is finally overcome on monthly closing base. Thus 3.40 to 3.20 till summer 2018! 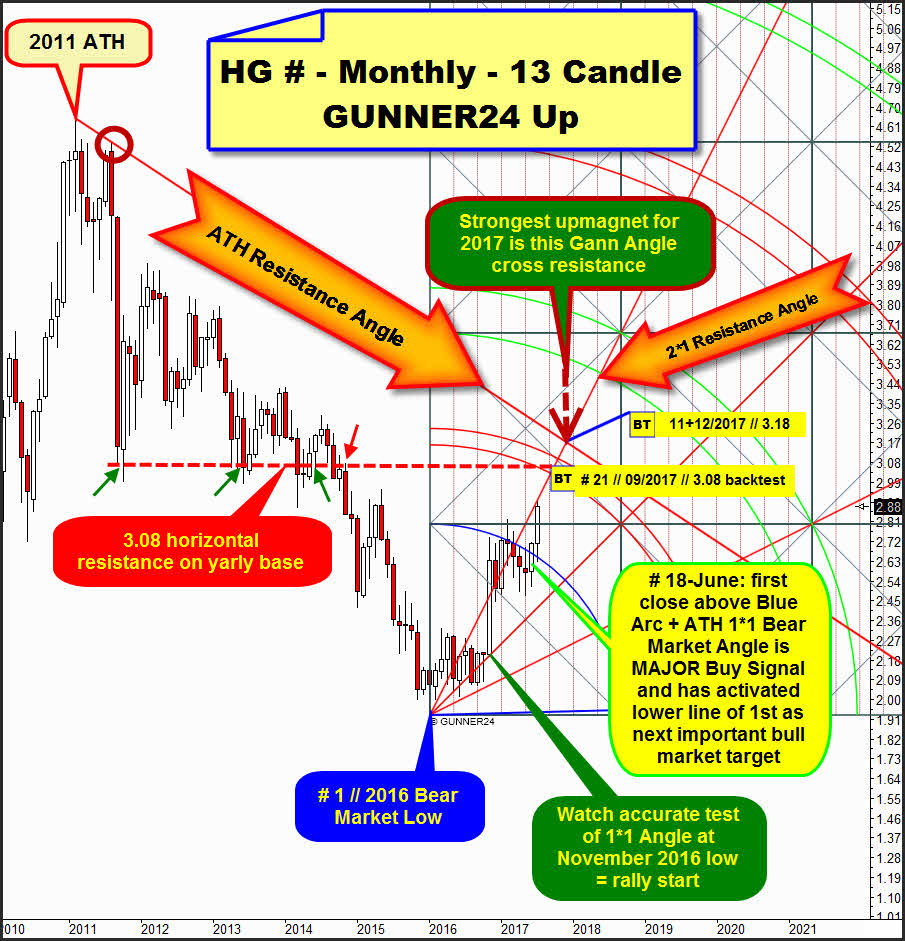 For concluding this important, cause game-changing commodity forecast, let’s still have a look at the bull market that began at the # 1 // 2016 Bear Market Low. I think, at present the 13 Candle GUNNER24 Up Setup positioned in the monthly chart above nails down the copper bull market best…

With the # 18-June close, the very first monthly close above the Blue Arc ensues having been main resistance on monthly closing base for the year 2017. It was a GUNNER24 Buy Signal on monthly base that activated the lower line of the 1st double arc in the current uptrend to be reached.

The second just following GUNNER24 Buy Signal ensues now with the July 2017-high close. The first square line resistance (at 2.79-2.80) is overcome crucially. Thereby, the lower line of the 1st double arc is DOUBLY confirmed as the next important uptarget, and the 2.79-2.80 first square line becomes automatically strong horizontal support on monthly base.

With the coming # 20-August 2017 candle, some new month highs are supposed to be due. Besides, since the # 19-July was able to reach higher 2017 highs thus delivering higher highs than the # 13, the lower line of the 1st should have to be achieved around/in September 2017, 21st month of the bull market.

The # 19-July 2017 high (at 2.91) tested the 2*1 Angle from below. Thereby, both the existence of the 2*1 Angle and its importance as currently strong resistance are confirmed. From this again results that the 2*1 Resistance Angle might be resp. will keep being important resistance also for the further future.

Interestingly – and thus we identified a possibly important future upmagnet – the 2*1 Resistance Angle together with the ATH Resistance Angle, prior worked out as possible uptarget, cement a so-called Gann Angle cross resistance on yearly base at the 3.18 towards the year-end 2017.

==> The most attracting copper upmagnet resistance for the rest of the year 2017 is at about 3.18!

==> The Gentleman`s Entry into new long-positions would be a classical backtest of the upper High and Tight Flag limit at about 2.75! Yet, owing to the identified present trend force, such backtest within the first two trading weeks in August seems to me very doubtful. That’s why at 2.80-2.79 = first square line support in the monthly 13 Candle up is presumed to be the most logical entry into new copper longs.

After nearly 2 years I’ll give me permission yet again to go into the sun with my family for a lengthy period in order to unwind, relax and - as I hope – recharge my battery completely.