From the last free gold analysis two more weeks have gone by, gold passing mainly in the correction mode. These last two weeks corrected the preceding 6 week rise that indeed ended in a buy signal in the weekly time frame because the Blue Arc Resistance on weekly base was overcome finally.

Thereby, both uptargets generated by this buy signal – the minimum uptarget of 1402 and the main target of 1430 - keep being valid: 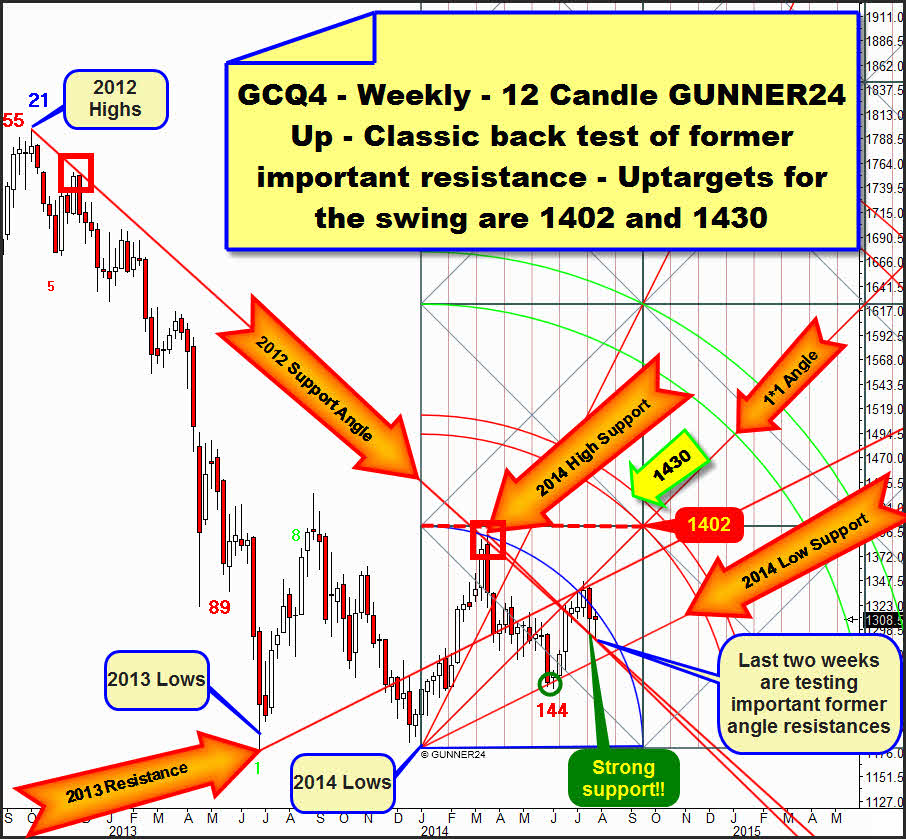 The 12 candle up in the weekly time frame above is forecasting the important future magnets and targets deriving from the first initial impulse that starts from the low of 12/31/2013.

The current up-move started 8 weeks ago at the 2014 Low Support Angle (= 1*2 Angle) after the 144th week of the correction in the secular bull market had cemented an important higher low. So, the up-move has lasted 8 weeks so far. 6 weeks up, followed by a 2 week correction. According to the body of rules thereby the next important top in gold is to be expected earliest by the end of August = 13th week of the up-move.

This top should work off one of both targets, the 1402 = first square line resistance respectively perhaps even the first double arc resistance = main target at 1430.

At the moment, it is thoroughly looking as if the 1435 will be attained before another multi week correction (lasting about 5 weeks) respectively even a new test of the currently most important support region at 1180-1200 can follow.

Not before a significant weekly close above the 1st double arc gold will be out of the woods. Just then we will have the final confirmation that the metal is in the first new upleg of the secular bull-market that will top out in 2019.

In the chart above, I just emphasized 5 currently most important factors of influence to the present and future gold course. I’m talking about the 5 Gann Angles:

2013 Resistance = springs from the absolute correction low of the year 2013.

2014 Low Support = springs from the absolute 12/31/2013 correction low thus having effect to the 2014 course. It gave support for 2014. Proof: In the 144th week of the whole correction since the September 2011 all-time high an important higher weekly low was produced there. The 2014 Low Support Angle is thereby technically the weekly main support for the rest of 2014. Only if this angle falls, the 1180-1200 will be targeted again.

The 1*1 Angle likewise results from the 12/31/2013 correction low, thus also having effect to the 2014 course, currently giving resistance for 2014. Proof: Three weeks ago, the 1*1 Angle intersected the 2013 Resistance Angle thus forming a Gann Angle cross resistance and forcing gold into the correction being just in course for the last two weeks.

I call it a correction because…:

…clearly and visible for all of us, the lows of the last two week candles test back only the very, very most important Gann Angle anchored in the chart above: The 2012 Support Angle.

To depict it again… this angle was a multi-year resistance, for 2012, 2013 and for 2014! Adding together the weeks this Gann Angle put up resistance it mounts up to 90 in all! That’s very near to the Fib number 89! …till it could be overcome finally 5 weeks ago.

See that mighty signal gold turned in! After 90 weeks of resistance the angle was overcome ==>

Thereby mutating the former resistance to become a support. The 2012 Resistance Angle turns into the 2012 Support Angle. And what do the markets do after having taken an important resistance…???!!! They test back this erstwhile resistance.

Nothing else can the move of the last two weeks signify but a back test of a multi-year resistance.

The icing on the cake:

From the high of the year 2014 springs the 2014 High Support Angle. It’s the case of a 1*1 Angle. This angle was likewise a resistance until 6 weeks ago. The most important angle resistance of the year 2014 it was just because it started out from an absolute year high…

Exactly 5 weeks ago, also this important resistance was skipped over. Therewith, here again the energy state of the angle turns from resistance to support.

==> Together with the 2013 Support Angle, now the 2014 High Support is forming an important cross angle support that at the moment or for 2 weeks has been tested back by gold at the respective weekly lows.

Let’s give gold a little time margin with this back-test. I think 1, 2 or even 3 weeks of back-test can only be sane because it should be the ideal springboard for the next upleg!! 1402 continues the minimum target for the current weekly upswing. There, at 1402 the 1*1 Angle = most important resistance for the rest of 2014 intersects the first square line resistance and the lower line of the first double arc by the middle of September 2014!

The currently valid monthly up setup we can apply at the absolute correction low of the year 2013 is signaling that the correction came to an end with the low of Thursday at 1287.50. Perhaps next week it will come again to a small lower daily low, until next Thursday – the end of July – maybe at 1284. That is what it will be supposed to have been about the back testing of important Gann Angles: 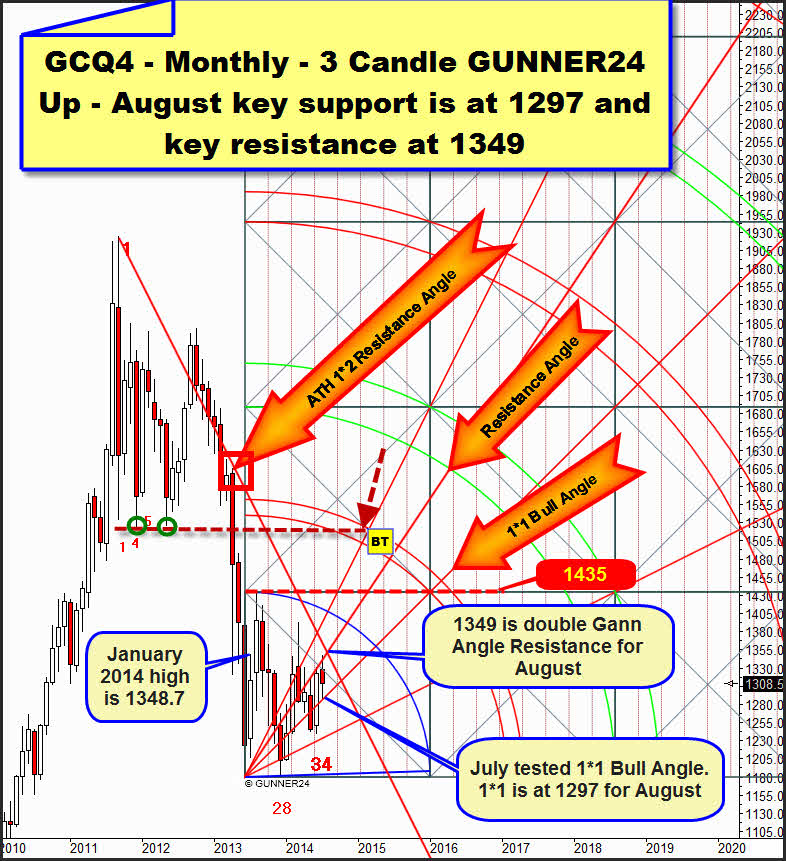 For also in the monthly time frame for me it’s unequivocal that a Gann Angle back-test takes/took place. The low of Thursday was on the important 1*1 Bull Angle, to a T. Above that, gold is to be traded bullish and below it bearish. This 1*1 Bull Angle was re-conquered in June 2014. It’s but logical that July has to test back here as well.

Since from the Thursday low to the Friday close a 20$ rally was running, the back-test of the important 1*1 Bull Angle seems to have proceeded successfully…

The weekly forecast above is throwing up the 1402 as the minimum target, after all. The weekly main uptarget of 1430 is plainly corresponding with the 1435 first square line resistance in the monthly setup however!

==> To reach the 1402 respectively the 1430 until mid-September, an important resistance will have to be taken finally. The ATH 1*2 Resistance Angle. It’s the matter of a multiple year resistance that got on the whole tragedy in the end. At the red square, this ATH 1*2 Resistance Angle decided during the high of the month of April 2013 to have had one’s fill of the consolidation after the 2011 all-time high. The last touch with the angle led to the waterfall that ended up 2 candles later at the June 2013 low.

For August, the ATH 1*2 Resistance Angle takes its course at 1349 forming there, with the Resistance Angle, an important double Gann Angle resistance. Together with the natural July 2013 high resistance environment, thereby the 1350 mark is the resistance that decides about the weal and woe of the gold bulls and gold bears. It has a powerful influence on gold.

If gold cracks the 1350 on weekly closing base… the weekly GUNNER24 Forecast telegraphs this occurrence soon… a short covering rally will be expected that packs a punch! As mentioned, minimum target 1402, but I mean that the 1435 are much more likely in that case. The first square line resistance is forming the high of the trading range that produced the first 3 candle initial up impulse, starting from the June 2013 low. In chart-technical terms, another approach run/test of a resistance is nothing unusual, just too normal.

The next important buy trigger gold would have ahead after the final overcoming of the 1350 is the 1435 horizontal resistance. A clear monthly close above 1435 (about 1445 and higher) will activate the first double arc as the next higher target = huge resistance. Working off and reaching the first double arc resistance would only conform to the chart-technically allowed respectively often necessary test of the important 1522-horizontal – now the very strongest gold resistance.

Is it possible that the 1522 resistance will be reached even until year-end?

The energy that emerges after the cyclic low at the half-year may often be spectacular. August and September are mostly the best gold months. I think I discern this: If the 1350 is taken upwards within the next 3 weeks, it will have to come to a large-scale short covering, whereby the 1435 being likely to be worked off. If this one is taken on weekly closing base till the end of September/beginning of October, the 1522 will be supposed to be just a question of a couple of weeks to be worked off.

==> On the other hand, the bulls should not expect too much if the bears succeed in maintaining gold beneath 1322 for 3 more complete weeks. In that case, the final high of the year 2014 might be at the 1400 mark before from there another test of the 1200 mark is likely to start.