One of our traders asked me in the course of the week to outline in more detail a topic I touched on just briefly in the last issue: The important 2350 bull market uptarget of the S&P 500 related to the 2160 point crossroad. 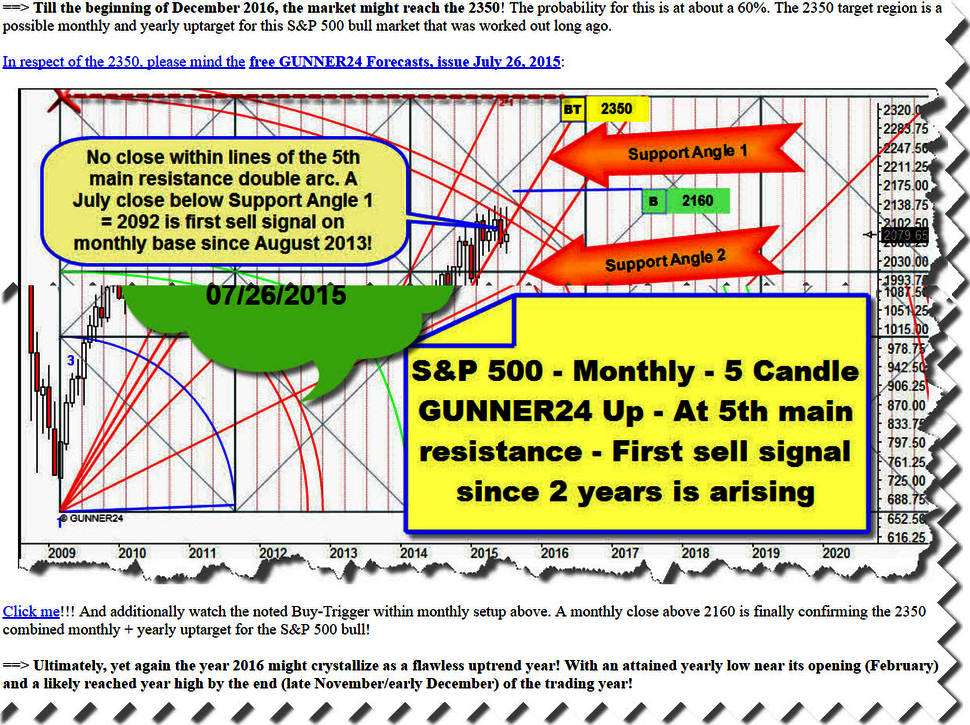 In the first depiction above, so to speak as a condensed entry into the subject you’ll find my states of last Sunday on the 2350 and 2160 as well as a partial section of the off-topic important GUNNER24 Up Setup in the monthly time frame.

The 2160 threshold is an extremely important trigger for the S&P 500 in the monthly time frame. For in case of being overcome on monthly closing base, the 2350 pts will compellingly have to be tried resp. ultimately worked off till December 2016.

It was not by accident that the S&P 500 fell by more than 10 points after-market, after the official Friday close (2161.73). The news that was appropriate for this was the beginning coup attempt in Turkey. In the end, it doesn’t matter at all which whatever released the rejection from the 2160. Anyway, the index would have rebounded from the 2160 resistance on Monday at latests– if just a bag of rice had fallen down in China…

==> The 2160 is the most important resistance for the month of July 2016. The power of this resistance permits A) most likely the bull-run of the last 13 trading days – Fib number = turning number – came to an end at the final Friday high brought in at 2169.05. Correspondingly, B) a 40-60 point pullback should come true now. The expected pullback might last 8 to 10 trading days: 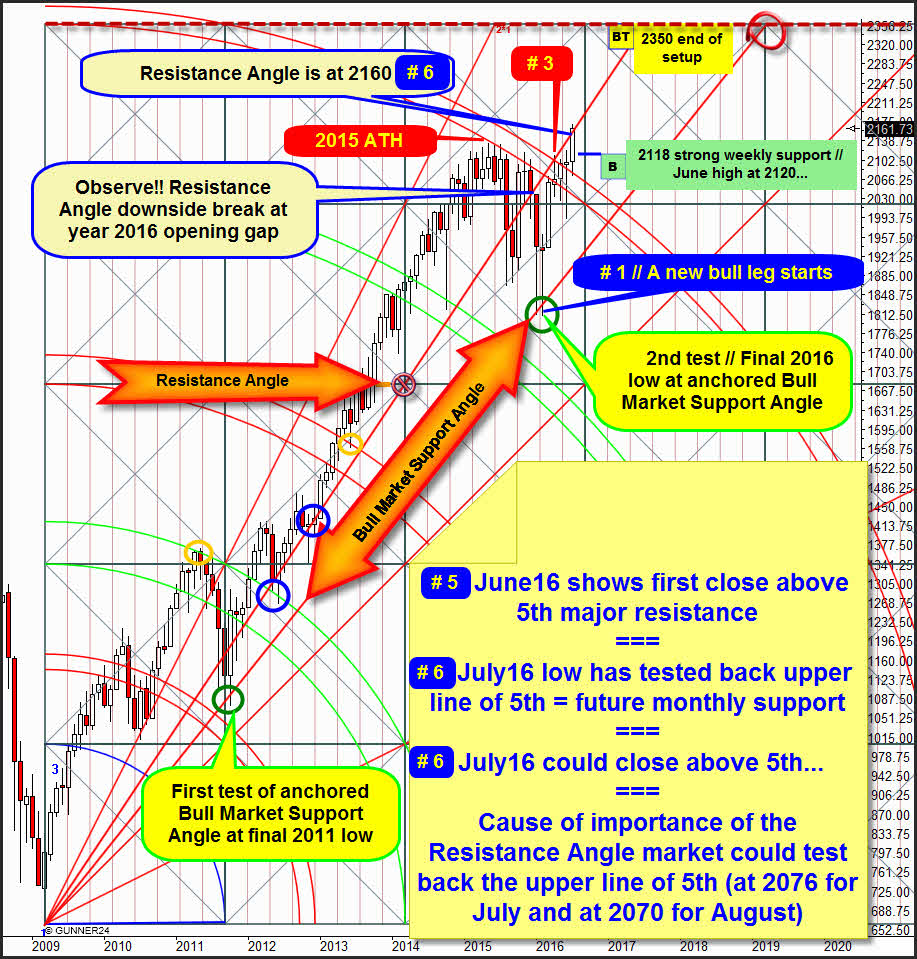 Above, you see the currently determining monthly up setup for the S&P 500. It starts at the final 2009 bear low measuring up 5 candles initial up impulse.

I’d like to begin the detailed analysis and the forecast at the 2015 alltime-high (ATH) = 2015 ATH. Just like the many, many other subsequent monthly highs of the last correction period, it was caused by the MAJOR RESISTANCE of the 5th double arc.

Technically, in a GUNNER24 Up Setup a 5th double arc being worked off is nearly always a sign that something important ends since the main target was reached. Actually, the trend would have to change at the 5th double arc mutating from being bull to becoming bear…

In the case of the S&P 500 bull market, it only came to a rather "weak" correction move in terms of the price factor, released by the main resistance of the 5th double arc. In fact the last correction according price proceeded feebly because not even the 4th double arc support environment succeeded to be tested back before the bull market gathered pace again at the final price low of the correction and the February 2016 low = # 1!

However, from the time factor point of view, the 5th double arc main resistance delivered insurmountable resistance over 14-15 months before it could scarcely be overcome for the first time on monthly closing base with the June 2016 candle.

==> Thus until the final 2016 low, in terms of price the most recent feeble price correction fulfills to its full extent the conditions of a bear market with average duration. This is mostly about 12 to 18 months in the US stock markets.

==> The last correction period came to its final price low at the second – pretty clean – test of the anchored Bull Market Support Angle. For the first time, it was reached at the final year low 2011 (green oval) and newly at the January 2016 plus the February 2016 lows.

An interim conclusion: At the final 2016 low, the obviously existing Bull Market Support Angle, therewith a new sustainable bull market upleg began. It started at # 1, and it was to be closed in June 2016 = # 5 for the first time above the 5th double arc main resistance of the bull market. The current July 2016 candle = # 6 is now keenly diverging from the 5th double arc main resistance! Please mind inter alia the pretty clean backtest of the upper line of the 5th main resistance at the low of the current # 6 July 2016 candle.

Next important uptarget of this bull market: With the current July # 6 course, the 5th main resistance seems to be overcome of course, correspondingly generating the next important buy signal in the monthly time frame. With the 2161.73, optically the index is already trading far above the 5th main resistance. A July 2016 close here at 2160 would overcome the 5th finally thus activating the next higher possible uptarget for this bull market.

Well…, if the 2350 is reached till December 2016/January 2017, then and there the entire bull market will be very likely to intend to finish having to start a new long-lasting bear market.

The current importance of the 2160 threshold:

For the current July, the 2160 is the most important resistance. The 2160 is defined by an extremely dominant angle currently exerting resistance function.

At the crossed-out circle, this "Resistance Angle" can be anchored at the transition from one square to the other. In 2012 and 2013, it was important monthly Support Angle at the blue ovals before it was finally broken downwards for the last time by the enormously signal-strong opening gap on yearly base (!!) with the transition from 2015 to 2016

Thereby, the Resistance Angle is exerting now resistance function in the yearly time frame. On Friday, the market may newly have tested back this yearly resistance negatively, as well as it did already at the top of # 3, by the way…

2160 is resistance on yearly base for July 2016. In mere theory, this resistance is strong enough to be able to force the market to another backtest of the upper line of the 5th double arc main support.

Now, the Resistance Angle may set back the S&P 500 in the short term, at the extreme down to a possible backtest of the upper line of the 5th main support (at 2076 for July and at 2070 for August).

==> If however much more money is being retracted out of the Euro space again because of the failed Turkey putsch attempt, circumstance like that are supposed to fuel the momentum-strong breakout move of the US stock markets once more. As a result, technically the important and strong yearly resistance shown by the Resistance Angle should be overcome soon and within course of July 2016!

That’s why my advice is this: Go likewise all-in-long in the S&P 500 in case of a July 2016 close above the 2160 because normally, the Resistance Angle being overcome on monthly closing base would have to trigger the next strong upwards thrust exhausting at the earliest after the 2215 first uptarget being reached and worked off.

On the recently activated weekly 2215 first uptarget, read up again all the important items in this issue: