Time’s wearing out unstoppably – it’s running out!! The question is when will the major US stock markets crack down? When will they join those many European stock indexes the majority of which are in the new downtrend on daily base already thereby having swung into the long-expected correction mode in the weekly time frame as well?

I can’t tell exactly to a day. All I’ve got is a timing ribbon.

What always attracts the attention of the Big Boys is the Bradley Siderograph developed in the 1940s by Garth Allen – better known as Donald Bradley – in order to forecast the financial markets (bonds, commodities, stocks). He assigned numerical values to certain geocentric and heliocentric planetary constellations for every day, and the sum is the geocentric or heliocentric Bradley Siderograph or Bradley Index: 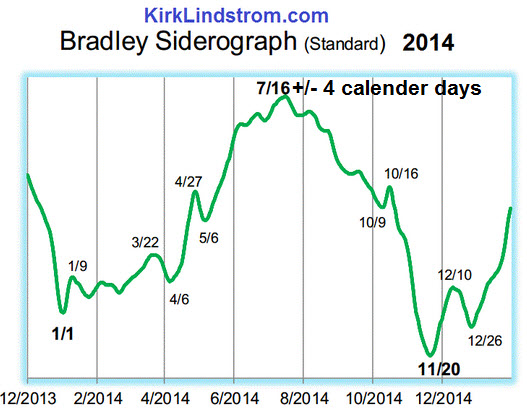 The siderograph is now forecasting a significant turn for the US markets. Since the forecast for 2014 – actually a continual rise without large corrections - widely came true so far, we’ll have to play for keeps the timing ribbon for the year-high 2014 expected by the Bradley Siderograph – July 12 to 20. We will, especially regarding the fact that the European indexes have been turning and tanking and in the higher time frames many serious negative divergences are newly to be stated at the controlling technical indicators.

GUNNER24 Timing for the turn and the confirmation of the beginning correction:

The current year-highs in the majors are too early in July to be possibly the final high already, according to Bradley respectively in terms of time. Considered in terms of price, the current July highs might have represented yet the end of the road however. Though, the time is signaling that 07/03 was too early for the markets to form the final turning high.

What I’m expecting now to happen the next 1-15 trading days is the scenario as follows:

Beginning on Monday, the three mentioned major indexes will newly run up, then testing gain the highs of 07/03 respectively 07/07 within 1-15 trading days. When this test ends up, the indexes will start their respective correction. Thus, at the earliest with the Monday high tomorrow the test of the early July highs may be finished. 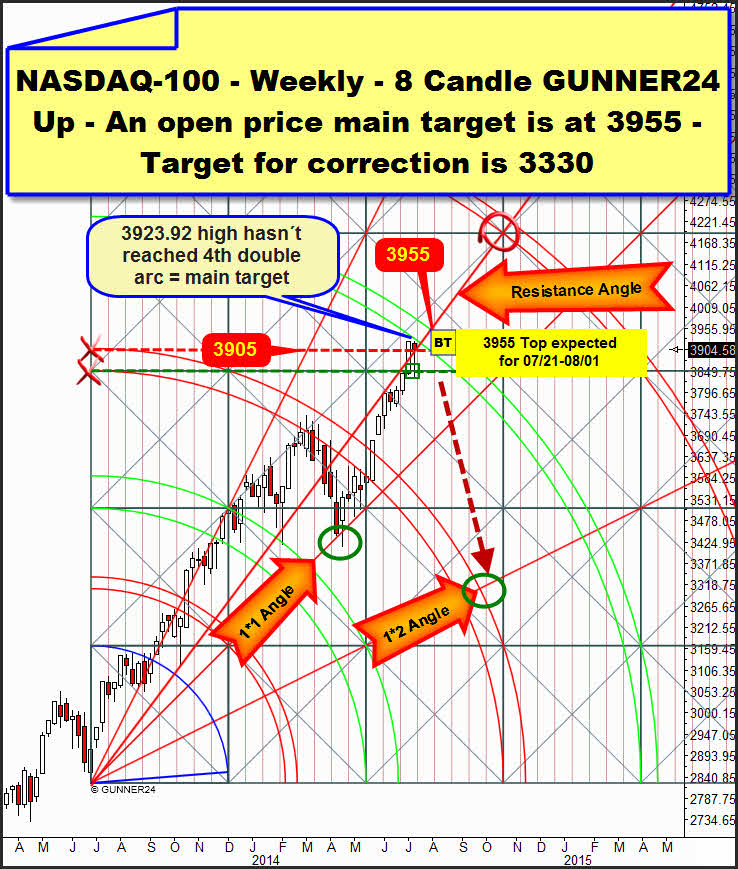 For us, only this GUNNER24 Setup should keep being the price and timing indicator for the expected correction on weekly base – the weekly 8 Candle GUNNER24 Up Setup of the NASDAQ-100 index – analyzed already here and here. It will show us when the final correction started in the major US indexes. Not before this setup indicates that the 10-15% correction is underway, going short in the short and medium terms will be possible with a relatively low risk.

The targets in price for the index = major targets for the index are A) 3905 = weekly GUNNER24 Horizontal Resistance, see above. And B) the 3955 = upper line of the 4th double arc, see above, which is at the same time the 78.6% Fibonacci Retracement from the 04/2000 all-time high. The profound analysis on the way both major targets were derived from you’ll find in the GUNNER24 Forecasts of 06/22/2014.

With the high of 07/07 at 3923.92 the lower 3905 main target is obviously worked off. The price has reached a main target thereby being allowed to turn, starting from the 07/07 top. Thus, the 3923.92 may have been the final price top of the whole tenacious up-move of this year. However, with the mentioned top, the lower line of the 4th double arc is NOT YET worked off. This line has to be reached respectively touched. Without working off this trigger according time the index cannot start to decline significantly.

==> Sometime during the next 5 trading days, at the lower line of the 4th and at a lower high the correction move towards the 3300 will start.

==> In the course of the next 5 trading days the index will overcome the highs of 07/07 being most likely to work off then – from 07/21 to 08/01- the next higher main target, the upper line of the 4th and the 3955. Not before that, the index will begin to fall. This is the scenario I clearly prefer. Certainly, last week closed in a minus, but the fact that the main target was held at 3905 with the weekly close is a hint for more up!

Besides, the 76.8% retracement from the all-time high seems to me an obvious price target. The Big Boys are simply eying this important magnet probably wanting to see the 78.6% retracement in this wave yet.

==> After overcoming the 3923.92, somewhere between 3930 and 3954 the index will turn down. It’s also possible since the space, i.e. any price between the lines of the 4th double arc is naturally always a strong resistance area as well.

==> Till mid-August, the index will take the powerful resistance of the 4th double arc including 3955 on weekly closing base. In this case, until the year-end 2014 only minimum corrections to maximally -5% will be supposed to be on the agenda… Whew!

Attention! Short engagements are not to be gone in before the index produces a weekly reversal candle at the 4th double arc environment. This is normally the final confirmation that the 4th double arc resistance is strong enough to force the market into the technically required 10-15% correction move! The reversal candle is imperatively to be waited for, just in regard to the fact that last Thursday the low of the week before last was bought heftily again. 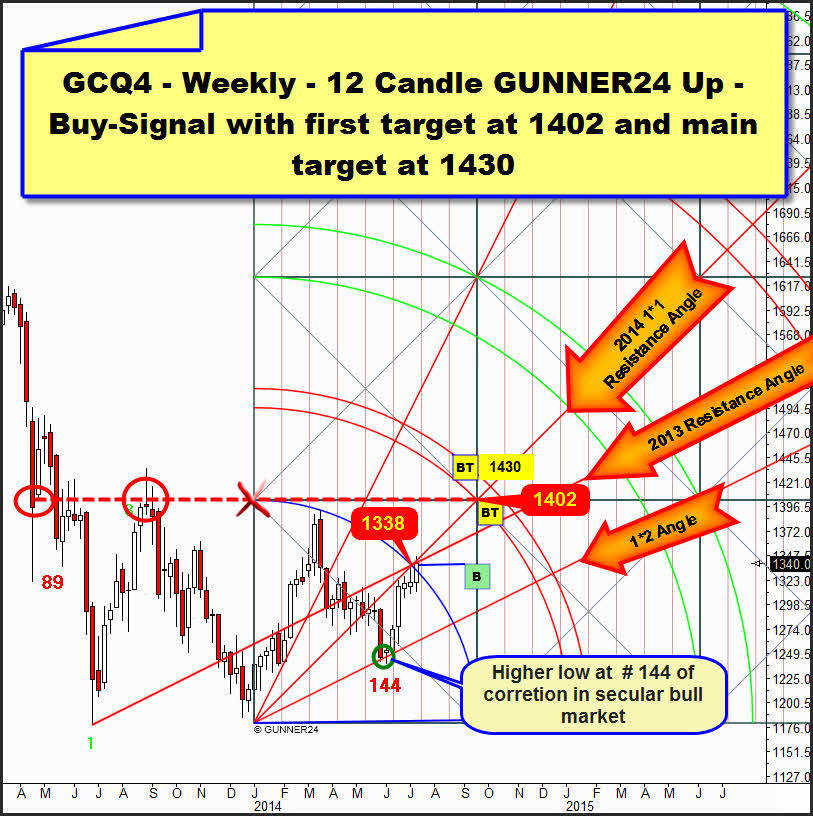 The 12 candle up in the weekly time frame above is forecasting the important future magnets and targets deriving from the first initial impulse that starts from the low of 12/31/2013.

The current up-move started 6 weeks ago at the 1*2 Angle after the 144th week of the correction in the secular bull market had cemented an important higher low. So, the up-move has lasted 6 weeks so far. According to the body of rules thereby the next important top in gold is to be expected by the end of July = 8th week of the up-move.

The last week candle succeeded in closing clearly above the resistance of the Blue Arc. It’s a new buy signal that in the medium term will primarily activate the first square line resistance at 1402. In the further course, also the 1st double arc resistance at 1430 is likely to be worked off. Not before a significant weekly close above the 1st double arc gold will be out of the woods. Just then we will have the final confirmation that the metal is in the first new up-eg of the secular bull-market that will top out in 2019.

All 6 weeks of the present upswing are showing "green" candle bodies. It’s a strong upleg, just like a very first upleg in a new powerful bull market upleg is supposed to start.

The last 4 candles are clearly orienting themselves by the 1*1 Gann Angle of the setup. I call it "2014 1*1 Resistance Angle" because the up-leg has not yet succeeded in closing above. The last weekly highs were made exactly respectively almost exactly at this resistance. So far, the 2014 1*1 Resistance Angle has not shown any fits to let the price heftily rebound downwards. It is rather showing a magnetic effect. Week by week, gold has been following upwards marking its weekly high at the angle without rebounding there. Corresponding to the Fib count, this condition shouldn’t/may not change before some day during the week after next = in the 8th week…

Ergo, gold will be attracted respectively dragged up at least 5 more trading days by the 2014 1*1 Resistance Angle. Not before Monday after next (when the current swing will be in week # 8) the angle is "allowed" to begin rejecting the metal.

Interesting is the cross resistance formed by the 2014 1*1 Resistance Angle together with the 2013 1*1 Resistance Angle and the Blue Arc, narrowly beneath the current weekly closing at 1338. The cross resistance is overcome by the current weekly 1340 close. Thoroughly conspicuous is that the 1338 was still taken upwards at the late Friday trading. At an actually very sluggish and extremely boring day finally such an important signal on weekly base succeeded – strange!

Above all it is because the 1340 even took the important resistance of the Blue Arc on weekly closing base. This strong close in gold is extremely trend-setting, I think. Gold is supposed to go up. It will as follows: 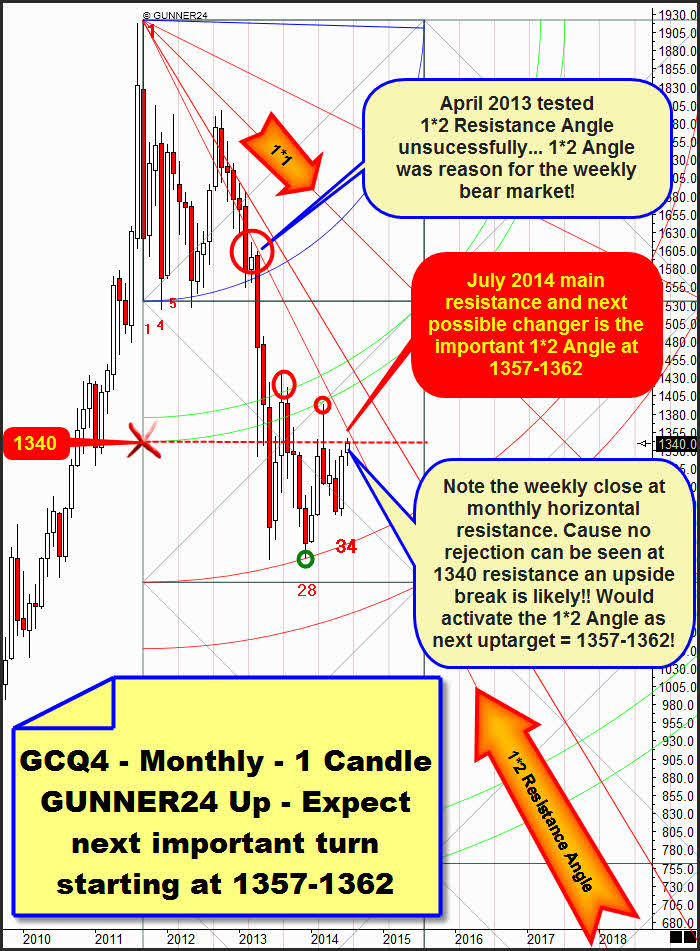 Let’s switch into the monthly time frame. The 1 candle monthly down is showing us that the 1340 is an extremely important monthly resistance.

Gold found its second bottom in the 28th month of the correction, you know (December 2013), exactly at the upper line of the 2nd double arc. Since then it has been marching up stopping exactly at an important resistance magnet with the Friday close. It closed at the 1340 horizontal resistance that starts from the intersection point of the lower line of the 1st double arc with the beginning of the setup.

Well, trading, respectively investing respectively trend recognition normally always bears on the markets’ performance at important resistances and supports respectively Gann and GUNNER24 Magnets, you know. Given that gold settled exactly at 1340, I mean it really feels attracted by this combined weekly and monthly GUNNER24 Magnet, above all not showing any rebound energy respectively rejection from this magnet, it is surely willing to take/break this resistance upwards.

By this comportment and since the weekly swing mustn’t mark the next important high before the week after next – at the earliest – it is preparing the future break of the 1340 upwards.

A look at the history of the 1*2 Gann Angle is sufficient to assess what a hardship is threatening there after working off. The unsuccessful test of the 1*2 Resistance Angle in April 2013 was the trigger for the whole mess that lead gold into the June and December 2013 correction lows. The angle generated such a lot of negative energy at the 04/2013 high so that even monstrous supports broke like twigs, taking the upper line of the 2nd to set bounds to this down-energy boost…

So, after working off the 1357-1362 there at the 1*2 Resistance Angle July is technically supposed to find its top then turning heftily downwards to test back in succession the important 1312-1302 monthly GUNNER24 Support Magnets in August. If this course does not happen as described it will be a strong surprise. Too powerful should be the resistance function of the 1*2 Gann Angle yet in July 2014.

…if July 2014 really does close significantly above the 1*2 Resistance Angle = about 1372, the 1*1 Gann Angle in the setup above will be activated as main uptarget. The 1550 region at the 1*1 Angle will be expected to be headed for very quickly = maybe in February 2015 in that case.

A monthly close above the 1*2 Resistance Angle is a powerful buy signal on monthly base. Taken the appearance of the trend situation however, I don’t reckon with this buy signal before September 2014, at the earliest.