Now it’s done, ultimately. After just endless dogged pushing and shoving to and fro, the two most important US stock markets decided to reach new alltime highs (ATH) in 2016 as well. The S&P 500 as supposed to climb up to another ATH as early as on Monday. The Dow Jones should be able to compel its new ATH within the next 5 trading days.

With almost an 100% of certainty, the Wilshire 5000 (WLSH) and the MidCaps (MID) will follow with new ATHs still in July. Whether the two most important tech-indexes Nasdaq Composite, NASDAQ-100 and the SmallCaps (Russel 2000 = RUT) will be able to follow suit this summer is still in the stars. Let’s wait and see.

From the fundamental point of view I understand quite well why some new ATHs will have to come up now in the US. After the Brexit, the cheap money is flowing out of the EU stock markets now, powerfully entering into the US, the US$ and precious metals as well. Safe haven reason and things like that. Yet all this stuff doesn’t go well together somehow.

While the US indexes can seemingly reach new ATHs, at least partially, the important EU stock indexes are still in the completely confirmed correction resp. in the obvious bear market. The British leading index FTSE 100 seems to be willing to cast its lot with the Americans. Here, too, a new ATH within the coming months is impending.

Is the EU really down and out? If so, how can the leading US indexes attain new ATHs, how long can such an importance divergence between two likewise important economic zones persist?

Will the EU stock markets recuperate soon cause the Americans have to go up compellingly? Or do the leading US indexes cheer their last Hurray before they crash completely wanting/having to join the EU into the abyss? There are significant differences between the respective important US stock markets regarding their signaling situation, after all. Questions upon questions, divergences upon divergences.

To dissolve at least some of these important questions, I chose to analyze the S&P 500 today because on the one hand, I wanted to comprehend why and how come everything the way it is now...

…and on the other hand to get a better feeling for where this leading index wants to go now = price and time targets. What kind of imagination and plans for the next weeks and months are involved.

==> The starting point for my considerations was when the executed Brexit and the subsequently attained Brexit low in the S&P 500 flipped a switch because an important changing point was reached. From sideways up to extremely bullish.

==> Since the Brexit and the shortly afterwards cemented Brexit low, the S&P 500 has been marching up hard being consequently forced to make a new ATH as early as on Monday after all.

==> So, the Brexit low must have reached an outstanding important support magnet that has driven the market into a new and important bull market leg: 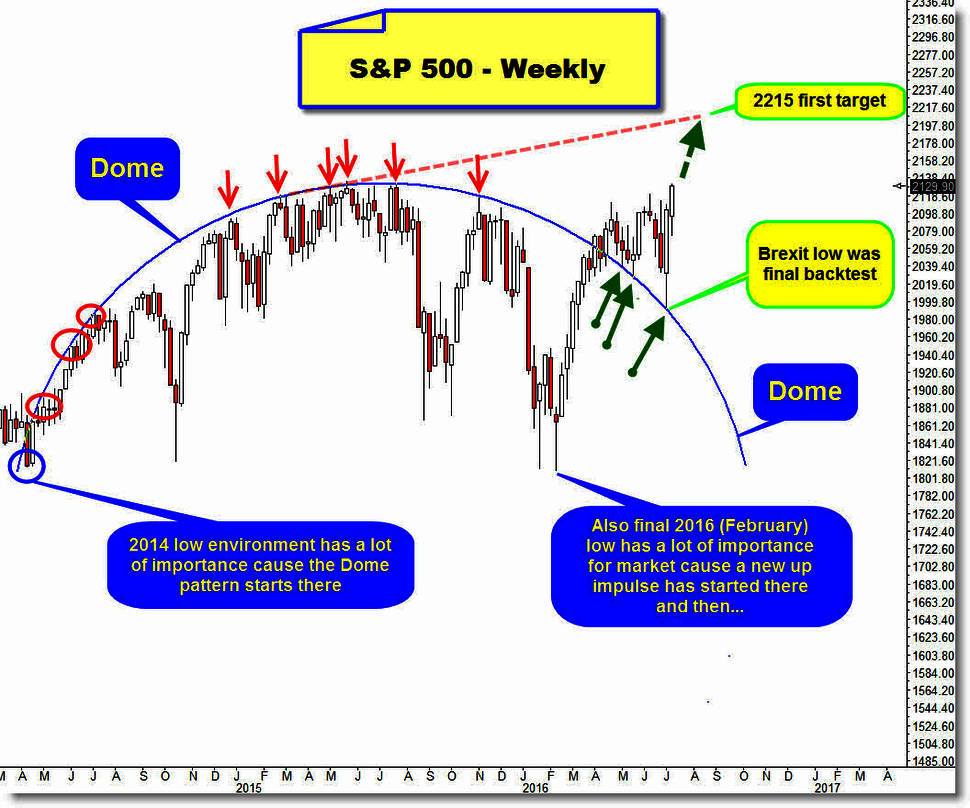 Above, you see the S&P 500 in the weekly chart. I think that near the final low 2014, the market began shaping a long-lasting elliptic resistance = Dome that could be overcome on weekly closing base for the first time in April 2016.

Thereby, the final 2014 lows have got some importance for the US markets which I hadn’t really been aware of heretofore.

==> Furthermore, the final low of the year 2016 in the S&P 500 (reached in February 2016) must!! likewise have enormous importance for the US markets. Anyhow, the rally that had started in February 2016 led again to the Dome resistance – that had lasted more than 2 complete years – to be overcome, indeed tenaciously but anyway rather clearly.

Undoubtedly, after having overcome finally in April 2016 the Dome resistance the Dome was tested back most cleanly altogether three times during week lows. The last time it happened was the reached Brexit low. About this important backtests, please mind the three green arrows.

From this extraordinarily accurate backtest of the Dome, the current upmove started leading + having to lead now compellingly to new ATHs.

Thus, the market struggled with the Dome to overcome for years. It was 2 years – till the Brexit low. By this low being reached, the backtesting phase of the Dome is closed as some new ATHs will be pending soon. The tensions forming during one, two or more years because important resistances cannot be overcome mostly discharge in a correspondingly hefty way after such a "major resistance" being overcome.

Afterwards, either the price pops up vehemently and rapidly or the new uptrend proceeds rather slowly but lasts the longer in respect of the time.

I think the S&P 500 is subsequently going to reach the 2215 pts. First, Fast & Furious, till about end of August! The Brexit low clearly seems to have triggered a new powerful up impulse in the overall bull market!

In the chart above, I updated a red dotted linkage of important week highs including the ATH from the year 2015. This red dotted ATH resistance line intersects the lower line of the 1st double arc in this important GUNNER24 Weekly Up Setup at 2215 index points by the end of August 2016: 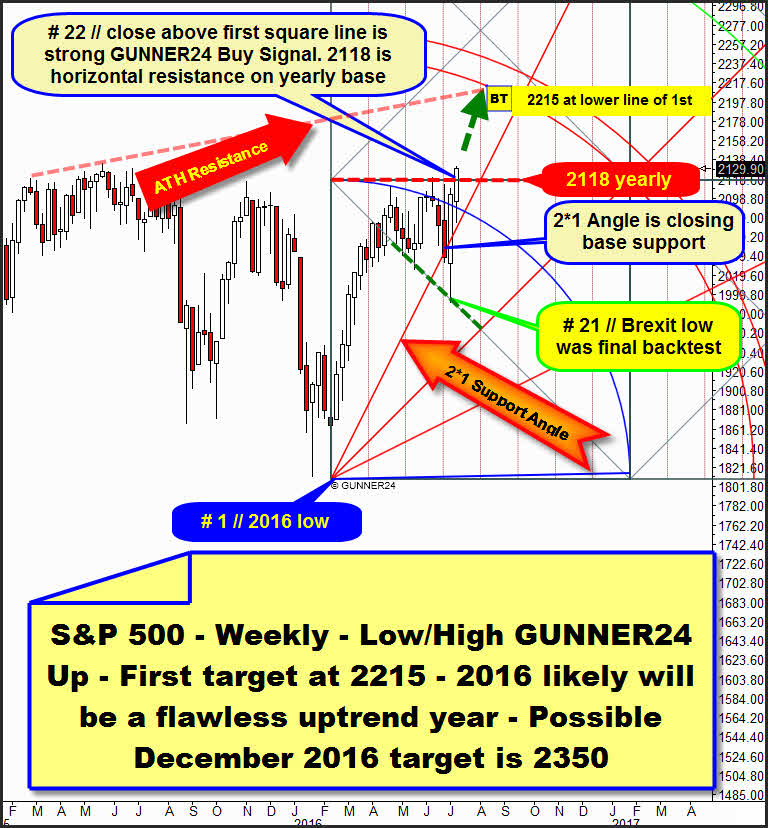 The weekly up setup above starts at the extremely important February 2016 low, the final year low. Last trading week, (# 22), the first square line at 2118 = important and strong horizontal resistance of the year 2016 could be overcome on weekly closing base.

The 2118 resistance horizontal being overcome is the second consecutive GUNNER24 Weekly Buy Signal since the Blue Arc was taken upwards with the week candle before last (# 21) already.

That emphasizes A) the significance = importance of the Brexit low for this market as well as the US stock market in general. The Brexit low is where something new began for the S&P 500 and likewise for all the other broader US stock indexes…

By finally overcoming the Blue Arc and the 2118, the new S&P 500 bull market upleg that had started with the Brexit finally activated for the time being B) the lower line of the 1st double arc as next higher reachable uptarget in the weekly time frame.

Thus, the first target of the new upleg is at 2215 because that’s where the ATH resistance intersects the lower line of the 1st thereby shaping an important upmagnet for the index! Indeed for the period of middle to end of August 2016.

A backtest of the 2118 area - usual now very important = strong support area - could be used to open a long position for the 2215 run!

We know this: the February 2016 low was an especially important changing point for the market. That’s why a new weekly count = # 1 begins at the low of this week. And the week of the attained Brexit low was reached 20 weeks after the 2016 low. Therewith, the week of the Brexit low was the 21st week of the upleg that had begun at the year low 2016.

The Brexit low # 21 was an important changing point, a cyclic low. Thereby, another long-lasting bull market upleg started at the Brexit low! It has to last now for at least 5, much more likely 8 weeks, but technically rather 13 weeks till the market possibly should reach the next very important cyclic high in/near the 34th week (21 Fib number + 13 Fib number) of the new uptrend.

If the new uptrend cycle that began at the Brexit low wants to last for at least 13 weeks, the 2215 as final cyclic price high appears much too low!

==> Till the beginning of December 2016, the market might reach the 2350! The probability for this is at about a 60%. The 2350 target region is a possible monthly and yearly uptarget for this S&P 500 bull market that was worked out long ago. 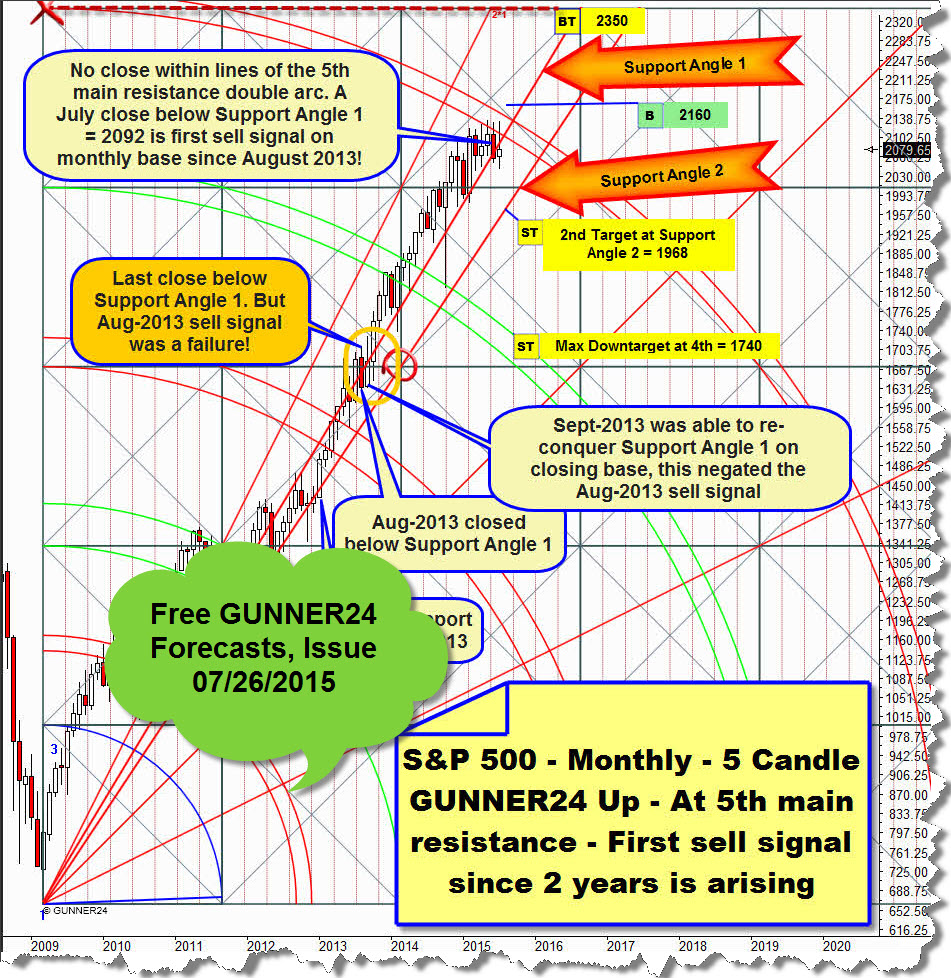 Click me!!! And additionally watch the noted Buy-Trigger within monthly setup above. A monthly close above 2160 is finally confirming the 2350 combined monthly + yearly uptarget for the S&P 500 bull!

==> Ultimately, yet again the year 2016 might crystallize as a flawless uptrend year! With an attained yearly low near its opening (February) and a likely reached year high by the end (late November/early December) of the trading year!