What an impressive precious metal rebound

As of the commencement of the trading week gold and silver got cracking. The metals ascended during 5 consecutive days closing near the weekly highs. Gold rose by 4%, silver did by nearly 10%. Gold produced the 2nd highest week closing this year. That was 58$ up in one week. December 2008 was the absolutely last time there was more! It was the strongest week in gold since the tempestuous April.

I think, in terms of price we might have seen the lows of this correction. I trust that the lows of Friday before last with the turning point at the weekly support we expect there (gold 1478 and silver 33.60) are significant starting from those lows a new GUNNER24 Initial Impulse on daily basis.

Here’s at first the weekly gold chart – so to speak for a better overview and to introduce the detailed analysis on daily basis: 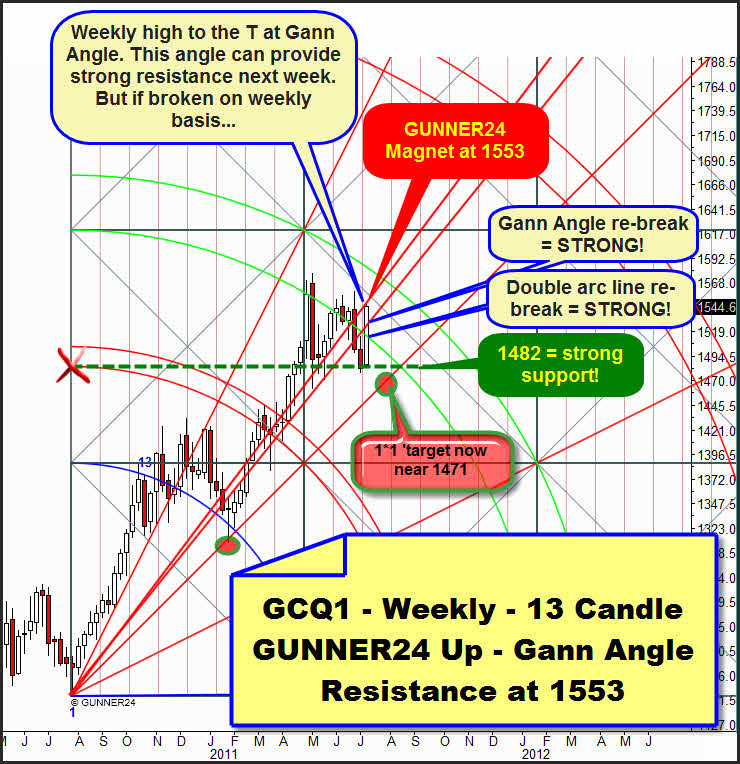 As we analyzed in the last issue gold turned upwards by the weekly support at 1482. Admittedly we assumed that a turn just up to the 1508 would happen, because a relatively important Gann Angle resistance on daily basis was lying there. Inside the GUNNER24 Gold Trader and the Member Area at the lower line of the 2nd double arc (1516) we went short then because that’s where "technically" the obvious weekly resistance was lying.

Breaking this resistance led to another re-break, namely the weekly Gann Angle resistance we see in the setup above. These re-breaks of the daily and the weekly Gann Angles which are really resistances induce the trend acceleration. In case of re-braking, the angles are the blowing rate as it were blowing up the rocket to the next important Gann Angle within an upswing. Just go into the 4 hour chart, on Wednesday and on Friday you’ll identify 2 candles there which make those ignitions visible. Before these "rocket launchings" you’ll always make out visible consolidations at the highs. Above, in the consolidation areas some important Gann Angles on weekly and on daily basis are lying… Once they’re broken it’s going upwards ultra-swiftly…

By the week closing gold is exactly below a Gann Angle, a weekly one respectively which should really provide resistance. 1553. If that one is broken it’ll be going on equally explosive. Is it going to be taken, next week?

It is not in the first attempt, I think! We should expect the high there, at least for the first half of the week.

But let’s see one thing after another. The daily 8 candle up started in January 2011 prognosticating perfectly the change at the 5th double arc. Corresponding with the actual monthly GUNNER24 Setup which has been putting out the 1576 as to be an extremely important target for months gold turned down.

I’d like to call your attention to two important items: Consider first the support functions of the 4th and the 5th double arcs at the green-red circles. Unequivocally, gold is always being caught by them somehow, including the following rebound. The conduct of gold at the 5th double arc is clearly corrective. Certainly we see closing prices within the 5th one but never below it. Above the 5th one gold is clambering down, as it were. The 1478 low was marked now exactly at the intersection point of the setup-anchored Gann Angle and this 5th double arc – green circle. From there, gold went off like a shot. Retrospectively, a very important price and time magnet must have triggered off the ignition. I think, gold is being within a new initial impulse. The question is just how many candles are comprised…

Since the ignition happened exactly at a magnet the 1478 is the low candle # 1, Friday is candle # 6, thus for Monday, Tuesday a top will be on the agenda. But if gold produces a 13 day initial impulse (instead of an 8 candle impulse which actually would be compliant with the gold rules) in any case we’ll have to expect a new year high very soon. Still there’s nothing either in the monthly or in the weekly setup which might release a profitable long-term buy signal. It would take a July closing price of more than 1590 to trigger off a weekly buy signal.

Pay attention now to the 3 past tops at the red circles. They are lying either exactly on an important time line or very close to it. Next Monday again is lying near an important time line. So gold might turn just temporally. 1552 is not only resistance in the daily 13 candle up setup but also weekly resistance in the weekly 13 candle up setup. Furthermore an important Gann Angle is likewise passing through the 1553-1550 area. That’s what I’m expecting to be the top in the beginning of next week if the 8 candle initial impulse is confirmed. Then gold should fall down to the support Gann Angle maximally, at 1540-1542. That’s where we a resume of the upwards-trend will be to be speculated on – if the retracement area resists.

Here again we see the power of the last week. A monster upwards candle as seen many times during the 3 month bull-run at the beginning of 2011. Everything was re-conquered which should really provide powerful resistance. That fact jeopardizes unduly any short-positioning… What will happen if the monster begins to show its claws again? Next week may already be decisive. Like 6 weeks ago silver is tackling above the 4th double arc. It’s not clearly broken, so we haven’t got a buy signal. Like 5 weeks ago the 4th may press silver down again – mightily. At 37.20 there is a trend line that seems to play an important part in this daily setup as well:

To understand the actual silver correction better than I did so far (see actual daily 3 Candle GUNNER24 Down) I’ll fall back on the elliptical technique. Thereby we’ll try to optimize the optical link of the price/time context a circle setup can’t provide and to work out some new clues concerning price and time targets.

In the last issue I held pretty flippantly forth on the 33.60 GUNNER24 Monthly Support. It was reached for the umpteenth time, it resisted again… and so on. But now the event seems to have taken place at a quadruple price and time magnet. There’s 1. a Gann Angle Support combined with 2. an important time line and 3. a horizontal support and 4. a diagonal, depicted here as green dotted. Looking at the candle right below at the quadruple magnet the low was formed in front of the 4th double arc, and that one was broken in the course of last week. There was a buy signal on Wednesday! In addition, on Wednesday the important yellow Gann Angle was re-conquered where silver marked the previous correction low (yellow/green circle) exactly on an important time line inducing a visible upswing, you know. This Gann Angle is that extremely important! The re-break is very significant being a greatly positive signal!!

Below at the quadruple low a new GUNNER24 Up Setup is starting. The initial impulse should end at 37.20 in this setup. It’s the same resistance we can identify in the Ugly Monster setup. If silver takes that resistance in the course of next week it would be a very strong buy signal. The 40$ would be the target! Gold is supposed to produce some new all-time highs!

Please don’t think now that I had identified this important magnet before yesterday. It took at least one hour just to combine the starting point of the setup with all the important anchor points the right way. I really proceed only optically for that, trying to draw to the right and upwards or downwards and to adjust until the optics tells me: Yeah, that might fit. The important anchor points are the different circles which symbolize support or resistance, depending on their color. It’s all sketched in the chart… On balance, in my opinion all the anchor points are going perfectly together in a logical way.

Just as a result of the price and time correlations in the past a quadruple magnet could be identified by this technique.

Flippantly spoken, a quadruple magnet happens as often as a five-leaf clover in the Sahara desert. That’s why I believe that we’ve seen the lows. Thus we’ll have to do a volte-face to long!

Please pay attention to the intersection point left above. We install an elliptical GUNNER24 Counter Setup there:

We place it one by one at top of the original setup. Right below at the green oval the 5th double arc of the counter setup is situated… 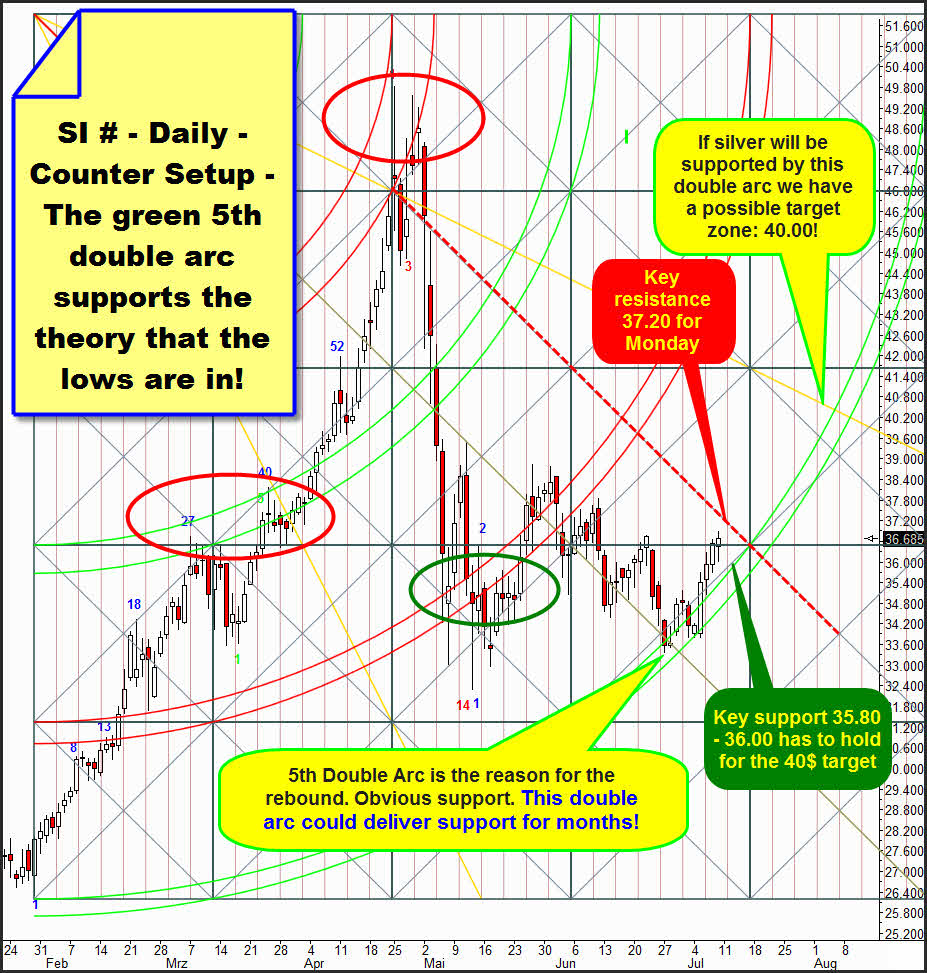 We make the original elliptical setup disappear. Only the counter setup remains visible. The reactions of the silver contracts at the double arcs are clearly visible. Support – resistance. If the 5th double arc continues supporting silver it may go on until October 2011. At short term, after the rebound from the 37.20 on Monday/Tuesday in the course of next week a super long-entry at the 5th double arc might be possible! Actually the surroundings should resist at 36$, and there the next initial ignition upwards should go off. SL is lying underneath the lower line of the 5th double arc.