Gold future topped into current 2017 high 5 weeks ago. Afterwards a so-called Waterfall Decline, a panic down cycle began which finally broke former strong 1220-1223 yearly GUNNER24 Support on Friday. Today I will present the downwards dragging magnet, which is responsible for the Waterfall Decline. Since we are able to identify the dominating Waterfall Decline magnet, we can act accordingly! 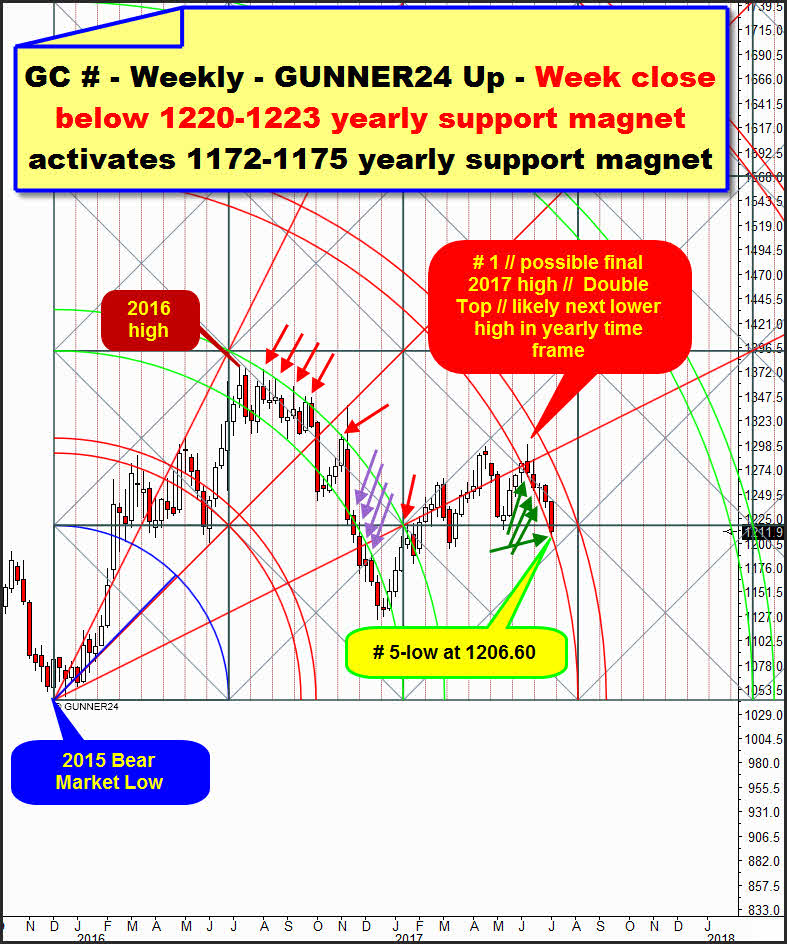 Above is a GUNNER24 Up in the weekly starting at 2015 Bear Market Low. As you can see, this up setup isn`t correctly adjusted upwards according the GUNNER24 Measurement Rules. The reason to use this technique is that I recognized that current downtrend which has started at # 1 // possible final 2017 high shows a lower low series that obviously must be oriented to a natural existing hidden arc support. Setup above gives a main idea how recent made arc oriented lower lows mathematically correlate with previous made lower week highs caused by some double arc resistance lines.

4 of the 5 recent made downtrend lows in the weekly exactly match with lower line of 3rd double arc that radiates natural support for the underway Waterfall Decline. Last test of lower line of 3rd support from above was Friday at 1206.60 which also means the absolute low of downtrend week = # 5-low.

After studying the candles of current downtrend in relation to the up setup I recognized another important thing. Additionally the individual highs of the week highs seem to follow, seem to respect a somehow curved resistance!

I tried a lot until I found this one: 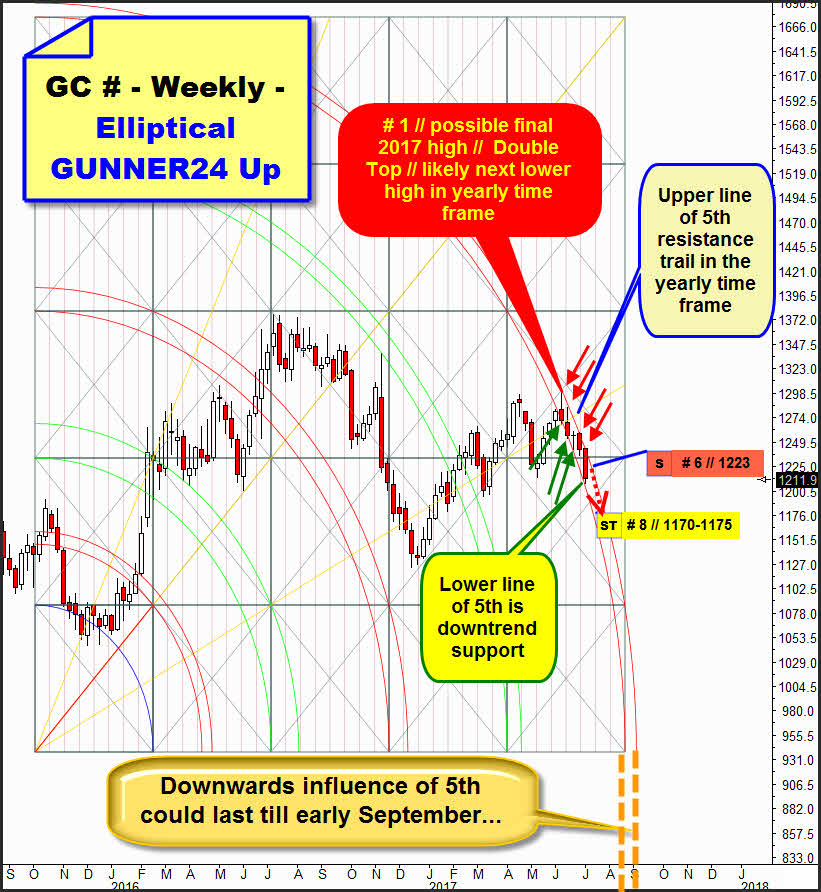 A sick thing, a crazy placed and adjusted elliptical GUNNER24 Up Setup in the weekly. But as it looks the falling lines of 5th double arc above nail the received lower highs and lower lows of current downtrend nearly 99% PERFECT!

By the way... actually - and for the near-term future - the upper line of 5th above is a falling curved resistance rail in the YEARLY time frame cause that magnet forced the gold future contract into highest bullish extreme of 2017 = current 2017 top!

I tried anything but no other setup placement and double arc adjustment fits so perfect, nails the current week extremes. There is just one possibility that nails lower downtrend highs and lower downtrend lows relation in such perfect manner. The 5th as placed above. 5th double arcs have always the closest distance between the lines compared to the other former double arcs, 1st, 2nd, 3rd, 4th. This means this downtrend runs in a narrow path.

Third. Since we now have identified the current most dominating bear factor for gold, we are able to work with this confirmed resistance magnet:

A) The time factor:

==> A Waterfall Decline, caused by steep and tight downwards oriented 5th. Well, just the first week close above upper line of 5th above is a relative sure sign that gold has ended its underway bear stampede! The very first week close above the 5th is a buy signal that a next countertrend in the weekly time frame has started.

==> As long as the weekly candles are caught within now steeper and steeper downwards dragging lines of the 5th gold remains in its bearish panic cycle, is naturally forced to decline lower and lower each week candle, faster and faster usually. The bearish panic might continue - in the very worst case from my point of view - till early-September until then the influence of 5th officially comes to an end. Or, gold shows very first close above upper line of 5th which is first GUNNER24 Buy Signal in the weekly time frame officially signaling that current selling frenzy is over!

B) The price factor and the evolving trade setup:

Cause gold has lost 1220-1223 yearly GUNNER24 Support Trail on weekly closing base next important monthly downtarget finally is activated. 1170-1175 is additionally very attracting GUNNER24 Support in the yearly time frame. Odds are very high that gold will work off that downtarget = combined monthly and yearly support magnet within underway Waterfall Decline cause given time signal points to downwards pressure until at least mid-August!

Next week is # 6 of downtrend. Cause # 5-low (1206.60) on Friday found support at lower line of 5th and gold was able to bounce nearly 6$ into 1211.90 week close, its allowed and possible, that this bounce will continue just for testing back the now formal downwards broken major 1222/1223-magnet.

It`s no coincidence that upper line of 5th Waterfall Decline resistance upmagnet resides precisely at 1223.00 for next week # 6! It would be textbook behavior seeing gold immediately testing back such massive attracting magnet, now combined weekly and yearly GUNNER24 Resistance Magnet for the # 6, afterwards continuing its strong decline.

A classic backtest of the 1222/1223 is in the cards, allowed and perhaps likely, so this very well-confirmed resistance area is the most obvious short magnet for gold actually. Afterwards gold should continue its slide till the next lower important yearly GUNNER24 Support Magnet at 1170-1175 area is worked off and perhaps first time tested in course of downtrend week # 8, the next higher Fib number turn possibility after the 5 delivered another very ugly sell signal cause 1222/1223 support looks definitely fallen short.