Today, among gold and silver I am going to deal with the hard commodities that are performing best in 2014 including their existing respectively their assumed uptargets in the monthly time frame.

Whereas the stock markets have worked well the last years, in the time scale of their current bull-runs now looming more and more the soon start of a several month pause in the uptrend that in 2014 – because of the long-lasting overbought indicator condition – may easily extend into a heftier correction move, actually many commodities are just only looking up to the beginning of some new lasting bull-market uplegs.

Thus, as matters stand today, for the rest of 2014 and through spring and summer 2015 these hard assets are much lower risk and, in terms of perspectives, undoubtedly more promising invests than stock investments: 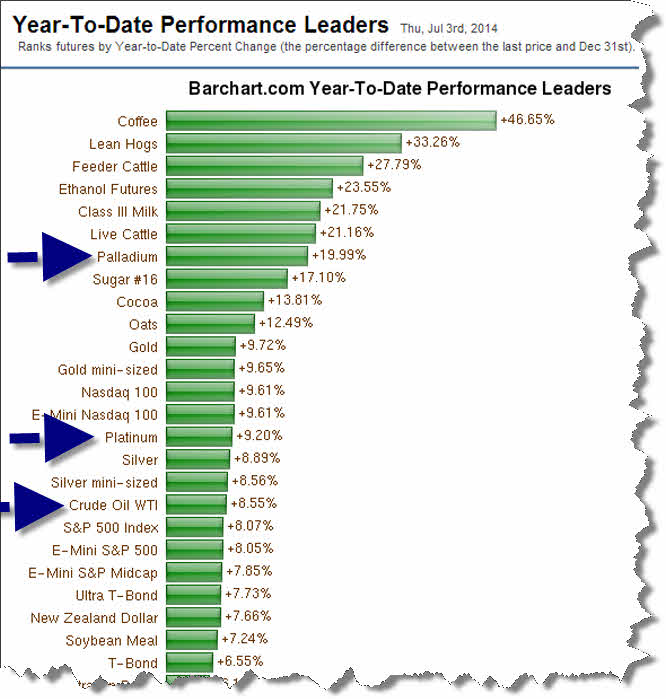 Besides gold and silver – that we regularly analyze and track in the GUNNER24 Forecasts – the best performing hard commodities in 2014 are: palladium, platinum and crude oil WTI.

It is running ahead of the remaining important precious metals because for months already it has been in a new upleg in the secular bull market who should last several years.

With its extremely high bull-market uptargets (at least 1077$ or more likely 1500$ respectively even 1700$ - see GUNNER24 Forecasts, issue 03/09/2014) the leader is also indicating what will befall the world over the coming years:

A) Ongoing tensions on monetary politics between the axes Russia/China vs. the west and within the west axis themselve = extreme rise of inflation nearly everywhere in the world.

B) Shortage of the resources because of permanent, constant China growth.

C) The geo-political tensions and civil unrests – now recognizable for any Dummy – are very likely to extend the coming years! 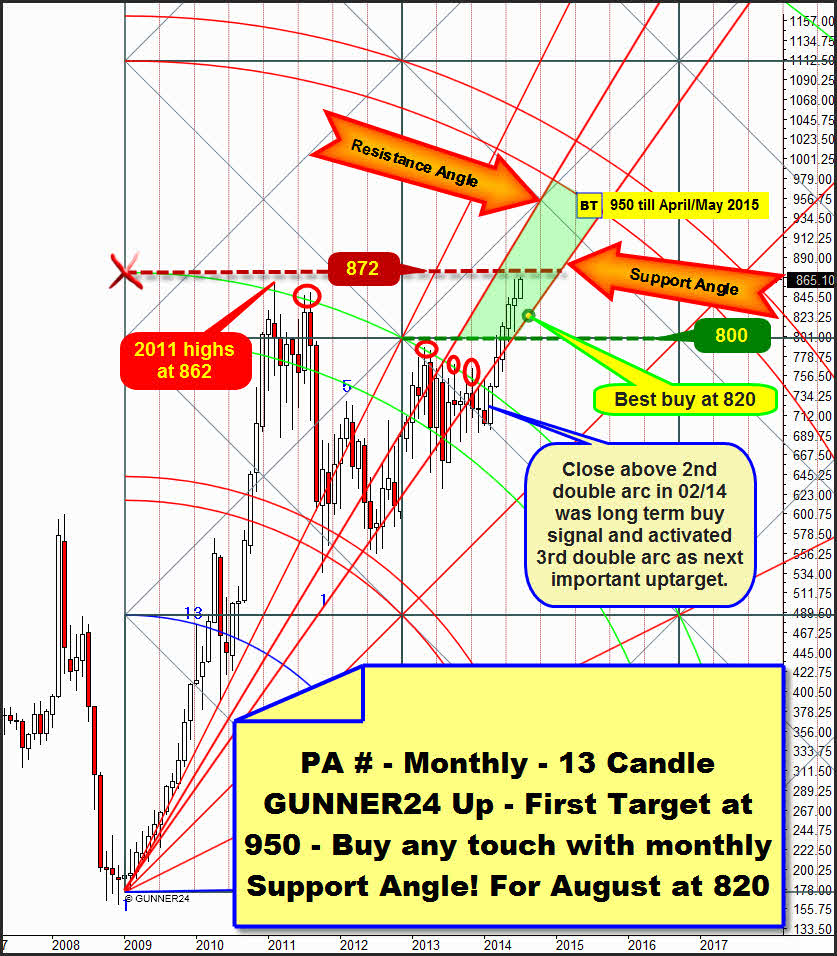 With the aid of this 13 Candle GUNNER24 Up Setup I explain why palladium is running ahead of all the other hard commodities and where it has to go and what it will mean for crude oil and platinum in the foreseeable future.

An important criterion is the first initial up impulse from the 2008 low lasting 13 months. For crude oil and platinum, definitely we can but derive an 8 months lasting up impulse. You can discern that in both setups below.

In terms of the duration of the first up impulse, crude oil and platinum performed withal as gold and silver and many other hard commodities did: It’s 8 months vs. 13 months of first initial up impulse.

I.e. in the clear that then already the crowd led palladium out of the 2008 low for a longer time. Also seen from the price factor angle, palladium performed clearly better than the rest of the mentioned commodities in the first initial up impulse.

It’s most important for the comparison of the markets that in 2011 all three commodities topped at the 2nd double arc, turning out the latter to be a brake shoe for all three of them during the following years. Palladium was the first to top in 03/2011, joined by crude oil with delay and platinum late (08/2011).

==> Palladium was the first of the three considered commodities to deliver the next significant buy signal, crude oil and palladium were to follow with delay!

Since overcoming the 800 horizontal resistance being now an extremely strong monthly support we can see that palladium is going to run upwards in the green hatched Gann Angle Corridor. Since February, every month made a higher high, a higher low and a higher close ==> a wonderful trouble-free sustainable uptrend – the new lasting secular bull-market leg I mentioned in the introduction… Nothing will be able to disturb the rise of this metal permanently! It will take the 3rd double arc environment to force the metal into a several month correction. Maybe…

Above the current 865 there is the 872 resistance horizontal, a strong resistance! A rebound from the 872 resistance may lead the metal to the Support Angle once more. This one takes its course at 820$in August 2014, the "best-buy-area" to jump on the bandwagon again!

However, if the 880$ mark is exceeded on weekly closing base the next couple of weeks, the uptrend will rapidly gather pace once more! I presume that the overcoming of the 880 mark will take place rather simultaneously with the likely super-lasting buy signal on monthly base for crude oil: 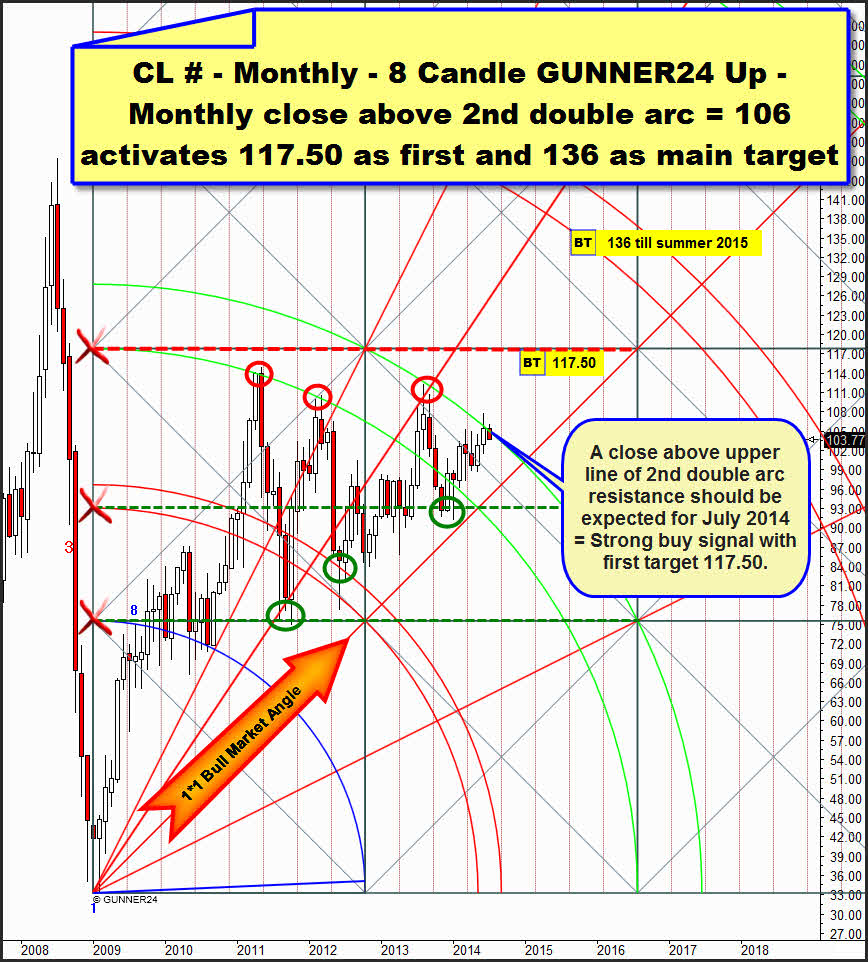 The 2nd double arc is monthly main resistance. We recognize 2 corrections that started from the lower line of the 2nd, touching down at the first square-line support respectively at the first double arc support and marking there some significant correction lows.

The first days of the July 2014 candle clearly point to the upper line of the 2nd to keep on being resistance. Considering the past, with the June 2014 highs at 107.68 a new correction lasting several months may have begun that in an extreme case might lead crude oil down to the 1*1 Bull Market Angle = about 96$ till October 2014.

If this happens, crude oil is supposed to develop the same performance as palladium did after its last February buy signal. In that case, crude oil would have produced a powerful sustainable buy signal because the longstanding 2nd double arc resistance would have been overcome! This would happen then with a 6 months delay, whereas 5 months would have been presumed (8 to 13 candle first initial up impulse…). It is absolutely ok however, there is always a little deviation…

==> The upleg starting then is likely to take a similar course as the one of palladium after its break of the 2nd double arc resistance in February 2014 – a clear and clean, sustainable ascent lasting several months with first target 117.50. Main target then will be the lower line of the 3rd that is expected to be reached in summer 2015 at 136.

By virtue of the just 8 candles lasting initial up impulse from the 2008 low, platinum, too, is dragging behind palladium temporally. So to speak as a representative of gold and silver, also optically it is expressing the relative weakness of the other important precious metals, compared with palladium: 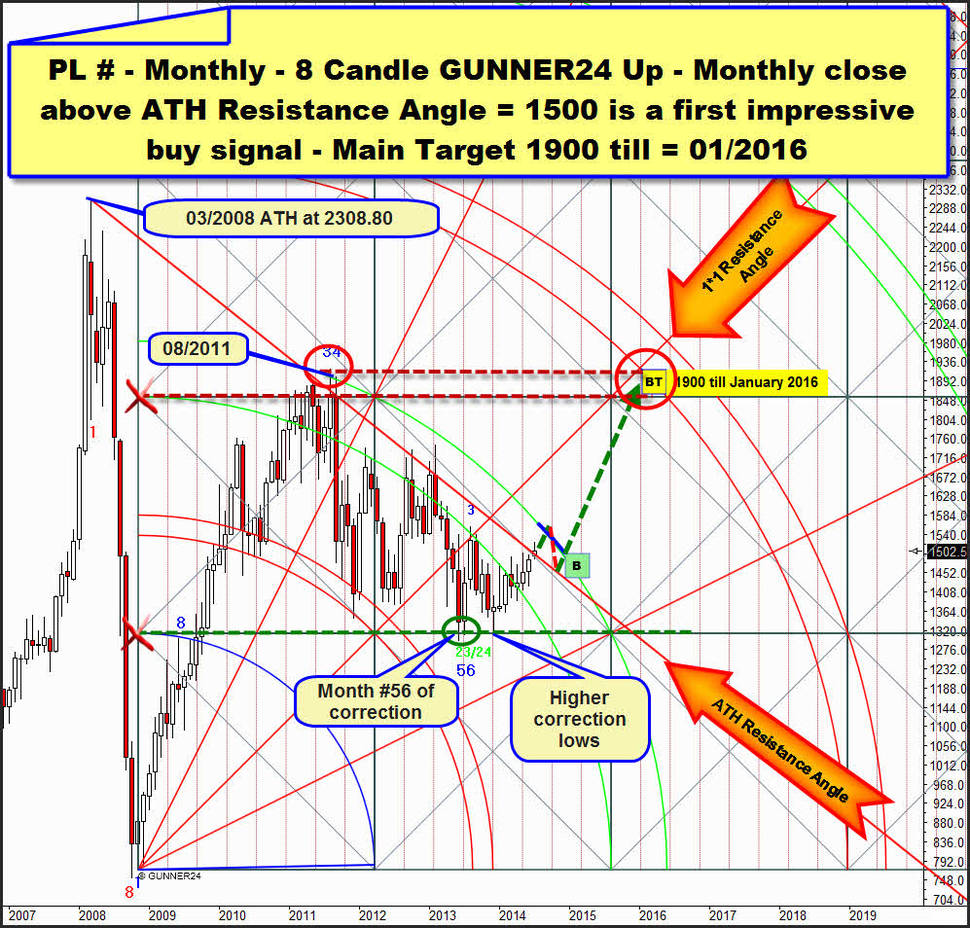 Spatially, the July 2014 candle is still a little distant from the upper line of the 2nd.

A touch with the upper line of the 2nd is to be reckoned with since this one has an evident magnet effect now. It should be understood that each monthly close above the upper line of the 2nd will also for platinum be the final signal to come after palladium. If for instance platinum closes above 1555 in July 2014 respectively above 1545 in August 2014, here, too, the party can be thrown.

Working off the upper line of the 2nd will be confirmed by all means if July 2014 closes above the important Resistance Angle starting from the 03/2008 all-time high. So far the metal has never achieved to close above this strong yearly resistance during the correction since 2011. Now I venture the prognosis that a July 2014 close above 1505 and thereby above the ATH Resistance Angle will succeed!!

This will be a first important buy signal on monthly base that in the end will lead to platinum succeeding in overcoming finally the mighty resistance of the upper line of the 2nd as early as in the course of 2014.

This one is technically supposed to provide resistance for at least 2, but rather 3 months after being reached (I presume that the upper line of the 2nd will be worked off, at the latest during August 2014 at 1545-1550) leading to a test – a successful one – of the ATH Resistance Angle. From there on, the next strong upleg in the secular platinum bull market is likely to start, with first target 1900 till January 2016 = watch the green/red/green dotted course.

==> After palladium, also crude oil WTI and platinum are on strong buy now!!

Be a part of our exclusive sworn GUNNER24 Trader Community – now…