==> Thereby, not only the FDAX/DAX being Europe’s power-house is short now, with more than 95% situated in the correction cycle, but likewise the:

standing shoulder-to-shoulder with the FDAX/DAX, made a bearish reversal with the June candle, now being short as well.

==> Quite certainly, all the important EU stock markets have topped!

Interestingly, the FTSE 100 = England as well as the SMI = Swiss, neither one of both within the EU economic sphere, in unison with the Dow Jones index, the S&P 500 and the NASDAQ were able to avert impressively a reversal in the monthly time frame. Yet all the 5 mentioned markets are likewise clearly short now on weekly base.

Today’s GUNNER24 Analysis is based on the monthly charts of the DAX future (FDAX).

At first, I’d like to go most intensely into the triggered monthly reversal. Then into the resulting correction targets and useful sell-short entry marks according to price and time: 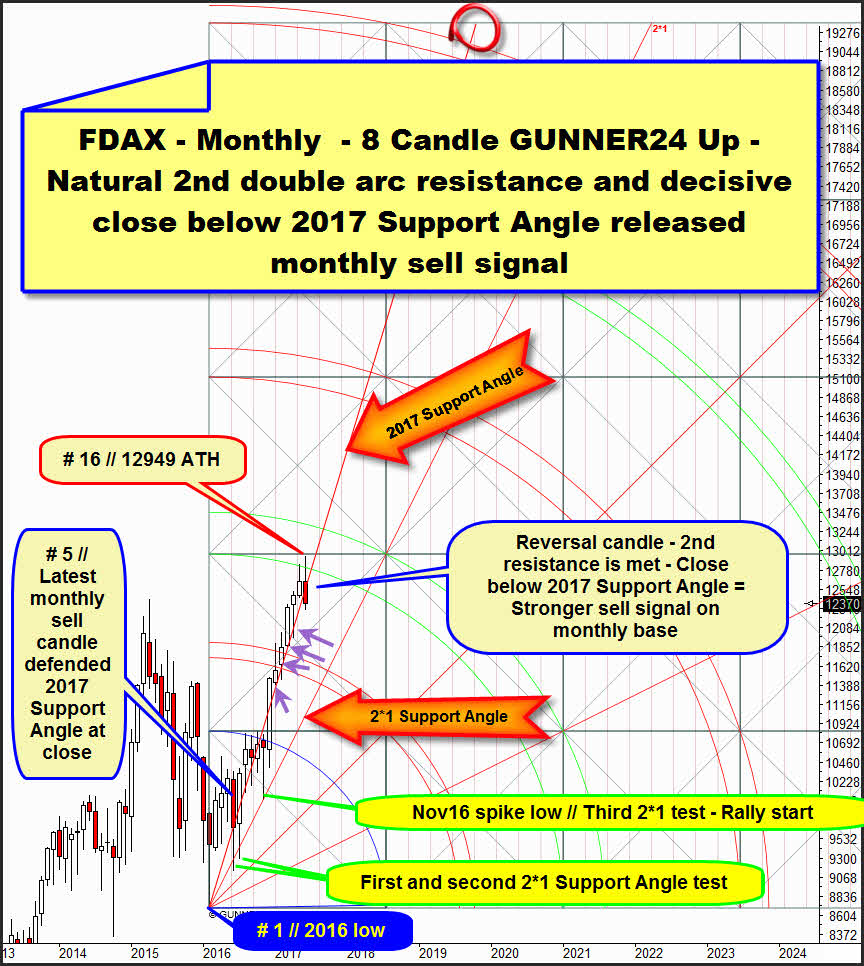 Above, you see the GUNNER24 Up Setup that – in my opinion – depicts resp. traces the latest bull market ascent in the best and finest way.

It starts at # 1, the final low of the year 2016 measuring a classical 8 Fib number initial up impulse.

The very most important and the very strongest bull market support is plainly the 2*1 Angle which was tested back high successfully three times in the bull market having lasted as many as 16 month candles. Last, it was at the November 2016 low after the Trump vote. This last test of the 2*1 Angle triggered the last multi-month upleg that met an adversary in the form of the 2nd double arc resistance at both the high of the month of May and the attained # 16-June 2017 alltime high (at 12949pts).

The # 16-June 2017 candle shows a bearish reversal, released by the important resistance of the 2nd double arc .

The # 16-close is situated far below the 2017 Support Angle that can be anchored naturally at the upper end of the setup. Thereby, I’m getting to the presumable sustainability and potential muscle of the just triggered sell signal in the monthly time frame…

…as you can realize in the chart with the aid of the placed purple arrows, the 2017 Support Angle was manifold tested positively and therewith important support on monthly opening base = strong support in the yearly time frame.

This one definitely dropped with the # 16-June close. A yearly support trail fell on monthly closing base. Thus, I think that the triggered sell signal is very serious!

==> Technically, it means - because of the enormous force of the last rally according to price and time – that the pending correction move is supposed to last either 2, 3, perhaps even 4 month candles.

Before I get to the presumed price targets = downtargets triggered by the # 16-June candle, at first a little trip to the sell signal in the monthly time frame that was triggered before the last. It was released with the close of the 5th candle of the bull market. The # 5 was likewise a crystal-clear bearish reversal in the monthly time frame. # 5 was the result of the Brexit, but – as we see well – it was a false signal, a bear trap, since the bearish reversal of # 5 had already been denied completely with the close of # 6. Yet… from my standpoint, the close of # 5 is to a T on the 2017 Support Angle. So, this one wasn’t fallen below then, but it already administered important monthly closing base support… 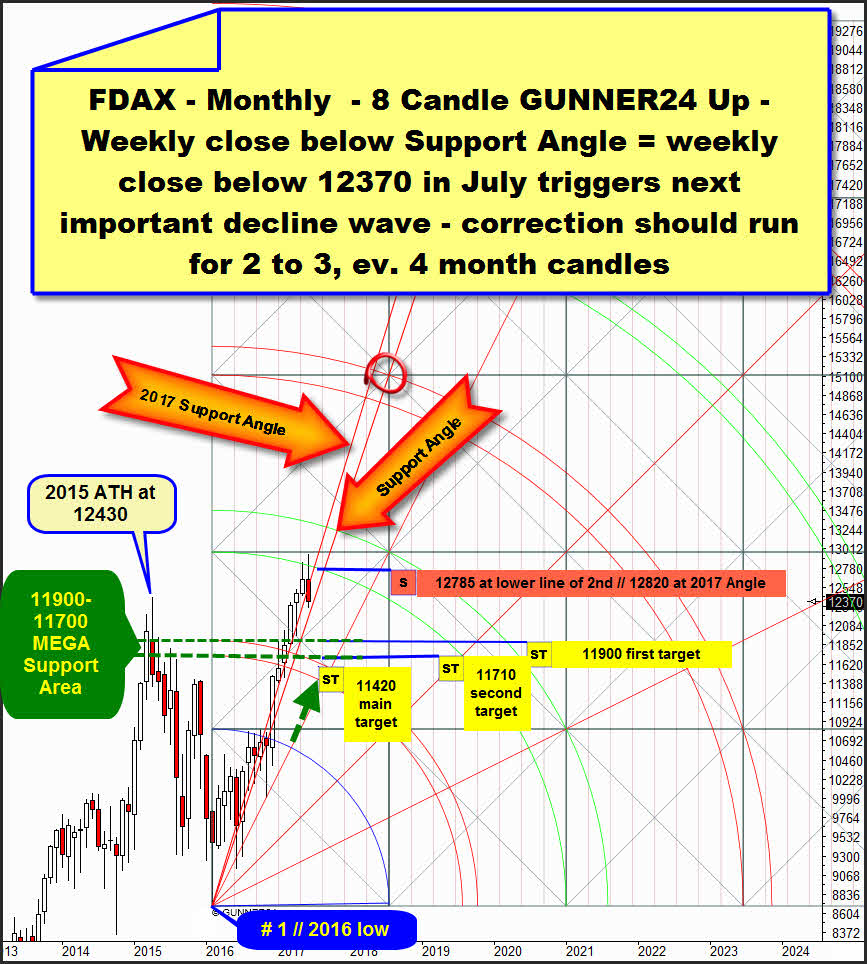 Here again the same up setup. Added and highlighted are the most important supports below the current quotation and the best cause safest sell-short entries.

Nearest monthly support is the Support Angle. Likewise naturally existent because it can be anchored in the setup quite normally. A look into the past of the Support Angle shows that it has given monthly closing base support ALWAYS and FROM THE BEGINNING of the bull market started at # 1 // 2016 low. So, it’s also support in both the monthly and the yearly time frames!

This Support Angle is at 12380pts for the upcoming # 17-July candle. Thus, as early as tomorrow at opening it will be tested. With the opening auction tomorrow, the FDAX will meet immediately a powerful support in the combined monthly and yearly time frames.

==> Since by tradition the Independence Day trading week is strongly bullish, we’ll have to work on the assumption that the Support Angle should stop the recent sell-off, to the surprise of quite a few, having to compel a countertrend in the daily time frame and thereby possibly being able to force the FDAX into the next test of the lower line of the 2nd resistance double arc resp. even of the 2017 Support Angle.

That’s where the best cause most riskless short-entry marks are:

==> Sell the possible cause allowed classical backtest of the lower line of the 2nd double arc double arc in the course of July = short at 12785!

==> Resp. open a second short-position at 12820 in the course of July in case the FDAX is really able again to test the 2017 Support Angle from below!

Well, thus far the Gentleman’s entries. Since life is hardly spreading gifts and making decisions is always difficult especially when it comes to trading items, the first clear weekly close below the Support Angle (at 12380 for # 17-July) that is a weekly close below 12370-12365 will be the next important sell signal in the weekly time frame!

==> The first weekly close below the Support Angles is supposed to trigger the next hefty selling wave! Accordingly, next week being the actually always bullish Independence Day trading week, is also allowed to release a further sell-off.

I assess the # 16-June GUNNER24 Sell Signal in the monthly time frame as to be that strong, so with 90% of probability a very deep backtest of the former 2015 ATH (12430pts) and a serious backtest of the "round" 12000 mark will ensue between July and September 2017. # 16-June already closed below the former 2015 ATH after all. That’s kind of a clear announcer that the 12000pts are supposed to be tested back.

MEGA Support is now the 11900 to 11700 region. There are some strong GUNNER24 Horizontal Supports at both 11900 and 11710 arising from the 1st double arc that has been taken upwards definitely. Both together are forming now future extremely strong horizontal support in the yearly time frame.

As lowest likely summer correction, I consider a classical backtest of the 1st double arc support environment, now likewise being support area in the yearly time frame, that is about 11420 = main target. The probability of the 11420pts main downtarget to be worked off through September 2017 is just around 25%, because the bull market is extremely strong which makes such a roughly 12% correction from the ATH seem to be difficult.