Beheaded like a goose, then plucked - now comes a strong sell

I know that many investors and readers are feeling uncomfortable facing a short entry in silver and gold. But rarely GUNNER24 had produced such a spate of unequivocally frequent short signals as it did last week. I can’t remember many times I had to analyze both precious metals being in such a plucked condition as they are at the moment. They were beheaded on Thursday, plucked on Friday, and the gutting, roasting and eating with great relish is most likely to drag on for the next 5 weeks until we’ll be supposed to see at least the temporal end of a 13 week correction by the end of July. 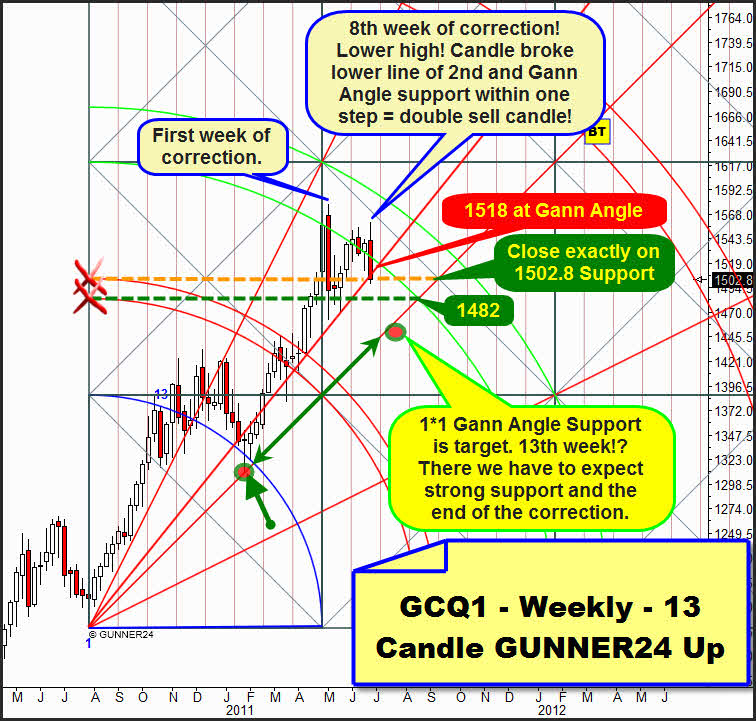 The correction began in the week of the all-time high. After that sell off week a 7 week counter move followed that put the lower high onto the floor on Wednesday. Now we might reckon with a 13 week correction all in all. The coming 5 weeks will be called the summer doldrums. That weakness of the precious metals has been well-known for decades. It is triggered because more and more traders say goodbye for holidays to make the demand go down and so does the traded volume.

The result is that gold and silver – and the other precious metals like palladium and platinum with them – mostly pass through a sideways phase with falling prices before the demand advances again by the beginning of August because the traders prepare for the waiting autumn rally.

Price correction: The 1450-1440 is offering itself as to be the correction target. That’s where the long-term 1*1 Gann Angle is passing which was tested and confirmed for the first time in January 2011. The visible reversal candle confirmed that the 2nd double arc is actually a hurdle impossible to get over. The lower high was marked in the 8th week. Not only the support Gann Angle that had been dominating for 20 weeks was broken, but in the same go the lower line of the 2nd double arc was.

I’m not so sure how long the horizontal weekly support at 1502.8 will resist, or whether it will really be able to trigger a little counter reaction to the 1518 from Monday. The best entry into shorts on weekly and daily basis is lying there! Monday will be option expiration day, you see. Everything will be possible that day: On the one hand the 1482 may want to be reached immediately after opening on Monday making us see – at about 1482 – a rally until up to the 1518 (through Thursday), or on the other hand at opening the counter reaction to the 1518 may begin at once.

But one thing is pretty sure: A Monday closing price or a Tuesday closing price below 1494 would result in the 1450-1440 within ten days – a medium sell-off, as it were. That timing is because of the daily silver analysis - at the very bottom! This downswing would mean the following: The price target would be reached in about two weeks followed by a rather upwards-oriented counter reaction before the resulting chart pattern would be left upwards. 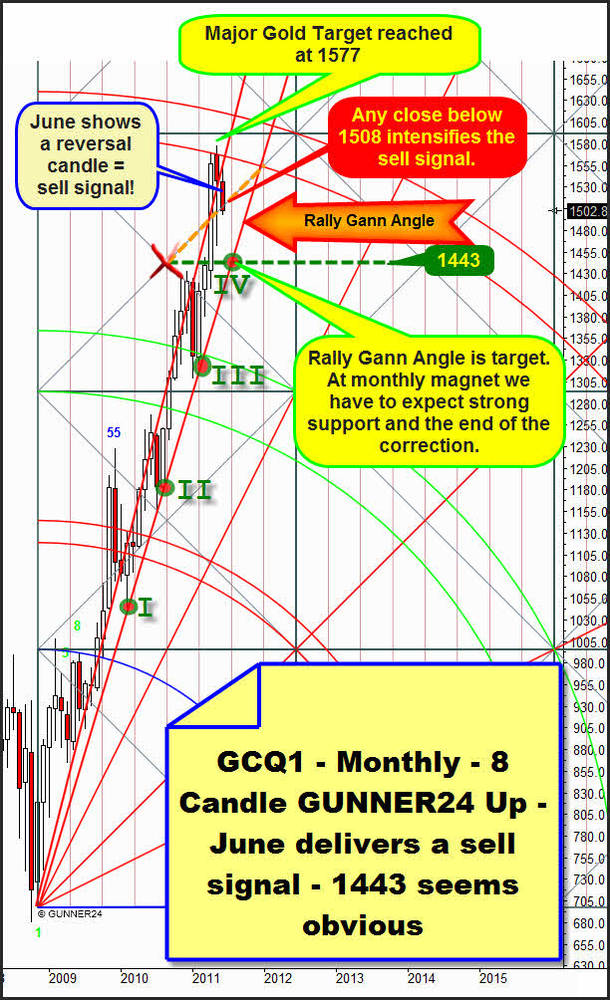 At first we make out that the major gold target was reached. There was no closing price within the 3rd double arc. The rebound from the major target is finally becoming visible with the June candle. June is producing a reversal candle. It’s a sell signal (don’t worry – just short-term). The same thing really happened at green I, II and III. A significant high is being marked – one or two months later a reversal candle will be produced before the rally Gann Angle forces gold to continue the long-term upwards trend. Then we recognize that the 1443 arise from the center of the just passed square. It’s a horizontal support. The 1443 will meet the rally Gann Angle in August. If there’ll really be a July sell off the low for July should be brought in there at 1420.

1502.8 – I like to experiment around, just to see whether something resists or wants to break or simply whether it’s important. For that I see to all the important time frames. And I turn, I shift and I reverse the actual setup in order to find anything: 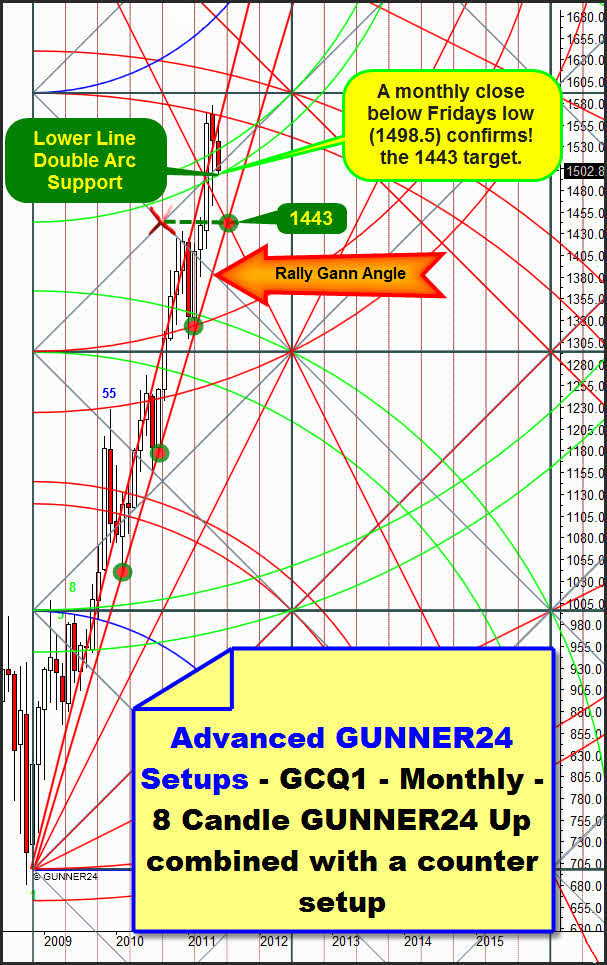 We turn the actual monthly setup, we put it upside down, so to speak – making a so called counter setup. We anchor it at the left side of the normal setup shoving it upwards however until the squares are lying one above the other. At the produced Friday low there is a lower line of a green support double arc. So we can see that the 1498.5 low is lying at a monthly support of undetermined character. That "may" trigger a counter reaction! As I said: If that one ends in the heights of the 1519 – well – in that case the shorts will yield more. On the other hand the rebound from this low to the closing price of 1502.8 seems to me too weak, so I suppose that the 1498.5 will not resist on Monday. That means in turn that a lower low on Monday would indicate a pretty safe short – until the next lower week support at 1482 should be effective! A monthly low below 1498.5 would be another short signal here again. 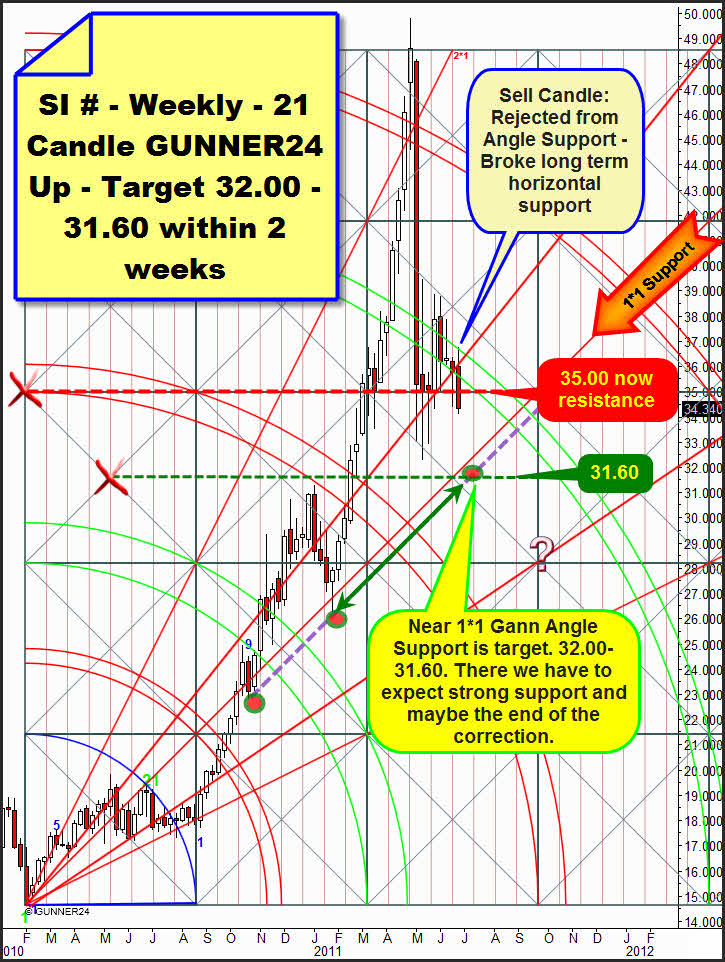 The situation of the weekly 21 Candle GUNNER24 Up: Last week the 35$ support broke on closing price basis. That one should be a strong resistance now. Here, the best possible short entry would be at a touch with the lower line of the 4th double arc at about 35.20, but maybe the week high will just be at 35$. As I have supposed for weeks at least the 1*1 Gann Angle is the target, but probably it will be the lost motion of this "really" very strong support. If it goes down orderly in 5 weeks this Gann Angle lost motion (purple dotted) will be at 32.50.

If we see another rapid downswing within the next ten days – as sketched in the weekly above – the target zone will be between 32 and 31.60.

The daily 3 Candle silver GUNNER24 Down facilitates this fast downswing: 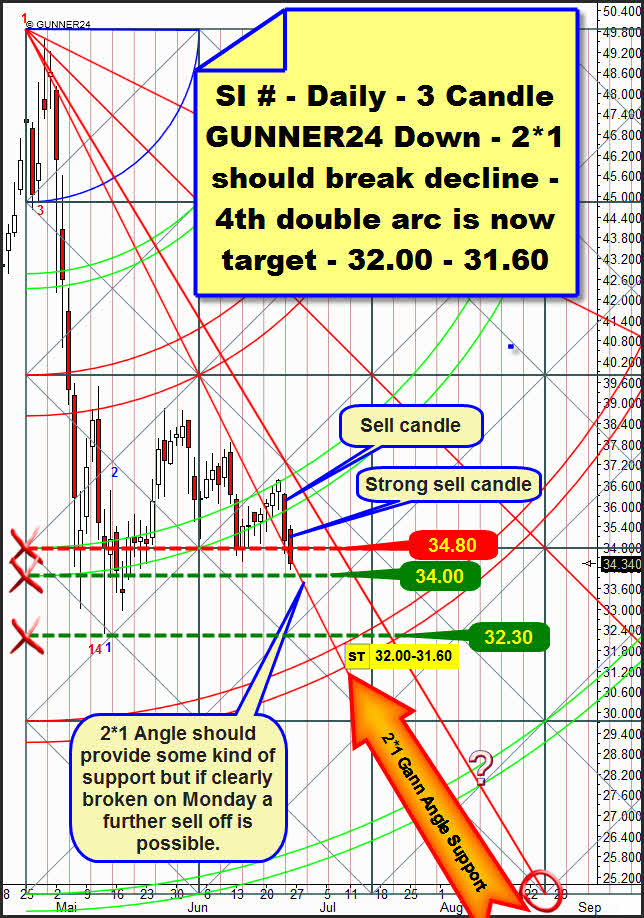 For the second time the daily chart broke the 34.80 support on daily basis. That’s supposed to mean it’s a short term support. At Friday closing silver was very weak. Closing below the support Gann Angle might have broken the angle which should really provide support. So it’s clear that it doesn’t resist. According to Gann it will have to increase the trend intensity if it doesn’t resist. Actually the 34 on Monday are pre-programmed, I think.

So silver is diving still deeper into the rather trickily structured support area. About that, pay attention to the extensive support area of the monthly setup:

The very important supports are bold above. Contemplating the scene we see that there is so much concrete between 34 and 30.50, so silver shouldn’t fall below 30.50. If that mark breaks we’ll see the 27-28$ soon! Furthermore, at the different marks or in their near surroundings a very strong but probably not long-lasting rebound may occur at any time. And in the course of the next 5 weeks, at any time that one may face with ruin or madness all the future-short-traders who are now jumping onto the train.

The first tough support is lying at 34$ being able to result in a rebound on Monday. I believe that a Monday closing price of clearly below 34 (about 33.80), combined with a gold closing price of below 1494 will open the doors to the new lows within ten days. It’s 31.50 and about 1443, respectively. If there is a recognizable Monday rebound of 34 and 1498.5 until 35.20 and 1519 by the middle of the week we’ll have the best short entries (strong sell), and we should observe the rather slowly eroding prices until the end of July. If on Monday 33.80 or 1494 respectively are reached some short entries with little volume and with leverage will be advisable. And they should be accumulated in case of the break of some further supports in the 4 hour or 8 hour time frame.