2014 is and keeps being a year for day- and swing traders. In 2014 those have bought acceptable lows in the bull – as per the motto "the trend is your friend", and they are going to continue doing for the rest of the year. Investors have nothing to expect not being advised to enter fully before the 10-15% correction that is still pending for 2014. This is my call.

Sometimes an analyst has to put the markets in perspective to prevent his readers from committing too big mistakes – qualifying. Keeping them off the overly big threats and mistakes avoiding losses as well as securing them by strategic short-positions is often more important than aiming for the quick money.

Around us, the impacts are getting closer. The escalation of the Ukraine crisis is rather imminent than easing of tension. Europe is living now in the big menace of a several year lasting energy crisis. It’s Russia’s gas. An oil crisis is underway because of Isis and Iraq… gold and silver are signaling now that the worst of the several year correction is over being due a new several year bull market.

The blooming idiots in power (bankers, politicians, governments) – a la long Peters Principle – have lost completely their sanity and control. They only bring us fear, debts, cheap money including bubbles and conflicts but no solutions because with their incompetent sandtable exercises they totally fail to see that the people out there begin to insurge because they are discontent.

The threat that the stock markets tilt sometime during the coming weeks because a butterfly’s flap or a domino release the correction is growing day by day.

How is it possible to keep stocks thereby – just because of a couple of more per cents up, till it bangs anyway? 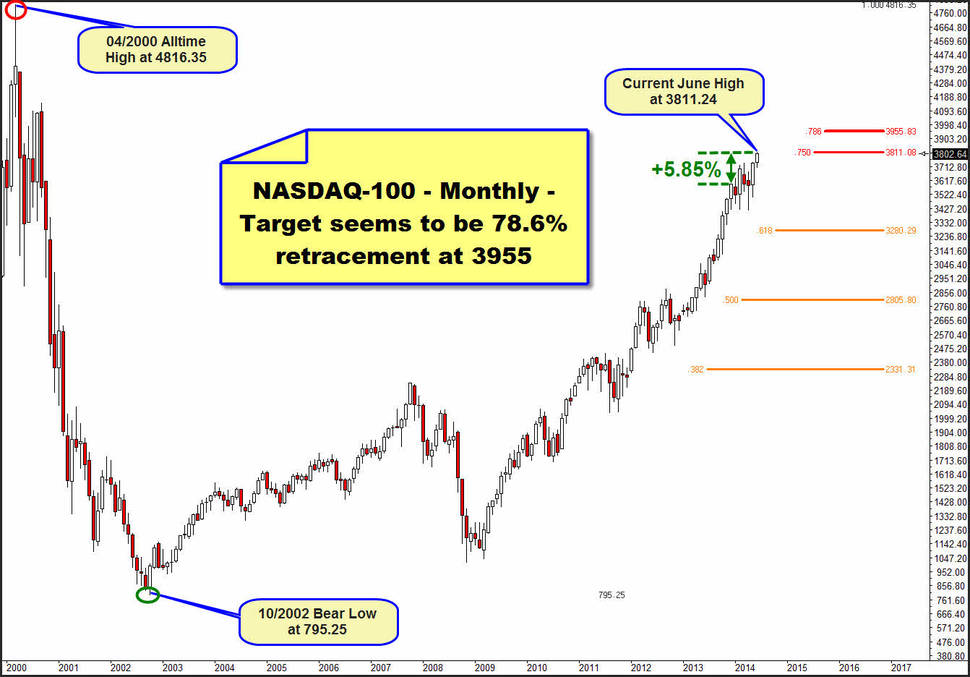 Underground is performing in 2014 the NASDAQ-100 index, the traditional leader of the US stock markets in a bull-market. In spite of all the cheap money flowing into the markets, the index is just only showing a plus of 5.85%. Go ahead and subtract now the inflation of a 2% we have just got officially. The real inflation respectively the perceived inflation rate is truly higher so on balance there is hardly anything to be left in the basket – like in most of the other asset classes.

The safe and sound 2014 stock environment where the analysts, bulls and media are cheering about new highs respectively all-time highs in the Dow Jones, DAX and S&P 500 almost daily now, is only based on thin trading volumes thus standing on feet of clay. The trudging around of the broader markets with a slight up-tendency of the first half-year is enervating and bad for every bear. Only some selective stock sector or punctual investments into "exotic stock indexes" are supposed to keep on generating good earnings in 2014…

I think now that the markets cannot begin with their correction, their 10-15% summer correction before being worked off at least the 78.6% Fibonacci Retracement from the all-time high at 3955 points sketched in the monthly chart above. Generally the 78.6% retracement is much more important than the 75% retracement that the NASDAQ-100 reached on Thursday.

The 3811 and the 3955 are important resistance now – natural resistance from the all-time high – resistance in the yearly time frame, even a decade resistance! So both of them are very important.

Thereby, the run onto the 3955 is only triggered in case two clear and consecutive daily closings above 3811 happen!

Triggered by this first decade resistance, also the correction of the US markets may virtually start as early as on Monday. It is an important domino that may make the house of cards collapse. It’s no more, no less. But I rather think that the 3811 will be taken upwards as early as during the next 5-8 trading days…

For, in the weekly time frame, the index is showing now that the uptrend might go on at least until 07/24 pretty undisturbed:

4 weeks ago, the resistance of the 3rd double arc in the currently most important market setup was clearly broken. Thus, with a 75% of probability, the next higher target in the time frame will be reached.

It is a matter of the lower line of the 4th double arc. If the index keeps on rising as it has done so far – the Resistance Angle has obviously the strongest influence on the current rise = magnet function – the market will meet this main resistance between 07/24 and 08/05 at 3905.

Regarding the current signaling it will take the next higher double arc in trend direction to force the index into the correction. It will either happen at the lower line of the 4th and the 3905 or – lo and behold – at the 3955 that is residing at the intersection point of the upper line of the 4th with the confirmed weekly Resistance Angle during the period above mentioned.

Thereby the Gann technique = Resistance Angle + GUNNER24 Forecasting Method = upper line of the 4th + Fibonacci- Method are showing a quite likely aiming point for this upleg at 3955! 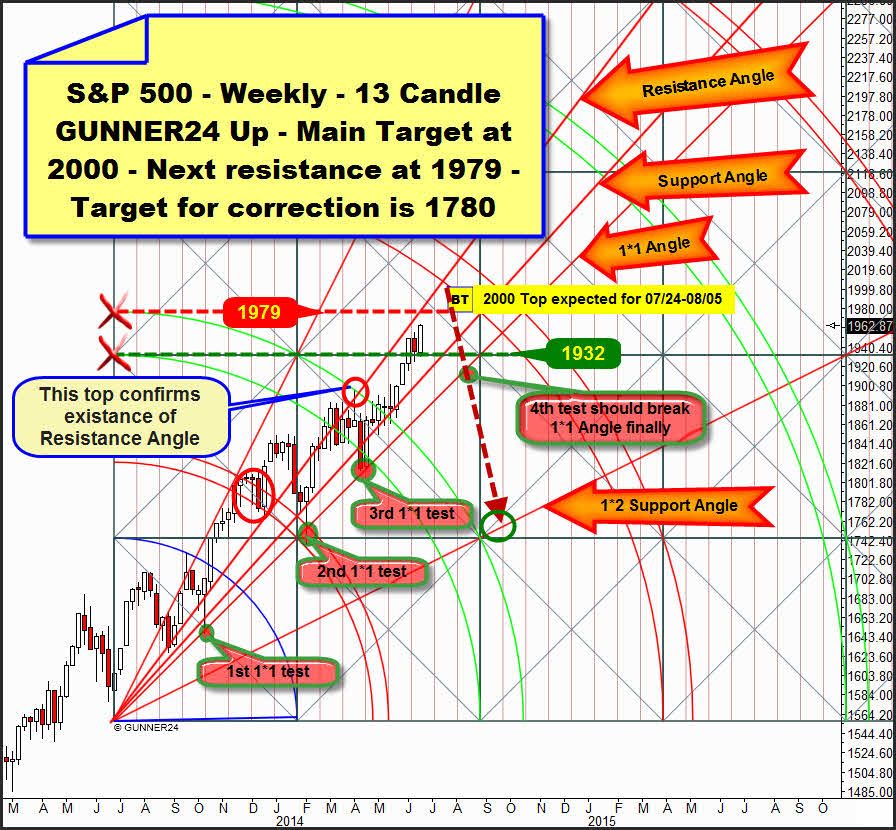 Likewise, at the late June 2013 lows we can apply the currently most important forecasting setup for the S&P 500 index.

Here, the first up impulse with a duration of 13 weeks determins the future resistances and supports.

After the 2nd double arc was likewise taken upwards in May here the lower line of the 3rd is the current main target = 2000 points likewise being supposed to be reached between 07/24 and 08/05.

==> Before that, the market is likely to find relatively strong resistance at the 1980 surroundings however. A 5-8 day correction may thoroughly start there.

The 1979 is the next uptarget in the weekly time frame now being expected to be attained in a pretty timely manner!!! The reason: Rather intensely the last two weeks tested the 1932 horizontal support coming from the intersection point of the lower line of the 2nd with the beginning of the setup. Since the current candle finally bounced clearly off the 1932 horizontal closing at the highs and new swing highs, now the 1979 resistance horizontal is activated as the next higher weekly uptarget.

==> In the NASDAQ-100 as well as in the S&P 500 the time is indicating simultaneously to a significant top between 07/24 and 08/05! Not before that, a correction will be allowed to start, I suppose. Thus, the broader markets are supposed to keep on rising slightly for 5 more weeks… Close hunting season for the bulls.

The absolute confirmation that the markets are actually in the correction leg will show very, very late/deep however, in fact only in case of the final break of the respective 1*1 Gann Angles in the weekly time frame.

Only if visible and obvious weekly closings below the corresponding 1*1 Gann Angles happen, both markets analyzed today will head for the targets of the correction, the 1*2 Gann Angles in a quick, tough decline. The entire correction leg is technically not allowed to last more than 10 weeks before a new mighty upleg in the bull should start then heaving the indexes to new year-highs by the end of the year.

If the S&P 500 closes below the 1*1 Gann Angle at the 4th test in the weekly time frame, we will have the indication that the correction will be likely to go to about 1780-1760 points.

If the NASDAQ-100 actually closes below the 1*1 Gann Angle in August in the weekly time frame, we will be allowed to expect a correction down to about 3300.