The reasons why the recent gold upcycle in the weekly time frame extended to 26 week candles from the 21 resp. 22 we still presumed in April, we can rationalize and comprehend now: 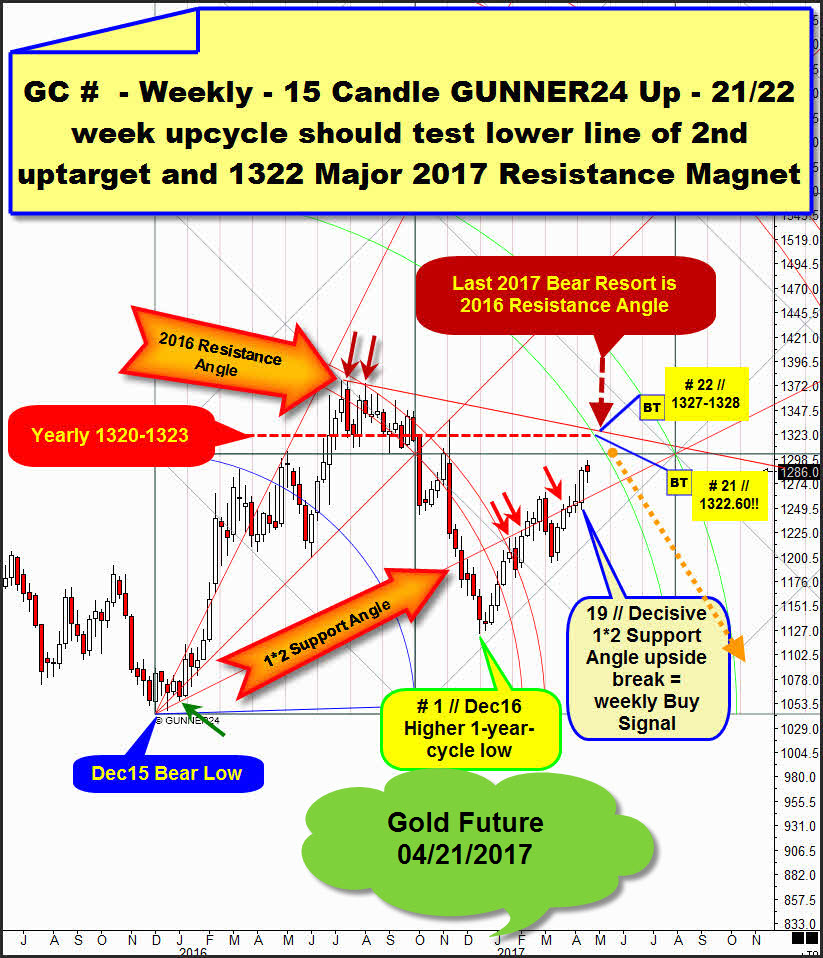 Early in 2017 already, the weekly gold upcycle that had started at the # 1-Dec16 Higher 1-year-cycle low activated a test of the lower line of the 2nd double arc resistance in countertrend direction within the currently most dominating weekly GUNNER24 Up Setup.

So, at the beginning of April the major uptarget of the lower line of the 2nd upmagnet/main resistance, simultaneously and together with the well-known 1322$ Major-GUNNER24 Yearly Resistance horizontal – see the weekly chart above – heavily suggested themselves to be leading to the top in the context of a "classical", hence oriented by the Fib number 21 weekly upcycle = weekly countertrend cycle.

Things turned out a little different.

Let’s go now into the current conditions and the shortterm downtargets that are now to be worked off immediately plus into the now possible – cause now activated – doom and gloom scenario of the gold market. Namely furthermore with the help of the weekly 15 Candle GUNNER24 Up Setup that starts at the current bear market low of December 2015, applied already in the entry chart:

So, it lasted longer to reach the activated and now worked off lower line of the 2nd major resistance uptarget. After 26 weeks of upcycle, gold – inspired by the overall 2nd double arc resistance environment – topped at the current 2017 high (1298.80$). Then the new weekly downcycle begins, being now underway confirmed, since the last trading week # 27 A) found its top exactly at the 2*1 Angle, B) visibly bounced from it, C) closed near the week low (1255.20$) D) is a bearish reversal candle.

Therefore: ==> the weekly trend is down now, with some certainty!

The entire trading year has indeed around 52 trading weeks. Thereby 52/2 = 26 signifies the likewise important half-year cycle. This fact means that gold A) made its final half-year high with really 150% of certainty the week before last # 26. B) with very high probability, the summer doldrums period began at the # 26-top 2017 high, which again promises that now gold – at least till the middle or end of July – should keep on acting weaker ==> bears use to have full control now!!

==> Because thereby the # 26 half-year high is supposed to be an extremely important intermediate lower high – triggered by the 2nd double arc, it has thoroughly got the potential to have been the final 2017 high. An additional mathematic proof for this possibility you’ll find below, after the next chart…

====> !!! The thoroughly existing very bullish circumstances that has arisen since gold succeeded in delivering the last three weekly end prices above the upper line of the 2nd, I’ll come back to at the end of this issue !!!

First however to the very short-term consequences supposed to result from the last very bearish week candle that is also a weekly GUNNER24 Sell Candle:

For 2017, two important support trails (= major supports = yearly supports) have evolved. Firstly, it’s the Support Angle highlighted in the setup above. This one is manifold confirmed week closing base support in the year 2017.

Secondly, it’s the Support Angle’s lost motion whose course is parallel to the Angle highlighted dotted purple in the chart above. So far in 2017, this Support Angle lost motion was tested successfully five times most exactly at higher weekly lows.

==> Shortterm downtargets, down-magnets for gold are now these two support trails. They’re supposed to be tested back either in the course of next week # 28 or in the course of the week after next trading week # 29.

It would really take the aid of a fine-tuning by a lower 8 hour resp. 4 hour GUNNER24 Setup to determine which of both shortterm down-magnets will be tested back when and where, and perhaps being able to crystalize as the most important support at present. Just roughly, according to price, the short-term downtargets are as follows:

One of these shortterm downtargets is supposed to be worked off resp. tested within the next 10 trading days, with +95% odds. Since the downtargets are matter of support trails in the yearly time frame, from there a howsoever counter-reaction in the daily time frame is expected to start.

Not by chance this gold analysis is titled "Advantage Gold-Bears" however. Cause a total-crash setup has developed. It’s the mathematic feature above mentioned showing that even the 2017 top can be associated directly with the attained DEC15 Bear Market Low.

Subtracting now exactly this 253.20$ multi-month downtrend wave according to price and time from the 1298.80$ 2017 top, you’ll get 1045.60$ which again corresponds 100% exactly to the 1045.40$ DEC15 Bear Market Low and the starting point of the weekly up setup according price. For this, watch falling red dashed decline measurement.

DEC15 Bear Market Low, 2016 top, higher 1-year-cycle high are directly and 100% connected with the 2017 top. This allows a new 253.20$ downtrend to have started at the 2017 top whose target is the DEC15 Bear Market Low! Such a move is now activated. The coming months, the normally weak summer months, gold might reflect the 2016 downtrend 1 to 1! A wave = C wave! That would be evil for all the gold bulls. But since the extrema of the years late 2015 low, 2016 top, late 2016 higher low, current 2017 top directly correlate, also the major wave directions and the major wave dimensions might be equal resp. nearly equal. A = C.

In 2017, in the weekly time frame unambiguously gold trades in an upwards directed pattern. Higher lows, higher highs in 2017.

This is being supported very strongly from below A) by the Support Angle as well as B) by the fivefold tested Support Angle lost motion. Obviously, this upwards directed pattern is not able - at least so far – to seriously test the 2016 top even approximately. Instead, the existing pattern support is tested back manifold without developing enough upwards power facilitating the serious test of the 2016 top.

==> Thereby, the 2017 advance is clearly to be classified as a potentially bearish pattern. A countertrend pattern! As a potential B-countertrend wave that began at the DEC16 Higher 1-year-cycle low.

Now, after the next possible, very important looking # 26-lower high = 2017 top = possible next lower high in the yearly time frame, the next serious backtest of the Support Angle and/or the Support Angle lost motion is imminent. It’s quite possible that both supports will fall finally in the summer doldrums, since the summer doldrums use to be gold-bearish cause most of the gold bulls are in vacations AND cause the stability of the important supports rather becomes weaker than stronger the more they are being tested.

==> If so, if both support trails fall, gold might test the yearly 1223$-1220$ GUNNER24 Support Horizontal during the coming weeks.

1223$-1220$ is the very last bull resort for gold! If this yearly support horizontal falls on monthly closing base in summer, the backtest of the DEC15 Bear Lows will be finally activated! & therewith technically well confirmed!! the bear market low backtest might ensue in early-December 2017 – after exactly 2 years then. For this, watch falling red dashed arrow possibility: 24 week candles downcycle, resp. 253.20$ down.

Of course, a backtest of the DEC15 Bear Low wouldn’t mean by a long shot that it might be defended in case of a backtest! It would rather be fallen below in a new downtrend after a next lower high in the yearly time frame (= current 2017 top…). For this, watch dark-red dotted arrow outcome.

==> The time factor allows a possible soon backtest of the 1223$-1220$. Gold is now within the lines of the 2nd double arc that actually ought to pull down gold in a bearish way the coming weeks and months:

Last but not least to the thoroughly bullish fact that gold succeeded in ending the last 3 week candles above the lower line of the 2nd double arc natural resistance. It’s an indication that the underway weekly downcycle should NEWLY have to be corrective. A 70% chance!!

Gold succeeded in advancing into the space between the lines of the 2nd double arc!

Just like it succeeded already with the run into the natural 1st double arc yearly resistance environment!

==> Thereby, the naturally existing yearly 2nd double arc resistance environment was considerably harmed. Plugged. This signals that the Gold Bulls possess some power - at least in 2017!

The 2016 downtrend that was triggered by the 1st having started at the 2016 top, was likewise just a corrective one since indeed it went deep and lasted long but anyway it came to an end with a higher high in the yearly time frame.

At the latest however this will happen at the important and technically very strong yearly 1223$-1220$ GUNNER24 Support Horizontal, to start in succession a hard rally run that will reach the upper line of the 3rd double arc in the course of 2018 = 1450$-1470$. For this watch the green dotted upwards arrow outcome.