Now the going gets tough for the gold-bears

Talking about the price development as well as the important buy or sell signals, since then no new insights have arisen. Jerking lazily, gold is hanging around. Actually nobody has got an idea whether it keeps on going down or a rally is due because of the oversold condition or the sideways mode continues – just the typical summer doldrums.

The fact that gold has not kept on falling for a couple of weeks mostly going sideways makes it bullish in a short term. Especially compared with the negative performance of the silver- and gold-miners during the last weeks… and with the thoroughly strong decline of the white precious metals silver, platinum and palladium.

In my opinion, gold will start a new upwards thrust in the course of next week, at the latest from Tuesday after next (06/23) being hefted above the 1200$ and likely to test the 1222$-resistance mark again.

The big question I am asking myself is: Will the bears succeed in generating a new important – in medium term – sell signal in the course of next week or won’t they?

A next important medium-term sell signal would be a weekly close below the 1172$!

I think the time is rapidly winding down for the bears becoming more and more difficult for them to press gold down again. The seasonal pattern being the current COT development (Commitment of Traders) as well as two different GUNNER24 Up Setups in the daily time frame and the presently most important GUNNER24 Up Setup in the weekly time frame signal the next sustainable up-move on daily base to start soon! 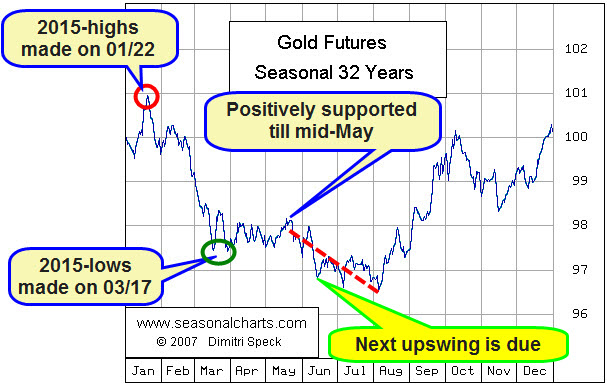 Above is the average course of the gold future over more than three decades. In 2015, gold has been adhering to this pattern to a T! An early high in January, followed by an extremely weak February, then furthermore downwards till March (the current 2015 low was marked on 03/17), followed by an important top mid-May – this May high was brought in on 05/18 – then down till mid-June.

As a rule, by mid-June a 1 to 2 week rally move uses to start! As mentioned, this one may newly reach the 1222$ resistance! Traditionally, June is the worst month for gold as to its performance being frequently attained an important cycle low in June. In bull-market phases, the June low +/- 1 month has mostly been the year low…!!!

On Friday, the current COT Report was published: 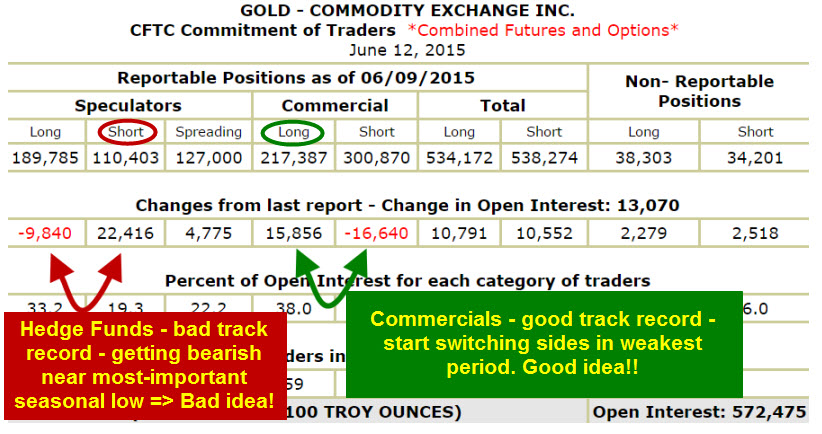 Within a few days, the Commercials – most important and most powerful players in the market – began to cover their short-positions increasingly changing to the long-side. It’s most prudent to position bullish because the June lows may be very important possibly releasing the start of a massive rally.

The Hedge Funds, known for their bad timing and their lousy track-record went short massively during the past days. It’s really a bad idea to bet on shorts in the seasonally worst phase and before a possibly important cyclic low. But maybe the Hedge Funds have begun to position to the test of the 1000$ that is due in the medium term. I go on expecting the 1000$ test to occur by end-October 2015/early-November 2015 or so!

The following GUNNER24 Setups indicate now that a next countertrend upleg will start soon. Thus, the GUNNER24 Method is in unison with the seasonal pattern of the last 32 years and the expectations of the Commercials.

First, the currently most important dominating setup, the 12 candle up in the weekly time frame: 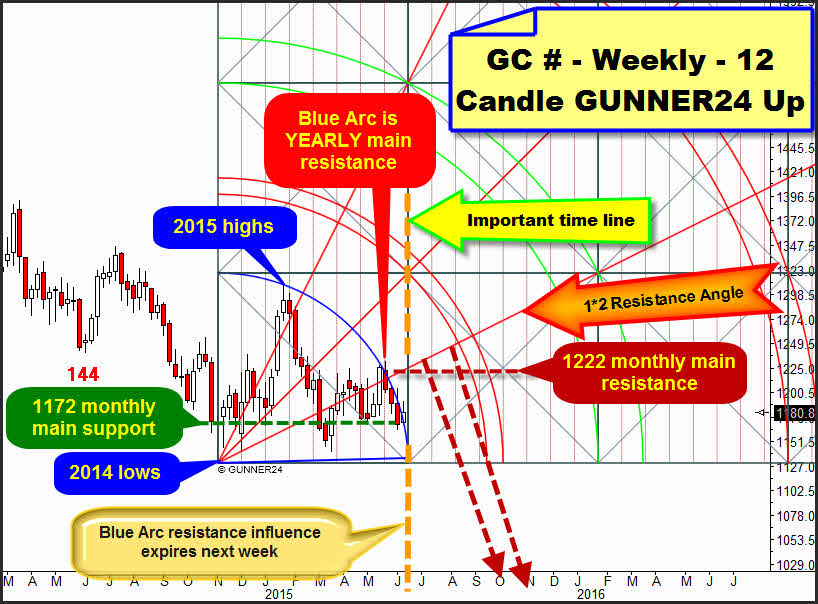 For me, it’s rather surprising how few resistance energy is produced by the Blue Arc. Certainly gold is joining downwards, but so far it has been pretty moderate, rather corrective!! than impulsive!!! This is bullish in the short and medium term!

Next week, the Blue Arc intersects the time axis (mind about this the dotted orange vertical). Afterwards, technically the negative influence of the Blue Arc to the price should vanish (backtest always possible). Besides, technically, according to time, gold is allowed to rise from Monday after next laying down a further important upmove.

By implication, this also means that in the course of next week an important low is due maybe gold achieving to produce a next important higher low on weekly base = a higher low than the March low = that’s bullish for sure in the short term and perhaps even in the medium term!

==> I expect gold to mark an important low in the course of the week then starting to head for/reach newly the powerful 1222$-GUNNER24 Resistance Horizontal. Perhaps the next rally-leg will also lead to a backtest of the 1*2 Resistance Angle a little higher in the 1240$ region.

When resistances and supports expire in terms of time, they often develop the highest momentum = most powerful forces. Then they can force the price into extreme lows or highs (exhaustions). In this realization there is the enormous brisance as to next week.

This is why it’s allowed and possible now that gold dives deep, even very deep again the next 5 days, simply because the Blue Arc resistance wants it to. The mid-March lows may be reached/perhaps even be fallen below. The 1172$ horizontal on monthly base may newly hold however releasing strong bouncing energy... 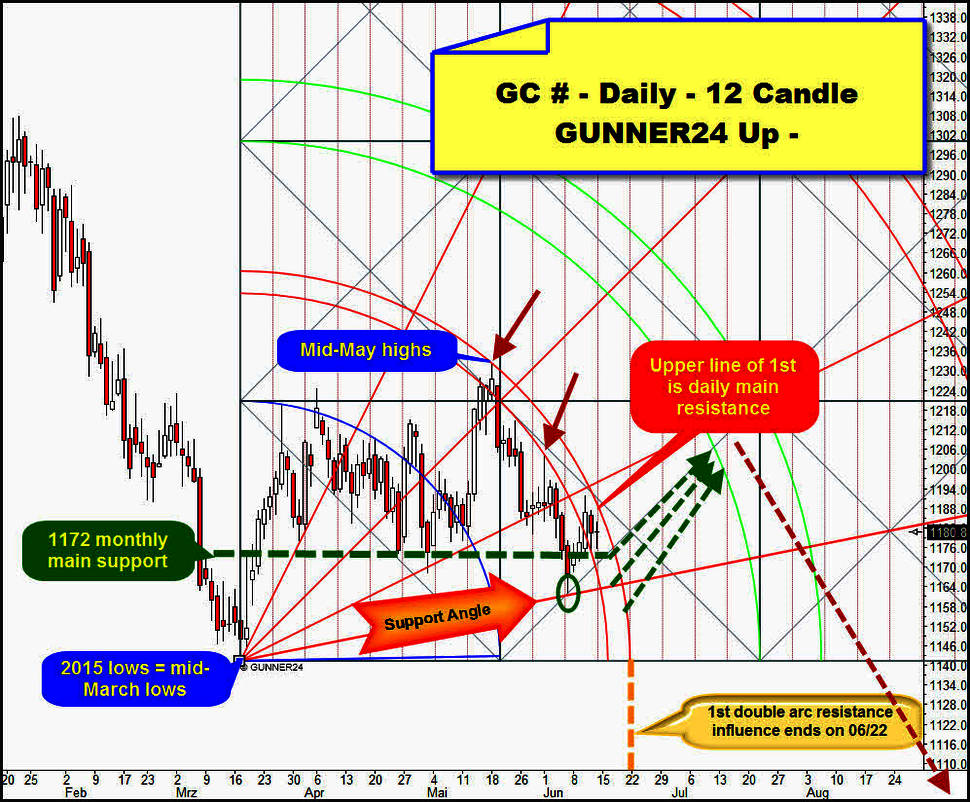 This setup in the daily time frame starts at the year low 2015, the mid-March lows gauging a 12 day initial up impulse. With a marvelous precision, the upper line of the 1st double arc resistance collects the mid-May highs. Since then, gold has steadily been falling because the 1st wants it to.

The resistance energy of the 1st double arc is pulling the price down. The current June low was reached 6 days ago, exactly at a Support Angle. Since then, a bounce is underway that succeeded in closing several times within the lines of the 1st double arc. This is at least a positive factor showing the inner strenght of gold compared with silver or platinum that performed pretty meagerly the last 5 days, after all.

Nevertheless I expect gold to be obliged to go even lower again in the course of the week respectively to test some important supports. It is currently trading within the lines of the 1st double arc. If this one is not broken upwards on closing base, the resistance energy of the 1st resistance double arc will be supposed to press gold down as long as this resistance will not have been expired officially, i.e. according to the time factor. This will be the case on 06/22! This date, too, is marked with the orange dotted vertical. Then, the upper line of the 1st double arc will intersect the time axis.

Another GUNNER24 Up Setup signals that on 06/22 some important resistances will be likely to expire: 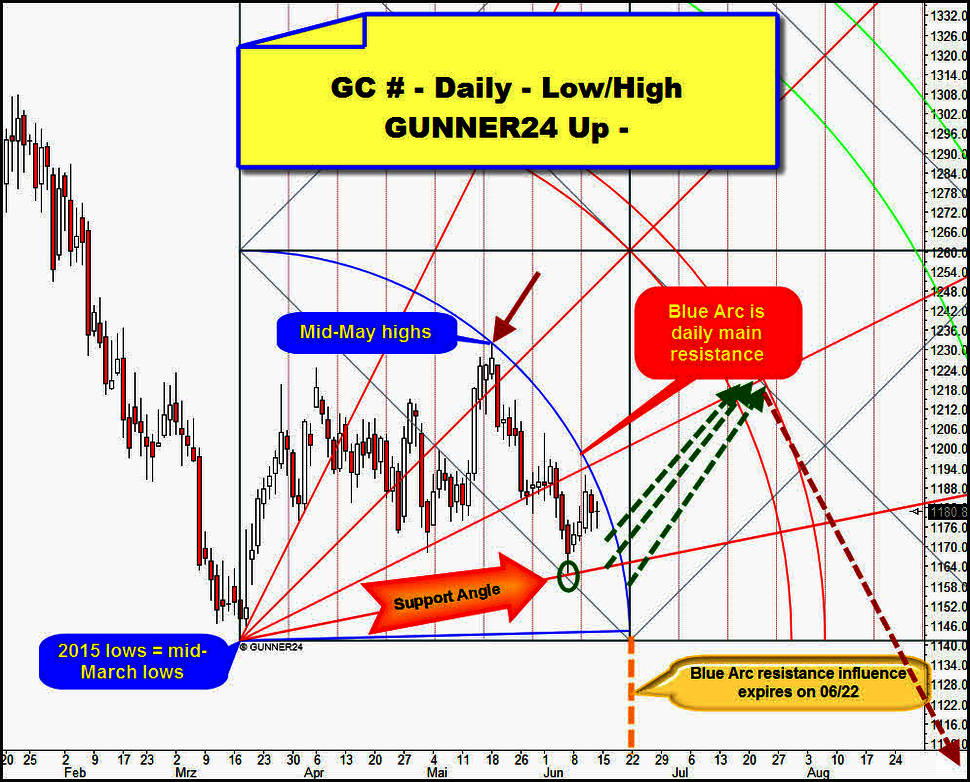 Thereby, 2 up setups exist in the daily time frame signaling simultaneously that at the latest from 06/23 a lasting upmove is expected to start.

In addition, the dominating weekly up setup signals that within the next 5 days – hence till Friday, 06/19 – the next important low in the weekly time frame is due!

==>> Next week will naturally center around the Wednesday FOMC. Until a FOMC Wednesday + 1 day/- 2 days, the Big Boys = Commercials like to press the precious metals into important swing-lows/-highs, regularly.

Such as the GUNNER24 Method together with the seasonal pattern and the current COT development imply, from Tuesday till Friday it should come to a very important cyclic gold low, followed by an upmove that lasts thoroughly up to 2 weeks being able to test the 1222$ again.

However – where might the low of next week take its course? 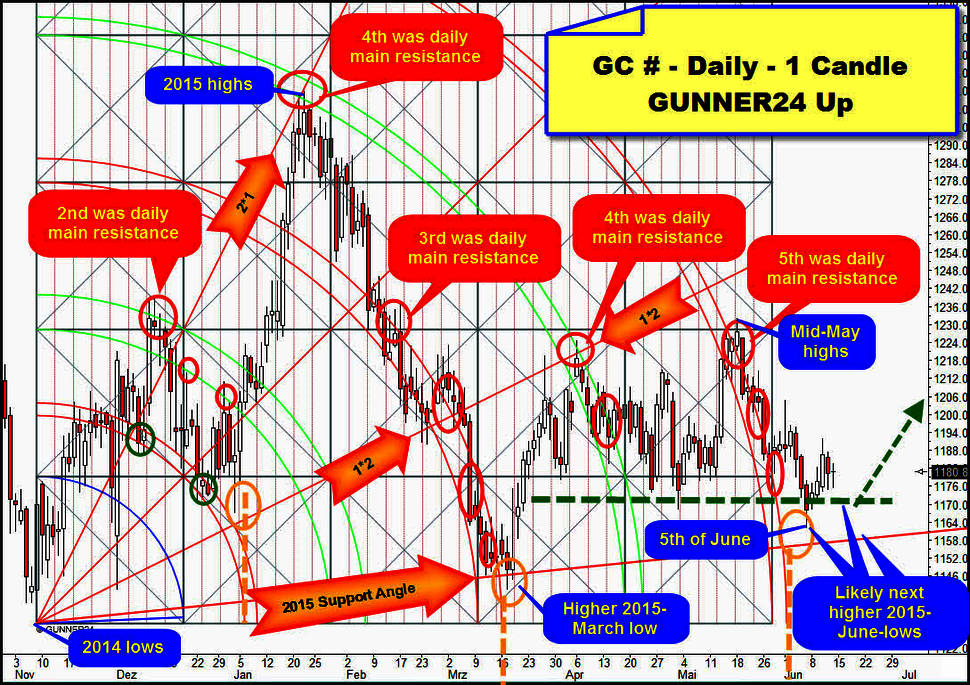 ==> I presume so by virtue of A) the fact that the Commercials = Big Boys after reaching the 06/05 lows have obviously applied themselves to the long side. I think the next COT Report will confirm that the Commercials once again shall have augmented their respective long-positions and once again shall have reduced their short-positions considerably.

Also the GUNNER24 Forecasting Method suggests that either already the low of June 5 or the low of next week will be the next important higher low in the weekly time frame.

Above, the development since the bear lows (November 2014). From out the bear lows, a weak initial impulse developed ongoing only 1 day that collected gorgeously the progress since then.

Rigorously, gold paid attention to the double arc magnets resulting from the 1 day up impulse. Important highs at the 2nd, 4th and 5th. At the 4th double arc and the 2*1 Angle, the high of the year 2015 was cemented. The 4th double arcs are always the main targets for the commodities. The bounce at the 2015 year highs and the downwards energy developed by the 4th double arc were correspondingly hefty.

The downswing following after the 2015 highs was determined mainly by the 3rd that pulled gold so long down until the temporal influence of the 3rd double arc resistance came to an end forcing gold into the mid-March lows, the first important higher low in the weekly time frame.

==> When the red 1st and the red 3rd lost their respective resistance influence according to time, briefly before respectively briefly after some important swing lows were marked. The factor time signaled that resistances were expiring. So to speak, it forced the metal upwards after the resistances of the 1st and the 3rd came to an end.

I think that also the expiration of the 5th double arc resistance was the starting point for something new, that the low of June 5 is very important perhaps having begun there a new upmove towards the 1222$ uptarget.

==> Thus, the low of the coming week is not supposed to be able to reach or even fall below the low of June 5. I think another test of the important 1170$-1172$ support region during the next 5 trading days would be just normal. This support is likely to hold by and large next week as well however because the Commercials would have to keep on augmenting their longs beneath the 1170$-1172$.

But if I’m wrong so the mighty Blue Arc resistance in the weekly time frame (at the same time currently the most important resistance of the year 2015) does achieve the generation of a strong negative momentum, gold may easily fall down to the 2015 Support Angle once more..

The 2015 Support Angle will reside at about 1158$ for the next 5 days. If gold really wants to target this angle in the course of next week, gold will be supposed to form the next important higher high in the weekly time frame closely below this main support (1157$-1152$).