Bomb impact in the FANG stocks - The possible retracement targets

On Friday after this year’s nth alltime high, the Tech sector which has been driving up the general market from November 2016, went into freefall, so we could watch the biggest one-day-sell-off since August 2015. The Tech sector seems to have ended its uptrend on Friday. The depth, the dynamic, the above-average Friday volume are suggesting now an imminent profound retracement of the 2017 rise.

Unambiguously it’s the Semiconductor Stocks, main drivers of the Tech rally that was hit hardest. Yet massively fleeced as well were the FANG stocks that form an important pillar of the secular bull market in the Tech sector:

Since many GUNNER24 Traders hold them and would care for trading them in the short term, I’d like to illuminate the FANG’s bull market state with the help of the monthly time frame today working out for you their possible retracement targets according to the motto BUY THE CRASH... NOT THE BUBBLE.

The following monthly charts utilize the secular bull market price-axis scales that are currently valid from my view! 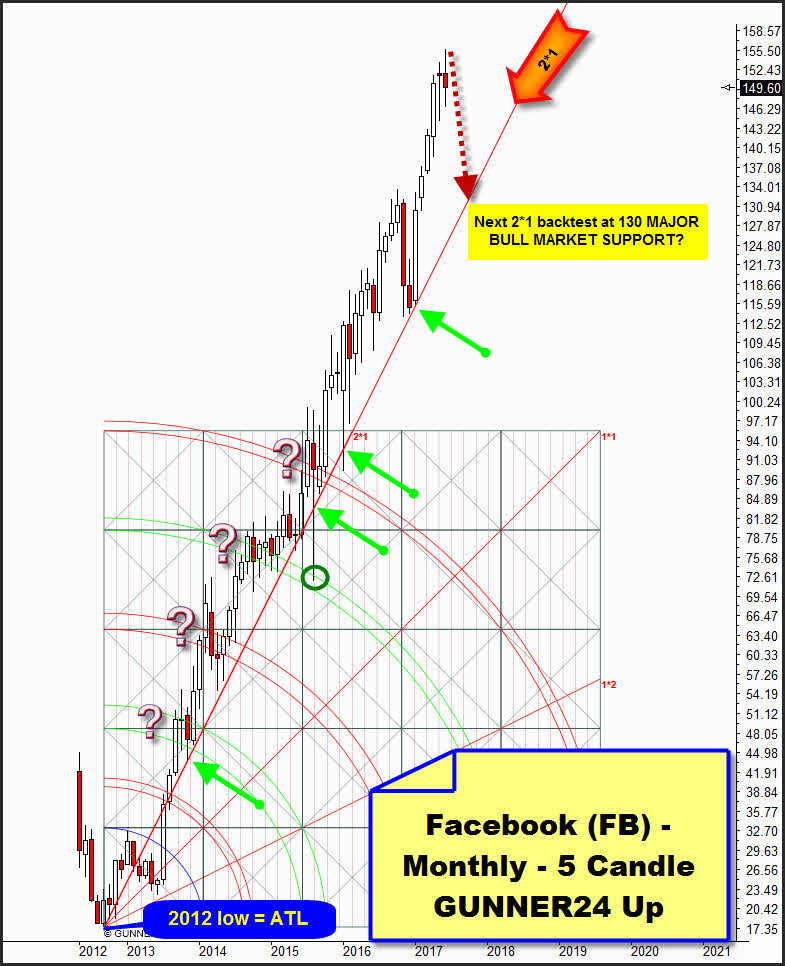 The FB bull market started just after the IPO at the final low of the year 2012 being the alltime low (ATL) at the same time. Out of the ATL, a first 5 Candle up impulse arose. After FB succeeded in breaking out of the first square upwards, FB rather oriented itself by the natural uptargets of the secular bull market in the course of the subsequent years than complying with them exactly, much less bouncing sharply from them. That’s why the queries are at the double arcs, the respectively most important bull market uptargets.

Somehow, the influence of the uptrend double arcs evermore led to a more or less prolonged pause in the uptrend (till the 1st double arc). So, when ultimately the magnet influence of a double arc was overcome, according to the rule it used to go up to the next higher double arc that could restrain the bull market but for a short time in each case.

Then, In the course of the year 2015, FB succeeded in leaving upwards the natural resistance that uses to be formed by the price top of the up setup.

At the light-green arrows, the very most important and strongest secular bull market support was tested successfully thus being cemented for the future. It’s matter of the important 2*1 Angle. That one was last pinpoint tested and newly confirmed at the 2017 low, the low of the month of January 2017.

In case a summer retracement newly succeeds in reaching and testing the 2*1 – at perhaps 130$ - this is where a super entry into longs will be!

==> I even dare to allege that a deep Tech stock retracement cycle will HAVE TO come to an end!!! as soon as FB newly quotes at the existing 2*1 BULL MARKET SUPPORT ANGLE.

==> If FB quotes at/close to 130$ within the 2017 summer months – it’s not only possible but likely, see the following chart on this – FB as well as the whole Tech sector will be supposed to have reach their final retracement low. Then, in succession up to da moon! 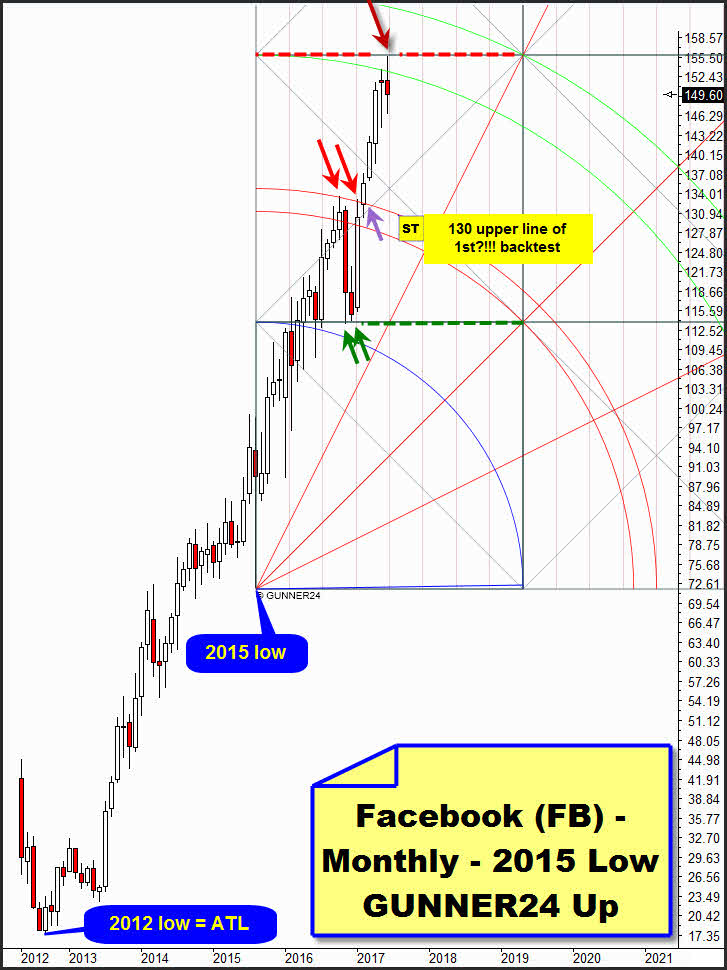 This likewise valid FB GUNNER24 Up Setup starts at the 2015 low. The monthly highs and lows, highlighted with the green and light-red arrows regard most exactly the natural important GUNNER24 Supports and Resistances.

The alltime high (ATH/dark-red arrow) attained on Friday spiked into the natural red dotted GUNNER24 Horizontal Resistance. Thereby, FB turned at a very important monthly resistance and a natural uptarget of this bull on Friday. Thus a retracement, maybe a very deep retracement, a correction in the strong uptrend is allowed to unfold coming weeks and months! 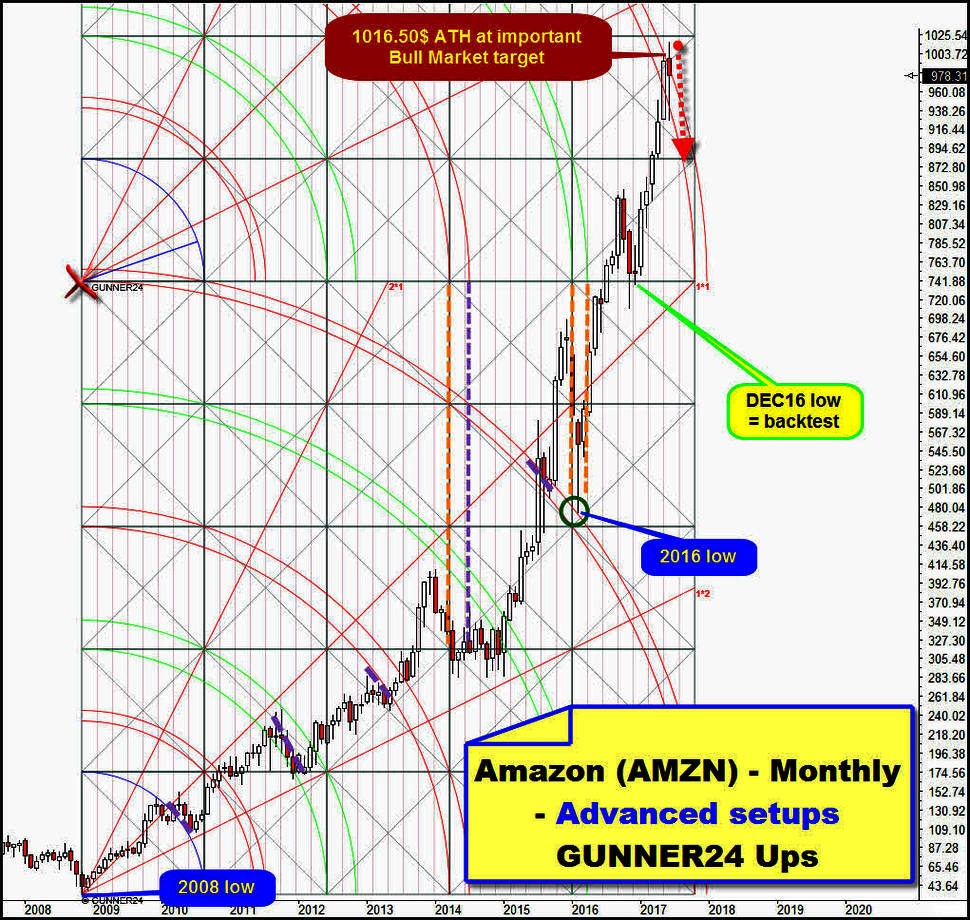 Above, you see an advanced technique we have to apply for the AMZN secular bull market to keep track. The secular bull market begins at the final 2008 low. The first important up impulse that developed after the 2008 bear market low we can pickup with the lower GUNNER24 Up Setup. This "lower" up setup we copy then one-to-one placing the setup copy at the X, the starting point of the lower setup according time and final point of the first setup according price. Therewith we duplicate and extrapolate the original setup according price.

Concerning the natural uptargets (double arcs), technically the lower original setup was regarded pretty well = the pullbacks/corrections in the uptrend at the relevant double arc uptargets are highlighted with the dotted purple lines.

The important 2016 low – an extremely bullish spike low! – tested pinpoint the upper line of the 5th double arc of the original setup from above, in succession the next secular bull market upleg started at the 2016 low could finally crack the naturally existing upmost price resistance of the original setup overcoming it upwards.

The months of November and December 2016 tested back again the final limit of the first up setup according price, for the last time at the reached December 2016 low (DEC16). ==> This month candle, the next rally leg arisen from this successful backtest topped into the natural double arc resistance of the 5th double arc put out by the extrapolated "upper" up setup.

Thus, also AMZN turned at a very important monthly resistance and a natural uptarget of this bull on Friday. A retracement, maybe a very deep retracement, correction in the strong uptrend is allowed thereby! = falling-red-dotted-arrow scenario. 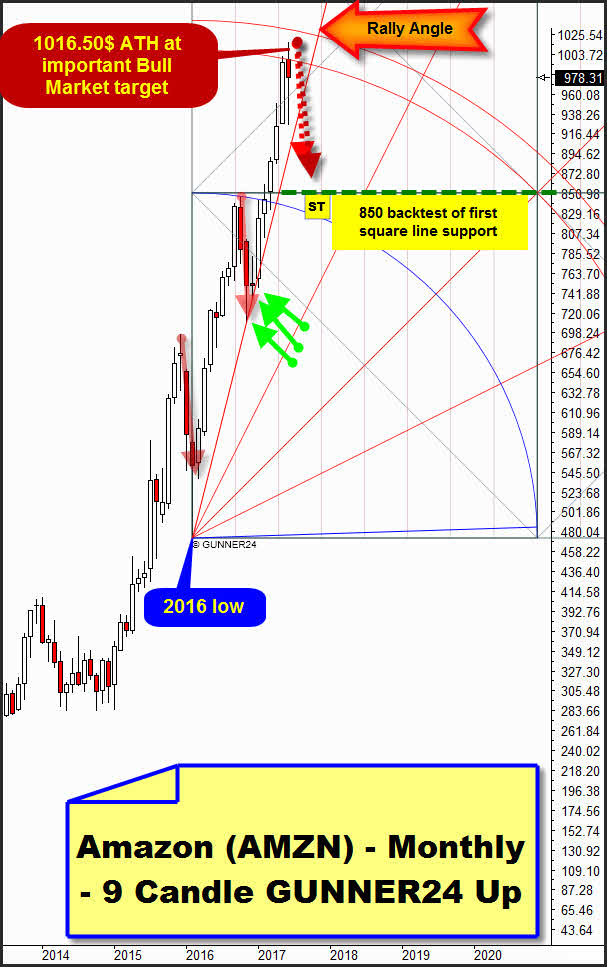 The fact that AMZN as well as Alphabet/Google (see the bottom) so to speak simultaneously reached the 1000 both showing now enormous effect to the 1000 also simultaneously, should technically mean that a deep Tech stock retracement is supposed to have begun on Friday.

Above, you see the likewise valid 9 Candle up starting at the 2016 low, very important secular bull market low. The new 1016.50$ ATH attained on Tuesday reached the natural resistance of the 1st double arc. The very strongest bull market support is the emphasized Rally Angle, last very successful and pinpoint tested at the three light-green arrows.

If AMZN wants to reflect vaguely both last pullback moves into the 2017 summer low, the summer retracement should be able to reach 880$-870$. Indeed it should within just 2 resp. 3 monthly candles. More classical would be a backtest of the 850$ however, now being very strong horizontal support in the monthly as well as in the yearly time frames. 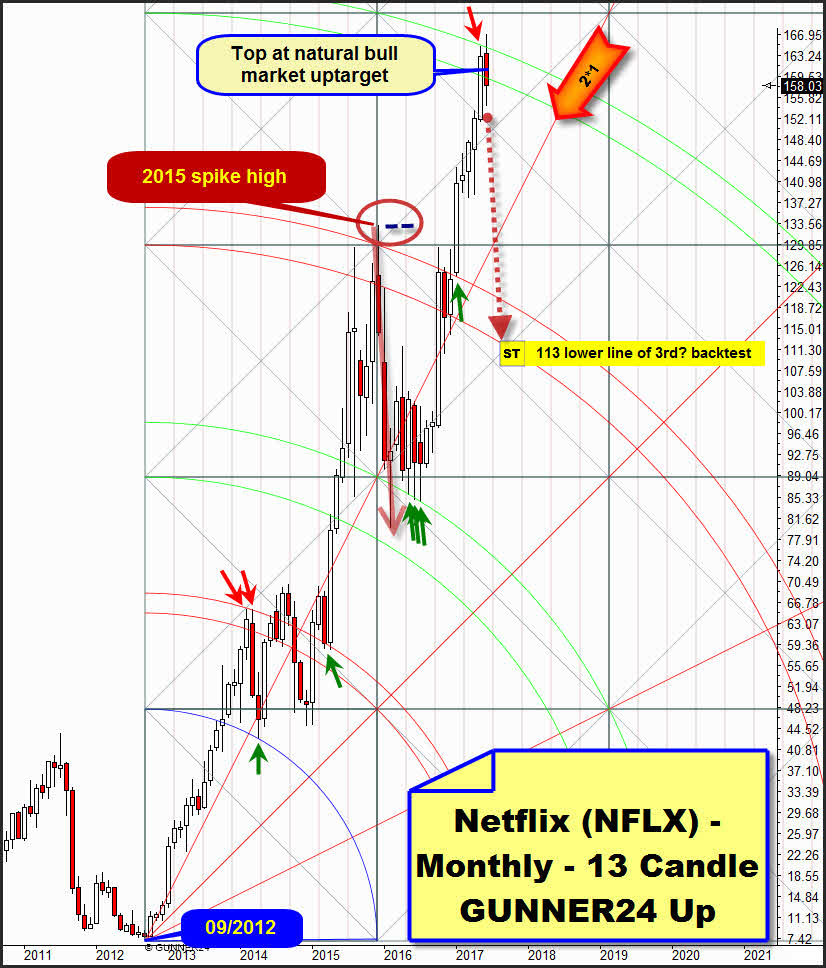 The Netflix bull market also starts at the September low of the year 2012. From there, a textbook 13 Fib number initial up impulse developed. NFLX is the best performing FANG stock of the last years. From 7$ up to the new ATH at 166.87$ within only 5 years, that’s yet fantastic.

As early as in May 2017, the bull market reached the important monthly resistance of the 4th double arc. Beginning on Friday and after the new ATH, also NFLX shows the full effect to this natural uptarget always being important resistance as well.

The last really important correction at NFLX began after the achieved 2015 spike high that had been inspired by the natural bull market resistance of the 3rd double arc. The deep retracement that had begun at the upper line of the 3rd tested back the former finally upwards broken support environment of the 2nd double arc deeply but most classically within only 3 month candles.

I have the strong sense that a 2017 retracement might develop about the same way the last retracement did! Deep and rapidly down in order to test back again in classic manner the 3rd double arc - though being a resistance with importance till 2016 – that had previously been taken upwards finally.

The uppermost green arrow at the upper line of the 3rd double arc marks the current 2017 low, reached in the month of January 2017.

Also in the further past, the lines of the individual double arcs plays an important part = red arrows, the other ones green arrows. Besides, maybe a summer retracement wants to reach the upper line of 3rd (important support magnet cause that’s where the 2017 low was made). And perhaps because thereby all the bulls would be brought to bay completely, a possible summer retracement even may/has to aim for the lower line of 3rd double arc. 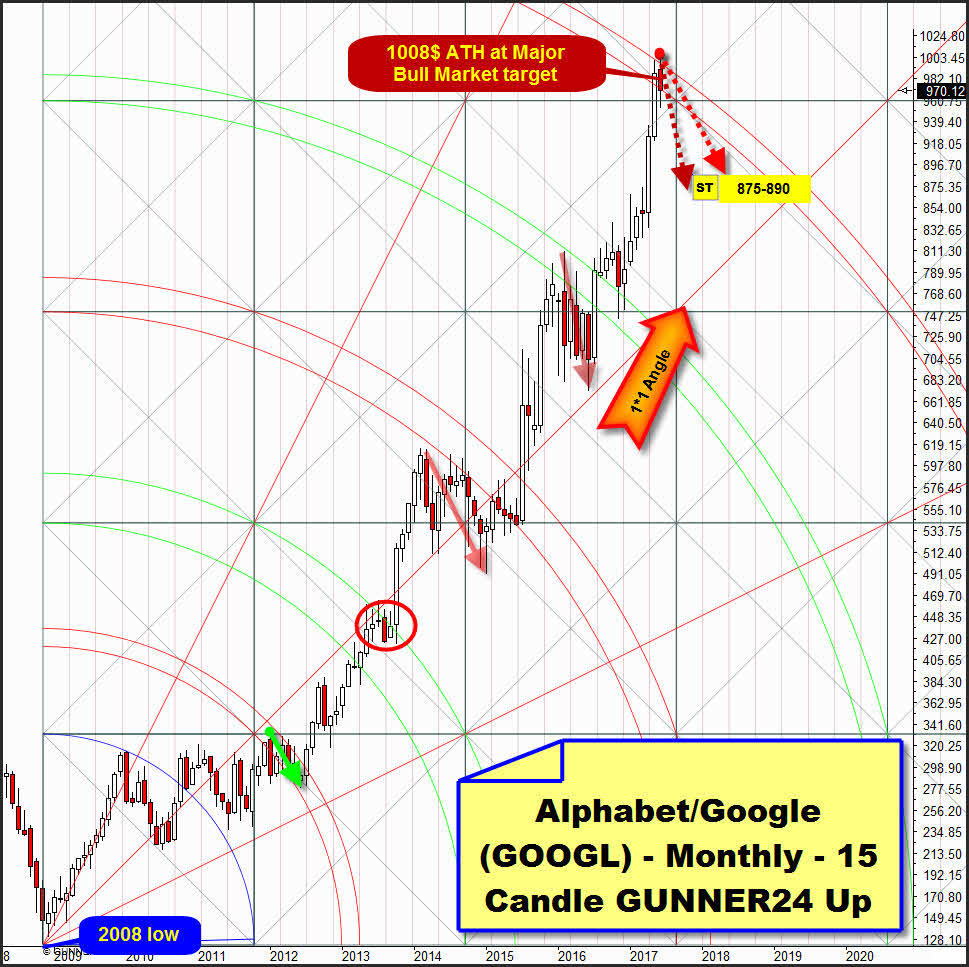 As mentioned already, in this secular bull market also Google/Alphabet reached the "round 1000$", important and naturally strong W.D. Gann number resistance. On Tuesday, a new ATH was attained at 1008$.

The last two deep retracements that were triggered then at the 3rd double arc resp. at the 4th double arc = red ghost arrows were about of equal depth according price. GOOGL might newly reflect both retracement moves now. Thus, the possible 2017 summer retracement is supposed to come to an end at about 875$ to 890$!

==> Simultaneously, all the FANG stocks reached and worked off important bull market uptargets, simultaneously being effected by these existing resistances!

==> Deep summer retracements at the FANG stocks are thereby not only allowed but even most likely now,