For a long time, copper has been considered as the most important instrument for diagnosing the global economic health. When copper goes lower, the world economy deflates. When the copper price is in an uptrend, the world economy is also supposed to be well, because it’s an inflation signal – as to a general rule.

The GUNNER24 Method is now signaling the threat of further hardship. Obliquely, that means an extreme tightening of the deflation spiral into the year 2016! 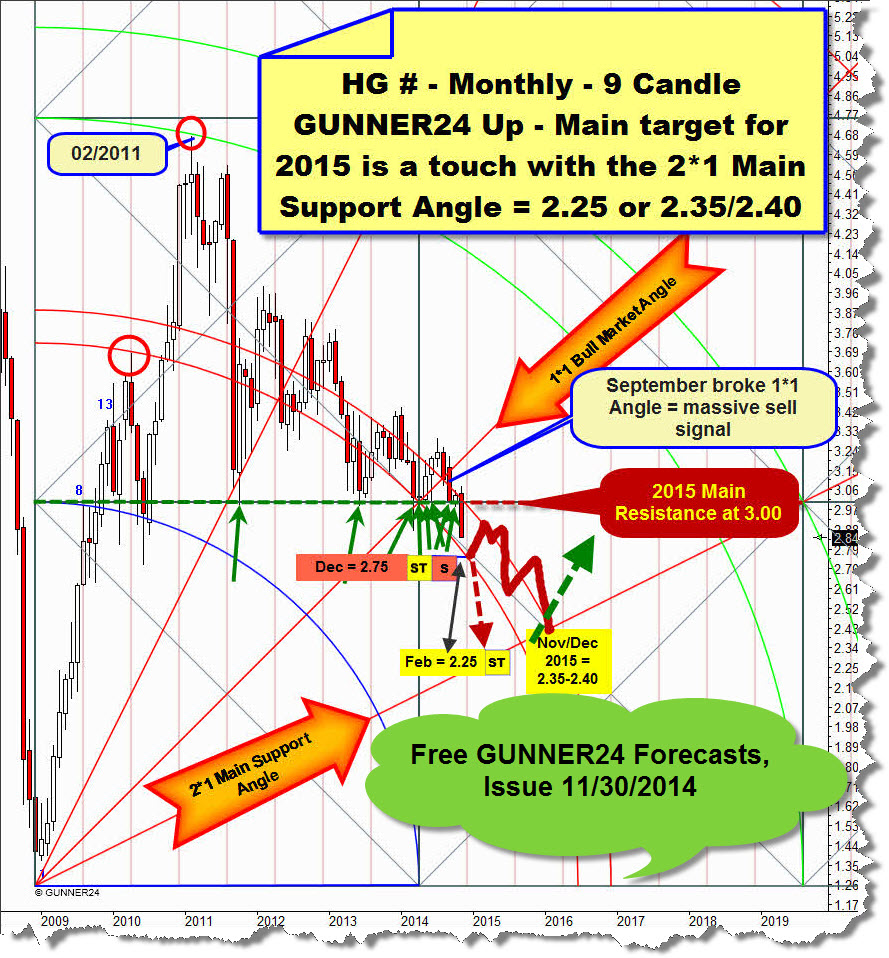 Above the state of the ruling 9 Candle GUNNER24 Up Setups in the monthly time frame by 11/30/2014. In the chart above, please mind as well the last monthly candle, November 2014 that aggravated again the downtrend because it delivered another powerful sell signal by the first square line support of the "round" 3.00$ being smashed sustainably.

For all the GUNNER24 Fans, here follows the derivation of the monthly support responsible for the January 2015 low. An angle that can be derived from the 2008 bear low as well, and anchored at the right edge of the ruling 9 Candle GUNNER24 Up Setup, in the very middle of the setup: 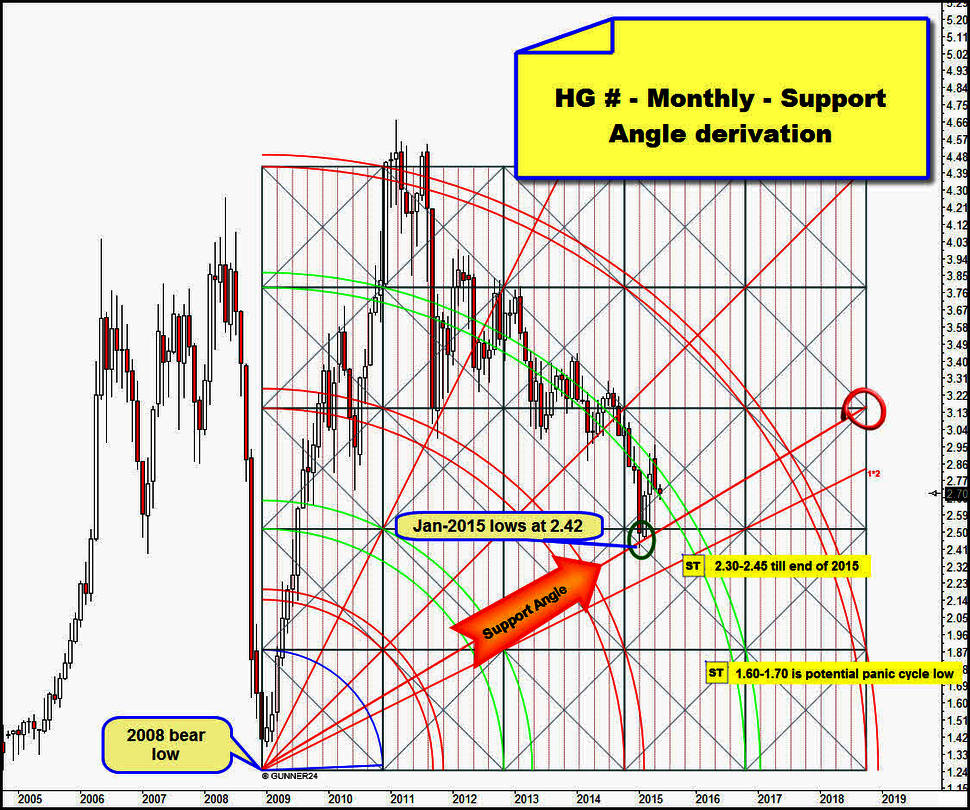 February 2015 opened narrowly above the Support Angle then. The February 2015 low was marked exactly at the Support Angle. Market was allowed/obliged to bounce… until last month, May 2015, the certainly next important lower high in the downtrend was marked. As foreseeable as early as last year, the resistance of the 1st double arc seems to be nearly insuperable also in 2015. At least on monthly closing base it does! 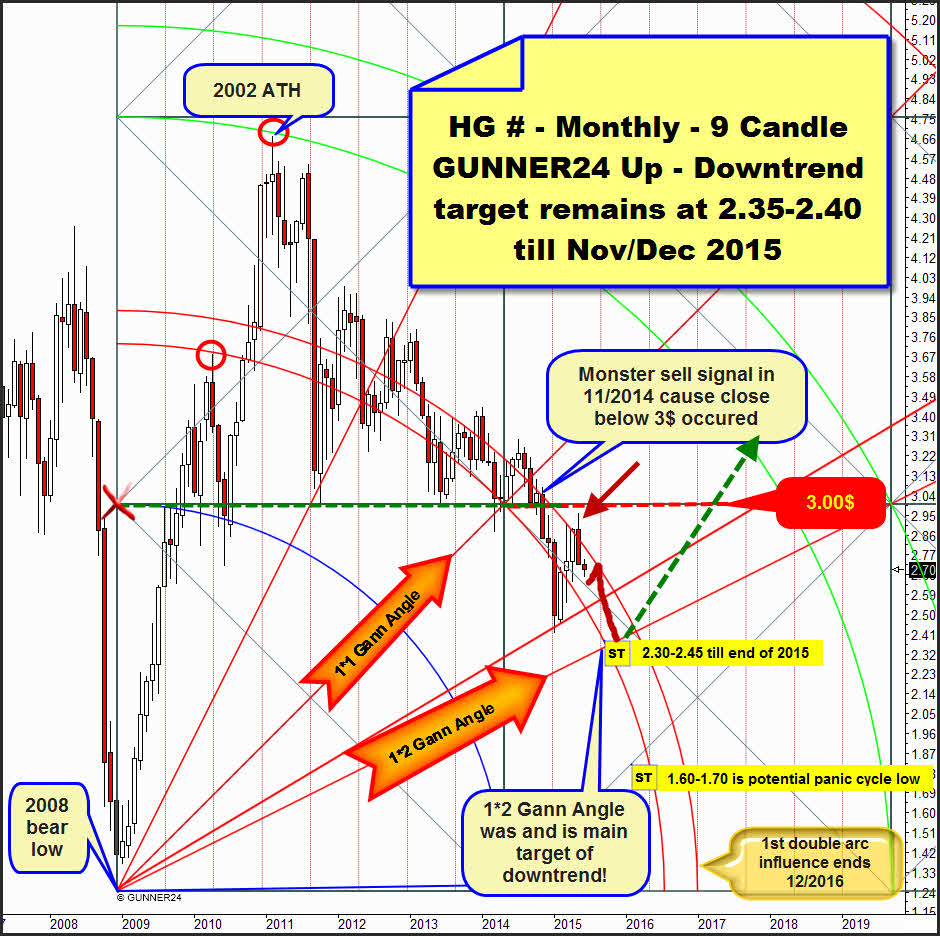 ==> May 2015 closed again within the lines of the 1st = negative, and the upper line of the 1st keeps on being the dominating monthly main resistance being supposed to force copper even to work off the main target of this downtrend, the 1*2 Gann Angle!

==> A touch with the 1*2 Gann Angle means the activated downtarget for this bear because in September 2014, the important 1*1 Gann Angle was broken finally on monthly closing base… one of the important Gann Angle trading rules established by W.D. Gann!

From the January low to the May high, we tell off 5 candles. Actually, copper bounced upwards for just 3 months however (01/26 to 05/06). The May 2015 high is likely to be matter of the half-year high, well, the absolute high of the year 2015, since either the 3 month bounce respectively the 5 candle bounce should mark an important turning point!

So, if copper wants to go on joining the 1st double arc downwards (probably!), that will have been all with rising copper quotations until the 1*2 Gann Angle will be worked off at 2.30-2.45, technically by the end of the year 2015…

Really, the 1*2 Gann Angle is the main downtarget for this bear copper being supposed to ascend towards the 2nd double arc after this obvious downtarget will be worked off for years, watch the green dotted arrow. But:

If a significant monthly close below the 1*2 Gann Angle takes place – it is possible according to the factor time because the resistance of the 1st double arc may last till at most the end of 2016… the upper line of the 1st won’t intersect the time axis before December 2016! – a further massive sell signal will be kicked off, being activated a so-called panic move that is likely to force Dr. Copper down to 1.60-1.70!

Let’s next consider Dr. Copper through the downtrend glasses with help of the 4 Candle down in the monthly time frame that can be applied at the 2002 ATH: 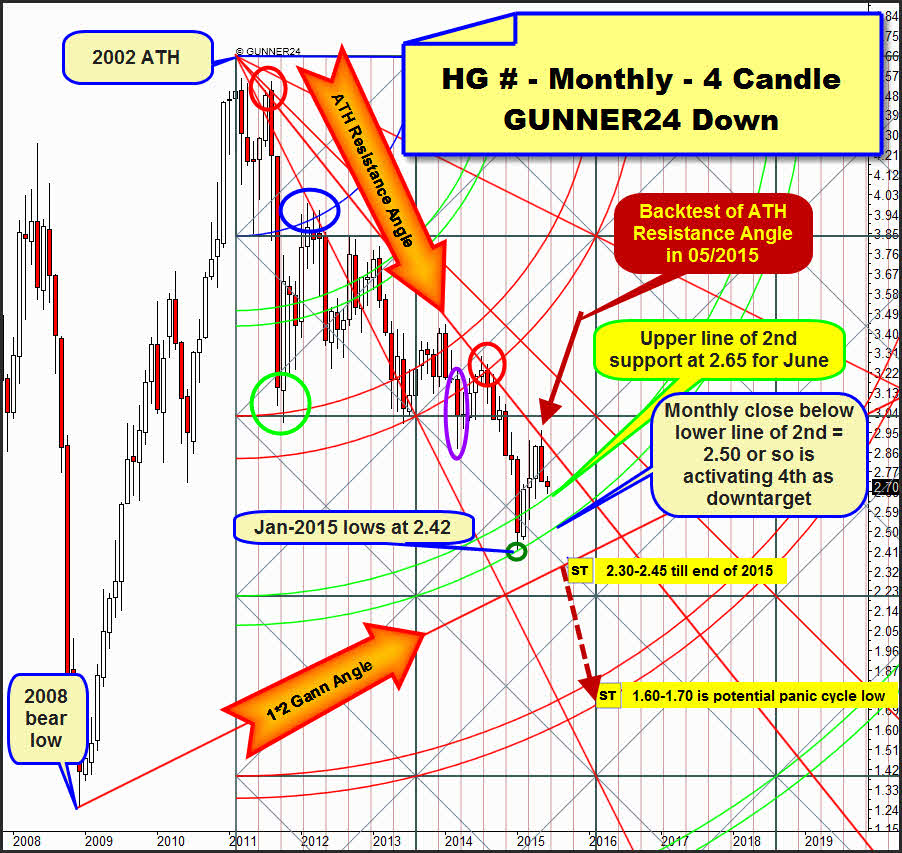 Since I haven’t ever published this setup, here at first a concise outline on what happened after the break of the first square line. Copper found an important low at the upper line of the 2nd double arc (light green circle). From there, copper bounced back to the resistance of the Blue Arc (watch the blue oval). Together with the 2*1 Angle, this one was an important resistance on monthly closing base being tested as many as 4 consecutive monthly highs. That’s where thereby the second important lower high of this bear was cemented.

Afterwards, copper fell down again below the 1st, bounced back to the first square line, from 2013 on the 2nd double arc being tested intensely. This one broke finally at the beginning of 2014 at the purple oval… thus the next lower double arc was activated as the next important downtarget in trend direction.

This target was worked off exactly at the January 2015 low, watch the small dark green oval on this!

So far, so good, the January 2015 low is working off the extremely important double arc support. The bounce from the January 2015 low found resistance at the extremely strong ATH Resistance Angle however - watch the red arrow. This Resistance Angle could never be overcome during the entire bear market, on this watch both red ovals. The first time this ATH Resistance Angle was tested was beginning of 2011, hence at the beginning of the bear market. That’s where the very first important lower countertrend high of this bear was brought in!

Also May 2015 found resistance at the Resistance Angle derived from alltime-highs with the monthly high, after all. Now, copper is heading for the upper line of the 3rd double arc again! This support arc takes course at 2.65 for the current month. It must be feared that – because of the presently existing bouncing energy from the ATH Resistance Angle – June 2015 will close below the 2.65. IF this happens, copper will newly have confirmed that the 1*2 Gann Angle will be headed for at 2.35-2.45 till year-end.

Just pay attention to the lower line of the 3rd. ==> this strong support takes course at round about 2.50 for 2015. Yet a final monthly close below this 2.50 = final close below the 3rd double arc will technically activate the next lower double arc in trend direction according to the GUNNER24 Trading Rules = upper line of the 4th double arc!

==> I think a brutally quick and hard sell-off down to the region of the 4th double arc will happen if the 1*2 Gann Angle – coming from the 2008 bear low on monthly closing base – does not hold.

==> Unless the 2.65 MUST hold in June and/or July 2015 on monthly closing base, the big danger will be threatening that – starting from the May 2015 high – the next powerful selling wave in copper has begun so in an extreme case the 1.60-1.70 may have worked off until the beginning of 2016!

==> If the 2.65 holds on monthly closing base in June and/or in July 2015, copper will be likely to bounce again into the resistance of the ATH Resistance Angle till about August 2015 until afterwards the next important selling wave will lead the market to the 2.30-2.45 main downtarget till the end of 2015 from there on.