Even in comparison to the currently mostly leading stock-market index, the NASDAQ-100, palladium succeeds in shining.

The reason for the inner strength of palladium is to be defined very easily.

With the slightly booming or pretty stable world economy, the demand is higher than the supply. The inventories are shrinking. There is shortage in delivery. And we`ll have worked out the fundamental reasons for a fine uptrend started at the January 2016 llow that was next important higher low in the yearly time frame: 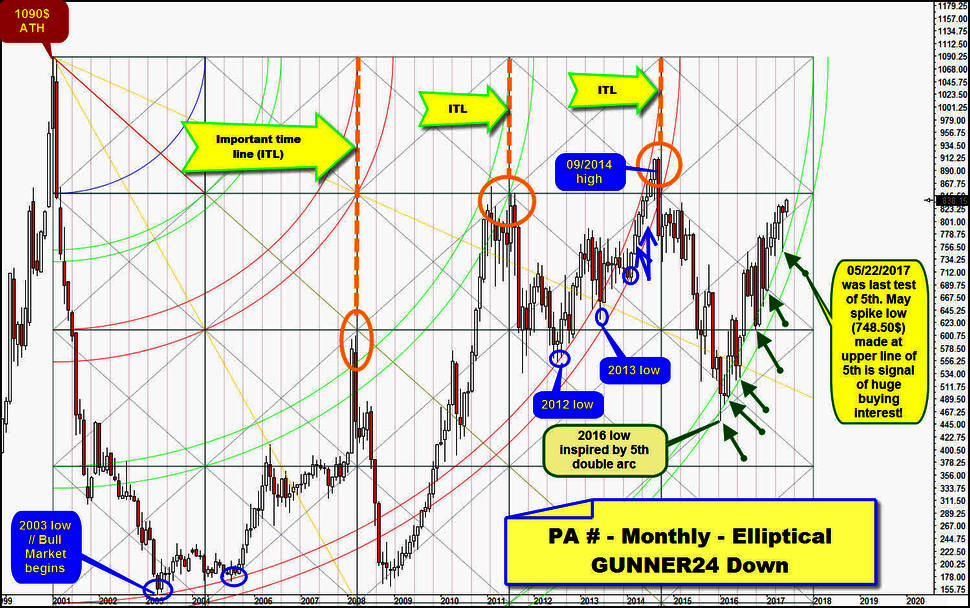 In terms of the time factor, not before December 2017 resp. January 2018 I expect palladium to find its next important bull market high. Thereby, as happened in 2016 already, in 2017 again palladium is supposed to perform magic on the pit with an abundantly clear uptrend year (= year low near open/year highs near close)!

I reach this assessment because it’s obvious that palladium – uncovered with the advanced GUNNER24 Technique applied in the monthly chart above – is driven upwards again by a support double arc, at least through year end 2017.

It’s matter of a support double arc that is only visible with an elliptical down setup starting at the 1090$ alltime high. The elliptical GUNNER24 Down Setup in the monthly time frame doesn’t come down to a by-the-book measurement of the first initial impulse, but it just depends on whether we can identify somewhere/somehow double arcs at which some important monthly resp. yearly lows are being marked.

The first time the 4th double arc identifiable in the variant supported PA # was at the final 2003 low, the beginning of the current bull market, then once more at the final 2005 low, then again - much later – at the absolute 2012 low, the final 2013 low as well as at the absolute 2014 low. All these important higher bull market lows are highlighted with the blue ovals. Beginning at the 2012 low and reasoned by the steeper and steeper ascending bull market support of the 4th double arc (blue arrows), the last important several year bull market upleg unfolded before the current several year bull market upleg.

Ultimately, at the 09/2014 top, the last important higher bull market high the overall 4th double arc support influence exhausted after about 11.5 years. Once the support of the 4th double arc ended/expired, palladium fell into a deep hole, lost more than 50% into the final 2016 spike low that was inspired by the naturally existing support of the 5th double arc.

The very last test of the 5th double arc (= uppermost fat green arrow) took place on May 22. That’s where the final May 2017 low was brought in, exactly at the upper line of the 5th support. The May 2017 low is obviously matter of a spike low, that uses to reflect strong buying interest. Since May-22-2017, palladium succeeded in putting on almost 100$ before it closed at the new 2017 high on Friday!

I’m going to show you the monthly chart above incl. elliptical GUNNER24 Down Setup once again now. However, in succession we’ll put our minds on the past important bull market highs that came in at important time lines (ITL). That helps us to limit resp. define the presumable high of the current bull market run concerning the time factor: 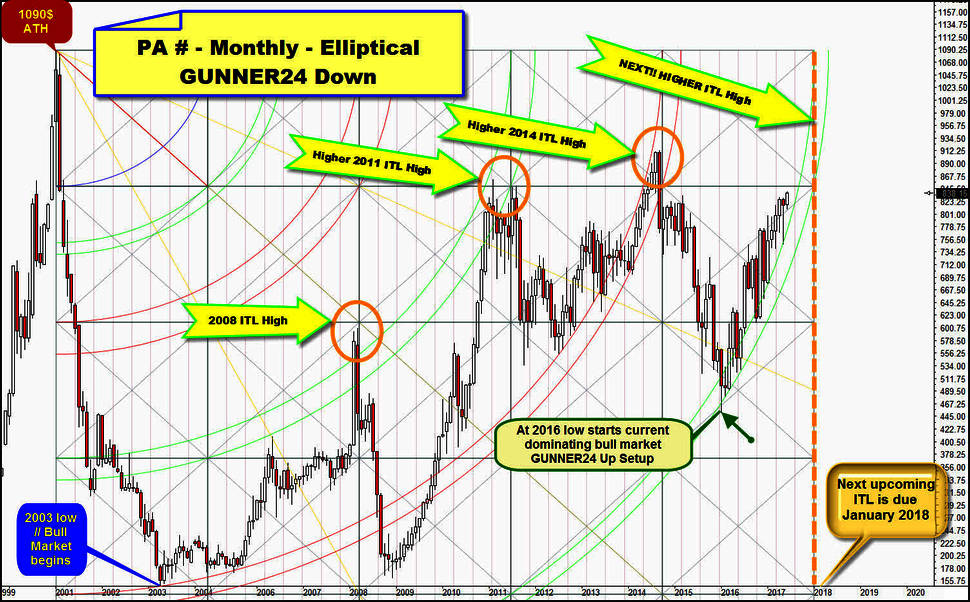 It’s in evidence that the past important bull market highs of the years 2008, 2011 and 2014 were always made each rather exactly at important time lines (ITL). Indeed at those ITLs that represent the transition from one rectangle to the next according time.

The first important high of the secular bull market initiated at the 2003 low was the final 2008 high that likewise meant another negative test of the 2nd double arc then. The 2008 bull market high was inspired by just the ITL that marks the transition from the second to the third rectangle according time.

The next higher bull market high, final high of the year 2011 was indeed brought in shortly before the ITL that signals the transition from the third to the fourth rectangle. Yet just that ITL gave a turning signal all the same, since it was situated where an important lower monthly high turned up which meant the timing signal for the decline into the 4th double arc downtarget.

Finally, at the transition from the fourth to the fifth rectangle according time the next higher 2014 bull market high was notified!

Thus we found/identified a timing indicator that worked dandy for the past, so why not also now resp. for the near future? It looks as if palladium – still parabolic – will have to boom till the next reachable ITL! This next reachable ITL signals the end of the setup according to time! taking its course exactly at the January 2018 candle!

==> Technically, palladium should have to be supported bullish till year-end, indeed by the rising and higher pushing support of the 5th double arc. Possibly, in December 2017 resp. in January 2018 palladium will make its next important bull market high in the secular bull market!

In conclusion of this palladium analysis, let’s focus to the most different price targets of the current bull market – in the short term, but also in respect of the possible final December 2017/January 2018 top! For this, we apply the currently dominating monthly 8 Candle GUNNER24 Up Setup at the final 2016 low which was important next higher secular bull market low: 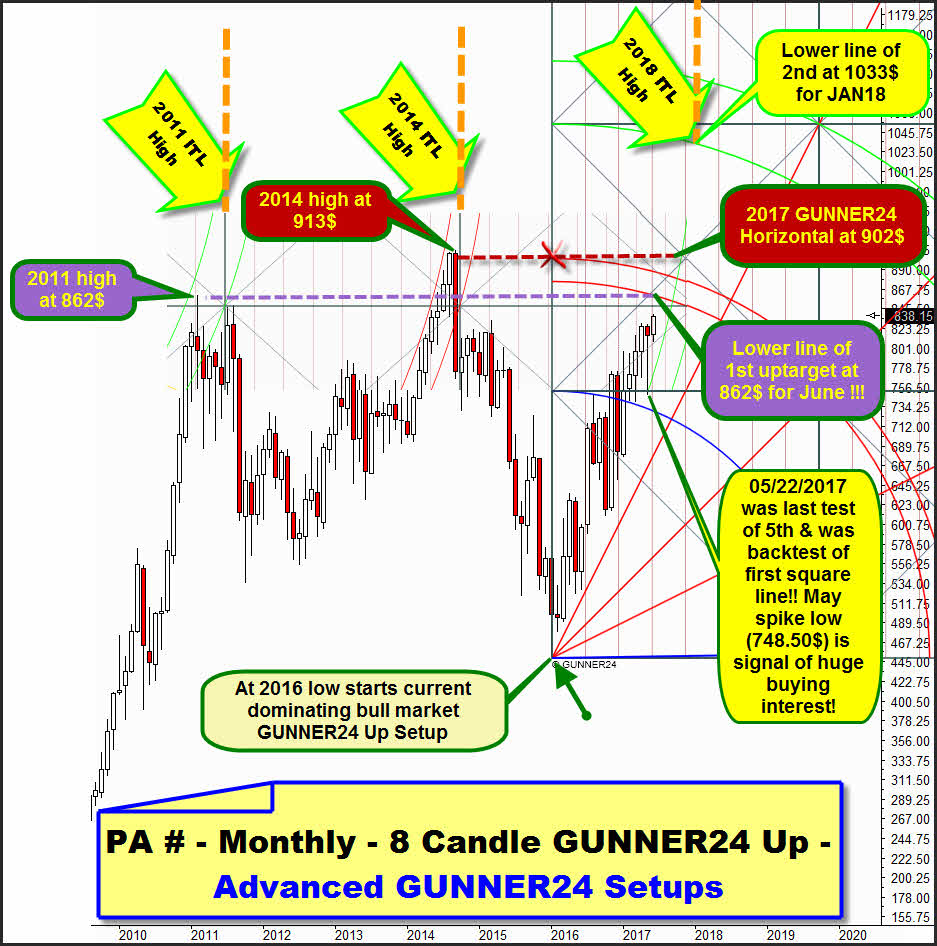 I’d like to start the price analysis at the May 2017 spike low that did not only pinpoint test the major bull market support of the upper line of the 5th double arc support - in detail commented on further up, but also tested back with success rather exactly the first square line support in the dominating monthly 8 Candle up depicted here above.

==> Thereby, the May 2017 spike low tested back with extreme success a strong combined monthly & yearly support magnet. That’s why the rally beginning at the May-22 spike low is so mightily strong. Concretely, this means now that palladium will reach the lower line of the 1st double arc uptarget in the monthly 8 Candle up very swiftly and probably within a couple of trading days:

==> I think, palladium will be able to reach the lower line 1st upmagnet within 7 trading days. For the June 2017 candle, the lower line of the 1st is at 862$! PA # will thereby test the 2011 high environment within a few days!

Well, from the 862$ a multi-year resistance zone begins stretching from the 2011 high up to the higher 2014 bull market high = 862$ till 913$ is major upmagnet for this bull market and at the same time major resistance area. Since the current bull market cycle – as described further up – features parabolic characteristics being very young the most recent daily and weekly uptrends according time (May-22 important low…), technically PA # should have to be able to test the upper edge of the 862$-913$ multi-year resistance zone. I think, the present weekly upcycle should be able to test/work off at least the "round" 900$ Gann number resp. the natural 902$-GUNNER24 Horizontal Resistance.

Whether the 913$ 2014 important bull market high environment can be reached resp. exceeded in this weekly upcycle (till July 2017 or so), is what I’m not capable of saying. Yet, if this happens we’d have a very first indication that the lower line of the 2nd double arc uptarget – at 1033$ for the January 2018 candle – is the most important cause most attractive uptarget for the current bull run.

==> IN ANY CASE, each monthly close above 900$ in the summer months 2017 = clear and decisive close above the 1st double arc within the monthly 8 Candle GUNNER24 Up will be an unambiguous evidence that the lower line of the 2nd double arc is willing to be be reached in current bull run and until December 2017/January 2018.