While in Europe the conventional mass media are concentrated in preparing the coming mega-events as the European soccer championship, the Olympics and Germany’s Next top model or reporting on the 60th throne anniversary of the Queen – in the web things start happening very fast in many internet media with all those self-styled finance journalists, and even the most reputable finance experts and analysts go head over heels producing their horror messages concerning the Euro crisis.

Just in the web – according to my considerations – the whole inability and powerlessness of the bankers, the Eurocrats and the politicians with respect to overcome the actual Euro-economy crisis is becoming manifest. There are too many fronts where the Peters-principle-careerists, lawyers, school-grandmasters and physicists are industriously forming their economical Gordian knots that can only be resolved by drastic measures, according to the legend. The politicians of the different nations are insulting each other. The bankers want to outplay the politicians who believe that everybody is trying to sell them a pup. Or they’re just thinking of their next lecture tour or board meeting…

It’s interesting that now – the way it should be – the people of the different effected nations seize more and more control voting by their feet and – aware or unconsciously – are trying to resolve that Gordian knot. The time they’re having is too hard, they’re afraid of poverty, unemployment being fed up to the back teeth with so much incompetence.

Where this spiral is going to – only God knows and the scare tacticians and the self-styled analysts do. But for several weeks it has become more and more obvious what the big business does.

According to the motto "where there’s smoke there’s fire" they extensively withdraw capital from Europe taking refuge largely in T-Bonds and the US$. Partially they accept now negative real-yields!! Fear rules!

The main thing is to get out of everything labeled Europe. The venturesome big financiers are going to speculate on the expectation that the USA will not likewise slip into the recession, entering soon into the US stock markets therefore. Some BRIC countries and gold miners are important safe havens, and gold is supposed to become very interesting again, soon. But it is not the yield point of view – the big business disregard gold because it doesn’t produce interests you know - it’s just the security factor… if the political situation in Europe goes on coming to a head, the recession extends to some more important Euro countries and if the fear of losing their savings bubbles up in the Krauts (called German Michel) as well, gold will be about the only asset in this world that may quintuple in a short period.

As expected the index is heading for the important target area of 1250 now, narrowly under 1250 the market is supposed to turn upwards, at first labored, then severely: 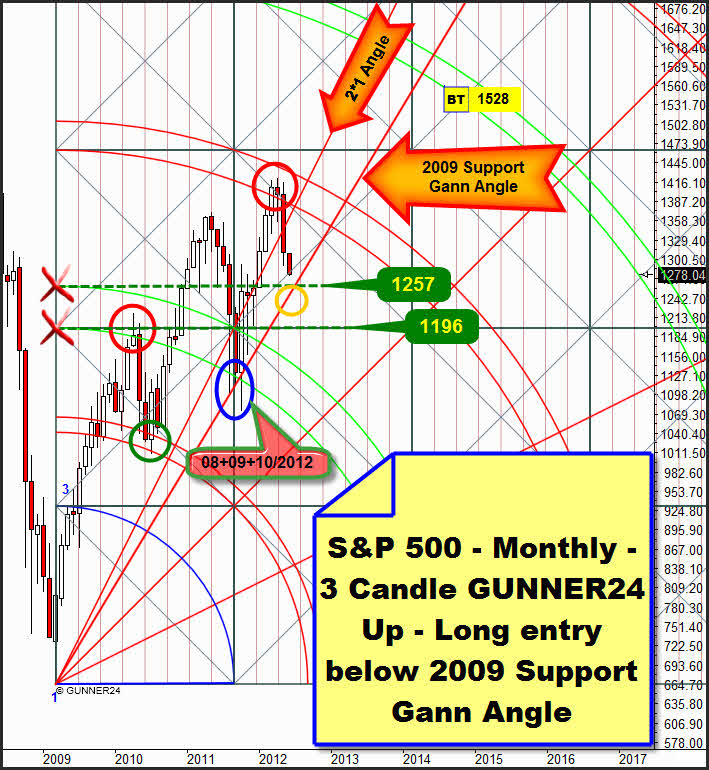 The target area was and keeps being the 2009 support Gann Angle that backed the market in the months of August through October 2011. Starting from the actual momentum and from the knowledge that just a little panic would mark an important low we’ll adjust our scheduled long-entry to 1228: 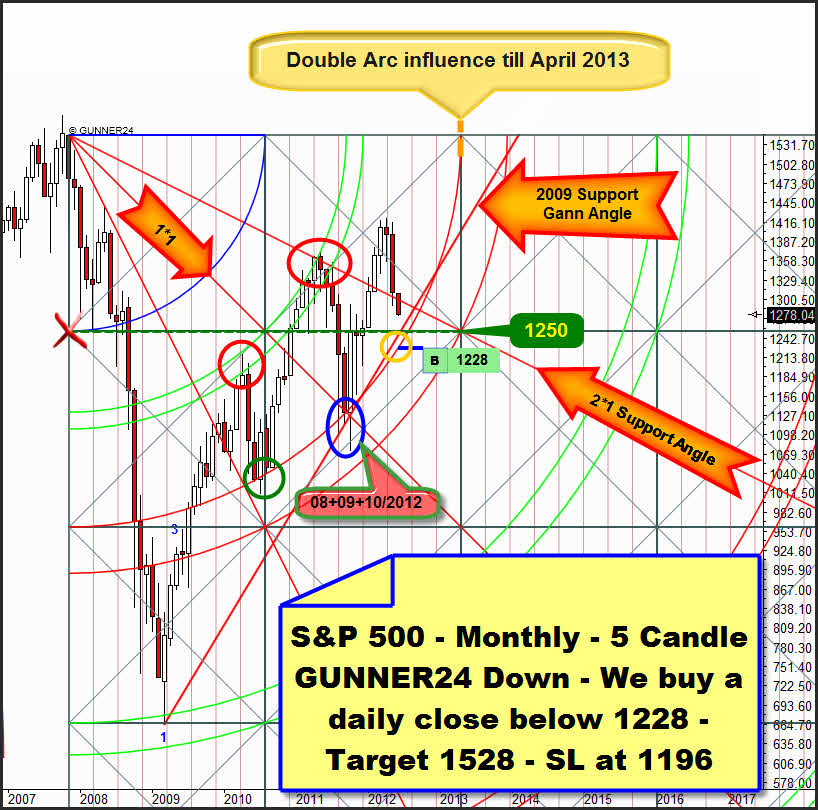 Now I’m working on the assumption that June is going to dip below the 2009 support Gann Angle into the 2nd double arc, just like it happened at the green circle and the blue oval already. The reason is the development of last Friday. That’s where the monthly 2*1 support Gann Angle was broken that for June is passing at 1297, also considering the lost motion. That fact makes the trend on daily basis accelerate now (the momentum of the down move is growing now…). Panic mode is "ON"! Any larger recuperation on daily basis is supposed to end at 1297-1300 since the 2*1 represents an important monthly resistance.

As mentioned we’ll buy a daily position in case of a daily closing price below 1228 since the 2nd double arc combined with the 2009 Gann Angle are expected to provide a very, very strong support on monthly basis. SL is a daily close below 1196 which is the important horizontal support in the monthly 3 Candle GUNNER24 Up Setup.

Then the market is expected to go up from the 2nd double arc to 1528 in April 2013. We’ll have to wait and see which occurrence will ring in the turn "officially" within the coming two weeks: Is it that the FED will be forced to let QE3 start after the bad figures of Friday – that’s what a very, very big number of noted US finance experts have worked out – or that the Greece elections produce the strike of escape one way or another.

In all that chaos of news and opinions on the Euro sphere only one piece of news made me sit up and take notice last week: During the last weeks the Italians withdrew an average cash of 3000€ a day per head. Since we know that there isn’t more than 2000€ of printed money available at all per European head I consider the Italian withdrawal as very high and a little alarming.

Adding now simply the fact that there has been a violent withdrawal for months in Greece and for weeks in Spain and connecting that with the rarely discussed and hardly known fact that Europe was shortly before the closure of all the ATMs as early as in September 2008 (panic-struck the London bankers called their wives to have them withdraw money before the closure) I can say this is the people’s voting by their feet that should force the Eurocrats to act.

The European bank run is what the Eurocrats are really afraid of. That’s why this subject is never going to be the big topic in the European mass media. There’s too much fear of an extensive fire.

Whether or not the chaos will occur is absolutely open, and that is why gold doesn’t fall like the other commodities. In the actual deflationary surroundings it is the insurance against everything conceivable and unconceivable. In Euro terms gold is expected to produce a new all-time high within the next two weeks. Therefore sooner or later gold will have to follow in dollar terms. Also measured in US$ it will have to climb to the old heights.

It’s not the greed that makes gold rise, but it is the fear of the crowds combined with a constant loss of all the paper currencies in this world. In Europe fear and monetary devaluation are big enough already, that’s why in Euro terms gold is near the all-time high.

The possession of physical gold means constant security and conservation of the purchasing power compared with the paper currency, with every transition currency of any kind or any thinkable voucher system. It’s been like this for millenniums, and with an ounce of gold you will always be able to buy a presentable man’s suit…

…And as mentioned all above – just in case – it may quintuple overnight. Physical or paper gold may.

But still we’re far from that. Still we’ll have to read and interpret the charts that look like this:

Almost the whole month of May 2012 gold was subject to the deflationary tendencies of the global economics, it was treated like a quite normal commodity. With the lows of 05/16 (1529.30 for the actual contract) gold began to uncouple from the US$. It maintained its positionwhile the dollar kept on rising. The May close was exactly above an important new support Gann Angle in the pretty short-term monthly 8 Candle GUNNER24 Up: 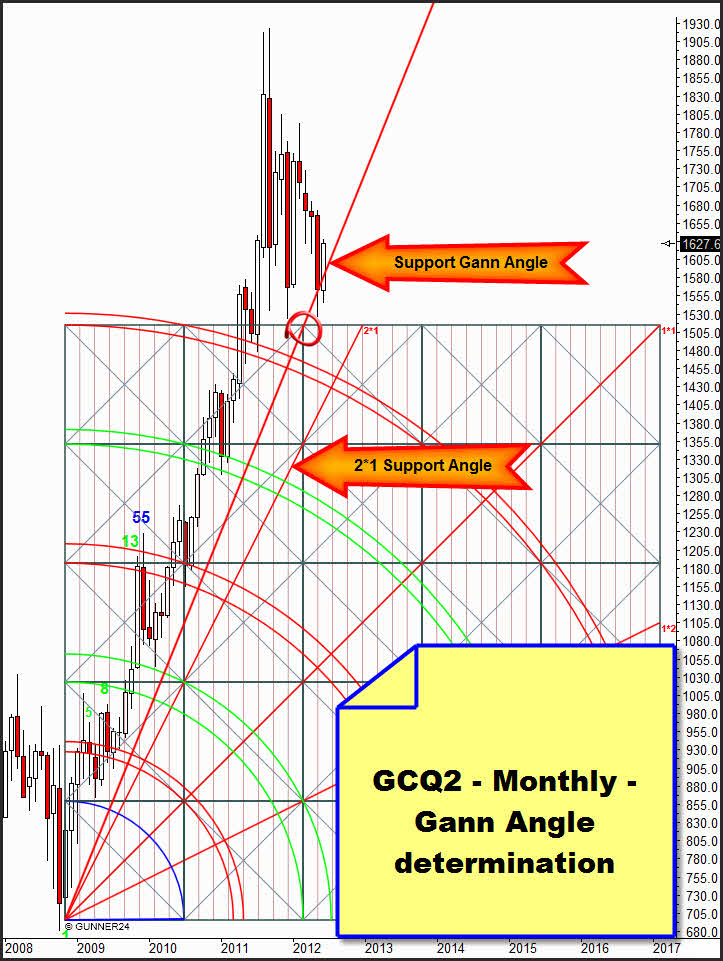 At first we fix the setup at the low of the 11/2008 (green 1) candle drawing it a little bit to the right above in order to enable us to anchor the new important support Gann Angle above at the transition from the second to the third square. Then we put the blue arc at the top of the 06/2011 (green 8) candle. Thus the finished monthly 8 candle up setup is looking like this: 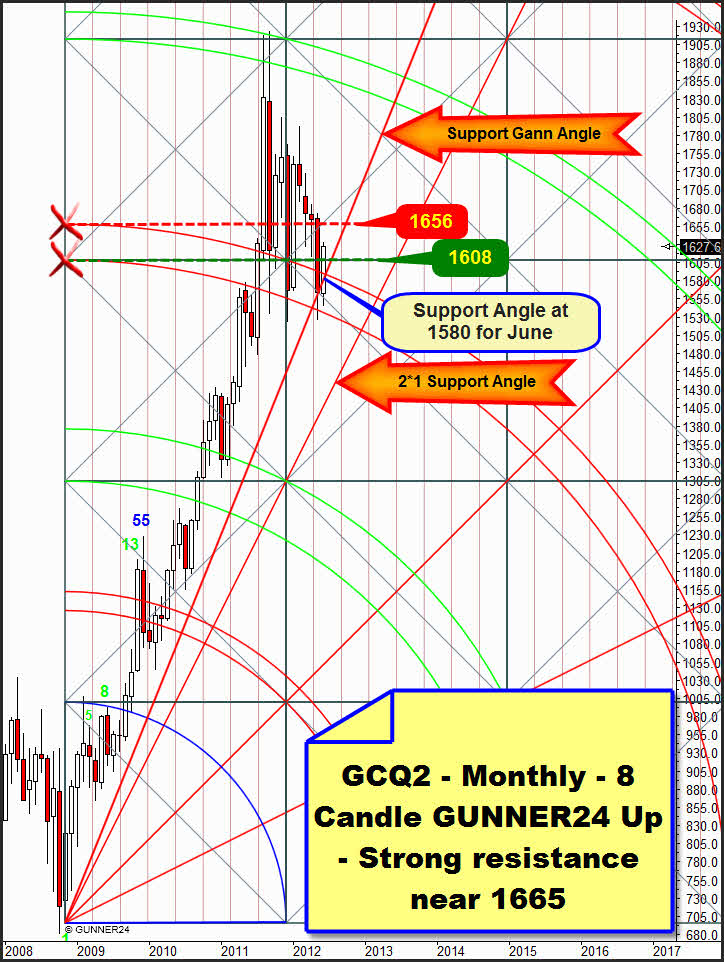 We see that gold is being kept by the 3rd double arc like it was in December 2011 already. For the second time in May 2012 it closes within the 3rd double arc that therewith confirms it support function. But the fact that gold newly closed within the lines of the 3rd demonstrates us the existence of a mighty down pressure. Now to the performance of the June candle at the support Gann Angle: Strong! Being optically visible just by the first trading day in June the rebound confirms that the support Gann Angle has developed a strong rebound effect being able to mutate to a strong monthly support. The existing momentum is supposed to be able to drive gold up to 1656 and a little higher. There, at 1656 the next important monthly resistance is lying. Technically gold shouldn’t be able to overcome this resistance in June. This strong horizontal resistance wouldn’t be overcome before a weekly close above 1670 in June 2012. The result would be that gold would safely have to head for the 4th double arc in the next months. About 1810.

If the 1570 breaks in June persistently on daily basis (daily close below 1560) the 1530 will newly have to be tested. In succession they will have to break, so we might expect about 1460-1450 as early as in June 2012. I really work on the assumption however that the deflationary tendencies will not newly prevail before the end of June/beginning of July. So the final lows of this correction in the uptrend are not expected to show before September 2012: 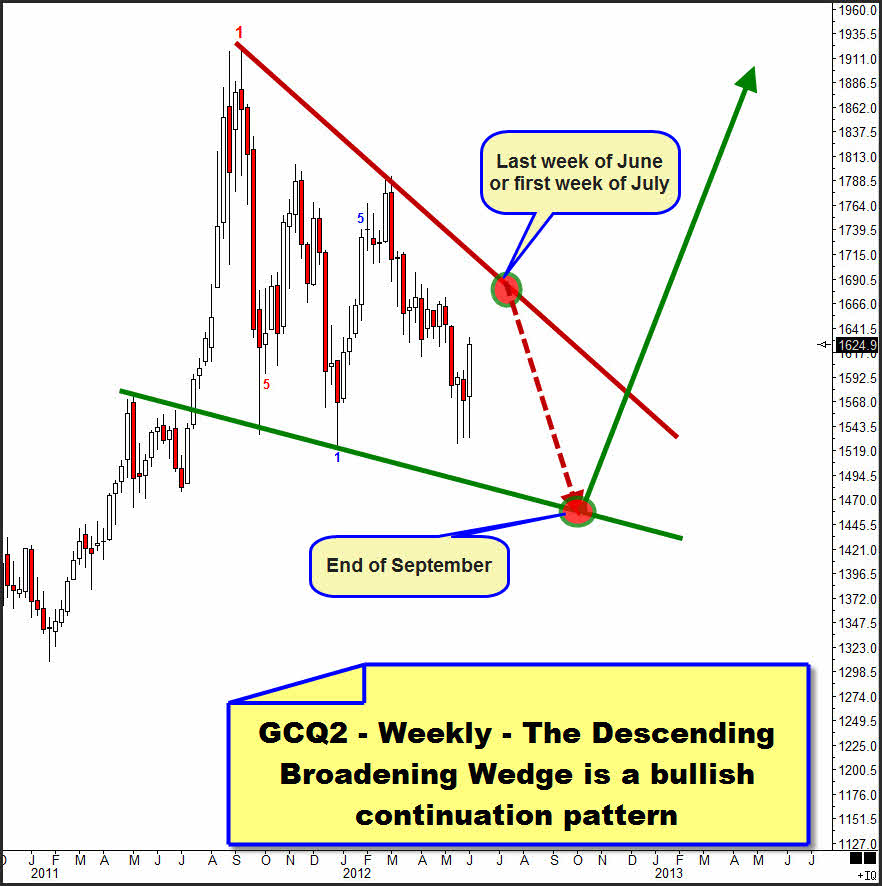 Probably gold is working on this mighty Broadening Wedge that now allows another approach to reach the resistance trendline. The touch with the resistance trendline should occur in three to four weeks in the ideal case. The following decline is expected to proceed newly very painfully for all the gold bugs. As the ideal case gold will find its way back at just marginally lower lows, about 1430, that will mean twelve months of correction then, climbing to new heights afterwards – even in dollar terms.

If gold reaches the upper trendline within the next two weeks (at about 1690 then) it will be pretty unlikely that the chart pattern above keeps being valid! A tight march through, up to the 1800 would be more likely in that case.