On the likely development of the currency pair EUR/USD in 2015, I released an extensive forecast at the beginning of the year. Then, for the year 2015, the pair was supposed to turn in a flawless downtrend year being presumed at least the parity to occur in 2015. Well, now the pair is expected – if not most likely to go even much lower, to round about 0.90. Whether or not this target threatens to be worked off as early as in 2015, you will read today.

The currency pair is in a panic move that is likely to last 21 +/- 1 months. The panic move started in 2014, at the top of the month of May, marked with # 1 in the following chart: 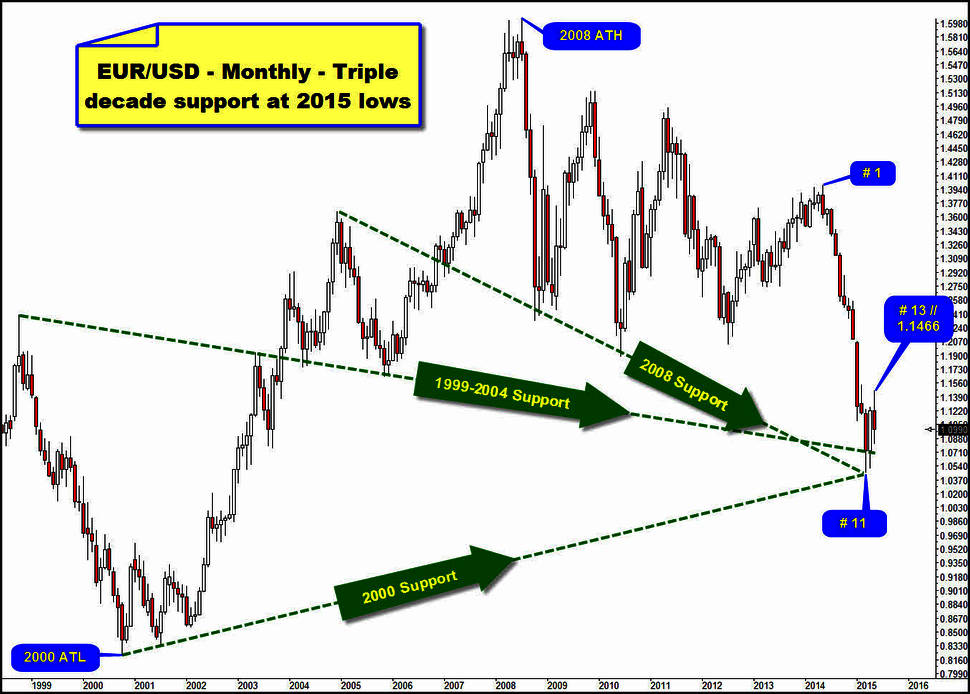 A preliminary stop for the selling wave was set by the current low of the year 2015 (March), after altogether 11 candles = # 11.

Furthermore, the first sell-off wave that counted 11 candles recovered itself at an important elliptical support that concurrently was a decade support: 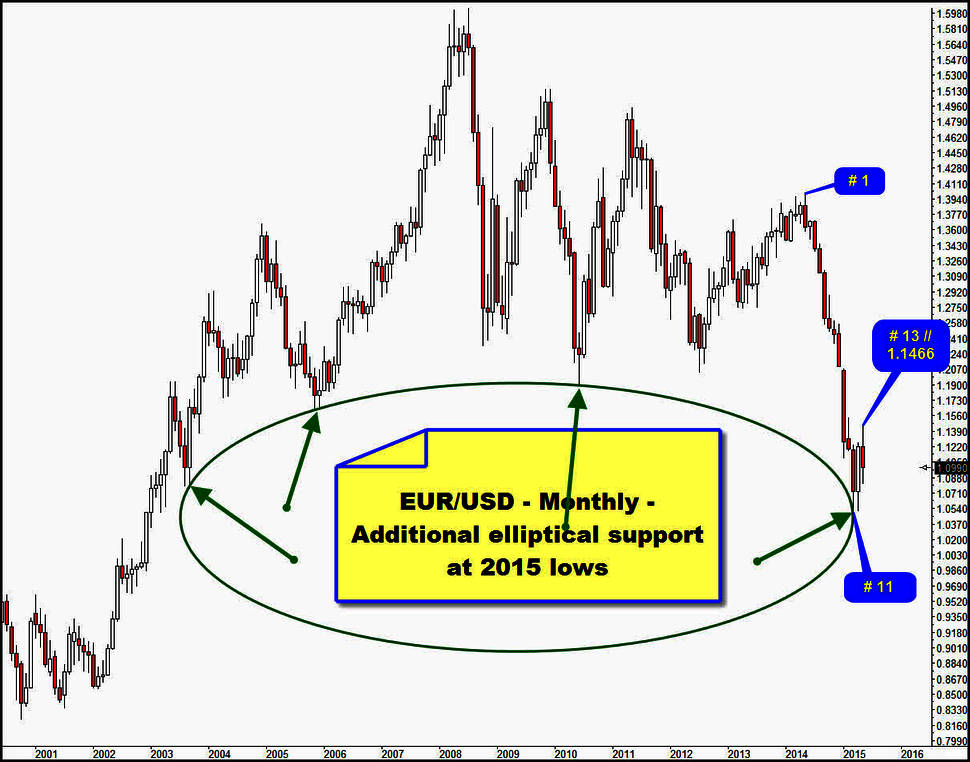 ==> All in all, by a quadruple decade support at the low of the # 11 the pair was simply obliged to bounce!

The May top of the EUR/USD is at 1.1466. As early as mid-March 2015 it was identified as a very important possible countertrend price-high. Regard about this the free GUNNER24 Forecasts of 03/15/2015 and the following chart published there: 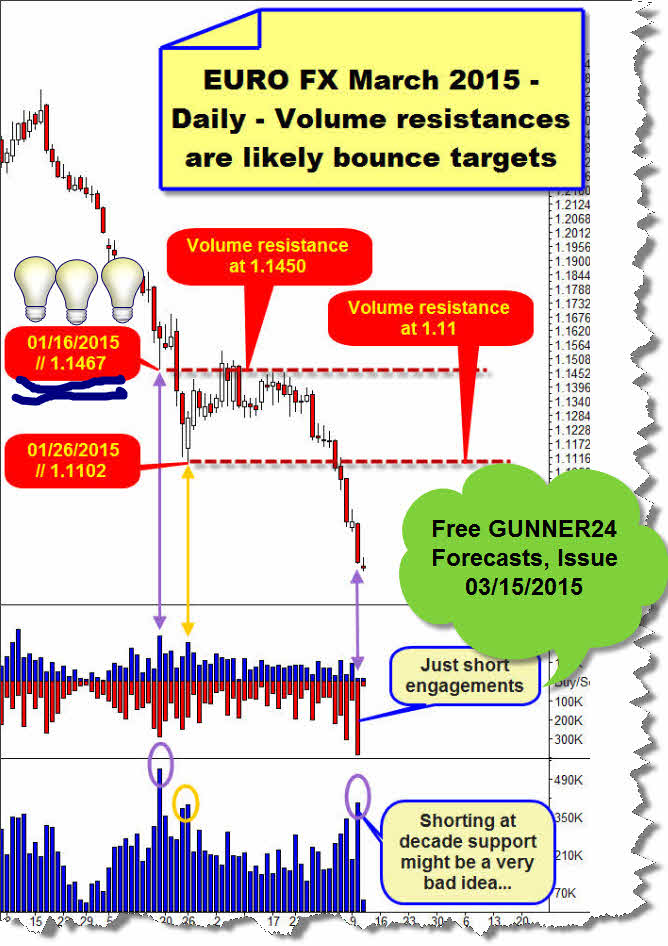 At 1.1467, a important daily low on January 16, 2015, there is enormous volume resistance in the Euro FX continuous contract. On this day, the second highest trading volume of the year 2015 was achieved! – Only on the day of the current 2015 low, some slightly higher volumes were traded!

Let’s keep on interpreting now the development from the # 11 low up to the # 13 high.

The day of the 2015 low (# 11 low), the pair met important decade support starting to bounce from there, backed by the volume till it came upon important volume resistance on the day of the May high (#13).

That’s why we certainly have to work on the assumption that a significant countertrend high was marked at the high of # 13. Hence, in succession – i.e. the next couple of months – at first the lows of # 11 will have to be tested. They are not likely to hold…

The high of # 13 met resistance at the currently most important selling-wave resistance! ==>:

I overlaid a down setup starting at the highs of # 1. The down setup is not adjusted correctly. This technique helps us to identify the currently reigning main resistance of the panic cycle: 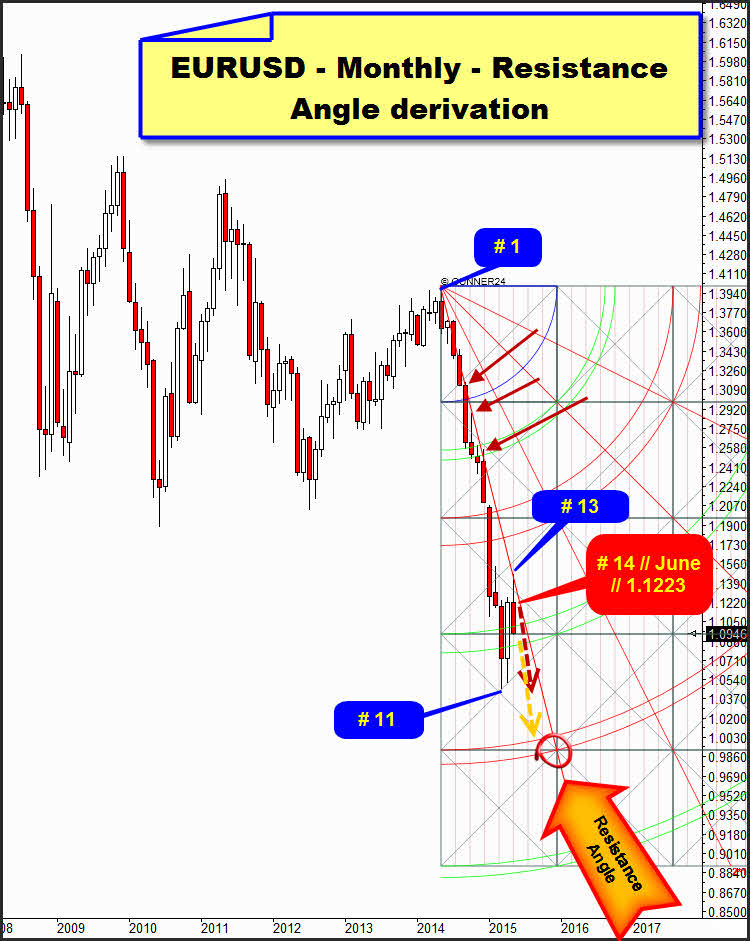 Concretely, that means: The panic wave is supposed to come to an end between December 2015 and February 2016, because in this period the turn will be due as to the Fibonacci- Numbers technique.

Please trade the marvelously defined resistance of the Resistance Angle in the coming month. In June, it takes its course at 1.1222. The opening price of # 13 "happens" to be at 1.1223…

In the daily time frame, the situation of the pair is improving again. The 1.1222 may be respectively should have to be headed for within the next two weeks!

The downtargets of this panic cycle

Let’s use now the existing information together with the GUNNER24 Technique to establish the downtargets according to the price.

At the all-time high (2008 ATH). The valid down setup in the monthly time frame starts. It scales 4 candles initial down impulse beginning at the 2008 ATH. The panic-wave start (# 1) is on an important time line (orange dotted vertical). This condition is signaling an extremely important top at # 1: 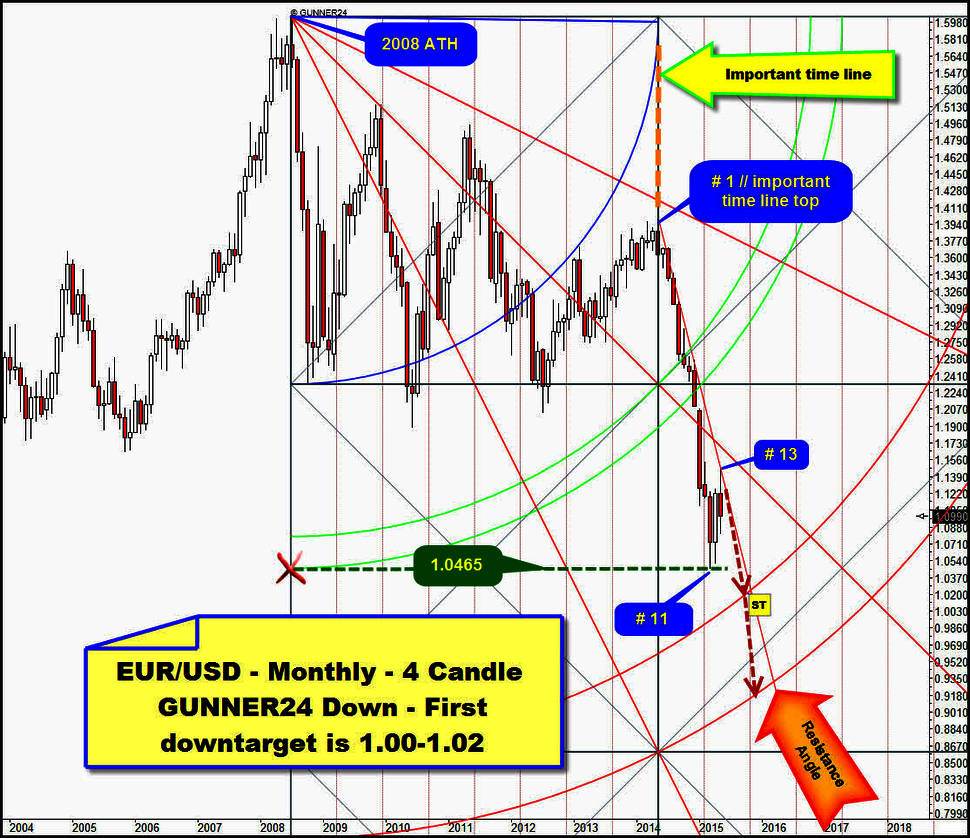 The panic wave broke the support of the 1st double arc. Thereby a touch with the upper line of the 2nd (= first downtarget at 1.00-1.02) double arc is to be expected with a probability of more than 75%.

To a T, the low of # 11 is at the 1.0465 GUNNER24 Horizontal that springs from the intersection point of the lower line of the 1st with the beginning of the setup! I.e. the low of # 11 is linked with the ATH perfectly mathematically and thereby harmonically. The pair was simply obliged to bounce at the low of # 11! As outlined above, the countertrend is supposed to reach the Resistance Angle now, afterwards newly becoming prevalent and stronger the sell-off dynamic until the upper line of the 2nd will be reached at 1.00-1.02!

The GUNNER24 First Downtarget conforms to the 2008 Support: 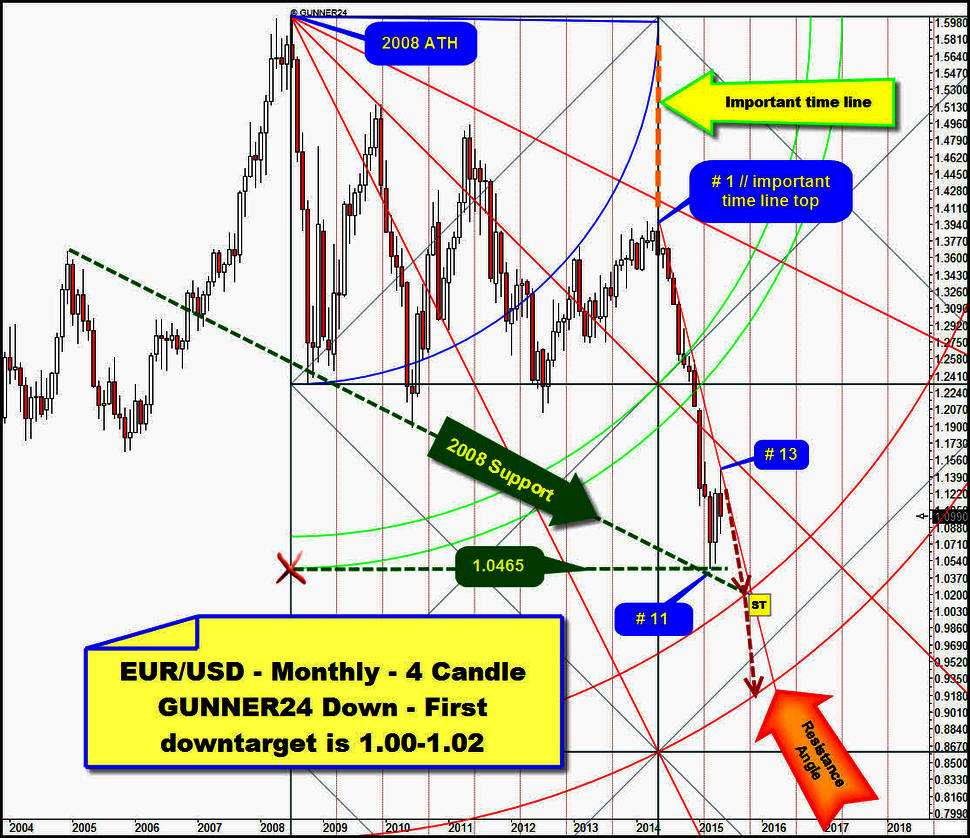 ==> If the low of # 11 is fallen below, the 2008 Support will "have to" be tested again. Of course, ideally the month of October 2015 is offering itself at the intersection point with the upper line of the 2nd at about 1.01. Here, there is an incredibly strong down magnet, newly linked mathematically directly and harmonically with the 2008 ATH…

The answer is given by the existing elliptical decade support that we integrate now harmonically = in mathematic terms correctly into the GUNNER24 Down Setup: 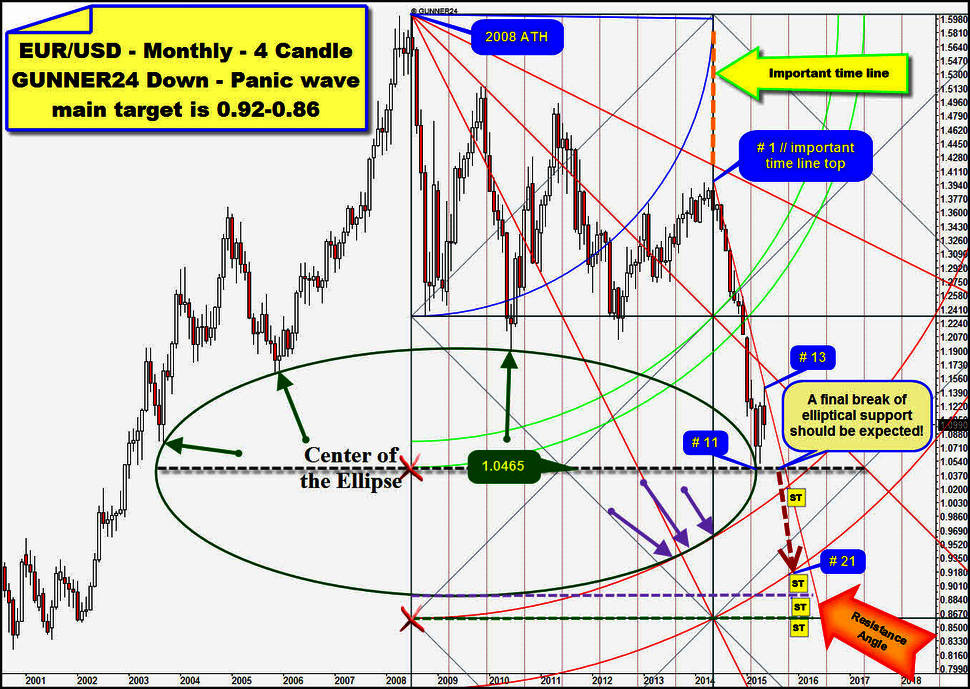 On the one hand, the support ellipse is defined by the lows at the green arrows, and on the other hand, it bears on the upper line of the 2nd (purple arrows) GUNNER24 Support Double Arc.

==> The center of the ellipse = 1.0465 is blatantly important future horizontal support for the pair!

==> The center of the ellipse is absolutely equivalent with the 1.0465 GUNNER24 Horizontal starting from the intersection point of the lower line of the 1st double arc with the beginning of the setup.

==> The main target area of this panic wave begins thereby at 0.92 (lower line of the 2nd double arc) stretching down to the 0.86 (GUNNER24 Horizontal starting from the upper line of the 2nd double arc). Rather exactly in the middle of the 0.92-0.86 GUNNER24 Target Zone, at about 0.8870 the lower end of the ellipse support is situated that will be finally activated as downtarget and thus being supposed to be reached in this panic wave as well in case of the center of the ellipse being broken.

There’s one thing that has to be clear in each investor’s mind on this side and the other of the big pond: If the low of # 11 falls – it will be fallen below with nearly an 80% of probability, soon… - we will just have a new confirmation that the monetary watchdogs/politicians are absolutely unable to come to grips with the present Euro crisis.

Heaven helps those who help themselves, dear GUNNER24 Fans: Now then massively into the stocks if the low of # 11 INDEED is fallen below. Short Euro, long US$. In addition, the Europeans will have to invest severely in Euro-gold and Euro-silver in that case in order to catch the Euro devaluation just rudimentarily!