Last Friday, the markets were touch and go - GUNNER24 says NO

I would say, the markets only just got away last Friday. Without the rise during the last half hour of trading, I would have adjusted my opinion to the general bearish howling a little bit. But it isn't done yet, folks. GUNNER24 says NO. The GUNNER24 teaches us that on weekly basis at first we should develop a triangle formation which first of all indicates a continuation of the trend, seen from the chart technical point of view. It is giving rather good reasons for a new year high than a relapse into the Stone Age. All the same, we will have to be prepared for the markets to break on weekly basis since all the important indicators and oscillators are on sell.

The situation: The S&P 500 and its corresponding future contracts produced some new May lows on Friday whereas the Dow Jones and the NASDAQ-100 defended the 05/06 lows with their future contracts as well. Read more on that situation below. The prognosticated course of the week proved true to a great extent. Finally, in the S&P 500 the price decline was stopped by a Gann Angle. Certainly a little lower than expected, but for next week, the traffic lights are green first, with an up target of about 1115-1130. Then we will have to see whether the price can break the upper 3rd double arc significantly. The only thing which bothers me in that forecast is the candle count. Friday was only the 19th day of the down swing. Actually, on the 21st day a significant low should turn up. So the 21st day might produce a significant high which would seem to indicate a new significant low on the 34th day of the down swing.

These two GUNNER24 Up Setups both show us that on weekly basis we might run into a triangle. 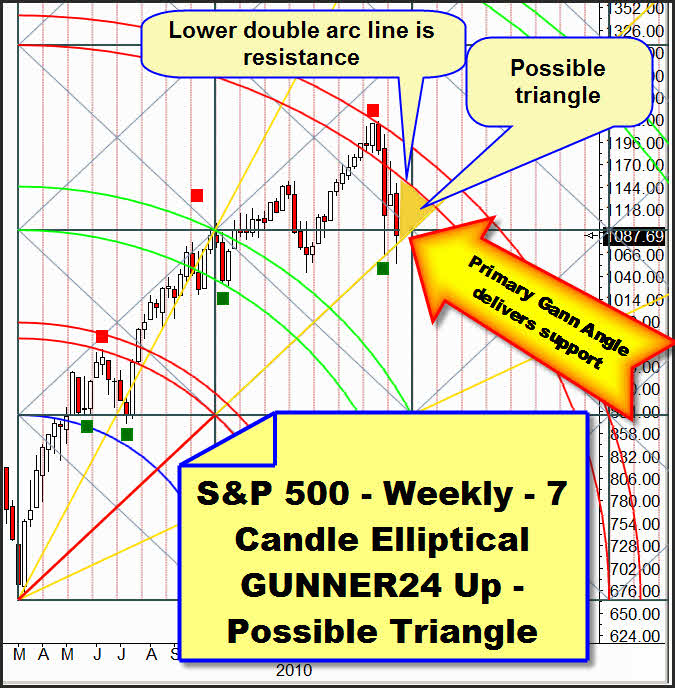 This 7 Candle Elliptical Setup that was presented as early as in the GUNNER24 Forecasts, Issues 05/16/2010 and 05/09/2010 keeps on giving us a beautiful forecast. Without the Friday closing rise the S&P 500 would have closed underneath the primary Gann Angle. The fact that it only just escaped above it also proves the importance of that Gann Angle. It keeps the rally working! As long as the price is above the Gann Angle we will have to think bullish. Not before a significant break of that Angle we will change to the short side! We won't have to reckon on a significant break before the third test of that Gann Angle.

Also the FDAX # contract seems to run into the triangle on weekly basis. All in all, here the week proceeded a little more relaxed than in the US markets. The primary Gann Angle was not even touched to be tested. Here, even the horizontal square line that is lying below the week closing at 5840 seems to crystallize into a support!

Before we finally deal with the NASDAQ-100 which is the metronome of the rally that began in March 2009 let's have a look at the monthly situation of the Dow Jones: 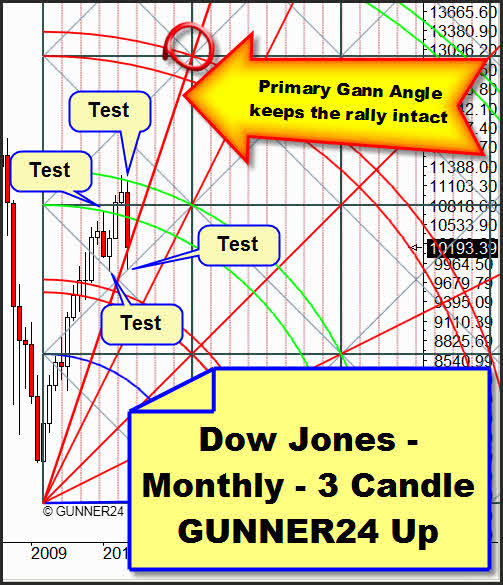 The situation: We can see very well how the market is respecting the important points within this setup, testing them. With the Friday closing the market maintains its rally ambitions because the price is parking above the primary Gann Angle. The next trading week is going to become accordingly important. If by the end of the week there are emerging new lows we will assume that the primary Gann Angle will break, activating therefore the 9250 as to be the target for June 2010 (upper line of the first double arc). If the next trading week is extremely positive closing at let's say 10500, I will assume a smashing continuation of the rally because in that case June will open above the primary Gann Angle again. If next week is rather flat then June will open underneath the primary Gann Angle. In that case, the 9250 would be a "normal" target for the month of June without endangering the general upwards trend.

To the NASDAQ-100 and its two actual GUNNER24 Setups on daily basis now:

We can see the following: Friday seems to have produced a higher low. The contract rebounded there, exactly on the important time line relatively impressively from the 4th double arc. Since Thursday did not close within the 4th double arc at least a three day rally with target 1870 should develop. From my point of view really interesting is the fact that the NASDAQ-100 has really defended its lows of 05/06/2010 so far. The S&P 500 hasn't. For me, the question is: Which market will determine the rhythm for the near future? Certainly you can imagine the answer. I think since up to now it has been the NASDAQ-100 so the NASDAQ-100 should keep on being the one. Evidence for it is the way that market is strictly respecting the present GUNNER24 Down Setup. Maybe in the NASDAQ-100 there is no "manipulation" at all and the mass can develop the natural market rhythms without "disturbances" and independently from the Big Players... 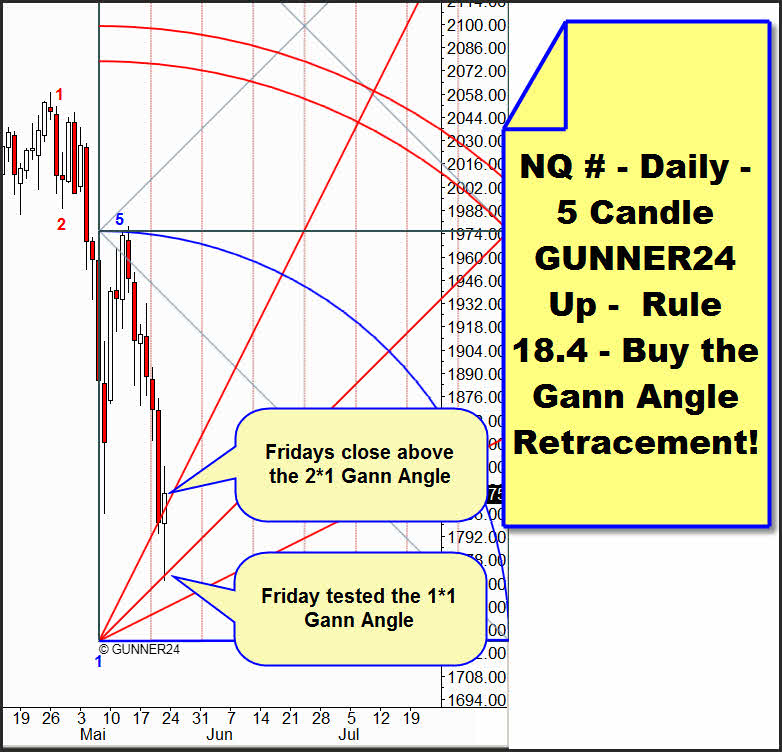 In the actual 5 Candle GUNNER24 Up the more aggressive traders could have entered into an aggressive 1*1 Gann Angle buy at the day low. We are waiting for a possible Monday reversal candle and the "safer" long entry according to rule No. 18.4. Depending on the duration of the expected price rise, a total of  three, five or even eight days, beside the 1870 target even a target of 1900-1920 is possible. In day trading we'll switch to short if the 1*1 Gann Angle on daily basis is broken.

Rarely I had received so many E-mails on the actual gold price development as I did last week. Buy? Sell? How low is it going yet?

On Tuesday at the latest when the Friday low of 1217 was fallen short of it was for sure that the scenario No.2 would happen:

On Tuesday and Wednesday we still traded long at 1206-1208 taking along the quick up reversals. On Wednesday gold was sold during the whole day, and the important support at 1206-1208 broke, automatically releasing our SL at 1200.8. We covered the triggered shorts with the week closing since I assume that the down swing has come to an end so far (there is a new 5 Candle GUNNER24 Down Setup, see the chart). Within the GUNNER24 Forecasting Method there are many important rules to be considered. But the most important one is still setting the SL with the reverse and double technique. Because in case the signal is denied in the further course after defining a short or a long entry respectively you can really be very sure that the denial will be very strong. Thus, actually you will still make a little profit out of the whole event.

An advanced technique in the weekly time frame shows the way I see the further course in gold: 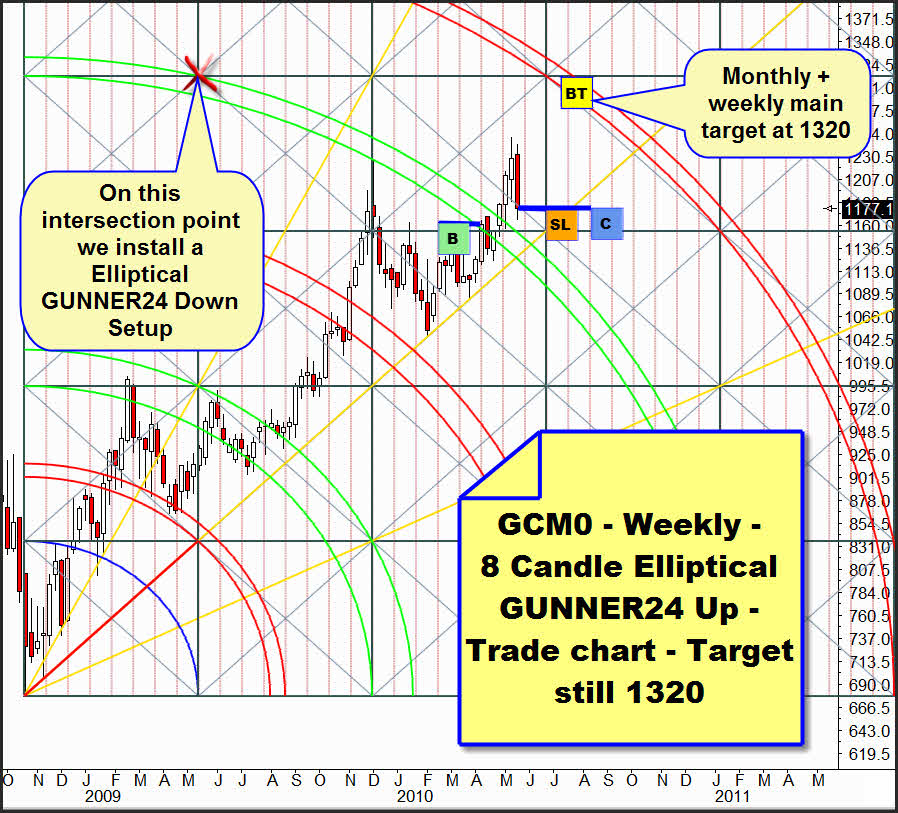 The situation: The 4th double arc was broken upwards by the end of April. By that, the last target of that upswing was activated at 1320. Last week nothing really happened to question that target. From my point of view, gold just tested the square diagonal at the price or maybe it wants to try testing the 4th double arc. The actual monthly GUNNER24 Up Setup is showing the same target. Look here... With the week closing our SL was released automatically. The longs were covered. But we are not entering into short positions yet. Why so?

Please pay attention to the intersection point in the upper chart. That's where we install a new GUNNER24 Down Setup. 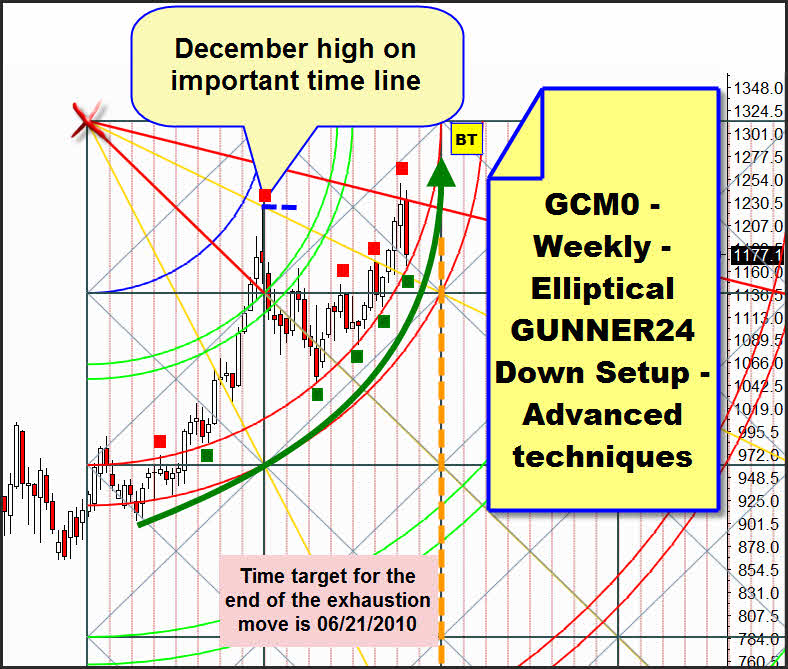 Can you see what I'm seeing? We install an Elliptical GUNNER24 Down at the mentioned intersection point and we recognize that gold is defining at the green square week lows which undoubtedly follow the upper line of the 2nd double arc. At the little red squares we recognize how gold respects this setup at the resistance points. The two uppermost red squares are the most important ones. On the one hand the December high is lying exactly on a time and price magnet. Furthermore, the upper Gann Angle stopped the price rise of the last two weeks causing a violent retracement. All in all, we can trust this setup absolutely because the price is following the setup really exemplary.

By traders for traders. Our eBook GUNNER24 Trading Setup Examples shows you more than 200 GUNNER24 trading entries in a detailed way. It is focused on the real and practical trading with the GUNNER24 Forecasting Techniques! Never published before. Order now!

Therefore my prediction: Actually gold should follow the 2nd double arc upwards through the 06/21/2010! Target 1320!

That prediction will be denied if as early as Monday or Tuesday we produce a low that is lower than the Friday low. Then at first a down target of 1140 is to be expected. But in the ideal case the Monday low is at about 1172 defining the week low there. And gold should rise during the whole week. That would be another evidence for this exhaustion move. Accordingly, our tuning is going to remain long. Not before a price of less than 1166 we will switch to short!